SCREENING AND CONVERSATION: WHAT IT TAKES TO MAKE A HOME

What does it mean to live in the city without a place you can call your own? What role can architects have in addressing homelessness? And how can cities become a better home for all? The documentary film What It Takes to Make a Home follows a conversation between architects Michael Maltzan (Los Angeles) and Alexander Hagner (Vienna), who have been grappling with these questions over many years and through various projects.

What It Takes to Make a Home  (29 min, first in a three-part short documentary series, produced by the CCA) is screening online on Facebook and YouTube, on 26 November, at 2pm EST, and is followed by a live panel with Charlotte Biddle-Bocan, Edith Cyr, and Maya Cousineau Mollen, and moderated by Bruno Demers, Director of Architecture Without Borders Quebec, where they will discuss issues of urban hostility, homelessness policies, and recent events in Montreal.

Screening of the film, followed by a live panel with Cristina Cielo, Juha Kaakinen, and María Inés Plaza Lazo, and moderated by Giovanna Borasi, Director of the CCA, will consider responses to homelessness coming from the Global North and Global South, and their implications for the role of the architect. 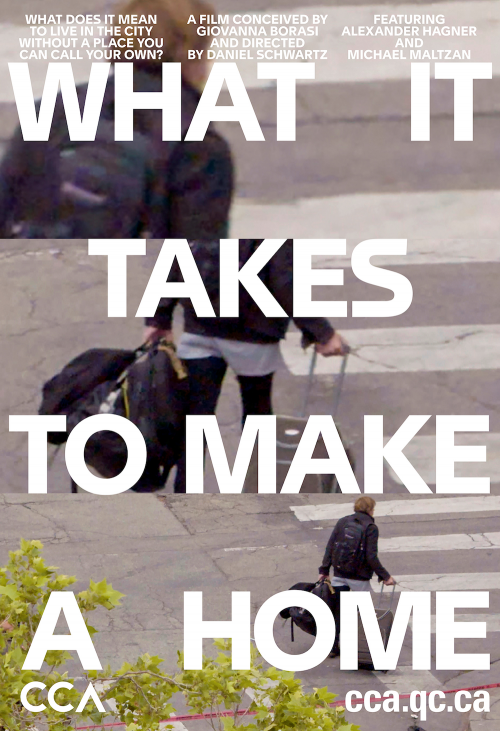 What It Takes to Make a Home (2019, 29 min) is a short documentary conceived by CCA Director Giovanna Borasi and directed by Daniel Schwartz. It considers the role of architecture in addressing housing insecurity—not through proposed solutions, but through multiple perspectives, including those of both architects and individuals whose lives have been affected by homelessness. It uses Alexander Hagner’s VinziRast-mittendrin housing project, in Vienna, and Michael Maltzan’s Star Apartments, in Los Angeles, as ways to enter and to turn over the question.

The film is the first in a three-part series that casts new light on how architecture intersects with wider social, economic, and political contexts reshaping urban life. The series aligns with an institution-wide set of initiatives, collected under the title A Section of Now, that explore the urban and architectural interventions that accommodate, influence, and even pre-empt our contemporary realities.