Investigating the politics of circulation of images cannot happen without their visible reproduction. In addition to that, appropriation and collaboration are fundamental to such investigation, at least from Willem De Rooij’s point of view. His upcoming exhibition at Portikus in Frankfurt am Main, Pierre Verger in Suriname, aims to intervene in the fossilised disciplines of art history and ethnography, avoiding didacticism and problematising colonial methods of visual categorization.

The exhibition has at its centre a collection of 257 images made by the French photographer and ethnographer Pierre Verger (Paris, 1902–Salvador da Bahia, 1996) during his eight-day trip to Suriname in 1948. Verger’s historical work on the slave trade and the West-African diaspora in North-Eastern Brazil earned him a doctorate from the Sorbonne, a title which he barely used, and his photography ended up in a world-touring, yet heavily critiqued 1955 exhibition The Family of Man.

Photographs are, as visual cultures studies and media studies remind us, not just a reflection of the world, but productive of it. An amorous investment in the non-European subject is never an innocent affair. De Rooij’s constellation of appropriated images addresses ethnography’s heavy reliance on visual classification, taxonimization and epistemological production, while at the same time suggesting that Verger’s images transcend the mere portrayal of “the other”, and (at least attempt to) engage in forms of learning and studying with people in one's proximity.

The reuse of existing photographic images has been a staple in artistic practice since at least the 1970s, but one could alternatively trace it back to cubist collages. Despite the very diverse (and often incompatible) relations between such artistic gestures, there is arguably one thing that binds them together: to recontextualise a photograph is to expose it to its afterlife and to emphasise the potential for circulation, inherent to this medium. Most importantly perhaps, appropriated photographs point to the contingent nature of photography and to its social, historical and economic materiality.

The image of a mass on their way to a Lucha Libre show refuses to impose itself forcefully, instead remaining a fleeting reminder of the unresolved past anchored in the present. 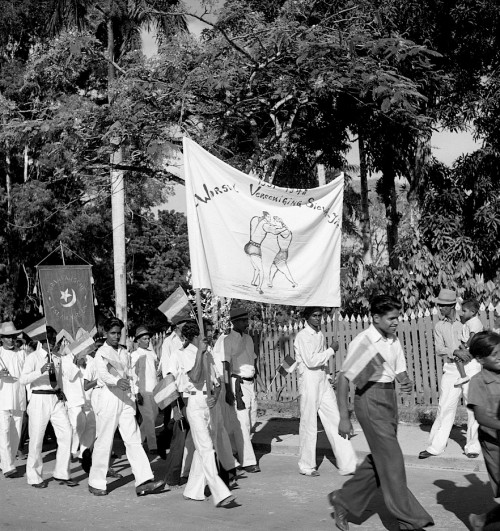