“Every historian of the multitude, the dispossessed, the subaltern, and the enslaved is forced to grapple with the power and authority of the archive and the limits it sets on what can be known, whose perspective matters, and who is endowed with the gravity and authority of historical actor,” Saidiya Hartman writes in the introduction to her book Wayward Lives, Beautiful Experiments: Intimate Histories of Social Upheaval (2019).1

The conceptual foundations of the archive have been challenged time and again (see Achille Mbembe, Jacques Derrida, Michel Foucault, and all those lads…) as an objective and authoritative institution, as a colonial project, and, ultimately, as a fabrication: an imperfect and biased construction of the past maintained for the purpose of reinforcing the production of (most often Western and Eurocentric) knowledge as power in the present.

To reflect critically on the significance of archives as such is to ask two perhaps rudimentary questions: for and by whom are archives constructed? The answers to these questions are not just a reflection of our cultural identity and values, but also of blind spots and neglect. By recognizing and filling in these gaps, there’s a potential not just to imagine but also to manifest new identities, relationships and realities. Our relationship to history can confirm what has yet to come, as Derrida rightly claims: “[…] the question of the archive is not, we repeat, a question of the past. […] It is a question of the future, the question of the future itself, the question of a response, of a promise and of a responsibility for tomorrow.”2 Staying true to her signature approach of “critical fabulation”, blending research, theory, and fictional narratives, Hartman negotiates her response to archival gaps and silences with the idea that history can be written for and by the many, not just the winning few.

Wayward Lives is a deeply researched yet imaginative study of wayward Black women in Philadelphia and New York at the turn of the twentieth century. Weaving together historical documents such as police reports, sociological surveys, trial transcripts, and photographic reports of slums, Hartman tells stories from the peripheries of the archive’s refuse. Stray court documents here, a single news clipping there: the resulting assemblage becomes representative of the larger experience of the lives of Black women who, just a couple generations removed from slavery, “made a way out of no way” in the cities of the north. Abandoning the dispassionate and clinical gaze of official records in favor of lyrical representations of resistance, Hartman steals back the narrative to reveal the stories of multidimensional, intuitive, and whole people. Whether through migration, work, performing, or screaming, the women Hartman centers embody the social and cultural innovations typical of defiance and refusal.

There is power in stories told in solidarity with the multitude. Hartman’s method of close narration, “a style which places the voice of narrator and character in inseparable relation,” effectively blurs the subjectivity of distinct roles in favor of a new, constituent perspective.3 This is further articulated with the enlisted help of the Greek chorus, a theatrical device represented as a homogenous, non-individualized group of commentary-providing actors. With utterances from the chorus indicated by italicized lines and phrases, Hartman defers to a collective voice speaking in solidarity with the main characters, providing an opportunity to access and listen to the silences of historical record.

From antiquity to the present, the role of the chorus as a dramatic device has shifted alongside cultural values. Over time, as characters became increasingly individualized with their own agency and perspective, the chorus, represented by a collective spoken effort, fell into relative disuse. The modern tragedy took on a new form as the joy and suffering, the pleasure and pain of the individual took precedence over that of the collective. This is not so in Wayward Lives: “This story is told from inside the circle.” Through simultaneous blending and oscillation between sympathetic subjectivities — of the author, narrator, characters, and the chorus — Hartman channels solidarity into her narrative voice, tying together critical connections between historical and contemporary experience which open up some intriguing potentials for the future.

The stories we tell ourselves are often the most convincing, even more so when we tell them together. From the perspective of the artist Alina Popa, whose incurable disease meant she needed a miracle, perhaps even an impossibility, to survive, making an art of living became a means for negotiating new potentialities for the future. “Perspective creates reality,” says Popa, “To change the standard perspective is almost impossible. It cannot be done mentally, it needs different practices—to practice ways to interact with the world that give back multiplicity to reality.”4 The fabulations and reimaginings of Wayward Lives are not revisionism but possibility. And they call upon and respond to a much longer Black oral tradition of storytelling as social and cultural survival. Critical fabulation as a practice not only reacts or responds to the past but could also help us to reimagine a future shaped by collectivity. From a perspective of multiplicity in storytelling comes the chance to envision and (re)write the future, even in direct opposition to the forces that define the present.

Following Hartman and Popa, to recognize living as an art is to honor it as such, recognizing “the revolutionary ideals that animate ordinary lives,”5 as Hartman says. Engaging with the everyday, the pedestrian, the fleeting and transient is an approach to art, life, and indeed research that acknowledges the radical potential and substance of the ordinary to give shape to the multiplicity of reality. As wayward lives meander through crowded slums, dirty streets, dark alleys, and back rooms to negotiate the struggles and triumphs of the everyday, they simultaneously give life to new possibilities. But as confronting often troubling realities, past or present, requires vulnerability and care, Hartman reassures us: “In a moment of tenderness, the future seems possible.”6

This contribution is part of Issue 15: DECOLOMANIA, on art history, the history of politics, and the history of theory: all of them colonized and colonizing, much like our very selves. 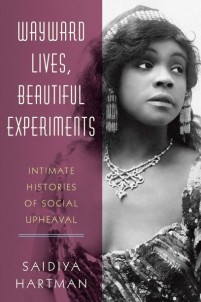