„Workers of the future, unite!” exclaims a cheerful text on a corny, festive ribbon attached, as if a tail, to a delivery drone holding a cardboard box (Workers of the future, unite!, installation, 2021). This pompous call (addressed to either robots or humans) greets the viewer at the start of Tytus Szabelski’s AMZN. The abbreviation clearly refers to stocks of the megacompany Amazon, a business synonymic to hyper capitalism and the core theme of the show at Arsenal Municipal Gallery in Poznań.

The exhibition is a further development and a material expansion of Szabelski’s previous investigations into the corporate culture of Jeff Bezos’ empire. “For few months now, I have been working on a project that tries to investigate how Amazon operates in Poland. I am generally interested in showing how digital capitalism, apart from its seemingly immaterial character, is shaping our lives, social relations and the surface of the planet. Probably most of us perceive those huge tech companies exclusively via their screen interfaces.” – says the artist in an introduction to AMZN. He continues: „In December 2018, I got hired for a short time at the Amazon fulfilment center in Sady near Poznań to see from the inside how one of the biggest companies in the world operates on a micro scale. In this way, I started working on the AMZN project, whose main aim is to shed light on the entire functioning of this internet giant: from the materiality of huge warehouses, to working conditions, to specific corporate culture and versatility, to visions of the future, created by the company management.” 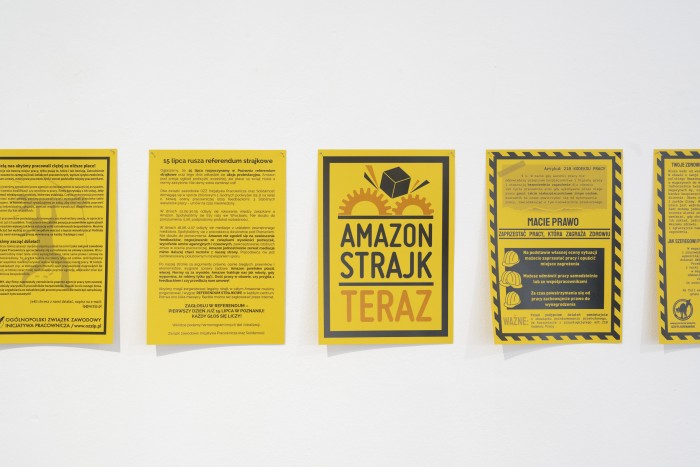 Szabelski’s research and experience morphed into an elaborate online chronicle of Amazon–related testimonies. „The website you are on has been conceived as a regularly updated and ever-expanding online archive. It collects scattered scraps of information that make up the overall picture of Amazon. Much has already been said and written about it, but there was no single place where you can get to know a wide range of material in this way”. The effect of adopting such a methodology – a combination investigative journalism with oral history - resembles a rhizomatic encyclopedia, where every piece of information is offered the same amount of exposure. Mimicking the ways of algorithms “curating” information on our screens, the contents of the AMZN archive are „arranged randomly, just like products in Amazon fulfilment centers.” The homogenous typography of the subsequent statements – sourced from daily newspapers, interviews, podcasts, academic analyses, private conversations and corporate leadership manuals – gives every source the same factual weight and unifies the testimonials’ credibility and cognitive gravitas.

"The exhibition might also be considered as a rumination on the limits of empathy and access to  other humans’ experience in the post-true world, where mediation reigns supreme."

The AMZN online archive has no fixed route to follow. Browsing through the many testimonials one will not discover a single objective reality behind the corporation - the multitude of voices gathered by Szabelski allows the viewer to approach it, but not grasp it fully. All that is accessible is an approximation - a proof that something finite can be divided by an infinite number of times (1). The philosophy behind the online variant of the AMZN project connects it with its physical manifestation in the Municipal Gallery in Poznań. Apart from unveiling fragments of the conditions behind Amazon’s inconspicuous halls, the exhibition might also be considered as a rumination on the limits of empathy and access to  other humans’ experience in the post-true world, where mediation, (especially in current conditions of forced isolation) reigns supreme. 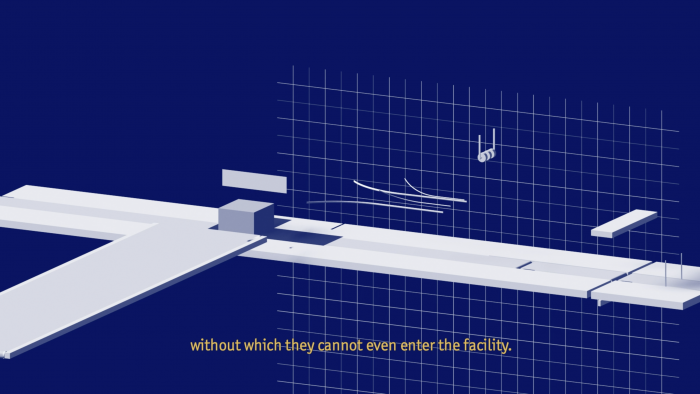 The main room of Arsenał Gallery houses three works which can either be considered individually - as evidence of corporate culture - but as a triptych as well. The first element presented is a selection of archival material of Inicjatywa Pracowanicza Trade Union, a grassroot initiative, which advocates and actively fights for workers’ rights, improving working and security conditions, higher wages and organizing and initiating strikes. The bright yellow leaflets covered densely with black lettering are arranged in an even frieze and present the key demands of the union. This set, distributed among the employees of Amazon Poland between 2014 and 2020, also showcases the persuasive language applied and creates an eerie contrast with the welcoming statement carried by the drone greeting the viewer. In a text accompanying the exhibition and an informative footnote to the Inicjatywa Pracowanicza’s archive, the activist Agnieszka Mróz writes: “The interest [in Amazon] is growing especially in 2020, when we - employed in logistics - are included in the group of key employees. The public discovers that the parcels are not packed by robots or sent by drones, but by hundreds of thousands of people grouped in huge logistics halls, who continue to work despite the coronavirus. They unload trucks, unpack pallets, count cartons, push carts, place products on shelves, and pack consignments.” (2) Amongst the many consequences of the pandemic, the deceitful illusion of seamlessness accompanying online shopping is shattered.

"Amongst the many consequences of the pandemic, the deceitful illusion of seamlessness accompanying online shopping is shattered."

The third and last section consists of a quartet of monumental panels, constructed of modular steel frames and Amazon’s signature cardboards (A Few Simple Tricks to Improve your work performance #1, an attempt at a motion study of an Amazon worker, photographic installation, 2019/2021). Here, the paradoxical nature of turbocapitalism, discreetly signaled in the previous works on the exhibition reveals itself again: the cardboard surfaces demonstrate the choreography of the process of packing of Mark Fisher's “Capitalist Realism”, into Amazon’s trademark envelope. This elaborate construction contains Lights - out Factory (video installation, 2021) an animated, blue-and-white film busting the myth of effortless, mechanized labor taking place in Amazon’s workspaces. “For years we have been fed a vision of the world, in which only machines work. This is the carrot and stick for workers. A thread that they will have nothing to live on if they are less productive than robots and a hope that they will not have to go to work they hate” – the female narrator starts her tale. The calm and contained voice-over, corresponding with the video’s unhurried, hypnotizing pace, tells stories of both successful and failed attempts of mutual help in one of the fulfilment centers. While the female voice calmly reports on ways the workers support one another, the viewer experiences an animated impersonal sequence of floating parcels, drifting shelves and flat, driverless machines gliding smoothly on the blue surface of the screens.

The trance-inducing audio visual narrative is interrupted by occasional flashes of footage drawn from the company’s official promotional videos. Again, we are reminded, that discovering an ultimate reality behind the fulfilment centers' walls is impossible. Szabelski’s AMZN deliberately ends in an approximation and not a 1 to 1 transfer of experience: a pessimistic, yet reasonable conclusion. Although the artist is well aware that contemporary art might be not enough to wholly understand the world, it is nevertheless a vital and necessary tool in its rethinking. In Poland, a country where the official cultural policy does its best to reduce contemporary creation to either harmless object of contemplation or mere decoration, AMZN takes a significant place in a discussion about the social agency of art.