IN THE BLINK OF AN EYE, EVERYONE UNDERSTOOD

On Carrie Mae Weems. The Evidence of Things Not Seen at Württembergischer Kunstverein.

Swiping through Tinder, Bumble, Grindr, or any other dating app of your choice, one recurring photo will presumably pop up on your bedazzling screen, hosting a deck of images that seem to be mostly impolitically mundane: a random stranger posing nonchalantly inside the Holocaust Memorial in Berlin. In real life, the memorial, commemorating the six million Jews murdered during the Nazi regime, also frequently serves as a children’s playground, yoga studio, or make-out site. It is object of a grotesque fetishization of a genocide. Those people, hunting for dates or an optimized body, may not be aware of the mechanism of fetishization they put in place. It is not individual blindness, but testimony of a societal myopia. 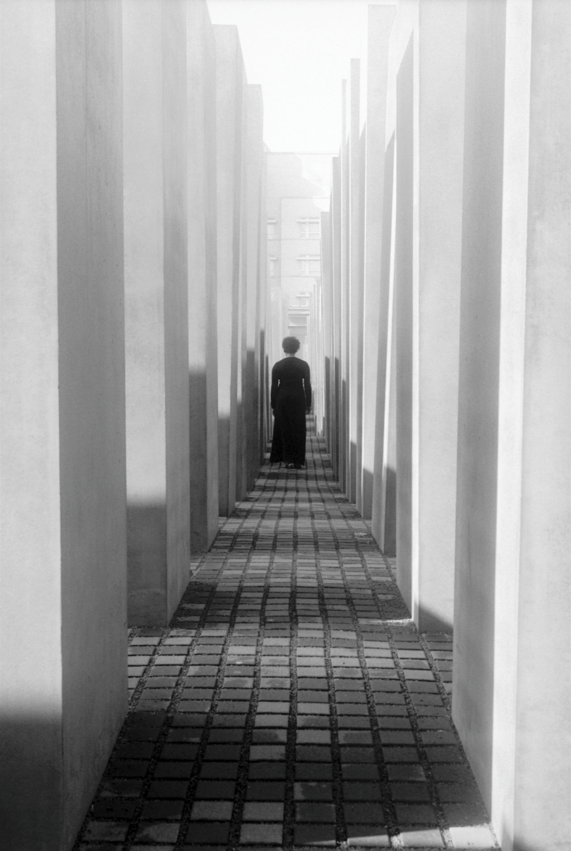 The video Holocaust Memorial (2013), on view in Carrie Mae Weems’ first solo exhibition and retrospective The Evidence of Things Not Seen at the Württembergischer Kunstverein, Stuttgart, Germany, shows the artist staging a performance inside the memorial. Unlike when shot on an iPhone for some kind of social media platform, Weems’ staging is in no way performative in a swipe, like, match way. Weems, the first African American artist who had a retrospective at the Guggenheim Museum in New York in 2014, based her choreography on the memorial’s architectural structure designed by Peter Eisenmann. She ravingly streaks through the pillars’ aisles while moving her flowing arms and hands undulatingly. Juxtaposing her mellow but determined movements with Eisenmann’s rigid architecture states a break not just from a formal standpoint, but an ideological one. The stiff concrete blocks plunging out of the ground allude to the inflexibility of ideologies that ostracize entire social groups. In Weems’ work, the memorial therefore not only represents an egregious genocide, but the memorilization of related crimes, such as other racially-motivated killings happening in our current world, whose fundament is composed of analogous, horrendously inflexible structures as well as structural issues that hide behind the concrete slabs.

The title of the exhibition, which shows an extensive array of photographic projects, videos, objects, and installations, is taken from James Baldwin’s book-length essay “The Evidence of Things Not Seen”, revolving around the Atlanta Child Murders in 1979–1981 and further investigating race relations in the United States. Baldwin’s title as a linguistic phenomenon, an oxymoron (how do you collect evidence of an unseen matter; a matter that does not even exist for certain people?), is akin to the deafening silence of the Holocaust Memorial – or at least the intended silence when there is not a hollering child jumping from one concrete pillar to another. The premeditated absence of writing, as there is no epigraph on any pillar, shall express the victims’ silence.

Weems’ employment of language is decidedly not silent. Several works in the exhibition either include text panels, such as in Sea Islands (1992) or Slave Coast (1993) – two photography series’ that include text panels hung next to them – or have text inscribed on them.

is one of the poems printed on the series of five handmade plates Went Looking for Africa (1992–2012), which she made while scrutinizing the history of slavery and colonialism functioning as sociopolitical institutions. The white porcelain plates also draw upon questions of racism within a domestic realm and how the vestiges of a colonial history are nestled in Black households – and certainly, and much more comfortably, nestled in White households. These vestiges, manifesting as internalized racism, may often not seem as overt, but actively contribute to the reproduction of dated racialized structures. 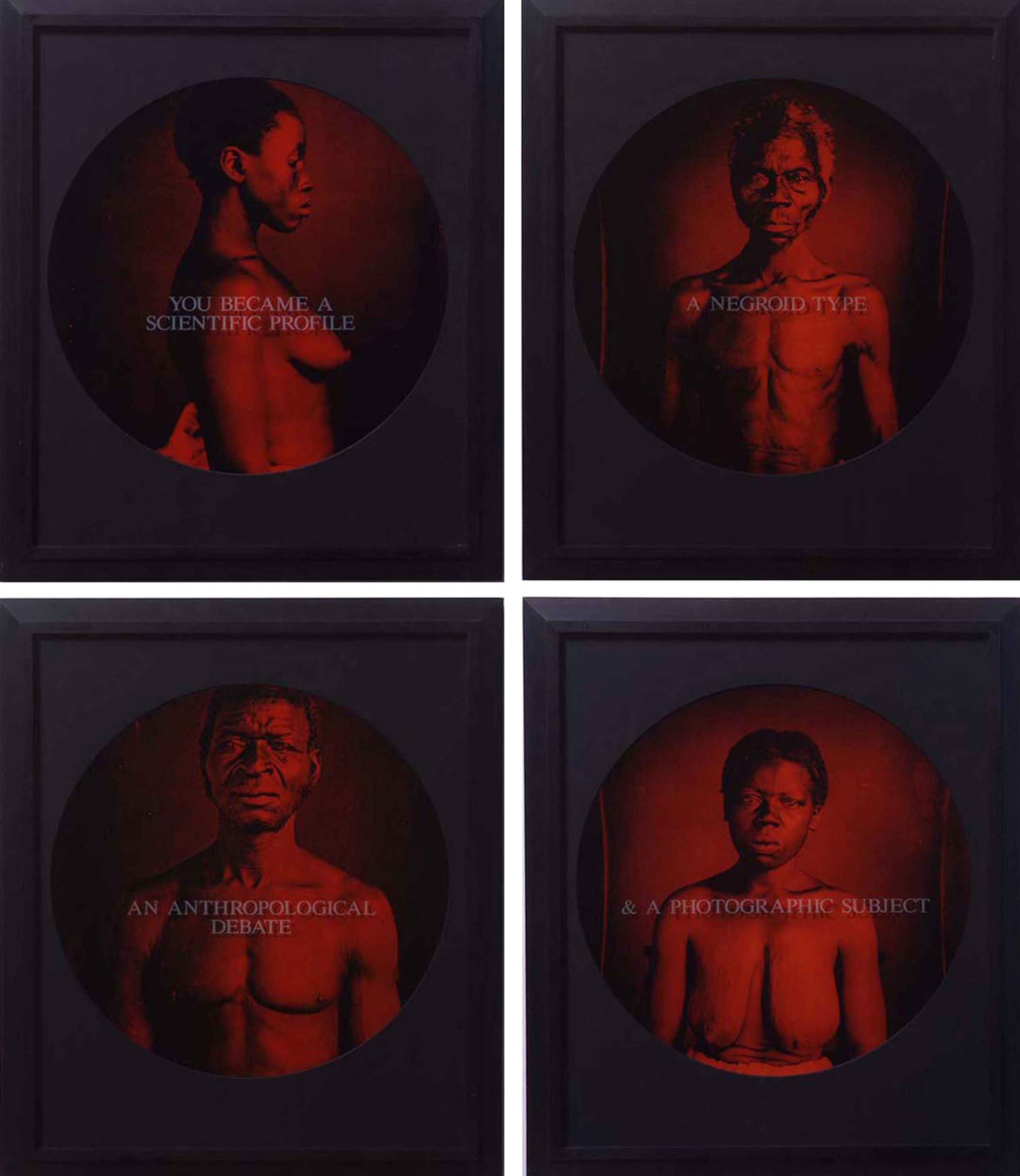 The entire space of the exhibition is divided into several sections, appearing like the floor plan of an apartment. Inside the one-storeyed room, particular work series’ are separated through freestanding walls, alluding to different rooms in an apartment. It is therefore possible that Weems’ work The Kitchen Table Series, hung in the right wing of the exhibition space, is presented in an imaginative kitchen that is part of the apartment where the protagonist of the photography series lives. The work consists of twenty black-and-white photographs and thirteen text panels in which Weems is the main character of a domestic story, literally taking place at a wooden kitchen table. The photographs depict Weems, who began showing herself in her photographic projects in the 1990s, calling her recurring persona an “alter ego“, “muse“, or “witness to history“, sitting together with her daughter, girlfriends, or partner. While some of them are empowering, such as the one that shows her alone, centrally placed at the end of the table with her hands resting on the tabletop and a slight confident smile, all of them seem to be covered with a sticky film made of some kind of gloom, as even the images with an ostensible positive narrative are suffused with underlying anguish. All portrayed people never seem to be truly joyous, having to constantly carry a common Black pain. The artist’s deliberate choice to detach her own persona from the work, while being visually overtly present, might be one way of making the unseen seen. The work’s story is not about her but about the unseen undercurrents enclosed in every Black body. By showcasing her body, functioning as an entity of representation, and insisting that it is not linked to her personal story as an African American woman, Weems reveals collective Black traumas instead of staging a performance of her own biography. Another piece of the series depicts the artist calmly resting at the table, holding a cigarette in her right hand and a water glass filled with wine in her left one, while a female friend is brushing through her hair. It is a subtle allusion to the Western gaze that reserves the right to define beauty – silky long straight hair opposed to “nappy“ short and curly hair. It is further fostered by forms of racialized capitalism  which produce hair straighteners or skin-bleaching creams in order to commodify people of color and have them embody a beauty standard that is rather a castigation. 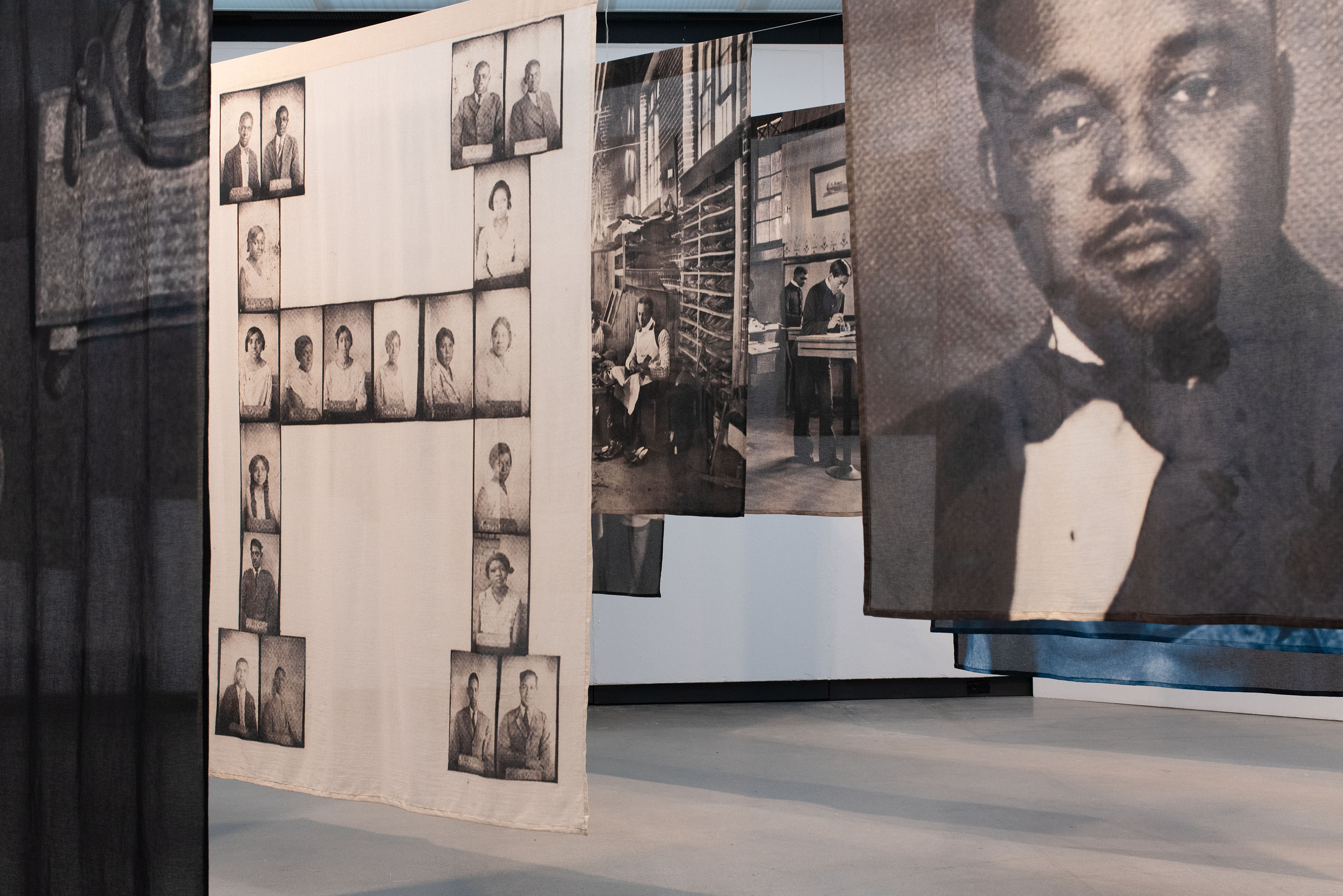 Keep moving through the exhibition space, and the upper-right corner of the room seems to function as the living room, as Weems’ installation Heave: A Case Study (2021–ongoing) shown there intends to intertwine a living room and a classroom. Discernible are armchairs next to school desks as well as a collection of books, including The Prison Industrial Complex, The Battle for Representation, The Skin in the Game, and The Corporate State,  which are the meeting points between private and public spheres, since the books could be part of both rooms. It brings us back to the idea that colonial vestiges, which settled in the realms of politics, economics, beauty, architecture – and pretty much every imaginable sphere of life – are certainly not just a household issue, but also simultaneously should not be disregarded as one.

Weems’ work proposes an osmosis between public and private life, exposing that your casual snapshot inside the Holocaust Memorial on your private Tinder account is not as private as you think. During the exhibition’s press conference, Weems said that “On the day of George Floyd’s murder, in the blink of an eye, everyone understood.“ While some people certainly did, others have archived their black square on Instagram by now. The Evidence of Things Not Seen displays these memorializations of collective pain that have been turned into a forged solidarity currency serving the spectacularization of White crimes.