For and against whom do we stage resistance?

This question is addressed to commodified art worlds, a community of diverse spectators of arts, and those who speak through them. For that, I am humbled to present three series of works by Jonathas de Andrade in AWC's issue no. 23: “Com o coração saindo pela boca”, “A batalha do todo dia de Tejucupapo” and “Olho da Rua”. These series deploy oxymorons, bringing parallel realities – all of them derived from his hometown Recife, Brazil – to the precise moment in which we need to think of the working class not as an order within a hierarchy, but as an energy. An energy that owns itself, simultaneously striking through its cultural manifestations, untying the knots of what seems to be the impossibility of the workers’ alienation, while honoring their dignity, their strength – our familiarity.

The representation of democracy is impossible without a body. Without a body that, in some cases, has been neglected, omitted, invisibilized, categorized, and racialized. A body that is many. And so, “Com o coração saindo pela boca” presents images that are neither metaphors nor categories, yet play with the indexicality of our conditioned gaze. The images spread across this half of the issue are part of the Brazilian Pavilion at the Biennale di Venezia this year. They are limbs of a fragmented national identity that can only be grasped through language in its entirety. Pop art flirts with overdimensional literal translations of colloquial expressions, placed like the body part of the lexical descriptions made by the artist on a low fringe of texts.

These descriptions – here, my favorite, “Sangue quente: ‘He’s really hot-blooded, the sort that stops in traffic to fight, or gets into an argument in the line at the bank, way too stressed” – remain almost invisible in contrast to the images surrounding a third, fundamental part of the show. The video piece “Nó na garganta /Knot in the Throat” is a smashing and quiet type of ecological, surreal film showing young people in sensual and resting poses. The camera follows the slow movements between performers and snakes from a private zoo in Alagoas, where the performers also work. Zooming into their eyes, ears, mouths, armpits, feet, and noses – all of the exits of the body’s fluids – we breathe into the paralyzing moment – fictional – of the performers being poisoned, followed by the death of the planet as we watch burning soil in the rainforest and other environmental disasters – documentary footage – bouncing us back to the first piece we see as we enter: An ear.

To come out of one ear, after we enter through the other / Entrar por um ouvido e sair pelo outro. Will the message fall into oblivion once we go back to our meaningless biennial schedule? Or will it stay with us? Will we look into our responsibility, connecting it with the monumental and pretty literal epilogue to the show when we see it – the world upon our backs/Carregar o mundo nas costas? There’s an affective reality radiating from these pieces. Burning Ear. The images are listening. Bitten Tongue. They are bleeding. They are beating. With the heart in the mouth. Thus, the lexical description below the image of the inflated heart coming out of a mouth opening on the ceiling. “Coração pela Boca” is not rational, but strikingly alive:

“Those who have never felt the heart coming out of the mouth don’t know what it is to shout and feel that this shout (be it of love, hatred, violence, humiliation or passion) dies in the throat, because the heart doesn’t let it leave.” 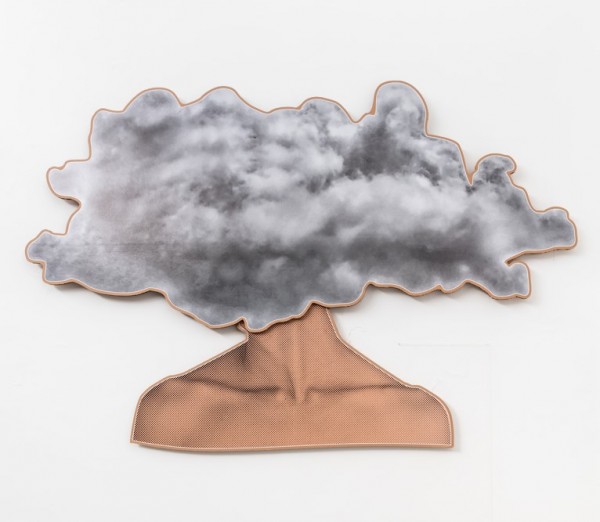 How today’s Latinamerican culture was born out of a racist system where Black, Indigenous, Mestizxs, and European colonizers implemented the economic and social impossibilities we still have to endure today can be understood through the lens of only a short episode of a collective life excluded from dominant historical narratives. In “A batalha de todo dia de Tejucupapo”, a series of blow-ups on cardboard, de Andrades works with a theater group that has been staging the 1646 historical Battle of Tejucupapo in Pernambuco, Brazil for the last 30 years. In this battle, the women of the village fended off an army of Dutch soldiers using sticks, pots, boiling water, and everything in their hands as weapons.

This inventory of objects is multiplied by de Andrade to tell us about the daily struggle of many invisible fighters, connecting the battle from the 17th century to this one symbolically and historically. The objects don’t seem dangerous, yet they loom with the undercurrent of resistance: Every monochair and every vessel can be charged with the remembrance of this heroic act of defense against a seemingly stronger force. The Tejucupapo Heroine’s Theater keeps alive the flame of the struggle against oppression and the defense of the land, taking the perspective of these women – particularly Black and Indigenous women in Brazil – and inspiring other social struggles fought in the tense Brazilian political context.

In order to transform the entertainment industry that instrumentalizes art workers, Jonathas de Andrade enters an emancipatory process, pursued together with workers, activists, and people on the streets of Recife, in Northeast Brazil. Its ultimate aim is to find other ways of surviving the living hell that it means to the majority of humans on this planet to remain in a position of powerlessness. De Andrade works mostly collaboratively. To keep it fair, and politically active, he evenly splits – now that he can, with the support of the mega-galleries selling his works to major collections – the revenues with the people he depicts and brings into his projects: One-third goes to the galleries, one third to his studio, one third to the communities. I think it’s quite remarkable how he avoids becoming isolated in privilege, which is one of the risks of riding the dragon of the art market. Approaching issues of colonization that mark the lack of education, racism, and sexism in Brazilian society allows the audience and the practitioners involved in this process to imagine, with de Andrade, otherwise. What can our role be in decolonizing history, politics, and practices of inclusivity and exclusiveness in the pursuit of the deliberation of rights and privileges given to and kept away from people? The objects and expressions of his portrait of actresses put us in incessant negotiations with words and images. It gets us closer to people, their memories, their language, their distances and proximities, amidst the joys of his precise contextualizations.

In the old Ospedaletto of Venice, the Fondazione In Between Art Film shows de Andrade’s “Olho da Rua” as part of the group show Penumbra. In it, the square Praça do Hipódromo in Recife turns into a stage of precarity, of houselessness, and of vacancy. “Olho da Rua” (Out Loud) is divided into eight acts. It comprises performance proposals in front of the artist’s camera, such as admiring oneself in front of a mirror, improvising an assembly, and uttering messages to the camera. De Andrade manages to transform this site of the marginalized into a feast. In this manner, the centerfold of this issue celebrates a splashing moment of people associated with public shelters, non-governmental initiatives, and the most vulnerable population. Through de Andrade’s work, we might see spaces which allow us to interact with and listen to oppressed narratives and experiences through shared human needs, like play and actions or through gestures of mutuality.
*

Jonathas de Andrade was born in Maceió, Brazil, in 1982. He lives in the north-east of the country, in Recife, a coastal city rich in contrasts, where old colonial buildings nestle amidst modern skyscrapers, and where the failure of the tropical modernist utopia is a tangible reality. Anthropology, pedagogy, politics, and morals are fields drawn by de Andrade in order to explore the paradoxes of modernist culture in Latin America. The architecture, the images, and the texts he creates gather and recompose an image of a society that has lost its ideals, yet which are still embodied, in the contemporary mental and material landscape. De Andrade’s installation Com o coração saindo pela boca (With the Heart Coming Out of the Mouth), Brazil’s presentation at the 59th International Venice Biennale, suggests that the path towards “representing” Brazil today inevitably passes through the body. It’s on view until November of this year.