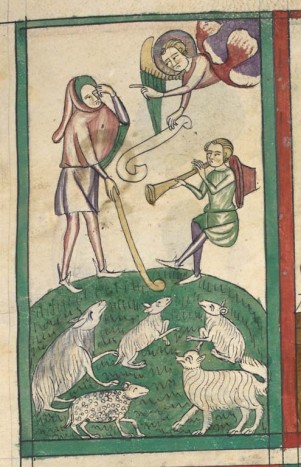 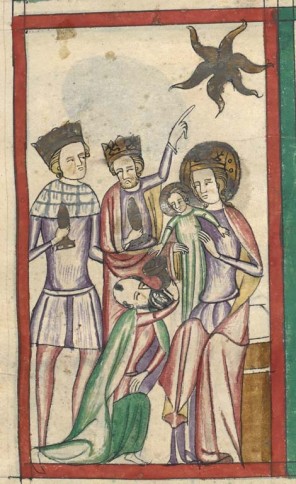 AWC presents to you a foundational prototype,
a trust for aesthetic, social and economic values,
an interventionist group for a joyful transformation of exploitative and precarious working conditions in the arts, a community-driven response to our shared vulnerability. (1)

The structure of L’Union des Refusés is based on the science fiction activism story written and lived by The Hologram, an empirical guide towards a Feminist, Peer-to-Peer Health for a Post-Pandemic Future launched in March, 2020. (2) Its initiator, Cassie Thornton, is a raging voice against the status quo of bureaucracy, lazy regulations and social skepticism. Its structure is based on Triangles, a form of mutual aid, taken from the methods of Greek Solidarity Clinics, where no one is a patient or a nurse, but an incomer, and the medicine is meant to bring together people to their environment, the body to the psyche, the body to its many parts, what is exactly the opposite to how current medicine is executed. Performing and non-performing members of society are invited to join L’Union des Refusés in an empowering way, as in The Hologram: For Free (as in Freedom) Care (as in interdependence).

Example 1: Join the Reception Team, or “Is there a doctor in the room?”

We call for diletants and experts and lovers of the arts to create together with AWC monthly joint virtual sessions, a regular meet up for art workers and incomers to proactively discern their own needs and interests, and also to shape together with us the values of the Union des Refusés: Solidarity and its power.

At reception, you can inform yourself about the dynamics and define which role you would like to take in the triangles: the structure in which members build the network of art labor for L’Union des Refusés.

In every joint session, during the lapse of 12 months, starting January 21, 2021, 3 practitioners will at the same time receive the new incomers, building different groups of people in break-out-rooms or by taking strolls in the park.

Just like in Solidarity Clinic a general physician, a psychotherapist and a friend might do, the triangular initiation within the Union des Refusés can be with one member of Arts of the Working Class, a curator, an artist, an author, an observer, a phd-candidate, a friend.

The integrative model we present on this first stage is to propose a different idea of art worker commons, authority, care and expertise. If you want to be part of this team, please write to us: hey@artsoftheworkingclass.org, RE: RECEPTION TEAM. 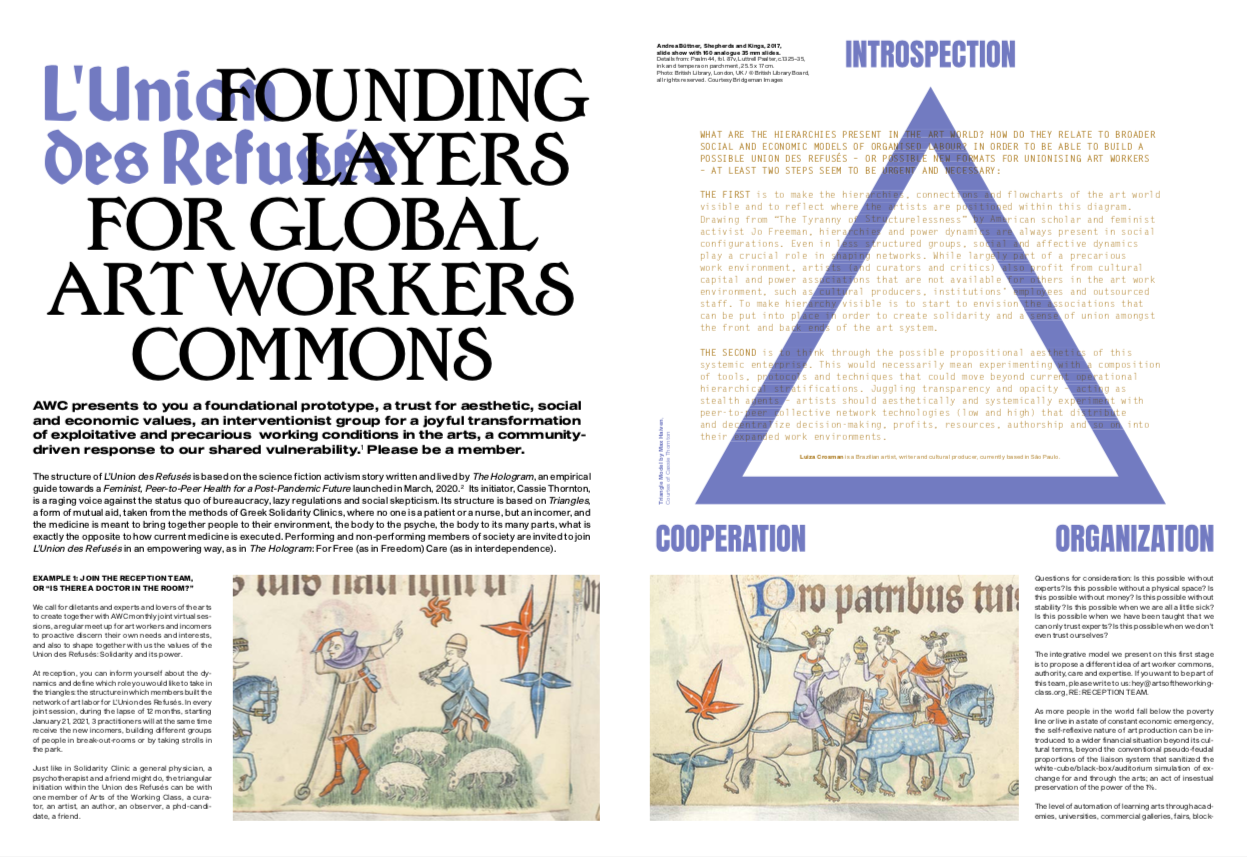 As more people in the world fall below the poverty line or live in a state of constant economic emergency, the self-reflexive nature of art production can be introduced to a wider financial situation beyond its cultural terms, beyond the conventional pseudo-feudal proportions of the liaison system that sanitized the white-cube/black-box/auditorium simulation of exchange for and through the arts; an act of insestual preservation of the power of the 1%.

The level of automation of learning arts through academies, universities, commercial galleries, fairs, blockbuster exhibitions in museums, generic residencies and discourses may have alleviated a feeling of shame for needing financial, intellectual, legal or emotional help, but it also has eliminated the potential for experiencing or practicing care and negotiation of the 99%. There are a million ways to get help without feeling like a burden to anyone. And that is the only exit to the ‘Precariat’.

L’Union des Refusés recruits people who want to build an association of art workers in which everyone has a voice. A Union that governs itself indeterminately (see Loren Britton & Helen Pritchard’s contribution in the next page on collective interactions). Its commons are there to protect and nurture resources, yet, as political educator Martin Neise (DIE LINKE) puts it, what unites the workers of the arts fields is unrecognizable, intangible. In order to organize an accessible Union for those who want to perform a transplant of the exploitation of intellectual values for universal basic income, a commonwealth school for art workers, we need to consider a certain openness to its durability. L’Union des Refusés has to shape itself according to local needs, giving the fragmentation of the so-called art world between commercial, institutional, self-organized and activist groups a unified voice, where collective power is necessary to resist oppression.

AWC’s motivation is always formulated in questions, as we want to have different, contradictory, ambivalent and righteous answers to them, in order to develop tactics that are not based on an idea of leadership, but of interdependence. Thus social disobedience, petitions, demonstrations or voting are certainly the references to behave towards change and collective action, yet, we want to react with new forms to the acceleration and mediatization of our lives. The real challenge is to instigate a post-capitalist environment for art labor and discourse.

Example 2: To get to know you(rself)

Art labor is embedded in a dysfunctional social-economical environment, and we are all part of the problem. Write/Record/Draw this down and focus on the bureaucratic procedures and economic alternatives you know or aspire to for a social and just working environment for art.

Questions for consideration: Where am I coming from? Where am I heading to? Where am I stuck? What is my contribution? What do I need?  When do I need help? How can I help others?

With L’Union des Refusés, AWC is not coming up with a new political concept, but a new systemic solution. It is linked to many other initiatives fostering equality and justice for all. We take as an example Ingo Niermann’s solutions 275-294, Communists Anonymous (2017), edited together with Joshua Simon, revisiting the failed and utopian ways of unionizing and gathering in the territories of the revolutionary. Niermann, laconically accurate, proposed a Trade Union of the Un- and Underemployed as a critical revision to the marxist separation from the proletariat from the lumpen-proletariat, the ideological traps of the classic template of the trade union and the roaring need of an universal basic income for all:

Unless they don’t want to end up stuck in windowless boxes eating soylent, the net beneficiaries of a decent basic income have to unite and fight for themselves: formally unemployed housewives and househusbands, retired and disabled people with little or no support, people on welfare, the homeless, refu- gees, most students, most artists, freelancers, jobbers, peasants. Different from factory workers at the peak of industrialization or unemployed workers at the peak of an economic crisis, a Trade Union of the Un- and Underemployed (TRUU) could represent an actual majority of people and threaten to take down any gov- ernment that doesn’t follow its agenda. (...) Those who still work could organize strikes in their respective fields. Precarious freelance workers could insist on guaranteed base fees for their services. (...) TRUU sees no competition between these different claims. Just the opposite. (3)

Niermann’s text predicted in 2016 the current condition, not only for all members of society mentioned above, but for every person whose precarious labor conditions are now intensified through the pandemic. TRUU exists as a proposal, and we take Niermann’s text and extend the observations of the communist anonymous into actions. Long enough have artists, curators, academics of the arts fields assumed a special moral authority, legitimized by their relative independence from concrete economic, political, and religious constraints. That independence reveals itself as an illusion today.  All museums are closed and all museum workers on furlough the moment the institution can’t sell tickets. Art critics lose their positions in national newspapers, the niche is celebrated as the last bastion of safety, and the only platform of aesthetic and discursive exchange. That’s a poverty trap right there. One that has brought many into the programmed obsolescence of capitalist trends making freelance work even considerable. So, we call you, dear reader, to consider this time to redistribute the wealth that has been deprived from art workers for too long.

There are, of course, organizations that advocate for the interests of art workers; states that fund (partially) the organizations, and federal governments that manage rescue programs to fill the temporary gaps made visible by the Pandemic. But what is behind the bureaucratic hurdles that make all this possible, are people that are not perceived as part of the art world, but from whom many decisions are dependent on.

Art workers are not just artists, curators, authors, or theorists. They are also officials sitting in front of application folders, deciding on foundation budget distribution, stand builders, waiters, caterers, interns, programmers, or people who sell this newspaper on the streets and in the subway. AWC wants to bring them together.

Exercise 3: How do you choose your triangle?

This is a totally unsolved mystery, writes Cassie Thornton. You can start by asking yourself these further questions:

Who do you feel the most comfortable with? Who have you seen work well with others? Who will you be tickled and excited to see? What three people will create a chemistry between them that you would enjoy being in? Who is wise and fun? Who do you like receiving care from? Who makes you feel the best about yourself? Who asks really good questions? Imagine the three people together in a room and then you enter. How does that feel?

Invite people to your triangle, and to create triangles of their own. The Hologram, as a structure, can be hard to describe, and thus, it can be hard to invite people into L’Union des Refusés. It seems complicated because it doesn't quite fit into any of the relational categories that we've set up so far in our society. It's like asking a friend, family member or acquaintance to play a slightly different role sometimes.

In an era where asking for help is degraded, it can be really hard to reach out and invite people in. Despite that, and because of that, we think it might be useful, powerful and important to call the people you would most like to invite to be in your hologram. It might be less intimidating (for them!) to have you walk them through what it is and why you want to do it. In the end it is actually quite a simple ritual, but it does take a little bit of time to describe it.

Knock Knock
Landlord is coming
You turn around
And smile without noticing That the land is vast
And your shoelace is untied.