MAY THE COMMONS GROW AND BE EDIBLE

A mapping of community projects in Berlin.

“Commons are defined by the existence of a shared property, in the form of a shared natural or social wealth—lands, waters, forests, systems of knowledge, capacities for care—to be used by all commoners, without any distinction.”

- Silvia Federici, Re-enchanting the world. Feminism and the Politics of the Commons, 2018

Unsurprisingly, if you ask someone who has recently been uprooted what they miss the most, they might say: their garden. Historically land has been a place of social nutrition, represented on a smaller scale by gardens, and have served to sustain the meaning of labour and culture making. In the same way that primitive accumulation, or the first phase of capitalism, had enclosed land and dispossessed practitioners from their own soil, the urban landscape has eliminated any place for diversity, commonality or alternative value production. Whilst contemporary consumerism replaced the nourishment given by communitarian endeavours and turned solidarity in a personal mission, few–so to say–courageous citizens (David Harvey, for one), in coalization, started to question what kind of population is produced by metropolitan architecture and which practices can be restored in order to foster a lost sense of community. In their becoming-world, they have opened the static notion of resistance to the vivid urgency and currency of organizing alternatives, by conjoining people and creating spaces where subjectivity can be collectively made..

We have listed a few of the many examples in Berlin that share this lively inclination, which through the connection between the very first human bond, the soil and its product:food, move toward the horizon of the commons. 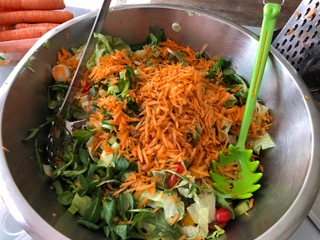 Netzwerk Urbane Gärten Berlin is a grassroot network founded in summer 2017, after the community garden Prachttomate in Neukölln–among the many threatened by similar reasons–lost part of its space due to a building project.

Since then, the network has organized and amplified the voices of the numerous community  gardens in Berlin which resist waves of gentrification, privatization and lack of social infrastructures. The network not only wants to enable communication, exchange and the sharing of garden-knowledge but aims to build a solidaric connection between the very different community gardens in Berlin. Those that understand themselves as part of the green and social infrastructure of the city, indeed, are not recreational green oases to escape to, but fragments of an alternative way of living, growing from collective making.They are based in willingness to spend time in the work of cooperation, discussing, negotiating, and learning to deal with conflicts and disagreement. Contrary to the rigorous regulative plans imposed on the urban texture, community gardens in Berlin don’t have any formal status, but through the collaborative work facilitated by Netzwerk Urbane Gärten, in this legislative gap, they negotiate their own politics and rules in self-organizing. As much as this informal status is a precious characteristic of the community gardens and the network that keeps them independent and strong through their diversity, it also makes them vulnerable within the harsh competition and discourse concerning land use and property policy, especially in the inner city of Berlin. That’s why the Netzwerk Urbane Gärten is most concerned about protecting existing green spaces and fighting for future perspectives for them and new gardens to come. As such the network sees itself as part of the movements to “reclaim the commons”. All gardens in the network commit to the code of conduct of the network in relation to space and people. In addition, most of them signed the URBAN GARDENING MANIFEST which was created by urban gardening activists from all over Germany in 2014.  No fee is required in order to take part in the many endeavours organized by the community and for the community. Among the many activities dedicated to the empowerment of people, nature and food sovereignty, and rootedness in a slower pace of value production urban gardeners transform fallow land into places of encounter, grow and exchange seeds, keep bees between and on top of buildings, experiment with different forms of composting, and practice preserving harvested vegetables. Often community gardens are places where a variety of relationships breaks class and cultural barriers, subverts structure of knowledge, and proclaims horizontality as the parameter for a future-oriented urbanity, freed from competitions and the compulsion to consume. Urban gardens furthermore offer an unnoticed service to the public and common good, branching  where social and educational programming fails to reach the many, but also in realizing ecological objectives such as: implementing organic gardening/farming, environmental protection measures, promotion of biodiversity, and measures for climate adaptation.

Many others, such as Prinzessinnen garden exist, and like moss, grow between the cracks of the sidewalks, nurturing people and the possibility of new societies to be. 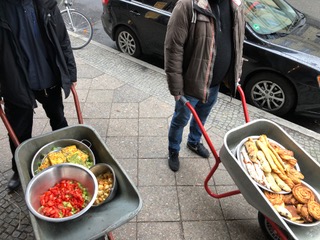 We, as Bilgisaray, has been operating for about 3 years, since 2019, as a neighborhood kitchen at Oranienstraße 45.

The initiators of the projects is a group which keeps Bilgisaray independently managed and financed. Due to the great need for a freely shareable environment, the interest in the Bilgisaray continues to increase in the city centre. After moving to Oranienstraße 45 at the beginning of 2019, the number of people and groups participating in the community kitchen has increased. With the expansion of the Bilgisaray’s environment, about fifty people are currently contributing organizationally. In this process, we realized that cooking and eating together is a connecting and accessible element. When it comes to taste, there is no language barrier and social hierarchies can thus be overcome.

We have proven that.

There is: a solid society. Our space is open to anyone who supports this idea.

Our participants consist of many different people and groups of the Kiez.Different communities, people from the field of art and culture, political and civil society, organizations, independent disability groups, especially anti-racist political groups can meet and continue their negotiations. Our field is different social, public or

open to political activities. Once a week we organize an all-inclusive meeting under the name of Inklusions-café and our space welcomes twice a week Prinzessinnengärten’s activities. We are hosting book presentations, movie screenings, exhibitions, action plans, lectures, home to events such as small concerts and above all the meals we ate together.

Each practitioner has their own key and is free to open and close the shop whenever he wants.

Some of the participants have regular appointments and use the Bilgisaray weekly, monthly, or quarterly – or as needed, regardless of a specific interval.

We also have a one-time meeting option. We are also welcoming spontaneous  appointments to keep Bilgisaray open to everyone.

Kiezkantine is one of the biggest weekly events in Bilgisaray. Every Tuesday our meals are prepared alternately by chefs and food teams. Everybody together is invited to cook, or optionally to come just as dinner participants. Evening meals are open to everyone. Dine on any of these evenings. If you want to be part of the team, you can sign up for our food calendar. The evening expenditures are financed by donations.

Long absent from Berlin because one of our neighbors is KuB. Many people attend these events. Many of these people eventually became part of the team and have become an integral part of it. Together, in solidarity like KiezKajute We created projects. KiezKajüte is home to those who need a place to stay.

Our priority is for those who have sought refuge in Oraninenstaße 45 to provide long-term accommodation and to meet these acute needs together trying to find solutions. Together with the dormitory institutions and other participants, we created a 5 bedroom apartment for people with difficult access to the regular housing market. 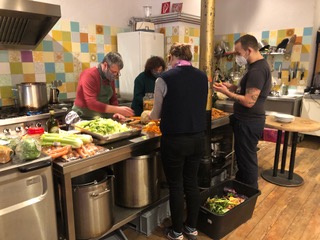 Sari-sari is a Tagalog word that literally means 'many things', a form of store ubiquitous all over the Philippines and usually built from a leftover space of a family house (e.g. garage, or a small hut). The concept is a multi-functioning place bringing extra livelihood for the owners as a social meeting point for the village, a versatile space for cultural expressions of being: karaoke, gaming, haircuts, naps, lottery tickets, drinking and folk songs. Similar to the 'warung' in Indonesia, and the 'späti or stübe' in Germany, it is an organic embassy or breathing space for the transient feeling of home and coming together. Planted by Pepe Dayaw in 2017, Sari-Sari has grown and become a part of village life, making friends with families, residents, collectives and local businesses in the area. As a project space for migrant cultures, it supports a cooperative of pop-up cooks / artists, neighbors, friends and performing collectives, where many artistic productions share a common place. Over the last year, the Sari-sari community in 2020 and 2021 has come to face a state of urgency within a stand-still, where the lack of usual distraction now makes inequities harder to ignore. The necessity for solidarity is felt locally and globally, and so we ask, What does solidarity look like? Feel like? Taste like? Where does it begin? Determined to see each other and the space through this pandemic, we invite you to come enjoy delicious food from our Sari Imbiss Window or donate to our GoFundMe page.

To a summer of collective cooking practices, migrant stories, and diverse artistic exchanges of commoning and storytelling in Sari-sari... Salud!