In late January, the IFFR transforms the Dutch harbour city into a haven for the auteurs from the fringes of cinema.

“All the rivers are connected,” claims filmmaker Oskar Alegria, speaking of the passage of his film Zumiriki, “like a message in a bottle” from the Venice Biennale to the International Film Festival Rotterdam, where I caught the first screening late one Friday night. The film, for which Alegria played the meta-role of writer-director-editor-producer-cinematographer-sound designer-star, saw the Basque artist relocating to a self-built cabin high in the Pyrenees to read Hugo, recapture his youth, and search for the traces of an errant cow rumoured to have run for the hills when a local farmer sold his flock for slaughter.

“There are many animals in this film,” he says. We catch furtive glimpses of martens, eagles, snuffling wild boar, and twitching deer, each shy beast a testament to the director’s abiding perseverance. At the pre-screening Q&A, Alegria’s menagerie expands further when he is ceremonially presented with a chocolate cookie in the form of a tiger, symbol of the IFFR, by Edwin Carels, curator of the festival’s Wait and See programme (a strand dedicated to films which “cultivate [read: ‘test’] the viewer’s patience”). 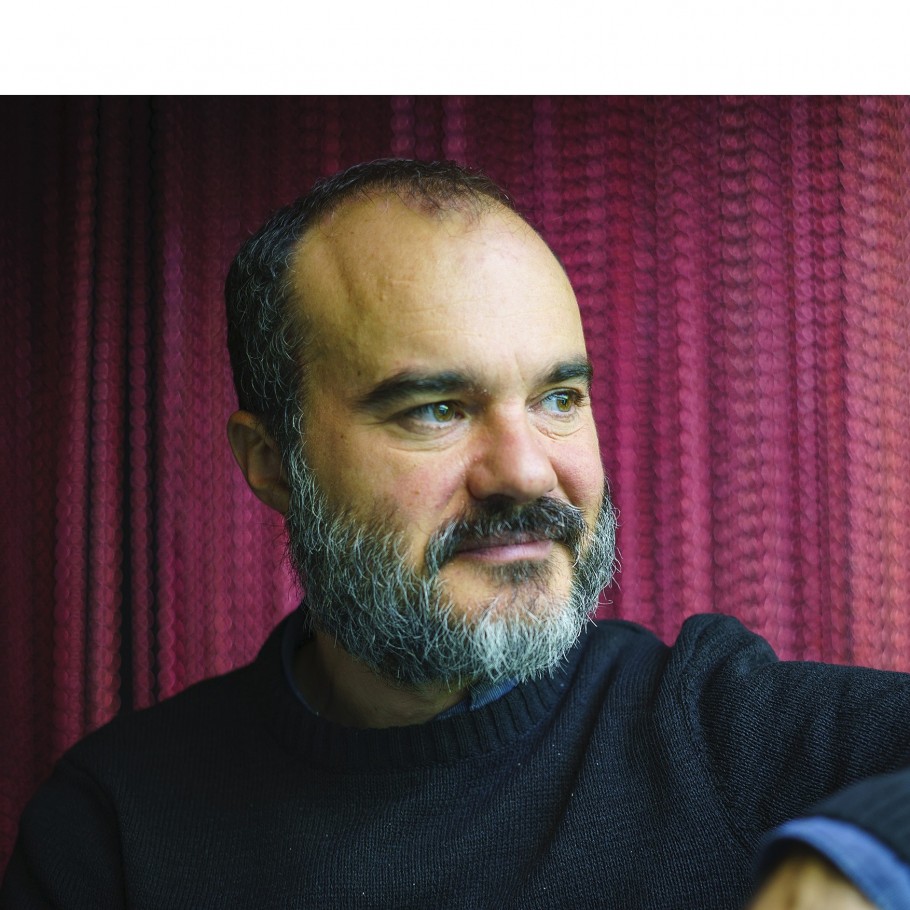 Alegria receives the gift with customary gusto, eagerly anticipating joining it to the lion he picked up at the Venice Biennale. But in truth the two big cats have little in common. The lion of the Biennale is quasi-heraldic, suggestive of ancient privilege and baroque grandeur. Imperiously, it casts its gaze up and to the side, as if recalling former glories. The Rotterdam tiger, by contrast, is resolutely modern, almost abstract in its stark agglomeration of thick curves and straight lines, like so many Euclidean planes rearranged by a peculiarly gifted child. Unlike its southern cousin, the IFFR’s tiger looks straight at the viewer, meeting the gaze with a steadfastness that is almost cute. It speaks of a more direct mode of communication, meeting its audience head on. I fear Alegria’s lion may look down its nose at its new neighbour. But the tiger will have the last laugh. Unless, of course, Alegria eats the cookie.

“We make those things that are beyond the obvious into our core business.” For IFFR’s artistic director Bero Beyer, cinema’s fringes are where the “more daring and more authentic” work is to be found. “That’s why we’re opening up to the visual arts on the one side,” he tells me at one of the festival’s numerous  receptions for press and industry guests, “opening up to technological innovations on another side, to different ways of contextualising the programme…” For Oskar Allegria, it was a journey to the fringes of civilization (the only other humans we see in Zumiriki are glimpsed as furtively as the scurrying pine martens) that allowed him to inhabit a particular vision of cinema – quite literally: the hut he builds on the riverbank, with its blackened interior and tiny opening, is a functioning camera obscura.

Elsewhere at the festival, images seem to keep spilling out of the screen and into the real world. A work-in-progress by the Quay Brothers becomes a multi-screen installation and veritable cabinet of curiosities in which antique objects resembling old fairground peepshows offer snatches of gothic dreamscapes. The American collective, The Umma Chroma (Terence Nance, Jenn Nkiru, Bradford Young, Marc Thomas and jazz composer-saxophonist Kamasi Washington) created a quasi-sacral atmosphere out of Kubrickian monoliths, brushed sand and flickering candles, fragments of some alien religion extending the Afrofuturist themes of their short film As Told to G/D Thyself into the gallery space at the Nieuwe Institute.

Still from the performance As Told to G/D Thyself, by The Umma Chroma at the Nieuwe Institute. Photo courtesy of IFFR

The IFFR has long been a kind of crossing point, a meeting place between two worlds: a home away from home for artists in the film world and experimental filmmakers perennially out-of-place in any world. It’s a position with certain advantages, as Edwin Carels explains to me. “You’re not in that art world circuit where everybody’s eyeing every move you do,” he says. “We don’t have to involve that art scene entourage, all the people surrounding the artist. We try to go straight to the artist. And we ask them to take the opportunity to go out of their comfort zone. We’re a bit more of a playground for them.” But it’s also a precarious position. “We have a very high adrenaline rush,” Carels says, “but very late in the process – and way too late for most.” The film world moves fast. A planned project with Italian-born artist Rosa Barba, in which projected images are triggered by the voices of multiple live choirs, had to be scrapped at the last minute. “Asking people to come out of their comfort zone and do something they haven’t done before implies a risk,” Carels admits. “We’re not going to force people into a constellation like this when not everybody’s comfortable yet.”

I’ve always had a soft spot for film festivals and film people, generally. Filmmakers always seem to have something of an air of the hustle about them, scrabbling around for finance for one project or another, getting the shot in the can whatever it takes. They tend towards the larger than life. And film festivals have a habit of engulfing their host cities in a way that few other cultural events quite manage. I remember visiting the Sundance Festival in Utah as a teenager and being amazed at the way every lamppost had been plastered with stickers for different films, every street corner had someone handing out flyers for their screening, every public building turned into a cinema or after-party venue. Sundance seemed to be all about getting into the right after-party with the right guest list and longtime, ‘serious’ festival goers have long been wont to complain that the actual film-making there (or at Cannes, Venice, etc.) risks being swallowed up by celebrity-spotting and red carpet events.

The IFFR is different. The ‘stars’ here are auteurs like Bong Joon-Ho, who came with a special black and white print of his award-winning Parasite, and cinematographer Diego Garcia. Beyer boasts to me that “half of the programme is shorts. And the bulk of the shorts is not the typical I-want-to-make-a-feature-film short little narrative film, but it’s something outrageous, something that you could play in a gallery.” This reference to I-want-to-make-a-feature-film shorts is pointed. There is definitely such a thing as the festival film. The kind of film that is made solely for its own reproduction. It is designed to play at a few festivals, not for an audience but to operate as a kind of business card, an entree to certain spaces where one can meet the right people to attract funding for future projects.

I saw a few of these at IFFR, but too few to mention. They don’t dominate the programme in the way they do at some other festivals. More notable were precisely those weird little shorts that Beyer spoke of. Like American artist Andrew Norman Wilson’s Z=IZ•z-1 mod 2|-1: Lavender Town Syndrome, a repetitive sequence of zooms into a single balcony on one of Chicago’s Marina City ‘corn cob’ buildings overlaid with a rambling monologue that starts off art school reminiscence and ends up speculating about where Pokémon go when they die. Like a queered Michael Snow, it somehow manages to be both hyper-formalist and viciously funny. Or Cyprien Gaillard’s brief Ocean II Ocean, a film which oneirically draws together a journey through sunken subway carriages off the coast of New York and fossilised sea creatures embedded in the marble walls of the Moscow Metro in a surreal meditation on the passing of time and the mutual entanglement of international waters. 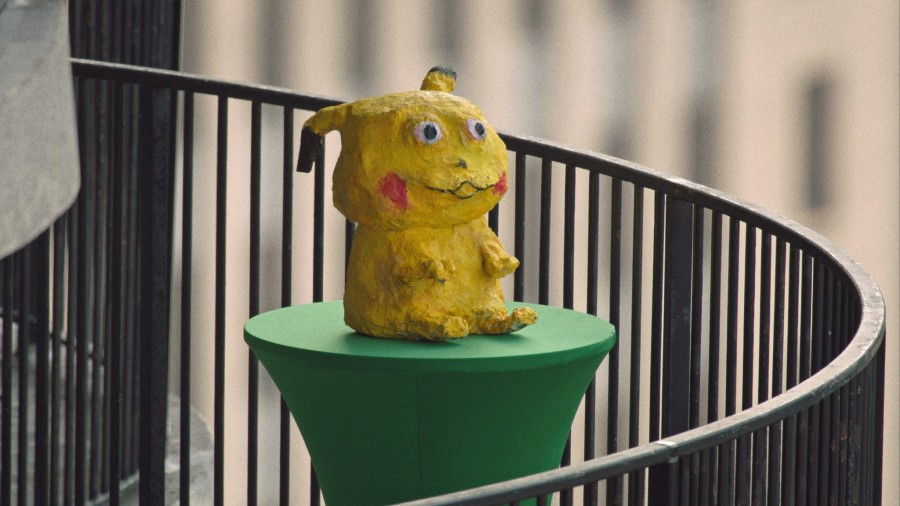 After a few days in Rotterdam, I find myself drifting semi-lucidly through the city, carried by the currents of the densely packed programme from one cinema to the next. An enchanting documentary about video art pioneers Steina and Woody Vasulka (The Vasulka Effect) flows into a moody neorealist feature set in the twilit world of smooth-voiced hustlers and masked luchadores in urban Guatemala (Los Fantasmas). “Rivers and seas connect us – positively and negatively,” goes the voiceover in Gyz La Rivière’s New Neapolis, a project mapping a byzantine series of connections between the old European port towns of Naples, Marseille, Liverpool and Rotterdam, from football chants to industrial waterways. My hotel looks over what was once Rotterdam’s  dockyards, and I can see a harbour now transformed into its own museum (the working port having shifted to the city’s western edgelands). Drawing together municipal funds and private sponsorship, events like the IFFR are posited as a key flank in the transformation of former industrial towns into modern cultural centres. It’s a process multiply embedded in systems of gentrification and cultural capital. “We don’t sell the art,” Carels exulted. But to some degree, the art is tasked with selling the city itself.

Though the IFFR occurred January 22 through Feb 2, 2020, you can follow their Calendar for special film screenings and events that continue throughout the year.