How an anti-gentrification model in the center of the city is opening up forms of mutual aid, global connection and self-revolutionary consciousness.

There is a lot of work to be done against gentrification and crowding-out processes in Frankfurt am Main’s central station district. The city's young project space Synnika invites artists, activists and scientists to initiate collaborative contributions and engage in the building of relationships and critical thought that has been overshadowed by the accelerating crises of the present. One thing is certain: art and urbanism are inextricably linked and that collective action is the only way to tackle such issues.

In urban planning conversion means the transformation of buildings and areas, in IT: the change of a data format, in the armaments industry: the shift towards civilian production. In March 2020, employees of General Electric walked out against their company, demanding to switch its aircraft engine facilities to the production of medical fans, instead of firing the employees as planned. Similar developments were visible around the globe in the following weeks and months. Demands for conversion are increasing in all areas of life. The future of »Remote Working«, beyond the current pandemic crisis, renders significant amounts of work and office space superfluous. Companies plan to balance stagnating and shrinking margins of profit by saving costs for wages and work space. At the same time, residential rents continue to rise. In this context the conversion of office space beyond the traditional housing typologies is a realist option for the creation of urgently needed living space in urban and peri-urban areas. Synnika has evolved from the direct engagement with the drastic urban developments of recent years. The space is located in the ground-floor of the NIKA.haus, a former office and store building at the intersection of Niddastrasse and Karlstraße in Frankfurt. Through the initiative of its residents the building was collectivized and integrated into the trans-regional Syndicate of Tenements. 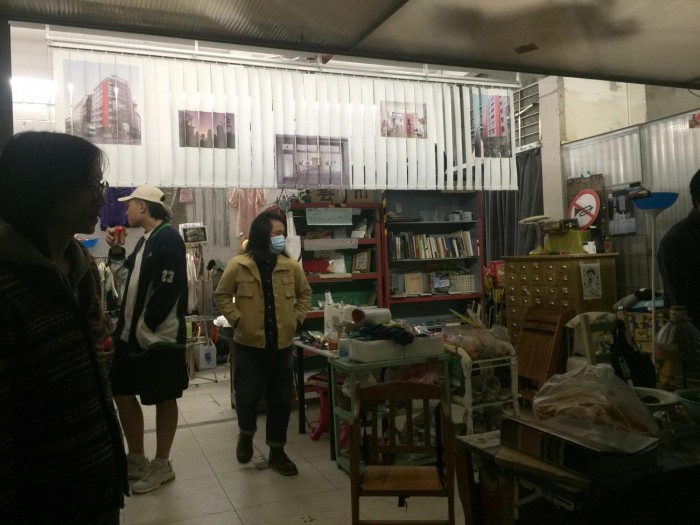 To Launch a Soeng Joeng Toi in Frankfurt

Synnika has recently become the host of the exchange project Soeng Joeng Toi (SJT) that was initiated in 2016 and officially launched in 2017 in a residential community in Guangzhou, China. Its initiators and participants are a group of people from different fields with different identities, such as artists, writers, curators, chefs, video makers and so on. They are neither willing to accept the constraints from the society and state institutions, nor to live like an isolated atom. In SJT, these atoms are freely organizing into different forms of molecules (practice projects). Through participatory democracy with equal consultation between molecules, the group is maintaining and expending this collaboration and connection, co-organizing and developing the possibility of SJT. There are already thirteen such projects in SJT. Therefore, in the first place, SJT is based on a practical and ethical approach. Its consciousness can be described as merely trying to continually resist and question the occurrence and intrusion of any power relationship in different areas, or at least trying to maintain the consistency between means and purpose. For example, SJT emphasizes the everyday life of individuals／collectives and the construction of a (non-capitalist) economic life and the imagination of the future culture and society, which may not be elucidated intentionally but is not difficult to be perceived, or the attempt to restore the socially engaged function of art in the Chinese context.

In terms of its production and creation mode it is a decentralized space and collaborative network that make mutual perception, provocation and collaboration part of everyday life. At the same time, the network is also providing space and media for the discussion and realization of various exploratory and critical ideas. In this way, talents from different backgrounds can resonate together and bring self-educational and self-revolutionary consciousness to the practical here and now. Collaboration and connection make SJT an organism that creates and releases energy continually. This energy is not only face toward the local region. The production mold of SJT is a combination of cross-language, cross-regional exchanges and collectives in multiple contexts. The urgency of promoting it is emerging everywhere today. This mold differentiates and responds to everyday life and political experience based on local regions, but it cannot be achieved within a region, a country or a nation. Moreover, this does not mean that responses (projects) from different areas can be linked naturally to each other without being cut off. 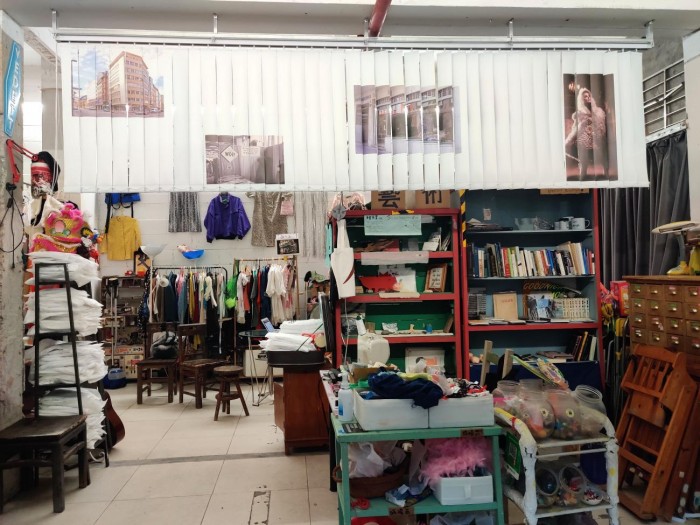 The motivation of meeting directly brings us to Frankfurt. At the same time, we believe this meeting can help us to discern the particularity and universality of our experience and find our references and comparisons. Only living, chatting, touching and reflecting together face to face can establish a broader collaboration and connection. We folded the time of SJT and opened it into this ‘small area.’ We invited current and former practice projects to present what they have done in SJT, including not only connections of individuals and groups but also a series of texts, meeting records and discussions that form the minimum consensus of SJT. More than 1,200 years ago, the poet Li Bai and his friend visited the Joeng Toi Temple in the mountain to learn the Taoist method of self-liberation. The poem he wrote for this experience became the inspiration of the name of SJT. At this SJT in Frankfurt, we are not aiming or motivated by the transcendent approach to the world or life, but we still look forward to something mysterious and happy that you will bring here. 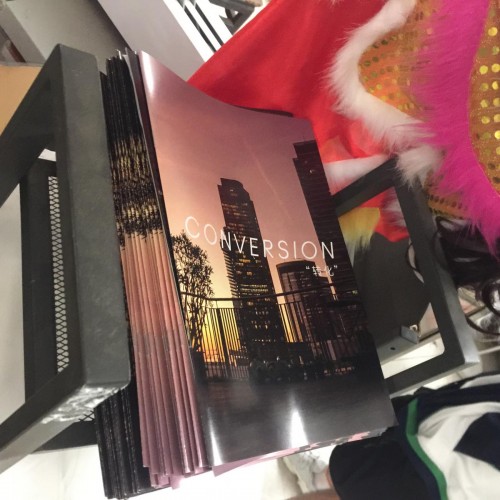 The Conversion installation at SJT in Guangzhou is the starting point of a one-year program with the same name, taking place at Synnika from December 07, 2020 to December 31, 2021. It comprises alternating contributions starting with artist and fashion designer Miao & ChaoCoop’s Mothers of Ultra, followed by artist collective Blockadia*Tiefsee, visual artists Zoë Claire Miller, Vanessa Opoku and Nicholas Warburg, as well as the electronica music label Mille Platteaux.

"As isolating as the current urban realities might appear to its inhabitants, they are at the same time increasingly comparable on a global level."

SELECTION OF OTHER ACTIVITIES AT SOENG JOENG TOI: 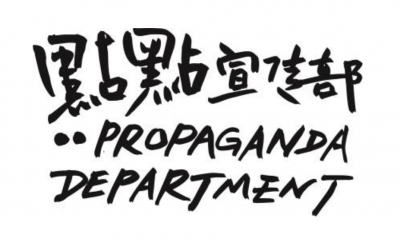 “点点宣传部”是对文字空间的探讨，是用出版显示一路 行进的“听－说”集合体。“點點”或“点点”在构字法 上：黑色是其意义指向；占则是其发音属性，又同时与其 他同样发音的字词组成一个意群代表充斥和占据。她的 出版项目则是一种慢节奏的身体延伸和产出。随着出版 的行进，散发出去激起点点涟漪，也就建立了这个集合体 和空间路径中其他身体的联系。•• PROPAGANDA DEPARTMENT is an inquiry into textual space, an ongoing assemblage of ‘hearsay’ manifest in print form. “••” may be pronounced diăn diăn, or dim2 dim2 , or dot dot, etc., etc., depending upon the common attribution for the symbol in your preferred language. Its publications are a corporeal extension following the slow rhythms of the haptic, 18 mechanically distributed text: partially anonymous, intended as a dispersion, free to peruse and opening a different set of possible actions. 这个匿名集合体开始于 2017 年，并承接了一系列刊物的 公开印刷出版和发行，其中叫得上名的如《等等目录》。 The anonymous collective was established in 2017 and has undertaken a series of publicly distributed broadsheets known as the Etc., Etc., catalogue. 《等等目录》的第二期做成了番薯的包装纸进行传播，是 子杰 2017 年初在广州的公共绿地间进行的番薯种植计划 的一部分，该期包括了游击种植的指导、一篇点点宣传部 的社论，也记录了当时全球财富论坛在穗召开期间的一 次漂移野餐，以及番薯食谱和关于阶级差别在食物文化 上的体现的对谈。 The second issue of Etc., Etc., catalogue was disseminated as packaging paper for yams given away as part of the Urban Sweet Potato Gardening Project initiated by artist June LEE. Contents include a guerrilla planting guide, op-ed society piece from the •• Propaganda Department editorial bureau, records from a Global Economic Forum dérive in Guangzhou as well as recipes and a conversation on class distinctions in food culture. 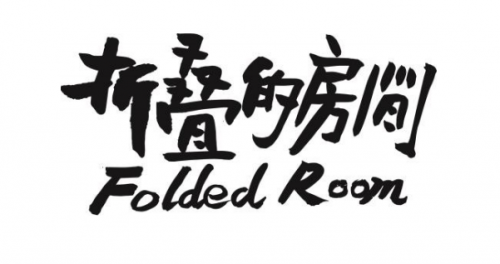 折叠的房间来自“实践论”，通过游牧于不同城市并进入 出人意表的场所，它试图促成一种关乎行动经验和路径 的空间互助网络。其中节点是闪烁不定的：目前，在广 州、沈阳、贵阳、武汉、汕头、北京、上海、深圳、长沙 存在着／过常设或临时的房间。折叠的房间基于以下预 设：即使在不同语境下（城市、街区或社区，政治环境或 资本条件），也有存在两个相同房间的可能。我们觉得这 意味着比主流的“本真性”预设更好的一种可能——一张 纸上的多个点如何以最轻快的方式贯通？ Folded Room, having evolved from a previous project OnPractice, is a nomadic enterprise roaming through different cities, and though entering some surprising spaces, it tries to promote a mobile network of action experiences 27 and methods; some nodes in this network are flickering, but currently there exist both permanent and temporary “rooms” in Guanghzhou, Shenyang, Guiyang, Wuhan, Shantou, Beijing, Shanghai, Shenzhen and Changsha. Folded Room’s practice is based on certain presuppositions: even with different contexts (cities, communities, blocks, political environments or capital conditions), there still exists the possibility of two identical rooms. This presupposition acts as a better possibility than the mainstream presupposition of “authenticity”, which poses the question: “How can we link up all these points written on a piece of paper in the briskest and most lively way?” 在法兰克福，折叠的房间邀请了来自 5 个城市的 8 个空 间／项目／个人，其中定海桥互助社（上海）、复印 info （武汉）、目田（长沙）、仙境（沈阳）是不同形态的青年 空间／社群，副本制作、木刻波流是以广州为据点的创 作／出版计划，万青、吴海珠是生活于广州的导演／艺 术家。折叠的房间带来大家的创作、出版物和影像，有的 28 是文学写作和跨国族思想交流的成果，有的是社区艺术 工作坊的记录，有的是音乐、戏剧演出等各种集体性项目 的记录。 In Frankfurt, Folded Room invited eight spaces / projects / individuals from five cities. Dinghaiqiao Mutual-aid Society (Shanghai), Fuyin-info (Wuhan), MuTian (Changsha), and Wonderland (Shenyang) are different forms of youth space / communities; Instance and Woodcut Wavement are creation / publishing projects based in Guangzhou; Wan Qing and Wu Haizhu are director / artist and live in Guangzhou. Folded Room introduced their creation, publication, and film. Some are the result of literary writing and exchange of transnational ideas. Some are records of community art workshops, and some are records of various collective projects such as music and drama performances. 万青的《七上八下》是本次的特别放映，这部纪录片从作 者 2016 年参与的广州民间的女权主义行动现场和个人家 庭日常同时切入，并梳理了二十世纪中国的性别图像。它 29 的提问是：在资本“-分化区隔-制造焦虑-促生欲望-反 哺资本-”的这一似乎看不到尽头的循环链中，大众日常 如何被侵入和改写？行动者如何尝试介入和破局，他们面 临怎样的困境？身处复杂社会情状，“我”能做的选择及 姿态又是怎样？ In particular, we brought the “The Anxiety of Desire” directed by Wan Qing. This documentary showcases the live footage of the feminist action the author participated in Guangzhou, 2016 and the author's family scenes. It looks into the gender images of China in the 20th century. The questions it proposes are as follows: How can the public life be invaded and rewritten in the seemingly endless circular chain of capital “differentiation and segmentation – anxiety production– desire promotion – capital feedback”? How does one try to intervene and change the situation? What kind of predicament do they face? In a complex social situation, what are the choices and gestures that “I” can do?