During the last weekend of August (27. - 29.08.) at the Klosterruine Berlin, a conjunction of the two shows of Foreigners know and Vivero Enredado (Entangled Greenhouse’, on view until 19.09.21), with installations by Andrés Pereira Paz, David Reiber Otálora and José Montealegre, created an environment made from leftovers of European colonialism. I found myself in front of a landscape made of traces of what we consider to be the long gone past: the remnants of destroyed habitats, ancestral lands and uncountable lives, the strange entanglements of those who lived in and through those times. “Time”, as Harry Dodge writes, “doesn’t move in one direction but upon its surface: ‘’that is to say, on its protrusions, there are eddies too, things that reverse, or simply start again and again.’’ This show happened on the inside of those protrusions.

José Montealegre’s installation Vivero Enredado starts in 1570, when Francisco Hernández de Toledo, a naturalist and physician of the Court of King Philip II of Spain, was sent to what is known today as the first scientific and botanical expedition to the ‘’New World’’. Montealegre’s work consists of copper, bronze and tin sculptures made according to the drawings of plants in Nova Plantarum, animalum et mineralum Mexicanorum historia, the manuscript which was a result of Hernández de Toledo’s seven year-long research. The copper plants are placed inside of a greenhouse, surrounded by working tools, gardening gloves, traces of soil spilled around empty terracotta pots and by calendars, which function by stretching out the four weeks of the exhibition into a year; they seem to be suspended in time, petrified, scorched by sun and fire, forgotten, dried out, thriving and blossoming, all at the same time. Their temporality is of a different kind; they are materializations of a process that lasted centuries. Initially, drawings were made by three Náhua painters, known to us only under their Spanish names: Antón, Balthazar Elías and Pedro Vásquez. The introduction to the manuscript was published before Hernández de Toledo died, but a big part of the original work disappeared in a fire. Incomprehensible to Philipp II, the text was prepared for publication by another physician, who put the special emphasis on plants which he considered useful for treating syphilis — so it was thanks to syphilis that the first publication appeared as Quatro Libros de la Naturaleza in 1615, followed by two redacted Latin versions in Rome in 1628 and in 1648. Finally, a fourth compilation from 1790 was used to convince Charles III of Spain to authorize a second major botanical expedition to Santo Domingo, Cuba and Puerto Rico.

In Montealergre’s installation, the plants seem to be alive on their own terms — undead matter, copied, erased, reduced, scorched by fire, translated, misinterpreted, forgotten and ‘discovered’ again. Their leaves slowly change from rusty red to green, as copper oxidizes and mimics the process of photosynthesis. These plants don’t need any sunlight; their leaves turn green through time, as if they suck on it. 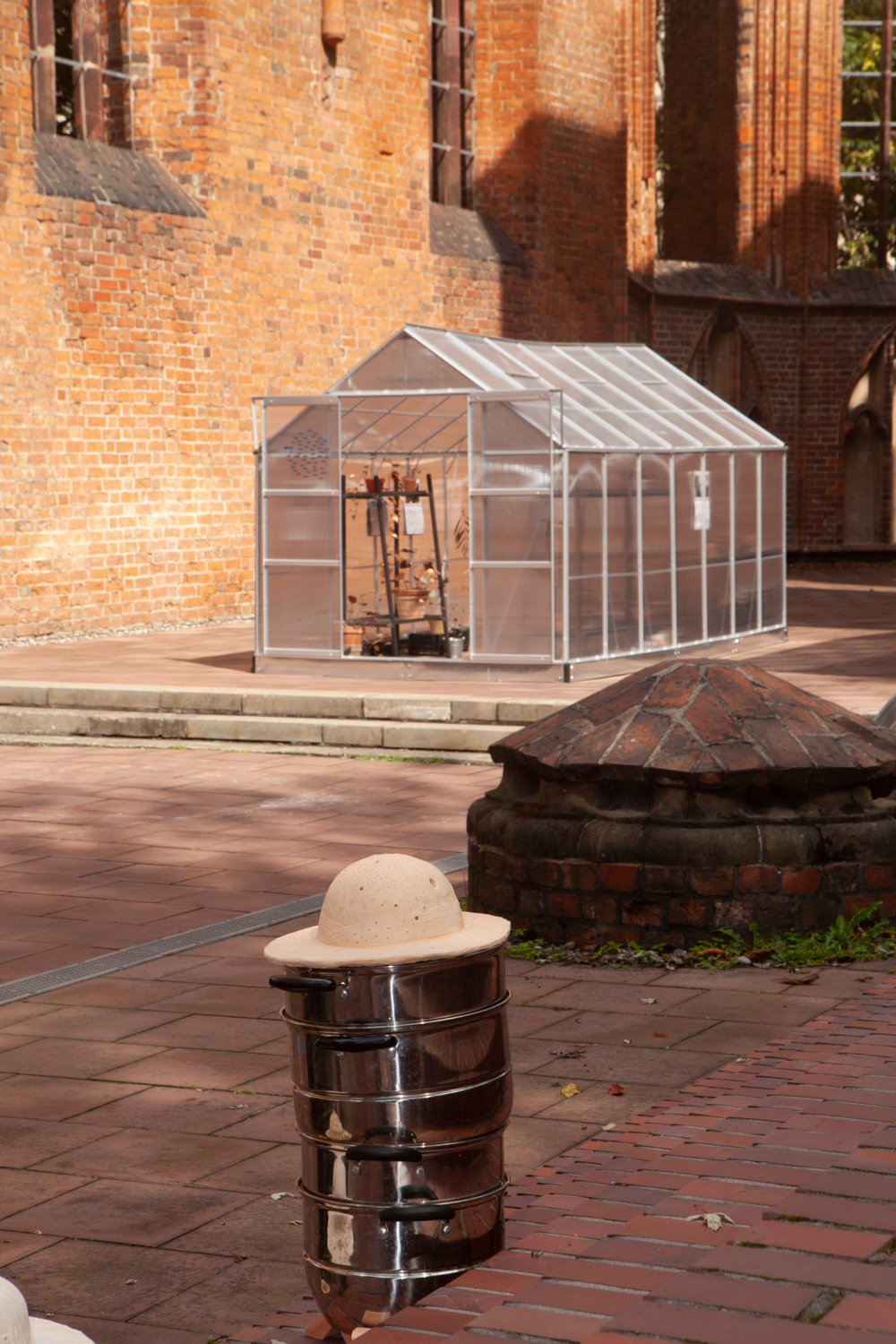 In 2019, when the Amazonian forest was burning, a bird of bad omen, the guajojó, appeared in La Paz as her habitat disappeared in flames — I can imagine the bewilderment of the people of La Paz when they spotted it at 3500 meters above sea level, knowing that it usually doesn’t come higher than 1900m. There’s something fitting in hearing this sad, low warning in the middle of the traffic sounds around Alexanderplatz; it’s as ‘foreign’ in Berlin as it is in La Paz, and the meaning of it can be easily missed if one doesn’t know how to interpret it. Accompanied by the song and heartbeat of guajojó, Andrés Pereira Paz’s metallic, celestial sculptures are illuminated as if they are burning in flames. The astral shapes are references to the drawings by Felipe Guaman Poma de Ayala (c. 1535 – c. 1615), a Quechua nobleman and a first Amerindian chronicler, the author of El primer nueva corónica y buen gobierno’ (The First New Chronicle and Good Government). In this text, he exposed the suffering of the indigenous people of the Andes under Spanish rule, and appealed to Philipp III — the son of the same king who sent Francisco Hernandez de Toledo to the expedition to Mexico. In one of the letters, Guaman Poma pleads with the king to allow the indigenous people of the land to assume positions of authority: “There will be no Indian in this kingdom by which your royal crown and the defense of our holy Catholic faith might be served. Because without the Indians, your Majesty is worth nothing. Because one must remember that Castile is Castile because of the Indians’’. Later on, he writes about the miners poisoned by mercury used in extracting gold; a technique which remains to this day as the main cause of mercury pollution and poisoning in artisanal and small-scale gold mining. After many years of serving “as a translator, conversing, asking questions to the Spanish poor, the Indian poor, and the black poor’’, in December 1600 Guaman Poma lost the control of the ancestral lands, and was forced to exile. His text was kept in the Danish Royal Library and appeared as a facsimile in Paris in 1936, accompanied by the critical transcription of the book in 1980. Although the original manuscript was dedicated to Philipp III, it’s very unlikely that the king ever received it, and least likely of all that he might have glanced at it. The sound of the guajojó bird creates a bridge to this time: just as much as it represents the unbearable present, it’s also the sound of the past. I’m reminded of the work of Steven Feld, who argued for sound as a capacity to know and as a habit of knowing. In Papua New Guinea, in the late 1970s, he recorded the funeral weeping of the Bosavi people, only to realize later on that they imitated the sounds of birds in their funeral rites. The Bosavi thought of birds as ‘’past reverberations’’, where their sounds were the only materialization in the world that reflected an absence. Similarly, the weeping of the guajojó makes the absence of its habitat and its people audible, and turns it into presence. 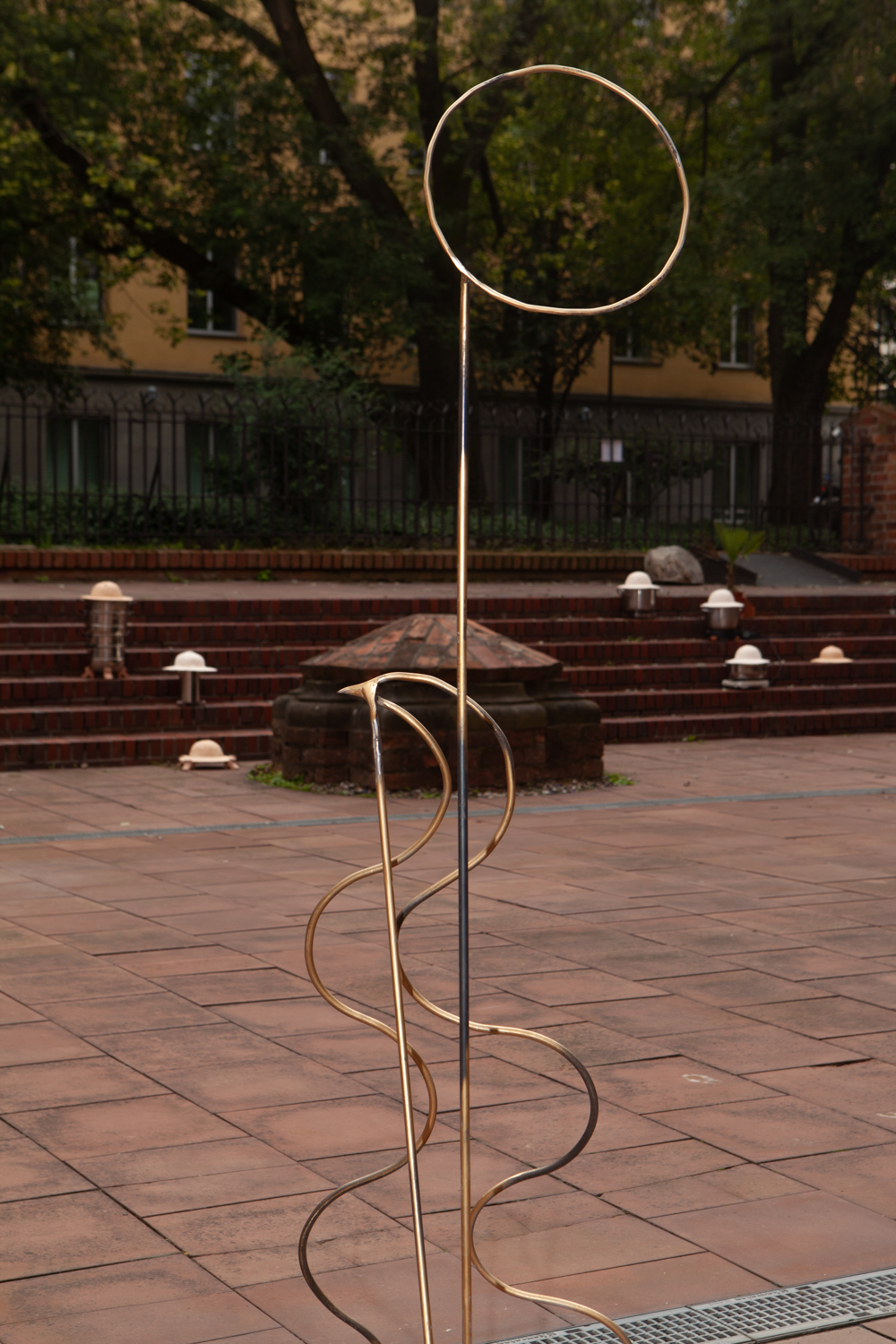 The way that all of the versions of Nova Plantarum, animalum et mineralum Mexicanorum historia and El primer nueva corónica y buen gobierno reach us through time is a story of error, echoing, transcribing, mimicking, reinterpreting, extracting, exploiting and destroying Amerindian knowledge, culture and lives. I imagine the original manuscripts crossing the water, the first accompanied by vanilla, cacao and corn seeds, bound in blue leather and ornamented with gold and silver, for one king, and then the latter, the text describing all the suffering and violence, for the king’s son.

The installation Hot, Heimat, Horizon by David Reiber Otálora draws our attention to the figure of ‘’the western explorer’’: pith helmets made of clay are placed on big, stainless steel pots on the electric hotplates, and the smoke coming out of them insinuates that the explorers are being cooked. It smells pleasant, like a forest. The work references the colon statues, wooden figurative sculptures which originated in West Africa during the colonial period. They depicted the colonizers, wearing pith helmets, suits, official uniforms or tobacco pipes, and became popular as souvenirs after World War II. In Embodying Colonial Memories: Spirit Possession, Power, and the Hauka in West Africa, Paul Stoller writes “Great masters of plastic arts, the Baule of West Africa began to carve the ‘’European’’ figures sometime after the collapse of the armed resistance in 1911. In Baule there are many “other-world’’ spirits which, if not attended to, can bring harm to people. Every Baule is linked to an other-world being of the opposite sex. Sometimes the divination can show that it’s necessary to represent this other-world person by statue carved in human form to which the offerings of food and money can be made on a regular basis.’’ The figures were often placed on the intersections of roads, next to the bridges and at the village entrances, in order to warn off people that Europeans were present in the area, and used as ‘fetishes’ to which the sacrifices were made in order to keep the Europeans away. The statues became mediators not of something out of this world, but of the enormous and incomprehensible power that colonizers had in the everyday lives of colonized people. The smoke coming out of the hats suggests that some kind of transformation is happening: the image is, in a strange way, very soothing. What if the hats would be the only leftovers of their owners’ deeds? 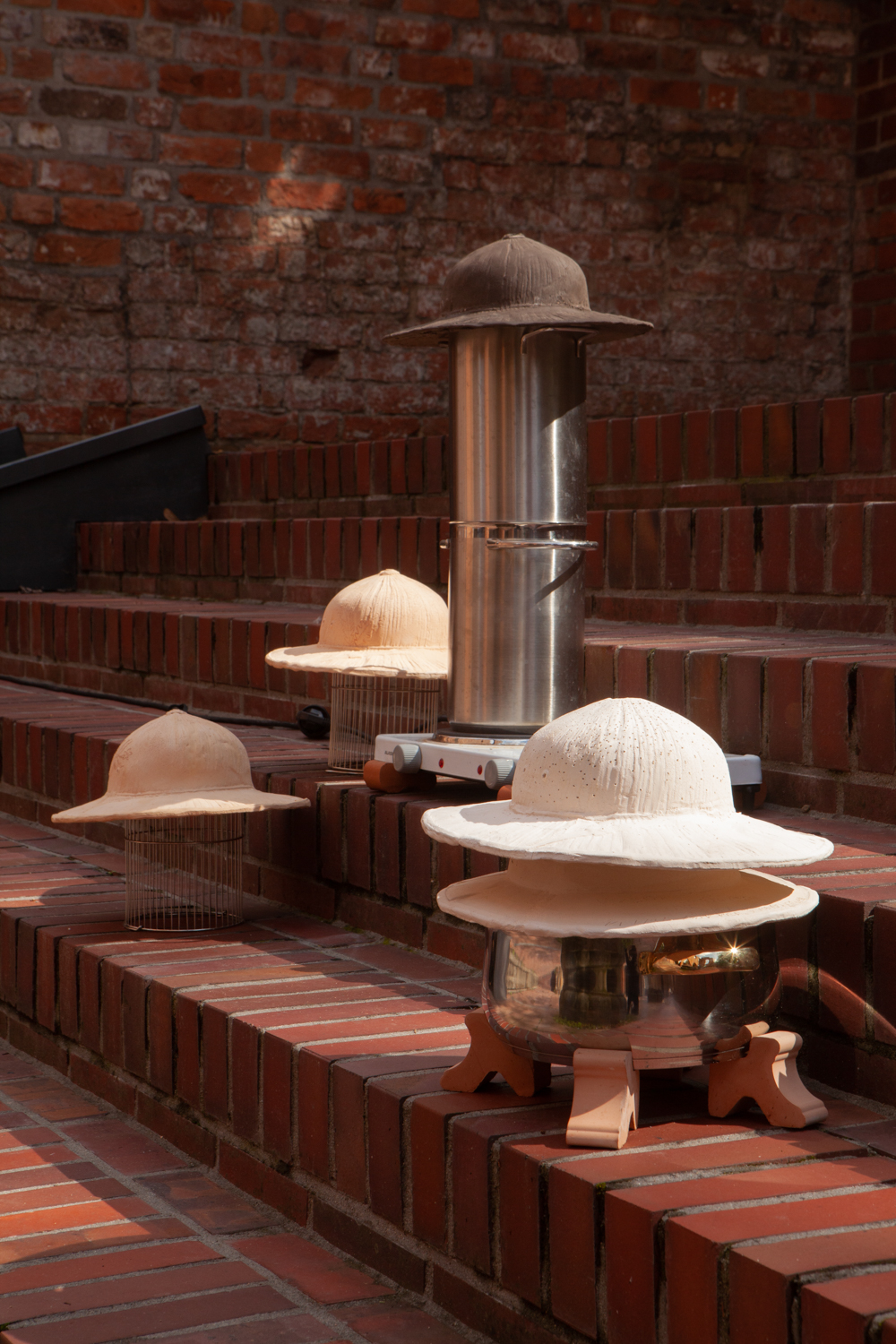 This habitat of echos suggests that in order to transmute, we cannot obliterate, because the matter doesn’t behave that way. Each element is already a spin off, a new route, another whirlpool on the fat, flat line of time; a habitat which doesn’t need the light of the sun, a horizon burned by a forest. The elements corrode, collapse and stretch time, and what emerges across five centuries is not a feeling of imminent doom, but of its delayed arrival, its permanent suspension and the lives and life-forms destroyed and created in the midst and in the face of it. It’s a landscape of a slow apocalypse, and it’s inviting us to look at it.