PORTRAIT OF THE ARTIST AS AN ENIGMA

It all starts with a personal story: it’s the 1970s and the fascist regime in the Philippines run by a kleptocrat, Ferdinand Marcos, has been reelected. Students start to radicalize against the anti-Marxist environment, a rising inequality within society which has arisen thanks to bribery schemes and an inflating payment crisis created by his government. Medalla kneels in front of the museum in which he is exhibiting, with protest signs reading:

“(...) You Marcos, – your wife Imelda, and your handful of fascist gangsters – will surely meet your doom, in the hands of the Filipino people. We proclaim solidarity with our Filipino brothers and sisters. Mabuhay and Masang Pilipino!”

The moment in which the police attempt to arrest him, Medalla replies by saying this is an artwork, and that he is an artist, part of the exhibition just about to open. The International Committee for Freedom in the Philippines can be seen as an exemplary way in which the participatory idea of the artwork comes to life. Within extreme political conditions, Medalla looks into the historical and ephemeral through one single lens, by questioning the existence of technologies, and focusing on the beauty of the hands of people as carriers of society, against the machines.

On the edge of the exhibition space and the streets, A Stitch in Time is hanging from the roof of the Bonner Kunstverein, like the unfolded carpet into the exquisite and humble lives of David Medalla, whose untimely passing came at the end of 2020 before the opening of a two-sided in-depth survey and exhibition, here in Bonn and in Bolzano. I write in plural, as the golden fabric allows one to think of David Medalla in unchronological, unconventional manners. In Plural. Like the things every visitor can stitch in here, as being part of the artwork, in a dialogue, with and without a common language for an artistic discourse. 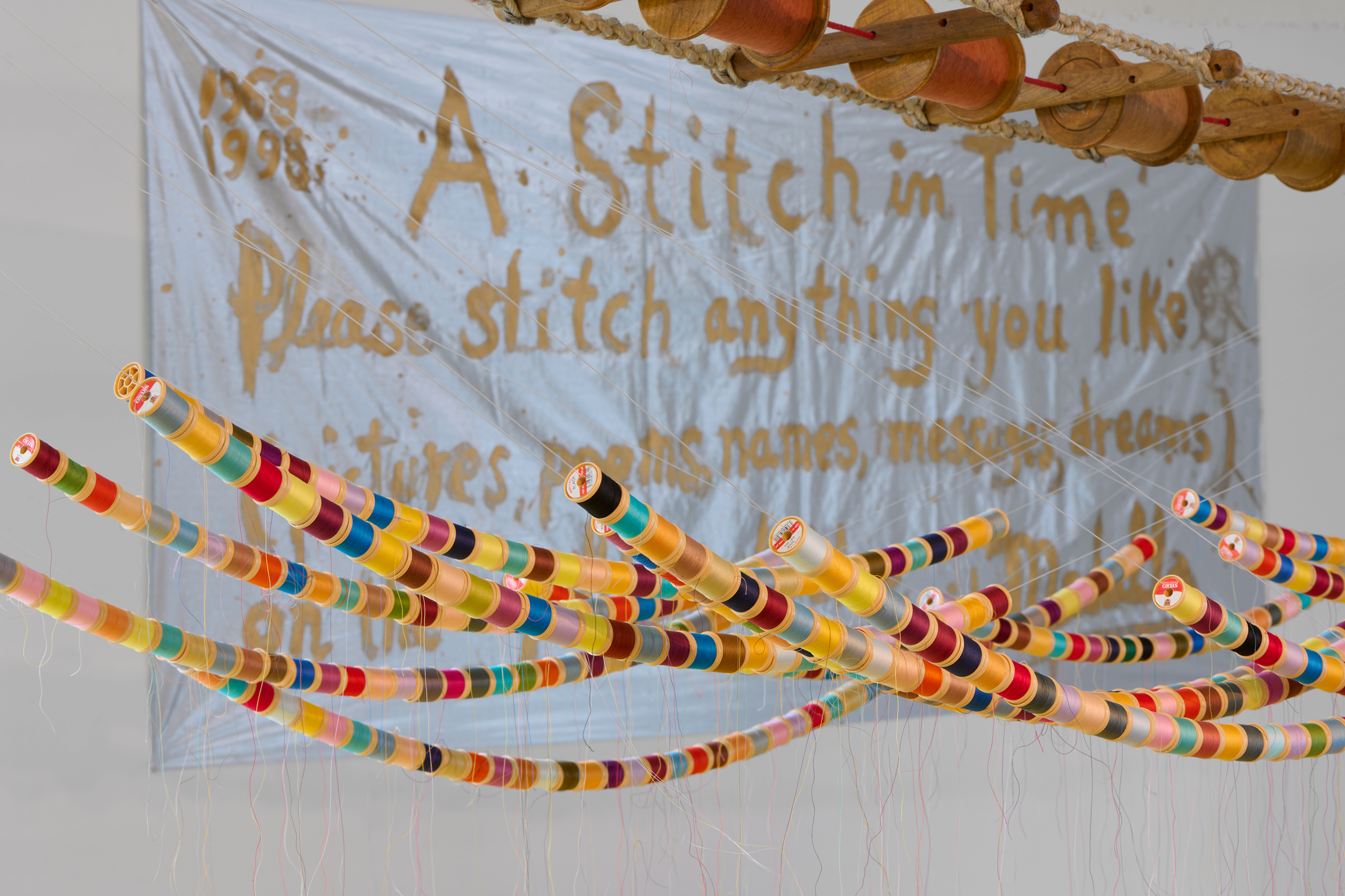 A little fish is recognisable on the side, and it is with this little image that I dive into the dreamscapes of culture, as vastly as Medalla understood it. A Stitch in Time exists in many different versions and in different places. In Paris, people would go to the toilet and take polaroids of themselves naked and stitch them on; in Texas, some would stitch an enormous marijuana joint; in St. Ives, others stitched prayers; in Venice, masses would horde around it and celebrate it as an act of togetherness. 50 years ago, in Kassel, as part of Harald Szeemanns’ legendary documenta 5, people would stitch railway and bus tickets. That documenta would mark a fundamental change in what Szeemann would call the reality of representation, the reality of the subject, and the identity or nonidentity of visual representation and subject.

Medalla’s work came to fit with this curatorial desire to let people decide for themselves on what is art and what is not. Between “high” and “low”. Between what is disposable and what is to be treasured. It is no surprise that the upcoming documenta fifteen is strongly connected to the antithetical attitude of 1972, when artists would give up abstraction for spiritual acts, political propaganda and personal obsessions. Ben Vautier hung “Kunst ist überflüssig” on the frieze of the Fridericianum, a fluxus gesture among many that would give art an equal role to everything else in society. Documenta’s current artistic directors, ruangrupa, subvert the notion of curatorial strategies, and, through a miasma of aesthetical, political and activist approaches, slowly establish an anti-hegemonic notion that is transforming European institutional structures. This is how it’s appearing months before the opening of edition fifteen, and hopefully it could change the art world for good. A desire for change is imminently in the air.

Desire: that is Medalla’s motor for exploring multiplicity in reality, in fiction, and beyond this binomial. His engagement with beauty, always disembodying into an enigma. That is, to remain in the unpronounceable formulation of truth, in the echoes of personal and collective memories of the Second World War (in the Philippines), in the practice of interrelating with others beyond good and evil. His works, occasions and impromptus are meant as the earnest act of dissolving into the other, humorously. His masks, made out of magazine pages or advertisement brochures, shift the semantic logic of the object as a veil to what’s behind it; or rather, a membrane to be crossed into the essence of the artist himself.

In Bonn, Fatima Hellberg, Steven Cairns and Michael Kleine crossed the interdisciplinary nature of Medalla’s work in relation to the body, performance, and participation. Parables of Friendship was taken literally, dedicating a massive architecture to his affinity with camp aesthetics, 19th-century European literature and mythological self-depictions. As its title suggests, the exhibition is a space for the notion of friendship as an informal exchange and as a potential narrative. This doubleness, they write, is at the heart of Medalla’s work. This doubleness, I felt, has also to do with a meta-frame for the curators and the architect of the exhibition to undress as humans, to absorb themselves in the absurdism, dandyism and humanism contained in the allegorical paintings, archives and works on paper displayed on soft and raw surfaces sculpted by the spatial structure that they gave to these formations.

This is how, for example, Michael Kleine conceived a soirée for all of the members and guests of the Bonner Kunstverein, in which Anna Fusek, Gianluca Geremia and Roman Lemberg played pastorals by Purcell, which Kleine sung delightfully with his baritone voice. Sitting in the darkness of the soirée at the end of a sinister year, I inevitably linked the scene with a fantasy: if this stage resembles a cave (it was rather a super-cool camping tent, but still), what are the luminaries that irradiate a connection to the angels from Medalla’s New Yorker years? Was “La Cave d’Angely” also full of transient relations between poets, artists, and visitors?

Just like with music, Medalla speaks of longing through painting. Depicting many individuals in pictorial isolation, he escapes Western iconography gracefully, exploring the abundance and self-reliance of scenes that reveal a nostalgic mode of representation. His paintings are surprising, sometimes. GastARBEITERS (1985), for example, connects with the reality of migrant workers in Germany with the sovereignty stolen from them, as the proportions of these categories of the ‘guest’ and ‘worker’ stripped humans from their entitlement to their full rights as citizens. Poetry sounds in the background, while seemingly-naively painted pairs of workers are figuratively commemorated and suspended in a moment of mutual recognition. 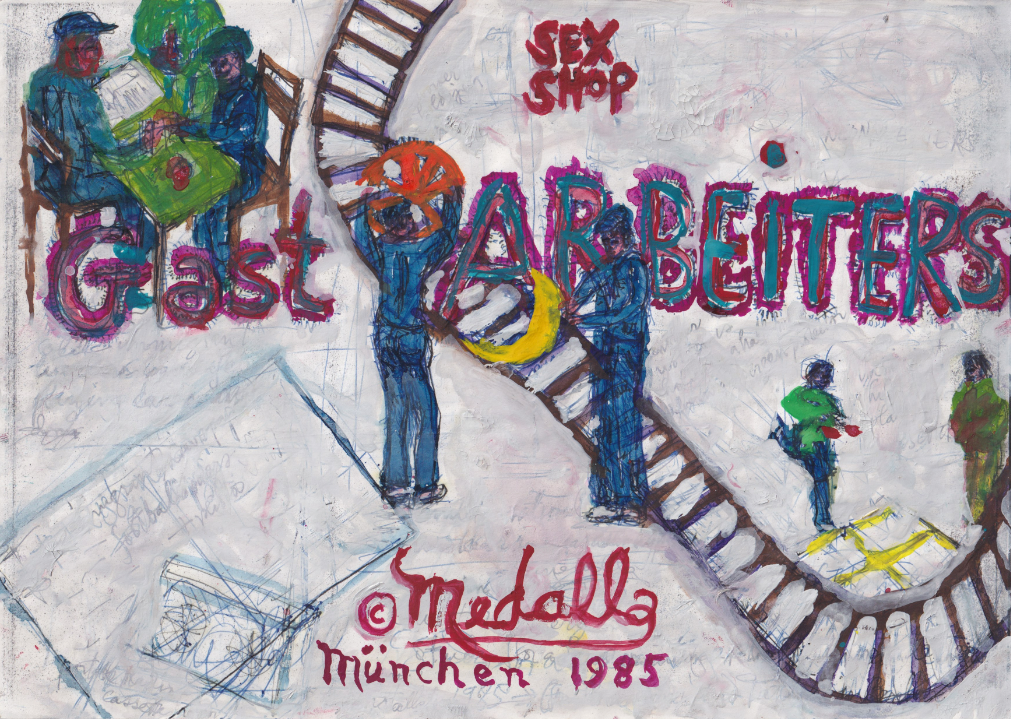 Openly queer at a moment when homosexuality was punished by law, Medalla came to formulate an ethics without moralism, a melancholia taken out of darkness, to share the light of living as a social, engaged celebration. This engagement manifests in the work of Medalla as friendship, and friendship here means to methodologically hold together a politics of cohabitation and one’s own mythologies, even if that factually leads to convulsion. This convulsion can be what Medalla calls “moments of spirit”; an event that can happen in the interior and exterior of the self, pierced by history, and simultaneously by consciousness. This convulsion is perhaps what he also calls “atomic beginnings”. The process that led up to Parables of Friendship, Hellberg and Cairns write, reflects on that logic.

In the second chapter of the exhibition in Bolzano, after an extended period of ongoing work with Medalla, Bart van der Heide explores Medalla’s “kinetic vision” as it pertains to identity – drawing out the much-overlooked queer strands in his work, and the important oscillation between his own artistic output and direct action, or activism. Medalla lived in many cities, including London, Paris, New York and Manila. The experiences of migration run throughout his work, although he would never call himself a migrant. The ephemeral nature and perishability of his performances and impromptus, captured only in writing and photographs, would sustain the lightness of his nomadic rhythm. Medalla sincerely practiced freedom and movement that not only crossed boundaries and borders, but were powered by identities in motion. His work exists in multiple realities beyond a dominant paradigm of the real, moving between the material and the transcendental.

“I always felt at home wherever I was at any given moment in time.”

It takes time to observe the slow-moving bubbles ascending and dissipating in a caravane of uncontrollable columns of soap and air. Cloud Canyons, his most iconic work, is featured also in Szeemann’s documenta 5, in Okwui Enwezor’s exhaustive exhibition Post War at Haus der Kunst, Migrations at the Tate Modern, and as a decisive piece in Parables of Friendship, while infused with observations such as of the artist (of “auto-destructive” practice) Gustav Metzger, who described it as “a quarter million forms continuously changing, reflecting, growing, disintegrating”. It is an example of, alongside his sand and mud machines, what Medalla calls “auto-creative” artworks. Auto-creativity, a virtue he attributed not only to objects but also to beings, form the core of Medalla’s kinetic art. This sculpture was conceived at Signals Gallery in London, a space devoted to international kinetic art that Medalla co-founded that same year. Art critic Guy Brett describes it as a “foam [...] allowed to follow its own aleatory paths, emerging and forming according to its own energies interacting with gravity, air currents, atmospheric pressure, and the shape of the containers”. 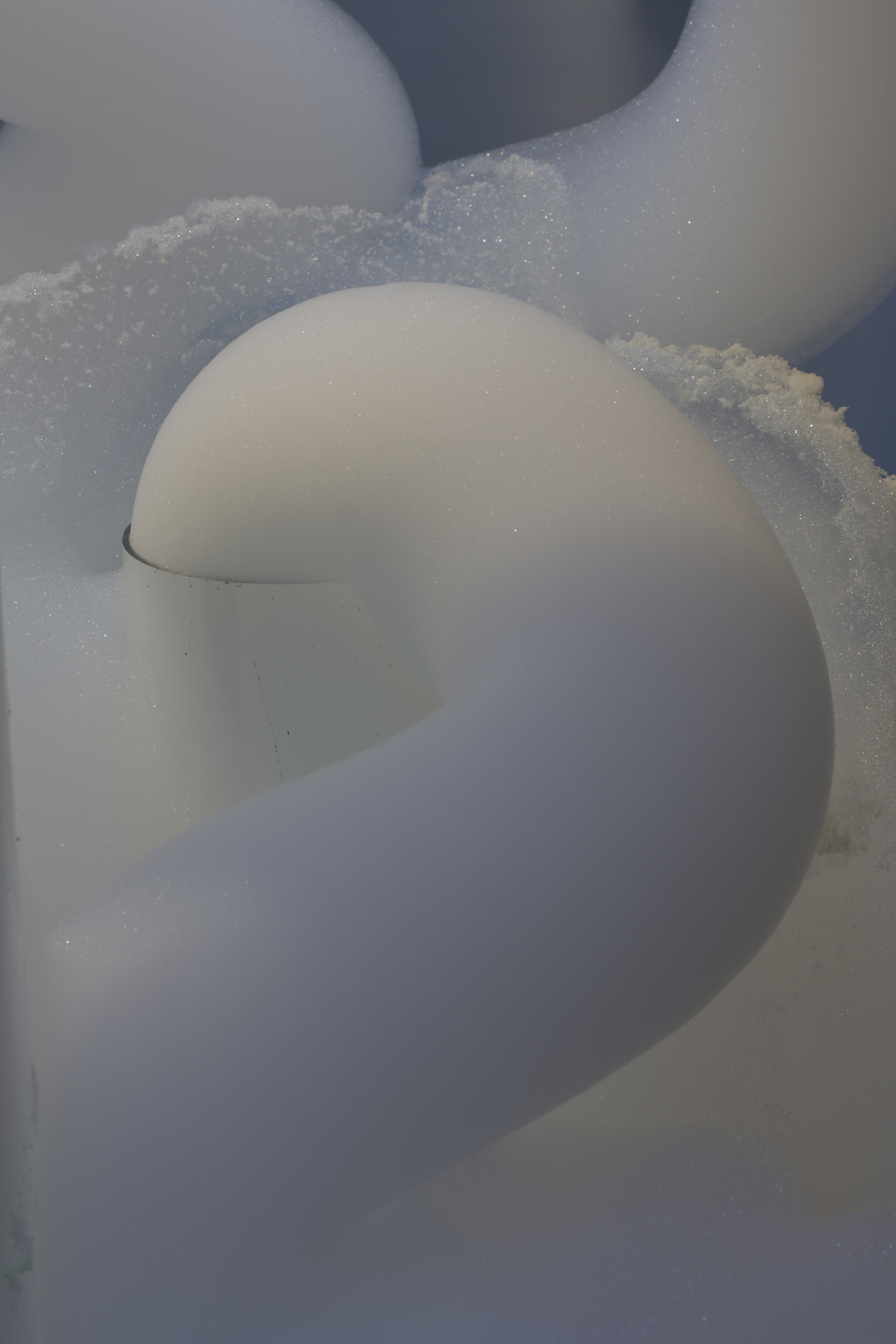 Instead of making it an exchange of things, Medalla focuses on the arts as an exchange between people. Social interactions happen to be more relevant for Medalla than formal abstraction, and yet, this abstraction – Cloud Canyons, for example – turns into the embodiment of all his memories together. Despite the difficulties that he faced through homelessness and solitude, he made sure to always collaborate with artists. Sometimes it is not really stated clearly, what it is that Medalla wants to give. Still, he confronts unilaterality. He lets us know that we live in a world where most of its inhabitants feel powerless and invites us to leave that inertia. Exit the market. Orient towards each other. Overcome capitalism through commons. Look beyond the horizon of the art world.

Medalla is an enigma to the world, but it is through him that its most sublime aesthetic orders pass. Unexplainably, he maintains the boundary between spectators and artworks alive, as a membrane between personal interpretation and the most complex forms and motions. In both chapters of exhibitions, the publications and associated events, we seek to explore Medalla’s practice with precision and care but also with a sense of its spirit and life. That is, a long-running and in-depth exploration of Medalla’s work in a non-museological context, reflecting on the spirit, ethos, energy and radicality, for its historical importance as well as its significance in the present moment. What we can learn from him is the compatibility of courage and softness. Of confetti and silence. Capturing all these dichotomous pairings in a constant embrace, writing this text between both exhibitions in two cities, contemplating the poles between the war in Ukraine and the solidarity manifested by the world, Medalla’s exhibition feels like a gift to our perception.