On the artists' quest to connect the dots between different histories of struggle.

An archipelago could be a space to reflect on the possibilities of sharing equality. How to share the same space, and how to use it collectively. Collaging videos, photographs and archival materials, Bouchra Khalili pieces together a story of immigration and the rights attached to this civil status, between two different neighborhoods of the city of Oslo. This story is not about Khalili herself, but about a community around the issues that arise in her projects.

Khalili’s micro-narratives and portraits of resistance of suppressed individuals accompany me in my first walk through the norwegian harbor. I find a spot in which people bath in the sun and jump casually into the salt water. Motivated by the natural way of enjoying social distancing of the people, I undress and immerse myself in a surprisingly deep shore. The darkness of the waters is even more impressive. It’s like looking into the texture of an alternative historiography out of the burdens of history. And that is what Khalili mediates. This kind of feeling, smooth and vernacular at the same time. She meditates as a poet and a witness to history, inspired by both Pier Paolo Pasolini’s conception of civic poetry, the individual who uses public space and public speech, speaking from one’s subjective position to articulate a collective voice; and Al Halqa, the oldest form of street performance in Morocco in which the public storyteller operates as the historiographer of the people and its “living archives”.

The names can’t be heard, but the voices of the people determine the narration. This story is not about profiles, though, but about meeting people. This act is, in front of Khalili’s projections, always about listening. Mingling with statements on inequality, loneliness and despair, historical events are opened to be reviewed. For example, Jean Genet’s visit to the US in the 1970’s. The solidarity he offered to the Black community, even if only visible through the academic lens, awakens the passionate affiliation of people to the struggle against racism started by the brutal death of Black individuals and the response by a heterogenous group behind the Black Lives Matter movement.

„But who is the witness? The one who speaks beyond death? The one who speaks for (…) those who can’t speak anymore? The ones who can’t speak anymore, but whose memories remain with us?“ asks one of the women looking deeply into Khalili’s camera. It is in this moment, in which I looked into the eyes of the speaker, that the exhibition transformed into a metaphor for the BLM protests in different cities around the world, after the logic of space in Khalili’s 'Archipelago', which understands pretty much as a colophon of the display of work in the two venues of OK and Fotogaleriet.

"The people that speak in Khalili’s films turn somehow into an alter-ego, into further coordinates of a huge cartography of people's will that are yet not written, not visible, but vivid in a collective memory."

Since the films and photographs resemble a sense of community through absence and oral history, they show what happens when people start a movement through introspection. The people that speak in Khalili’s films turn somehow into an alter-ego, into further coordinates of a huge cartography of people's will that are yet not written, not visible, but vivid in a collective memory. This cartography grows on a territory, as far as geographically and discursively it might get through every new 'chapter' in the artist’s practice, while it all becomes an embodiment of unity. 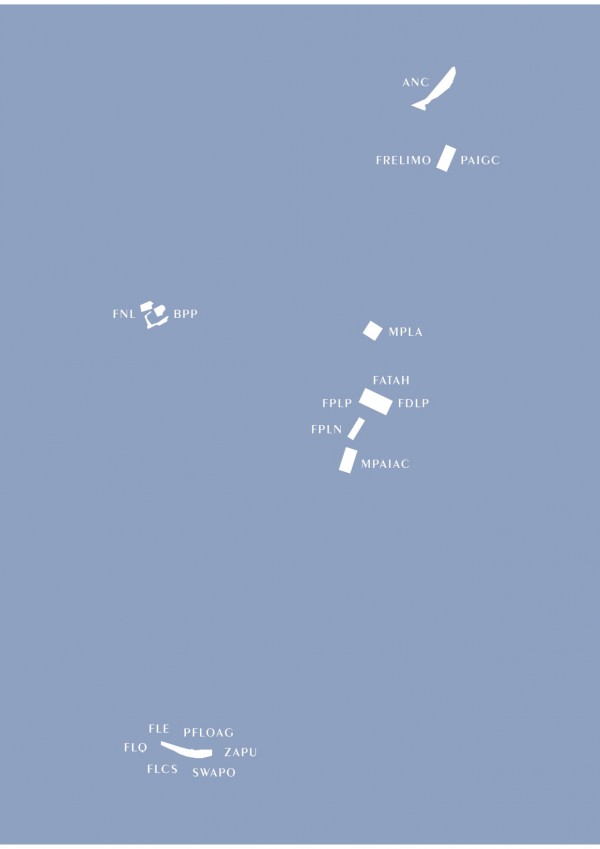 FDLP / Democratic Front for the Liberation of Palestine

FPLP / Popular Front for the Liberation of Palestine

FLSC / Front for the Liberation of the Somali Coast

MPLA / Popular Movement for the Liberation of Angola

"The foreign offices we need to cross for unity" and "The Archipelago" were published in print issue 13, "Eurothanasia"