The Power of the Cut

Heartfield objected, and he objected with images, disseminating posters and magazine covers, and pioneering political resistance through photomontage.

It is the end of August and I am late in writing this text. It is hot and humid and the British government has just prorogued parliament in a smug and ugly move that puts the reasonable world on the back foot. Horrified, I see our genteel mature democracy appear to stumble. In America too, those friends who held such faith in their system of checks and balances are watching them splinter and fail. Power, corruption and lies are at it again. Unashamedly, they are pushing and pushing and finding that the fabric gives way easily: resistance has lost resistance. The world feels like it’s turning rotten again and we are watching it happen – tick-tock tick-tock – in real time. 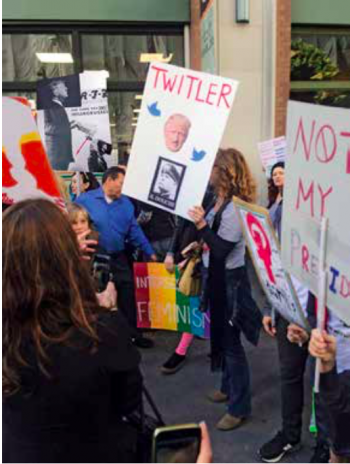 We know about the period in which John Heartfield lived. Every day, he must have observed and overheard the incremental dismantling of the norms of his reasonable world. I well understand that those interwar years were far from normal. Nonetheless, he would have watched the tick-tock tick-tock of the just knowable difference go from bad to worse in the everyday of his regular life. Heartfield objected, and he objected with images, disseminating posters and magazine covers, and pioneering political resistance through photomontage.

Analogue mediums have always insisted on their material resistance to force a relationship between elements, and photomontage used the resistance of paper. A photo- graph, a newspaper or poster has its own identity in the world; its resistance is in the immutability of its scale and its materiality. For Heartfield, there was no shrinking a newspaper to make it fit; he would have had to cut it down. There was no repeating an image unless he had copy of it. To enlarge a photograph without its negative would have meant his rephotographing it on his copy stand. There was no equivocating with photomontage, no save or delete, no working in the electronic realm without repercussion. Heartfield’s method was direct action; the medium compelled his hand and elicited meaning through the rupture and displacement of the available elements. His scalpel forced a decision. This was the collagist’s process: the pursuit of the work, aided and abette by what did not work until it did. 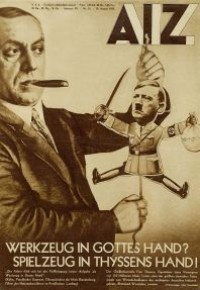 Heartfield handled his images without corruption of sentiment or doubt in his judgement; he also handled them fearlessly and judiciously. The age gave him the material but the courage was his own. His montages showed the violence of the truth years before the world witnessed it with its own eyes. Heartfield was right; he saw the ugly underbelly and revealed it. His work dealt irrefutable blows in its time and, as a result, persists into our own. We better understand the brutality of his age through his resistance to it. His skill was in the economy of his imagery and the candour of its delivery that hit directly at the nerve of the state.

Photomontage belongs to the analogue age and does not appear to have an easy equivalent in these digital times, for I have been looking for one. Political friction is found more often in Twitter and opinion and talk-show satire, with visual resistance on the wane or submerged in the morass of digital photography. But as the reasonable world scrambles to keeps its voice heard, it might be time again to take visual cue and courage from the hand crafted directness and political acuity of the photomontages of John Heartfield. And I see it beginning in the homemade banners and signs at recent demonstrations and in the appropriation of billboards: the unequivocal power of art to cut straight to the passerby with a jolt. Yes, the era is different, as are the means of expression, but the parallels are growing daily. What has not changed, nor can ever change, is the trust in the power of the human imagination to resist.

Tacita Dean's text was originally published in the catalogue of the exhibition "John Heartfield, Photography Plus Dynamite", edited by Angela Lammert, Rosa von der Schulenburg and Anna Schultz on behalf of the Akademie der Künste, Berlin. Courtesy of the author and the Akademie der Künste, Berlin.