The Queens of Asparagus

Opinion on the front lines of Germany's asparagus harvest

This year, there will be no parades for the Queens of Asparagus; no elaborate crowning ceremonies, street fairs, or public appearances. In pictures that run on the front pages of the newspapers, the Queens pose alone in fields covered in white sheeting, in polyester gowns and plastic tiaras or linen dresses and floral wreaths, smiling broadly, holding baskets of the white vegetable. Like all of us, they are attempting to stay cheerful despite their fate.

Every year, the appearance of white asparagus in the markets and supermarkets heralds the arrival of spring in Germany. An entire asparagus-eating etiquette has been developed for Spargelzeit, or asparagus season. Spargelzeit is a compound word built from the roots for Asparagus and Time. It is, quite literally, Asparagus-Time: each Asparagus-Time, with the pleasure of the first jacket-less days and special asparagus menus posted outside every restaurant, is more like the other Asparagus-Times than the Times Without Asparagus by which they are framed. To celebrate, each village with a significant asparagus-growing apparatus crowns its own Queen of Asparagus, who serves as the ambassador for her town and its crop. To quote the press release about this year’s Queen of Asparagus Beelitz, Gina-Luise Schrey, 20, who was awarded her position by the Board of the Beelitz Asparagus Association, "she has an equally beautiful and exciting job awaiting for her...she knows that the volunteer work of The Queen of Asparagus means a lot of effort. One date will chase the next: from the fields to the restaurants. She is already looking forward to the weeks when she can advertise it in dress and crown, with Schnitzel and Hollandaise sauce.” The Queen of Asparagus appears at street fairs in towns and cities, she distributes signed photographs in which she poses: sometimes clutching the stalks in her hands, sometimes distributing them from a basket, sometimes lying in the fields in her sash and gesticulating wildly, as if at the very fecundity of the Earth. 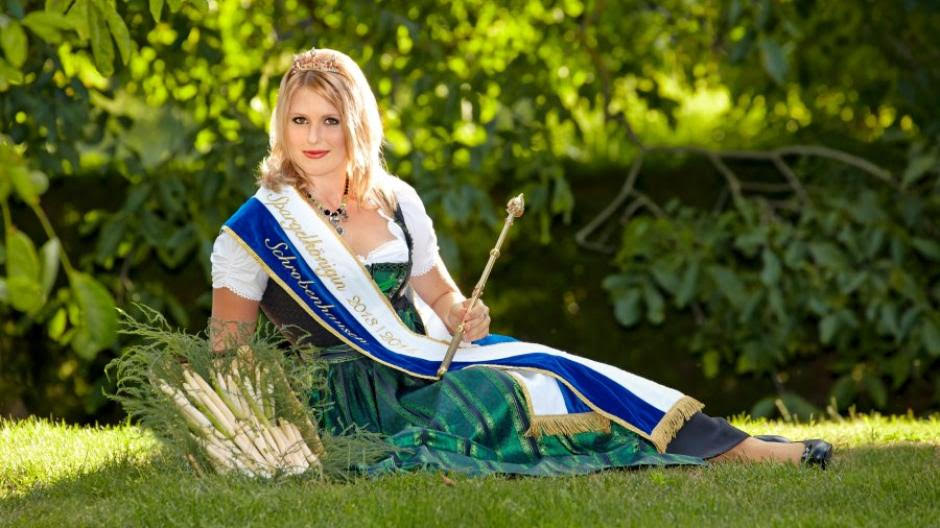 Serving as The Queen of Asparagus is a major honor. A friend from a small town in the former East knew a girl who was selected in her senior year of high school. No one saw her for months, she was so busy with her duties. Of his town, this friend said recently, on Facebook, everyone who hasn't fled to the cities are, and I quote: "a) afraid, b) bitter, c) accommodating themselves, d) Nazis themselves or e) laudable exceptions." It is in these towns in the former East, in regions with high unemployment, where the high-speed trains that go from city to city do not stop and where town centers are full of boarded-up shops, that the Queens of Asparagus are most prominent.

Growing white asparagus is enormously labor-intensive. In early spring, when the spears first start to break through the ground, white asparagus must be kept from all light: first buried under mounds of earth, then covered with sheets of fabric. There, protected, the spears remain soft, mild-tasting, and, of course, pure white. The centuries-old associations between whiteness and purity are both aesthetic and racial. The festivals at which the Queen of Asparagus is crowned are sometimes called Volksfeste: literally, this means ‘people’s festivals,’ but ever since the 1940s the word Volk, with its connotation of the nation as body, as pure community. The Queen of Asparagus, as a tradition, is often considered embarrassing by urbanites: she, and her celebrants, are deemed völkisch: literally ‘folksy,’ but with connotations of racism, of nationalist populism. In towns like Beelitz, towns where the Queens of Asparagus reign, the Alternative für Deutschland, a far-right and anti-immigrant party with openly fascist elements, tends to pull large percentages of the vote. It is, of course, impossible to deliver white asparagus to German supermarkets during its short growth cycle without enormous amounts of labor; most of which is done by low-paid migrants from countries further East. It is low-paid and back-breaking work: each stalk must be delicately and individually dug from where it has been embalmed.

Due to measures taken against the spread of the novel Coronavirus, borders in Europe are now closed. There was mass panic that the asparagus might rot in the fields. Julia Klöckner, Germany's Minister of Agriculture (and herself a former Queen of Wine) initially suggested that out-of-work waiters could go to the fields; the AfD, in an odd echo with the Chinese Cultural Revolution, suggested sending university students, to near-universal scorn. Klöckner’s next salvo was to suggest that asylum seekers who had not yet been granted work permits should be allowed to do the work. The German constitution declares that the full worth of every human is inviolate. Its provisions on the treatment of asylum-seekers have regularly violated and altered since reunification, with Friedrich Merz, a favourite to follow Angela Merkel as CDU leader and Chancellor, favoring the revocation of the right to asylum. It seemed Spargel could suddenly change all that: that Syrians and Afghans not white enough for German society could be purified and integrated by the asparagus, in a culinary laying on of hands. The people in the cities joked that “the full worth of every asparagus is inviolate,” the farmers griped that no one could learn to cut asparagus with only a week’s training. 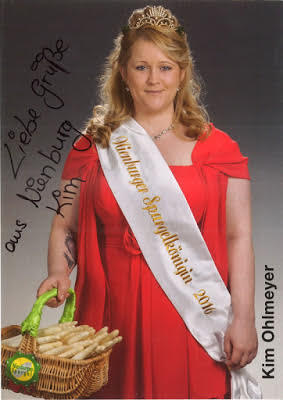 The panic ended as quickly as it began: hasty deals were struck between embassies so that the tens of thousands of Romanians and Hungarians and Poles who come Germany to pick asparagus, alongside other crops, can enter. 20,000 refugees from other countries remain stranded in COVID-stricken camps (on Greek islands, and other places) and German federal and state governments drag their feet, refusing to help.  Due to the pandemic, it was announced that the asparagus pickers would both live and work with greater distancing to protect their health and safety, although how this would be enforced was not made clear. Three weeks later, the first migrant worker died of COVID-19, having come from Romania to pick white asparagus in the fields outside Freiburg. He was 57 years old, and had no previous illnesses. Given that he had entered Germany almost a month before he died, it is likely he contracted the illness here.

On the same day, the English language media was full of articles praising Germany's leaders for their scientific and cautious response to the virus. As always, the German response to disaster is at least doubled: there is science and caution and care for the chosen (the bourgeois citizen, the 'expat') and something very different, something far more closely resembling the disaster capitalism of a Trump or a Johnson, for the migrant worker, the refugee, the permanent underclass in the East, the Southern European country asked to slash its health care system to satisfy the bailout demands of German banks. Angela Merkel is described in English-language media as the leader of the free world, as a beacon of competence and compassion in the face of boyish, brash, irresponsible, and selfish right-wing populists. The difference between Germany’s response, which Anglophone liberal commentators praise, and their domestic responses, which they deride, is, as it turns out, mostly a question of what kinds of people are exposed to the front lines of disaster capitalism, and whether or not those are the same kinds of people that create and are seen by the media.

Despite right-wing adulation, the German countryside is in every sense overlooked. The country's cultish devotion to balanced budgets hinders investment; the high-speed train from Berlin to Munich that crowned the country's recent infrastructure campaign bypasses small towns. Left-liberal and urban-alternative Germany alternates between embarrassment at the völkisch traditions of the countryside and ignoring that part of the country entirely. The essayist Christian Bangel, writing about his home province of Brandenburg (which surrounds Berlin and whose Queens of Asparagus I have been mostly discussing here), writes of a childhood as an East German Young Pioneer, a teenage life being chased by Nazis through the streets, a young adulthood living uneasily in Hamburg and Berlin. “The worst part,” he writes, “was not the kicks of the Nazis. The worst was the feeling that no one was particularly interested in the turmoil after reunification. Nobody would help us, not even when there were murders.” Brandenburg, and the other provinces of the East, have become pariahs in much of the West for their high AfD vote totals. Rebuild the wall!, some West Germans joke, often using its official name from East German state propaganda, Antifaschistischer Schutzwall, anti-fascist protection wall.

Which way would that wall face? Bangel points out that Brandenburg is in fact more progressive, legally, than many of these Western states: it has voting at 16, for example, and gender parity in its state parliament. If it has been the site of many acts of spectacular racist violence, then so has the eminently West German North-Rhine Westphalia, where on February 19, a gun-toting fascist murdered 10 people in shisha bars for motives the local police still refuse to plainly and simply identify as racist. It was not the Minister-President of Brandenburg who went on national television and argued for the opening-up of his province by calling it a “land of kitchen-builders,” variously blaming virologists and local governments for his inability to ensure that reopened schools wouldn’t be disease vectors, but the Minister-President of North-Rhine Westphalia, the eminently centrist and sensible Armin Laschet from the eminently centrist and sensible CDU. It was the eminently centrist and sensible Christian Lindner and Wolfgang Kubicki of Germany’s unusually appalling liberal party who brought accusations that virologists were somehow ‘politicizing’ the crisis to the front pages of German tabloids. 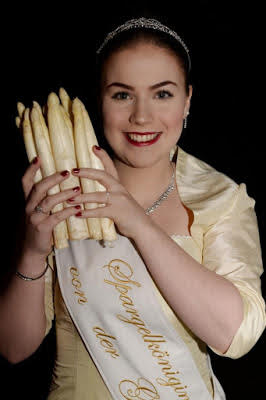 Jessa Crispin has sharply described a certain kind of urbanite winner’s narrative about country people, “familiar and flat” descriptions driven by an urban audience’s desire to understand apparently incomprehensible political choices in which they, themselves are uncomfortably complicit. We #StayHome and have our packages delivered and wonder why essential workers go to the park, we post a meme or two about welcoming refugees, we mock the “country people” who vote for the right, and we eat the asparagus picked by migrants putting themselves at terrible risk for terribly low pay, migrants who can expect to net less than 1800€ for three months of work, after paying off the middlemen for their transport and paying the farmers for their lodging. The German government struck deals directly with these middlemen. Now one of the workers is dead.

This year, maintaining social distancing, the Queens of Asparagus have had to crown themselves. These crownings are reported on, even in the city papers, which, as always, pandemic or no, in whatever century we find ourselves, describe country traditions with an air of cynicism that betrays deep investment in these small seasonal rituals: in the coming of warm weather, in the donning of a dress and a crown, in the temporal collapse of Asparagus-Time. This cynicism also betrays a terrible innocence; a pandemic of refusing to see, which is without season.