When storytelling reveals more about the world than any kind of theoretical attempt ever could.

To read about architecture is an abstract experience. Theory books have never given me a sense of the comprehension I seek. I never truly understand how architecture works, only how it looks. What I couldn’t grasp were the intricacies, the elements of social and human interaction, until I read Gang Leader for a Day (2008) by Sudhir Venkatesh.

The book tells the story of Sudhir Venkatesh himself, a student at the University of Chicago and “A Rogue Sociologist that Crosses the Line”, who wanted to find out why black people are poor. Venkatesh now teaches at Columbia University in New York. Instead of following the methods pioneered at the University of Chicago and now known as the Chicago school, he went looking for empirical evidence and joined members of the gang Black Kings for almost a decade. Venkatesh spent most of this time at the Robert Taylor Homes, the largest public housing project in the USA and the site of some of the most inhumane architecture designed to reinforce racial segregation. What Mrs. Bailey, the tenant leader of the projects said to him, sticks with me still: “You want to understand how black folks live in the projects. Why we are poor. Why we have so much crime. Why we can’t feed our families. Why our kids can’t get work when they grow up. So will you be studying white people?”

Not long ago I spent a year in Chicago and witnessed the importance of oral history, and how the power of a story and the poetry of the everyday, can change minds. It is also considerably more intimate and real than the history I found in most books. The architect Paola Aguirre Serrano and artist Tonika Lewis Johnson, who are committed to racial equity and justice, and more specifically invested in Southside neighborhoods, sparked my interest in spending more time in that part of Chicago. I joined some events where people spoke about the unwritten stories of their communities and how social media has given them a voice. Nevertheless these stories lack space. Here is Mrs. Bailey again: ‚But don’t make us the victim. We’ll take responsibility for what we can control. It’s just not that everything is in our hands.’

Siddartha Lokanandi from Hopscotch Reading Room, a bookstore in Berlin, recommended the book to me. I asked him why. “I try to read people so that I can understand what they want to read. You like storytelling. You want to understand the inhabited world via practice rather than theory. This book offers excellent insights into architecture for people who are intentionally overlooked.” The nearly four miles of 28 16-story buildings, including 4,321 apartments, that were built in the 1960s were demolished around the turn of the century. 99% of the 27.000 inhabitants were black. It was the largest government-sponsored ghetto that was the size of a small city. I ask Siddartha why it is important to learn about this atrocious act of housing policy: “It explains the lives of people under poverty and what they could and couldn’t do under such conditions in a very convincing matter. It was, and is, an intricate dance of trying to survive in the place where you live, or had to live.” Siddartha continues to speak about books in general.”Some things you never know, until you read about them. These stories explain to us outsiders sitting comfortably in our chairs. Stories about what went wrong and continues to go wrong.” Before I leave his book store in Schöneberg, Siddartha says one thing to me about the act of writing a book that I cannot get out of my mind: “All of us in this world have one great book in us.” 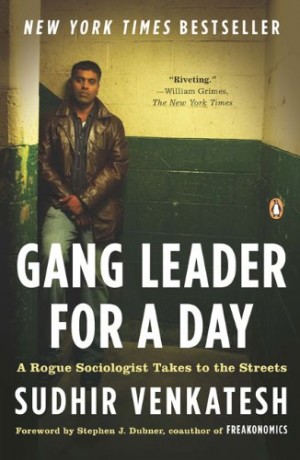 Gang Leader for a Day by Sudhir Venkatesh, 2008