NOTES ON GRAZ: ON DISTANCE WITHOUT SEPARATION

This year’s Steirischer Herbst places its focus directly on the ongoing war in Ukraine.

Styrian Autumn, a three-meter high printed tapestry by Fritz Silberbaure, depicts the idyllic fall harvest scene on the eastern edge of the Austrian Alps with yellowing fields, charming little houses, close communal togetherness and the bounty of food collected for the arriving winter. Dated to 1939, it was in that very autumn that Nazi Germany invaded Poland, officially starting World War II. Silberbaure himself joined the Nazi party a year beforehand and was the proud recipient of the Anschluss Commemorative Medal for his activities that bolstered the annexation. Yet for him, the autumn of 1939 was peaceful. Far from any frontline, Graz was always referred to as the GenussHauptstadt, the capital city of pleasure and consumption enjoyed for its green pastors, food, wine, and of course, art. 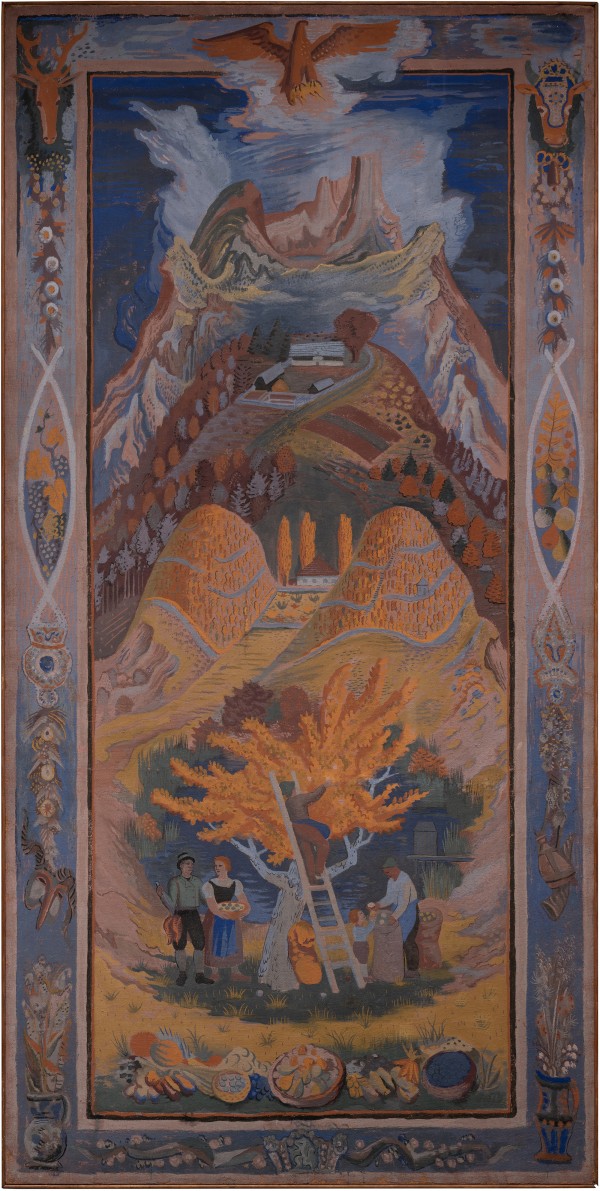 Under the title A War in the Distance, this year’s edition of the Steirischer Herbst had its curators revise Graz’s historical reservoirs, which remain dormant beyond the autumn weeks of this festival, one of Europe’s longest running critical art events. Under the artistic directorship of Ekaterina Degot, curators Mirela Baciak, Christoph Platz, David Riff and Barbara Seyerl offer a re-reading of the collection of Modern art from the Neue Galerie Graz. Highlighted perspectives of conflicts and wars are contrasted or complemented with works by contemporary artists. Guided by associative connections forking from bellic horrors, this historical revision reveals that even if technically distant, the wars fought left their mark on the city and its cultural production, as one can witness directly in a painting such as Karl Jirak’s Landscape with Refugees from circa 1945-50, where packed carriages at the bottom right of the canvas seem to throw the harmonious scenery out of balance. 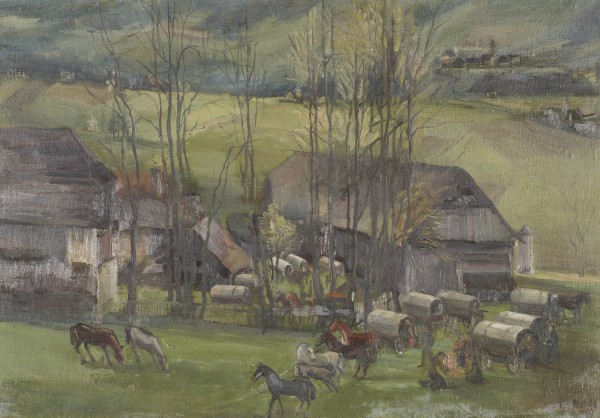 The first room of the exhibition at the Neue Galerie Graz takes on whiteness through the imagined ideal of purity that traversed modernity from Malevich to the White Cube, and in so doing sets the tone for this institutional re-examination and the decolonial gesture at its base. An actual white cube also rests on the lawn in front of the historical entrance to the building which has been reactivated specifically for the exhibition as part of the curatorial endeavor. The cube, constructed out of metal taken by the artist Zhanna Kadyrova from the Ukrainian frontline, is pierced by countless bullet holes. Painted white and made to a perfectly square shape, Harmless War (2022) resembles classic minimalistic sculptures such as those of Donald Judd, yet hit hard by the realities of violence. Unlike the clean modern contemplation of shape and form, Kadyrova's sculpture is made of an actual matter of war; Its bent metal around the holes  is a frozen testimony to the bullets that busted through it. 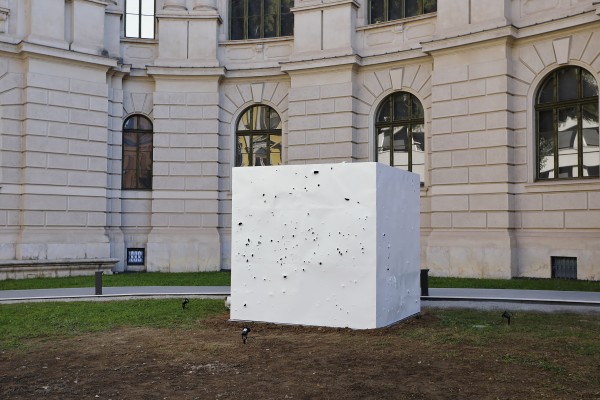 Kadyrova also handed out stickers to the visitors that depict a Russian-made rocket mid-flight and instructions to stick them on windows in the public space around their homes. The artist herself placed many of them on windows of the trains and buses around Graz which she then filmed and edited into a video piece (Russian Rocket, 2022). The rockets' steady movement across the serene Alpen landscape seen through the windows is an ominous sign. With this simple public space intervention, Kadyrova conjures an impactful analogue augmentation of the space around it. Even a significant distance could be covered in seconds when so intended; the protection of the glass window might be thinner than we think.

Inside the building, sounds of air raids echo in the impressive foyer. Originating from Mykola Ridnyi's film Seacoasts (2008), the sonic interruption re-articulates the 17th-century building and generates an alarming sense of restlessness in the visitors. In the film, we see fishermen on the coast of the black sea. In the foreground, jellyfish keep dropping from the sky. Landing in front of the stationary camera, their fall synced with the added sounds of distant military planes. Made in response to the Russian aggression in Georgia and Abkhazia, Ridnyi's video, like Kadyrova's works, unsettles the calm scenes and underlines how quickly an idyllic scenery can turn sinister. 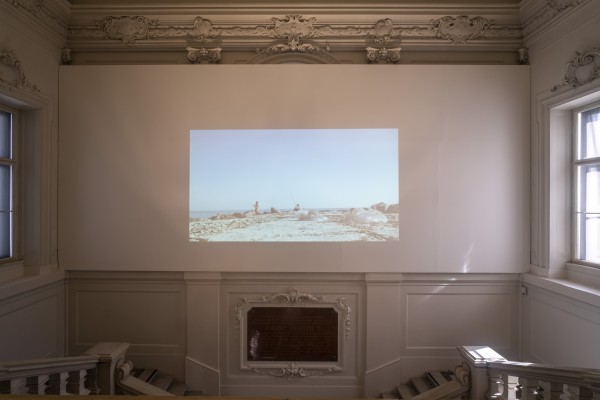 What should we do behind the safe distance of the glass? What could art do in times of turmoil, and how should it go about doing it? Or, more specifically — how can a well-funded art event in the middle of an Alpen “pleasure region” react to the crises around it? Indeed, the biggest achievement of the exhibition lies in the fact that it doesn’t attempt to talk “about” the war, or even about “a” war, but rather question the very existence of the above-suggested distance and the alleged idle-detachment of specific “peaceful” strongholds from the world around them.

One of the main assumptions of the Enlightenment aesthetics is the need for such an appropriate distance from the object of appreciation in order to judge it properly (objectively). Emmanuel Kant, when analyzing the (dynamic) sublime, emphasizes the need for separation between the spectator and the terrifying, bewitching event. In other words –– a mountain storm can only be considered aesthetic from behind the window of the forest cabin. When assuming the safe position of the spectator, according to Kant, the experience could produce the feeling of the sublime– that negative pleasure that “allow(s) us to discover within ourselves a capacity for resistance of quite another kind, which gives us the courage to measure ourselves against the apparent all-powerfulness of nature.”[1] This position, as many in that historical moment in Western Europe, assumes a separation between the contemplative subject and the object of appreciation. The pleasure here is hence created by our (imagined) sense of resistance and withstanding against the terrifying powers that seek to dominate us, or even worse — that do not even see us in our own humanity. 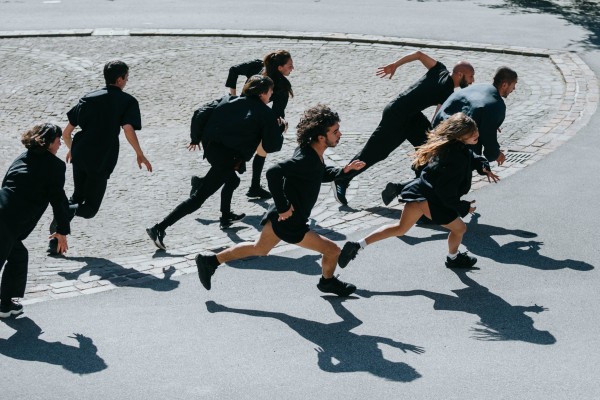 But, in the words of poet John Donne: “No man is an island, entire of itself.”[2] These words were recited again and again in a segment of Boris Charmatz's durational performance ​Noli me tangere: A Happening for Herz-Jesu (2022), while performers collected members of the audience one by one and brought them together, hand in hand, moving awkwardly at the foot of the Herz-Jesu church. Is this distance, like the subject-object separation it entails and as the exhibition in Graz in many ways shows, a mere habit or is it an illusion? “Each is a piece of the continent, A part of the main,” the performers continue to recite. The last two rows, probably as well-known and widely quoted as the first, read:

never send to know for whom the bell tolls; it tolls for thee.

Perhaps this is the call that comes out of Graz: funeral bells that ring in a church in the Styrian autumn, and we are no mere spectators. This ringing could be thought of as a reminder of how this nestled region of pleasure is in fact reciprocal to that “distant” suffering, directly and indirectly, economically, historically, politically, and geographically.

The Steirischer Herbst art festival is on show in Graz until the 16th of October, 2022.