DO YOU BELIEVE IN LIFE AFTER OIL?

On Experiences of Oil at the Stavanger Art Museum, Norway.

What am I supposed to do?
Sit around and wait for you?
Well, I can't do that
And there's no turning back

Cher’s iconic single Believe came out in 1998, immediately becoming an international sensation. Encapsulating the optimistic energy of the last decade of the millennium, it was also the first song to use Auto-Tune. The effect that since then completely altered the music industry has a surprising origin: it was developed based on an auto-correction algorithm used to render seismic sonic waves into subsurface maps. This sound analysis is the tool that oil companies use to assess where underground oil deposits might be lurking. Hence, the sonic lubricant that reshaped our listening experiences over the past decades shares its origin with the main energy source that has heated up the world since the 20th century. Unleashed from subterrene deposits of condensed time, purified dinosaur bones turned into nectar of pressed histories poured out of wells across the globe, inflaming the desire for speed and progress.

In December 1969, oil burst through the drill pipes at the Ekofisk oil field, about 300km southwest of Stavanger, Norway, completely changing the course of the small Northern European country. Last month, about half a century later, the exhibition Experiences of Oil opened at the Stavanger Art Museum, part of a long research project headed by Anne Szefer Karlsen and Helga Nyman. Bringing together sixteen artistic perspectives relating to nations touched by the black gold, the exhibition tries to imagine a cross-national alliance or affiliation between peoples in oil-producing countries. Focusing on the cultural phenomenon, identity formations, and emotional implications fueled by oil, the show asks to shift the gaze from the ecological to the social, as much as the two are, in this case, at all separable. The works in the exhibition vary in media and form. Some were hand-picked by the curators, and some are commissions that take form through the duration of the exhibition. In some works, oil is explored as material, while in others oil is but an echo emanating solely from the context. Together, the selected constellation expands in many routes, revealing a spectrum of oil-related perspectives, like the iridescent rainbow exposed when oil floats above water.

The exhibition space in the Stavanger Art Museum is covered with veined natural stone tiles, which together with the cool lighting, bestow a cold and grayish tone on the works. At the entrance, one encounters the work of New Delhi-based Raqs Media Collective. Placing the foundation for conversing, the work 36 Planes of Emotion (2011) is composed of coloured plexiglass sheets in book-like forms and sizes. Each sheet carries an arrangement of nouns that seek to give a name to new and complex forms of emotions, such as ‘a hydra of headstrong desires’ or ‘a chaos of awakened wonders’. On the occasion of Experiences of Oil, Raqs Media Collective invited local poet Øyvind Rimbereid to respond to their artwork. Written in a hybrid language, Rimbereid compiled a series of poems under the title AFTR OJL (2021), which fuses together Old Norse, English, German, Lowland Scots and Frisian with the local Stavanger dialect, to create poetry written from the future perspective of Stavanger in the year 2480. The short poems are as opaque as they are transparent, intelligible to a certain extent through different languages as it focuses on the closeness of these languages, on their grammatical similarities, sounds, and shared origins.

In the center of the main space, gradient yellow and blue fabrics hang from the ceiling. Entitled Fantasia, descoberta e aprendizagem (2021), the Portuguese for imagination, discovery, and learning, the two-part work deals with oil-based multinational connections. Made out of oil fibers, half of these textiles were used by the colleagues of the Brazilian-born artist Kiyoshi Yamamoto in a demonstration in front of the Rio de Janeiro headquarters of Petrobras – a local oil company strongly supported by the Norwegian company Equinor. Unfortunately, we only learn about this activation of the piece from the wall text. Presenting some documentation of the demonstrations would perhaps increase the work’s effect and would aid, paraphrasing on the words of art historian Nora Sternfeld, in kissing the petrified object of conflict awake. On the other side of the wall, in the second participatory part of the work, Yamamoto invites the visitors to make their own friendship bracelets. The names of the four different multicolored, oil-based threads – Openness, Passion, Partnership, and Resolution – are the self-declared values of Equinor’s Brazil division. The drawings instructing how to firmly tie the threads together remind more of binding and bondage than of a mutually supportive relationship. 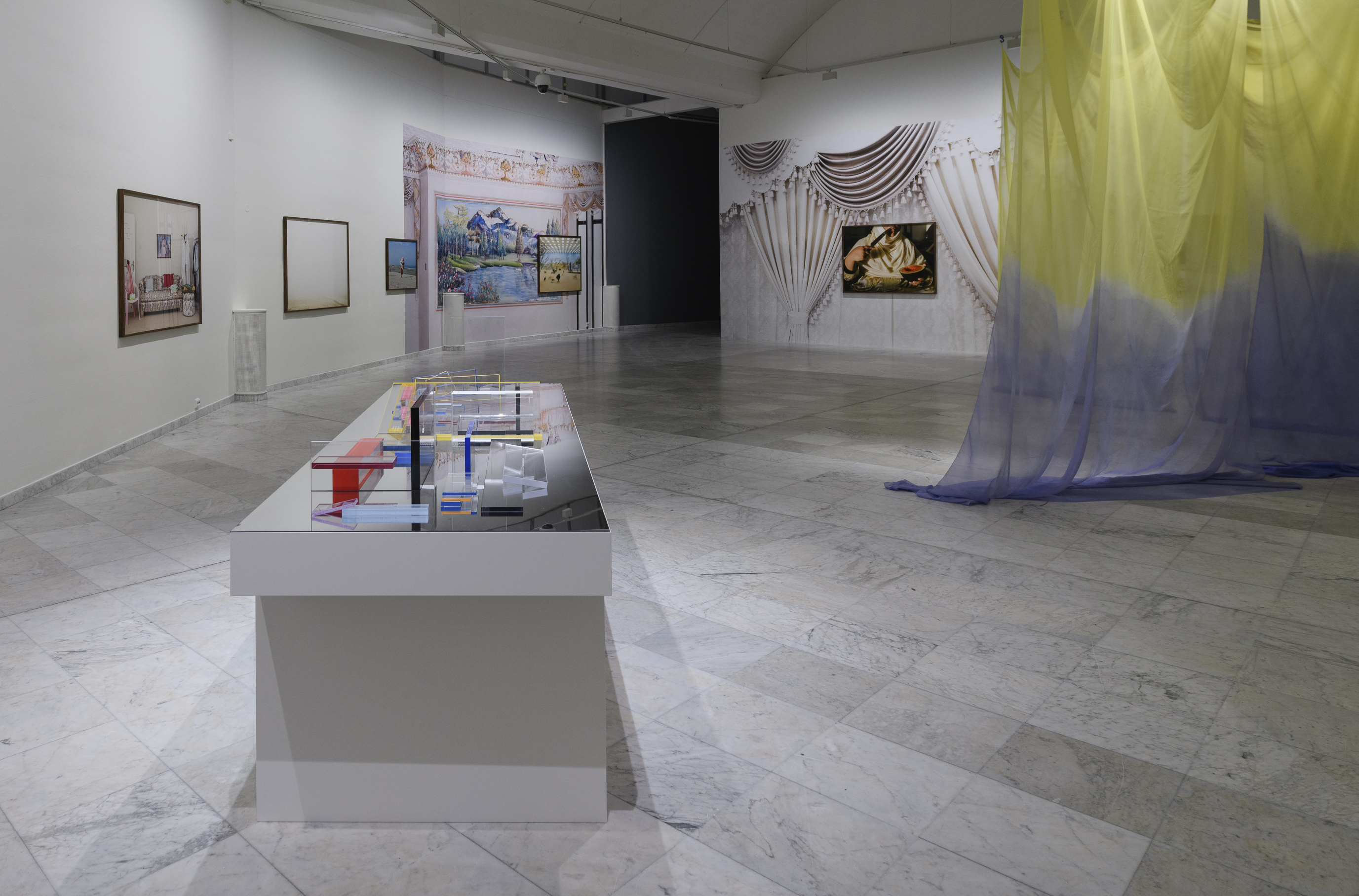 Echoing across the exhibition space is a hammering sound on-repeat, similar to that of the sonic guns used in the search for underground oil reserves. It originates from Apichatpong Weerasethakul and Chai Siris’ film Dibar (2013), which documents the daily life of a Bangladeshi construction worker in the United Arab Emirates. The beating sound places the whole space under the constant rhythm of progress and movement, as a constant reminder of the hidden and evident ecologies of labour that surround the boundless oil-infused accelerations. Levitating magically in mid-air, Monira Al Qadiri’s 3D printed sculptures OR-BIT 1-6 (2016-18) are modelled after drill bits used for penetrating the earth in search of hidden riches. Calling attention to the affinities between extractivism and sexual desire, these sassy, teasing, objects reflect the tension between pain and pleasure. Iconically resembling medieval torture devices, the beautiful iridescent shine reflects the light around them. In this slow yet constant spin, they flaunt the seemingly unstoppable movement of human desire. Like the Tower of Babel, Icarus’s soar, or Julia Ducournau's Titane for that matter, the OR-BITs double as a flamboyant doomsday clock. Unbothered by physical resistance. 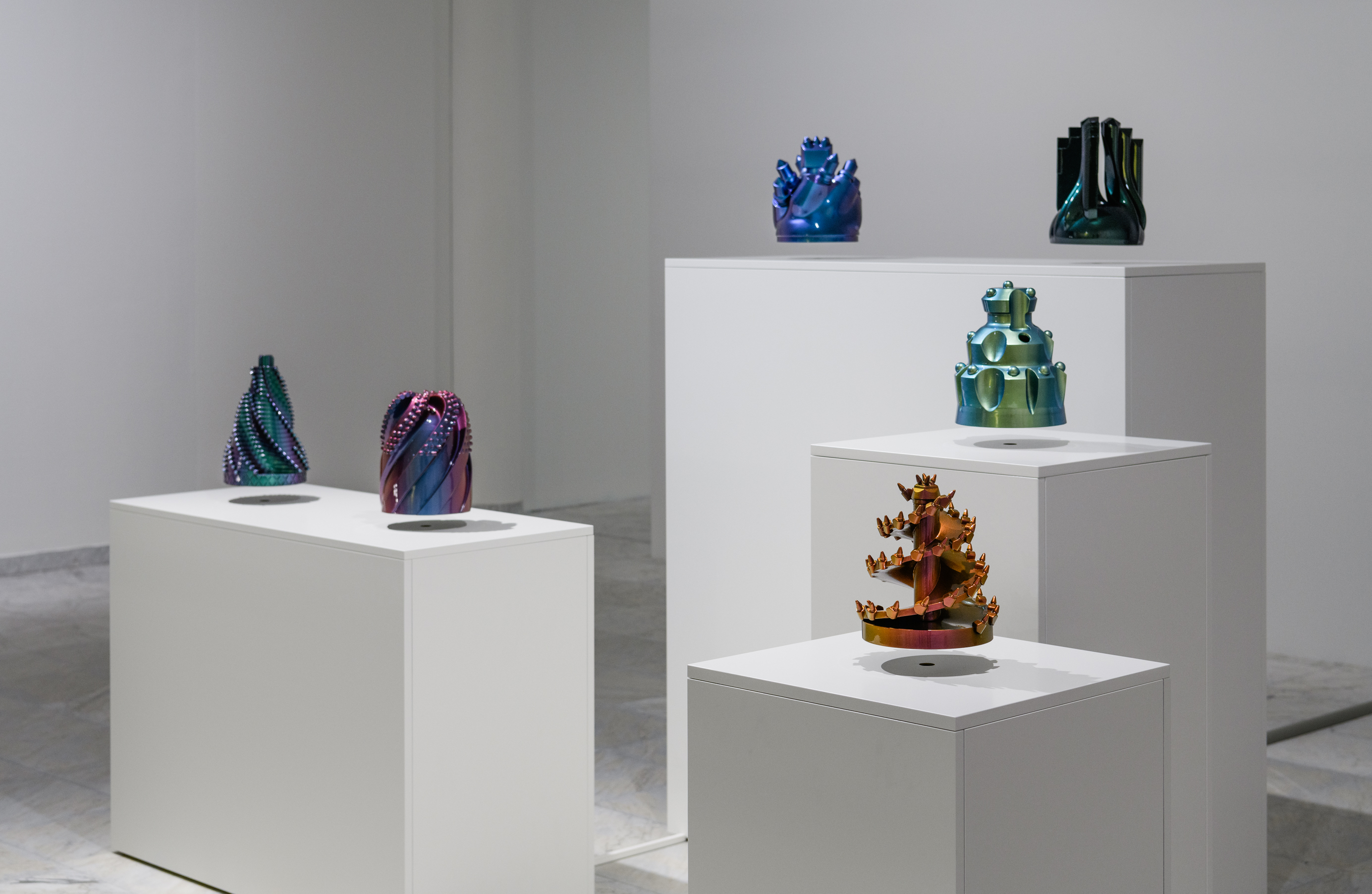 In some works, like Shirin Sabahi's tender film Mouthful (2018), oil is a protagonist. The film documents the restoration process of Noriyuki Haraguchi’s Matter and Mind (1977), an oil pool installation at the Tehran Museum of Contemporary art. Alongside the film, Sabahi presents a collection of items found while cleaning the pool, most probably tossed by visitors wishing to test whether this dark, mirror-like surface is indeed liquid. Farah Al Qasimi’s captivating photographic installation Arrival (2015-19) reflects on the relation of identity formation and photography in the Gulf region, which like Norway, was completely transformed by oil wealth. In a separate, dim-lit room, Otobong Nkanga's polyphonic sound installation Wetin You Go Do? Oya Na (2020) invites the visitors to a sonic immersion of different voices, languages, emotions, and attitudes, all sung by the artist herself. Like Rimbereid's poems, the listener, like the reader, does not necessarily get the direct meaning of each sentence. Here too it's an exercise in listening to the opaque, to the tones and rhythms. 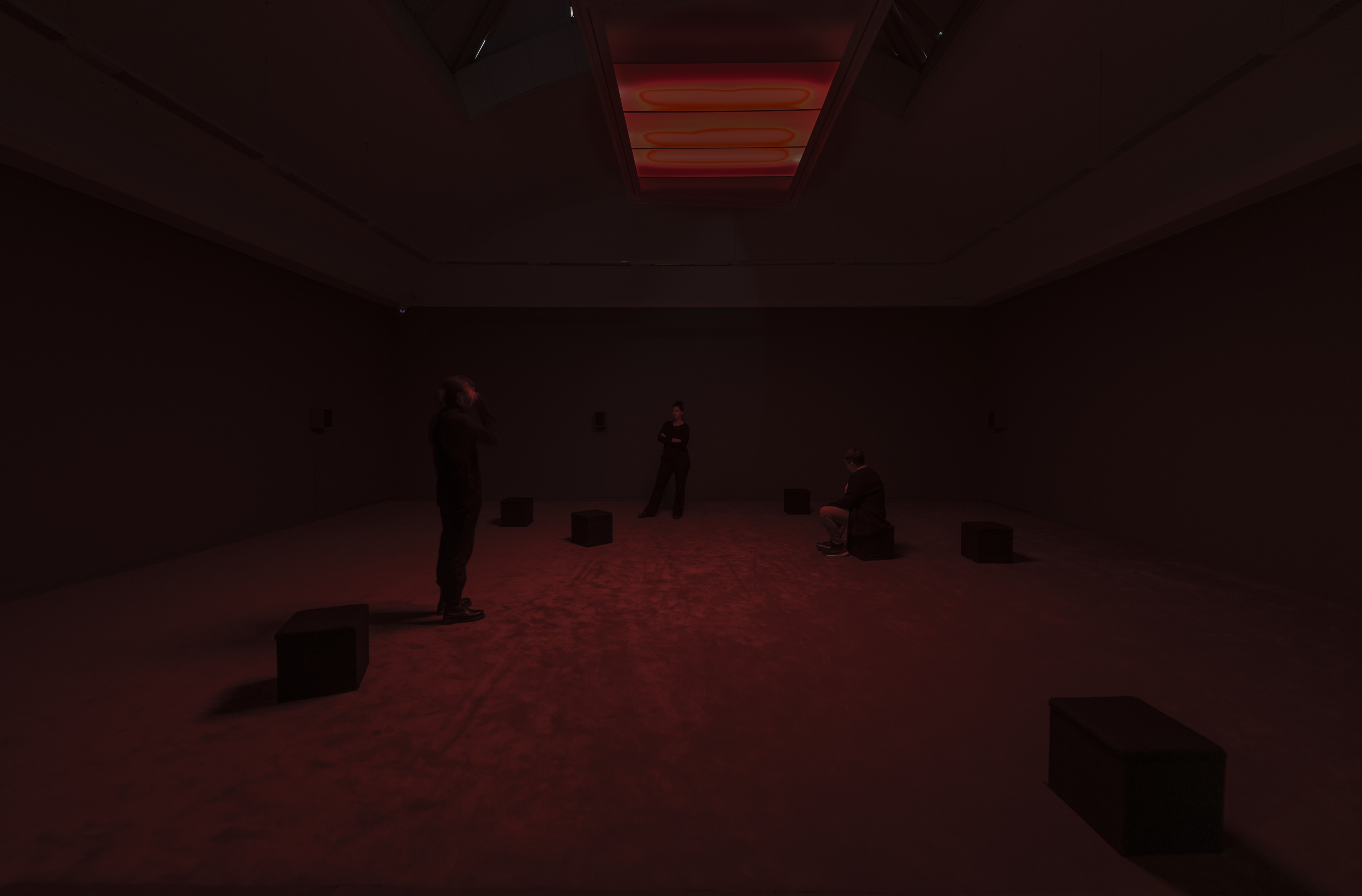 Yet it is the demanding and alarming split-screen presentation of INFRACTIONS (2019), an hour-long film by Rachel O’Reilly, that brings forth perhaps the most urgent perspective with regards to the contemporary experiences of fossil energy sources. The film follows the First Nations-led anti-fracking campaign in Australia’s Northern Territory. Hydraulic fracturing, which directly threatens the water sources of the region, involves pumping mud, water, and chemicals into underground gas deposits, forcing pressure that eventually cracks the rock formation open and releases the gas. The new plans for fracking in the Northern Territory, encouraged by the federal government’s desire to undo the economic damages of COVID-19, could result in the release of tremendous amounts of greenhouse gasses and contaminate freshwater sources with toxic methane and other industrial waste. Most of this gas will then be transported and sold overseas. Germany, for example, is the biggest consumer of liquefied natural gas in the European Union, which is by itself the world's biggest consumer market. And yet, gas is being marketed as a 'cleaner' energy source in comparison to oil, a claim which focuses on the burning process itself while ignoring the heavy environmental costs of its production, including underestimated emissions. By giving a platform to local community leaders, artists, and activists, the film opens a window onto the fight against exploitation, where the First Nations peoples and the ecosystem are on the same side. In the words of professor Irene Watson (Tanganekald, Meintangk Bunganditj), who helped to phrase the UN Declaration on the Rights of Indigenous Peoples, in her interview for the film:

As Western Europeans, you are so long in your disconnection from your own stories or from your own laws of the land. But what is critical from our space is that we retained those connections. And when we are talking about water we are not thinking about water as a commodity or a resource, it’s a being of itself. An autonomous being. It’s a relation.

This is precisely the perspective that could counter extractive capitalism: a perspective that is attentive to the reciprocal nature of all things. Adopting this attitude and understanding the cardinal role Indigenous communities take in caretaking for the ecosystem we all rely on, could begin to untangle the petroculture desire for acceleration. Opening up the neighbourhood suggested by Experiences of Oil of those touched by oil, to enhance a coexistence of more voices, like the physically neighbouring Sami whose livelihood is already threatened by the rising temperatures, is key in shifting the destructive course of the global economy.

Petroleum oil is undoubtedly one of the most significant building blocks of contemporary life at the beginning of the third millennium. How then to escape the fatal honey trap constructed by this iridescent lubricant of locomotion and heat? The artworks carefully selected for Experiences of Oil bring with them different perspectives relating to this expanded theme and form a sleek and well-put-together exhibition. The question is, at the brink of global-scale climate disaster, in a place like Stavanger that so strongly represents the accumulation of wealth and riches from hasty extractivism, is it not the time to switch off the Auto-Tune and start being unbearable?