FROM THIS POSITION OF LOVE

Claiming the value of artistic practice as deep presence in the reopening of Le Magasin - CNAC.

I´ll start by recognizing that I am naïve, that I don't mind being naïve and that, in fact, that naïveté defines me in more ways than one. Naïveté does not limit agency, but it does vindicate tenderness as a political skill. However, there is always someone who equates naïveté with incapacity or who deduces from it a natural inclination to subjugation. Is freedom a result of disenchantment, a right of the rational and the cynical? Is it possible to have strategic intelligence that does not come from love? Let's talk about ingenuity as a feat at the heart of the most subversive artistic practices. It won't be a guarantee of individual success, that's for sure, but it will be a bet on the possibility of arriving together.

Céline Kopp leads Le Magasin - Centre National d’Art Contemporain (CNAC) into its new phase. Kopp’s approach starts with love as theorized by bell hooks — which is to say, as a practice — recognizing “love”  as an action that takes place in a web of temporalities and subjectivities: memory, present, and imagination that makes futures possible. This art center is located in Grenoble, a city open to participatory processes, cultivating collective deliberation in more than one sense. Within this tight weaving of relationships, Le Magasin presents itself as a pioneering institution, the “prototype,” as Kopp puts it, after which French contemporary art spaces of the last 40 years have been modeled. Still, the excessive pressure that the pandemic added to consecutive crises already afflicting the institution led to its closure. Shutting down was a difficult decision; one  that could have jeopardized many jobs and the continuity of a vital space in the social fabric of the city. Radically, the board of funders elected not only to project a reopening, but to maintain all workers’ salaries at 100 percent until the reopening could take place. This gesture translated the confidence in the space and the recognition of the value of the workers into concrete actions, beyond their productivity, beyond whether there were activities, because there were none. 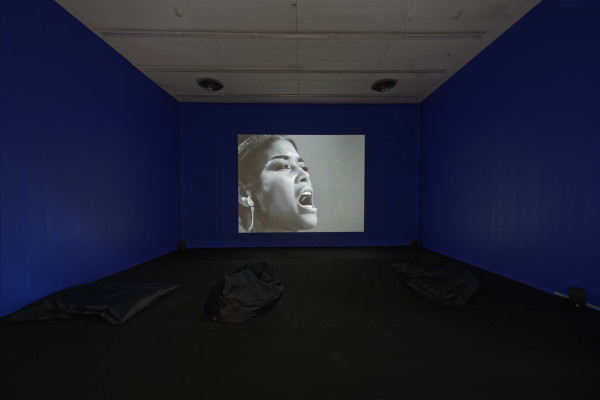 Kopp’s first actions upon taking over management of Le Magasin are indicative of the spirit that can be perceived in the exhibition marking the beginning of this new chapter: articulating the material process of reopening with local collective initiatives, like a commission to reorganize the museum’s interior spaces with studios Cookies and Stromboli Design and a commission to redefine Le Magasin - CNAC's graphic charter with Brussels design atelier Alliage, summoning workers and opening the space to artistic practice. In Kopp’s own words: “The opening was not thought from a manifesto but from testing and exploration. If there are new formulas, they will emerge from practice.” 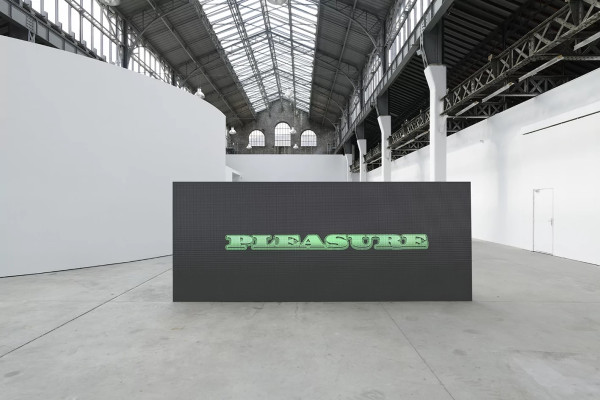 La Position de l'Amour (“From This Position of Love”) (19 November 2022 - 12 March 2023) is the title encompassing the first movements of this new cycle, and refers to both a group exhibition and a program in alliance with the art and design school École Supérieure d’Art et Design (ESAD) Grenoble-Valence, which includes a solo exhibition of works by Binta Diaw, a residency program premiering with Cindy Bannani, and a series of performances and conferences.

It is a journey that, rather than being initiated, is born out of the pain, desire, violence, and liberation of a Black woman's cry in featured artworks like All That You Can't Leave Behind (2019) by Ufuoma Essi (1). This is a work of interweaving audiovisual documents that account for the memory of the Black Atlantic and a hinge piece between the “before” of the exhibition and the “now”, the weaving between the intangible and the material that the exhibition illuminates. From this liminal moment, a series of births and spectral apparitions follow one after the other, bringing meaning back. Threading the exhibition’s works together is a sensibility that recognizes the past and the present as an indivisible whole that tends towards regeneration and movement.

Gabrielle L’Hirondelle Hill’s Desperate Living, for E.S. (2018) (2), explores the material dimension of the ancestral, playing between the mundane and the spiritual. Her sculptural pieces play with scale and value, tensing Indigenous epistemologies with the exhibition space. They are presences charged with power through the incorporation of amulets that are extracted from living bodies. The power of nails and hair to connect temporalities, summon the past or evoke oblivion, is recognized, cultivated, and celebrated both in the Native community to which Hill belongs and in various parts of the world. These garments, obtained by the artist through barter and other forms of exchange based on reciprocity, speak of a memory and ultra-terrestriality that persists and infiltrates the apparent invulnerability of the capitalist system. 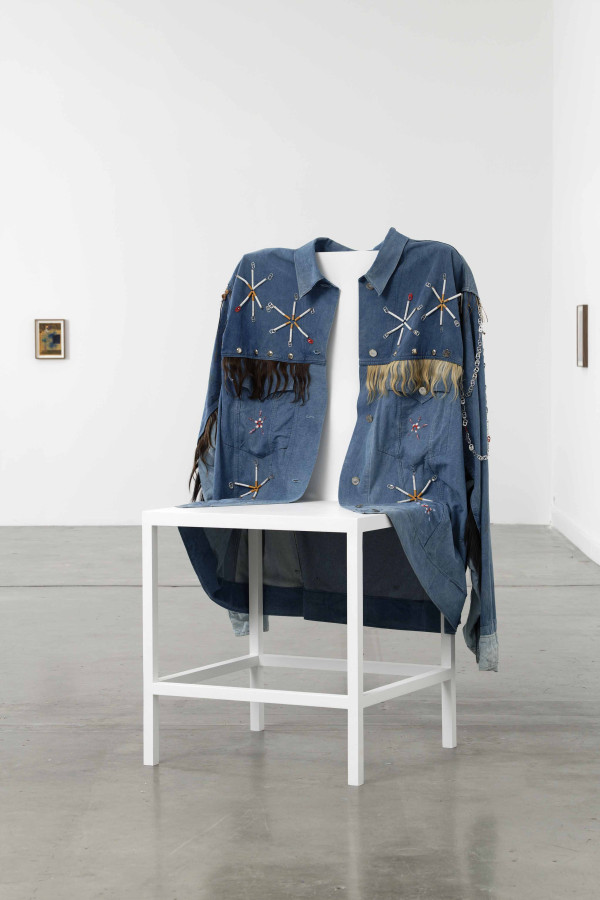 Prune Phi’s Otherworld Communication (2021 - ongoing) (3), a video installation that is part of a larger project, connects with this animist line, not only in terms of mundane economies that transcend the material, but also in the way in which the drifts of traditions — both Vietnamese and  capitalist, where the latter is explored as imposed. In this film, the belongings of the deceased are burned for their transcendence into the immaterial world, but they no longer consist of classic objects of everyday use. Rather, they are imitation Louis Vuitton bags, laptops, and cell phones. Phi examines these derives while questioning her own position in the context of the diaspora, for whom she speaks; the silences she believes it necessary to besiege; what specters to let rest, and what it is up to her generation to shake up. 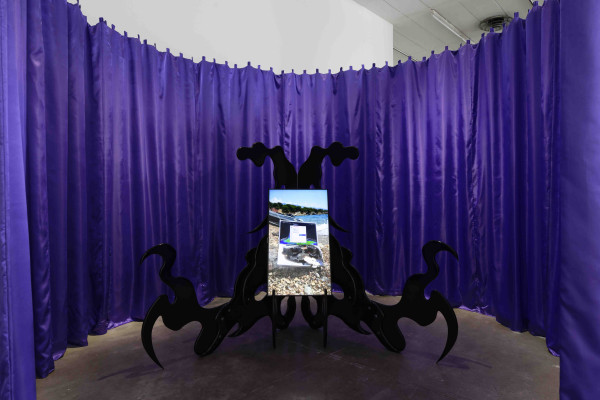 Valentin Noujaïm (4) is also an audiovisual artist and works with digital effects. His piece, The Pacific Club (2022), is part of what will become a triptych about desire and the second generation of the Arab diaspora in the 1980s. The Pacific Club is set during the midst of the emergence of the French ultra-right, in a club in the subway parking lot of the business district of Paris. Like Hill and Phi, Noujaïm plays the role of a medium between those lives, often cut short by the introduction of heroin into Arab communities and racist attacks. “Utopias of a night,” says Noujaïm, about that other Paris, on which the one of wealth was built. 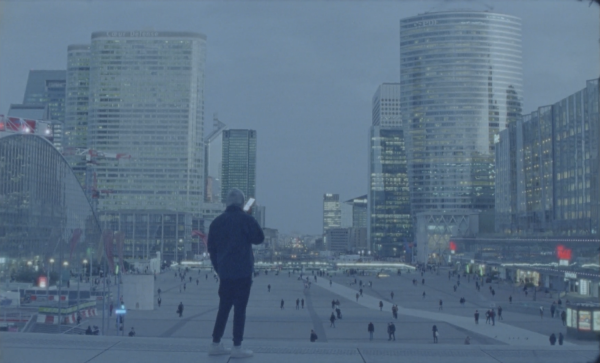 La Position de l'Amour imagines Europe from the heart, which is not easy for us diasporic people. It makes the cracks of the fictions of self-sufficiency, of the fable of integration and the monuments to fraternity literally built on the ruins of clandestine pleasures, speak, sing, and shout. The position of love, says Kopp, is that of recognition and memory, but also that of regeneration and transformation; of honoring through desire: caring as much as letting go, knowing how to create a hospitable place for the different; for the new.