PROFILE: HOW TO SHELTER A PAINTING?

Phillipa Horan is a storyteller like no one else I know. Every time we speak on the phone, we ponder on London's realities and reminisce (naturally without nostalgia) in a past that now clearly shows why we live in such unbearably unjust circumstances. Where paintings end up and where people end up seems to be the glue for our conversation on “The Landlord is Coming”. Three bodies of her work are part of this issue. The Scented Auction Paddle Paintings (2014), Score (2011) and A Drowned World (2019), from a series of male nudes, in which Dan Mitchell features as a model in a bathtub.

"I'd like to think I'm moving house because I am not able to travel anymore," she says. A quick mind needs a change of scenery now and again. The auction paddles were made in L.A. at a residency in an easier time - 2015. "They are angry paintings though. And really more about the art market flipping pieces and making a commodity good out of artistic work, rather than the actual utensils that create the commodity good." 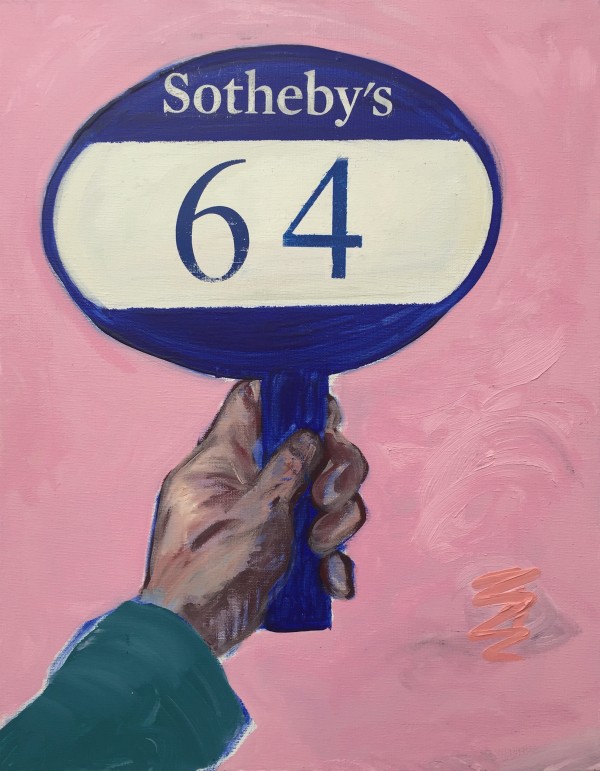 Like a takeover, an act of assuming control of something, Horan painted them in a bubbly manner, much like the optimistic high a bidder gets when a lot is finally theirs. Full of the joys of 'spring' (and by that I mean the word’s political terminology), the adaption of the lightheartedness in its visuals reverses the grotesque beliefs of consumerist ideology. Soaked in essential oils, the canvases show paddles from the two biggest auction houses, Christie’s and Sotheby's, and the bright candy colored lots in their backgrounds. "They really are lost paintings" Horan mentions. "I left them in a famous poet's shed in Hancock Park and never got them back. They must still be in there, but I really don't want to bother his daughter to claim them back." Oh how delightful the suits stored with it must smell of cinnamon and vanilla. 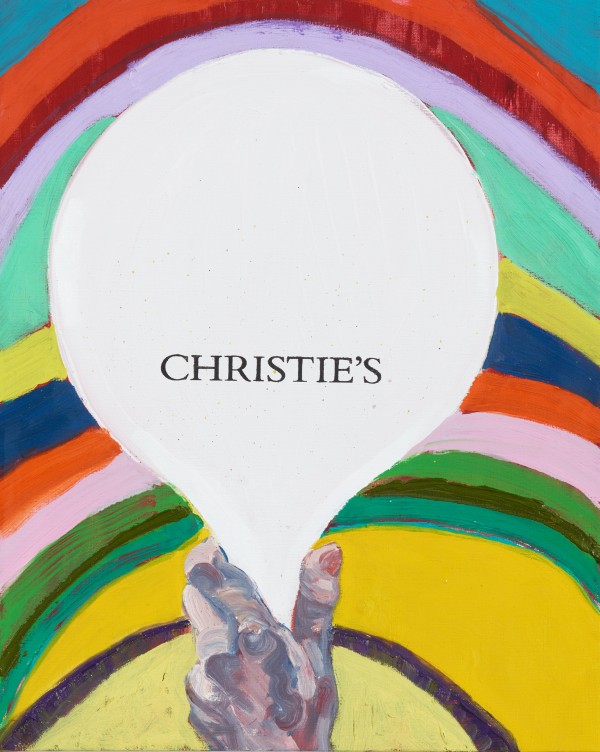 Imagination is fueled by not having what you want.

… or what you need. Space is political, as is relying and depending on others. Lacking the certainty of a roof over her head, Horan works in a too expensive studio. "It's not worth it, the electrics are dangerous and it's cold." But housing for art is also a privilege. All spaces in London that could be studio spaces are rented out to photo shoots and brands - the creativity industry’s companies that fuel monetized imagination. “It works, people like to think of themselves as creative.” Phillipa says. More than merely a positive attribute or individualist sense of pleasure, going to huge craft stores and describing yourself as creative on a dating app became an actual asset. In this pandemic, the need for humans to be competent, and to feel like they have some control over their existence, quickly led to a DIY boom. When you can learn to make and mend things in your own home through YouTube, ‘safe’ from the threat of outside disease vectors, the idea of creativity shifts too. “People don’t care about artworks any longer,” Phillipa ventures. How does our relationship to artworks change when we are deprived of experiences like visiting museums or attending concerts, I wonder?

Aside from the trending focus on handmade items and craft supplies, the aspirational urge of our idle hands could, when attending to the problems around us, even offer opportunities for (self-)reflection, giving way to not yet known conceptions of art and  interdisciplinary connections? 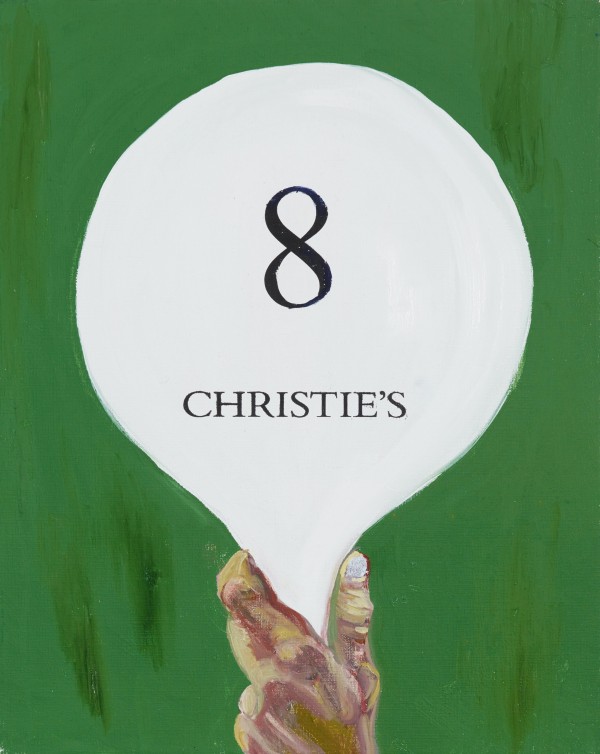 Phillipa’s "Score" paintings came into being between the anxiety shared spaces offer and the loneliness the streets provide at night. They were made in an empty arch in Bermondsey. "It was open to the elements in front, but was sheltered from them in the back," Phillipa remembers.

The images of the performance, in which the paintings were activated, show a professional climber ascending the paintings, as if on an artificial rock wall. The attached holds, the rock fragments, are oversized HARIBO sweets made of synthetic resin and are attached to a sound system in the back. Upon gripping the sweets, the climber’s touch coaxes music out of the painting: segments from the intro of Oedipus Rex.

Oedipus, as a model for the human capacity to fall from great heights, subtly resonantes not only with the composition of these three score paintings, which by the way were all sold to Saatchi Gallery, but also with Horan’s overall work process. She moves, almost dances, through the inherent frailty of happiness, the quest for  knowledge and the limbo between state control and creating a healthy environment for oneself, transforming anger into lightness. 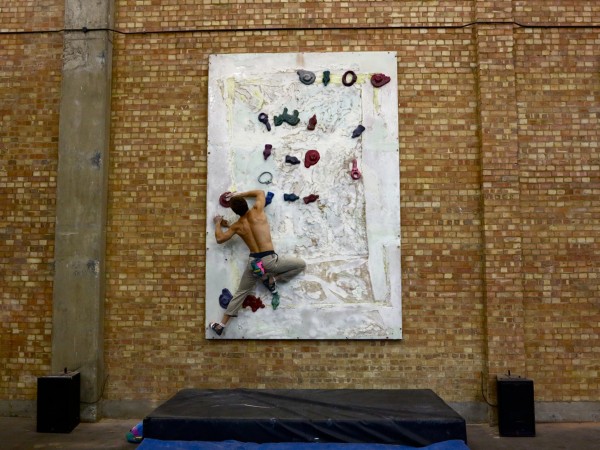 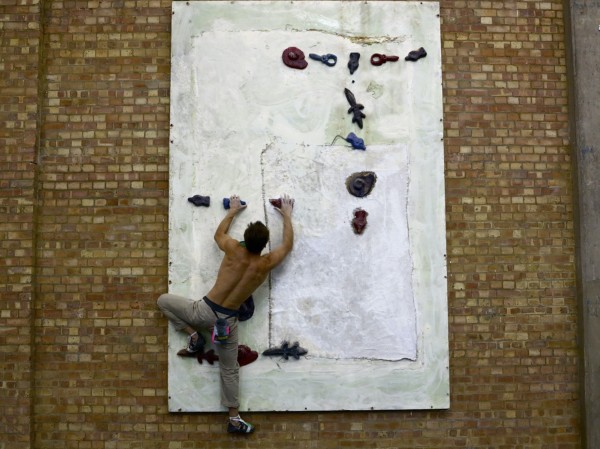 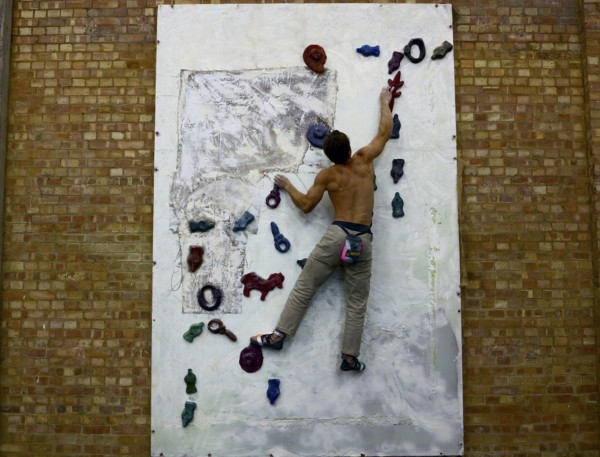