Tracing an unraveling sense of self through anomy and acceleration.

If you had the choice between holding on to your integrated sense of self or letting your consciousness be co-inhabited by an AI demon that helps you to reach your wildest dreams but ultimately outperforms you, which would you choose? Chalice, the protagonist in Life After BOB: The Chalice Study (LAB, 2021-22), did not have this choice. She was implanted with Destiny BOB, an AI-based neural life coach, during childhood in order to optimize path alignment in life. LAB opens a window into a world where software and wetware coalesce, the internet is linked to the nervous system, and where change and the decay of social norms have accelerated to an extent that technological enhancement has become necessary in order to cope. 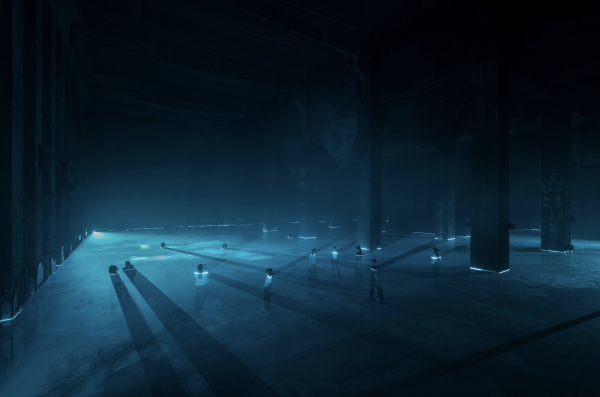 Currently on show at Halle am Berghain, curated and hosted by Light Art Space, Life after BOB: The Chalice Study offers its visitors an immersive experience into the consciousness of Chalice and the world she navigates. This is achieved through interactive technology, light installations and a variety of collectable objects, among them an individualized NFT. When the viewers enter the large hall of the former industrial heating plant, they find themselves in smoke, cut through by moving blue laser light. Eventually, bright lights start to flicker, signaling that the screening is about to begin and viewers descend into the projection room. The viewer's journey through the exhibition prefigures LAB’s plot through its transitory nature and its hypnotic allure. After the screening, viewers’ paths bifurcate into the worldwatching area, where it is possible to explore the 3D world of LAB in the game design engine Unity, and the adjacent merchandise store, where memorabilia in the form of T-shirts, stickers and more can be bought. 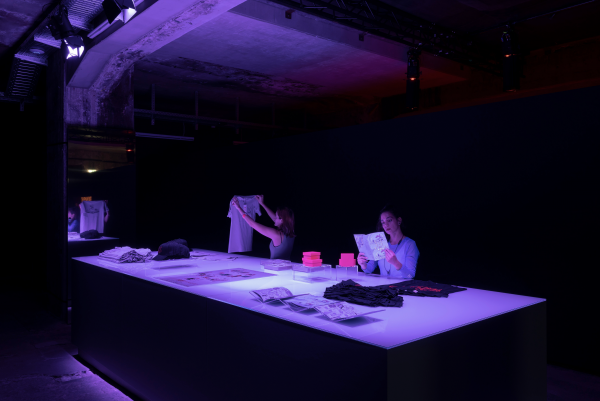 Over the last years, Cheng has experimented with using AI, game design and agent-based-modeling simulations to create artificial life forms that mutate in real time. The latest among them is BOB (2018-19), an acronym for Bag of Beliefs, an AI-based virtual organism that can be ‘fed’ objects and observed in how it grows, learns, and evolves. Among the sources of influences are AI research from Google’s DeepMind and Carl Gustav Jung’s theory of archetypes.

The story of LAB is set in the year 2074, a period called the Great Anomic Era. Life is characterized by perpetual change and uncertainty, brought about by ecological decline and technological advancement. Among the technologies defining this era is the Wavywerse, an infrastructure like an internet of nervous systems. While these developments make up the background of the plot, they draw from our sense of social, political and ecological precarity of our present time. In order to help humans adapt to these changes, the neural engineer Dr. James Moonweed, one of the characters of the movie, has developed a series of AI-based neural apps that assist their users in dealing with the complexity, through providing motivation (Task BOB) or relief from disappointment (Affirmation BOB). It’s software which helps you to better navigate your life, a virtual coach or a technological manifestation of self-help literature: offering ways to become more self-reliant, productive or emotionally resilient. In this sense, the BOBs embody a particular way of governing subjectivity. To use a term developed by Michel Foucault, LAB explores contemporary technologies of the self, the forms of souci de soi present in contemporary cognitive capitalism, and extrapolates them into a form that is both weirder and manifests as a more literal sense of technology. The habitual, symbolic, and cultural mutate into nerve impulse, code, and simulation.

When Moonweed presents Chalice, his daughter, at an annual gathering of the corporation funding his research in order to convince his superior of Destiny BOB’s product/market fit, things go terribly wrong: Chalice’s sense of self is split in two. One version of herself is governed by the AI living in her brain and another is trapped inside a neural simulation, which it will take her a decade to escape from. Destiny BOB manifests her fathers dreams while she is stuck in the joyful but pointless universe of Zoroaster, which is devoted to exploring the unlived subplots of life. The world of LAB can be regarded as dystopian, yet there is a strange optimism of hacking, play, and improvisation at work. Even when stuck in a simulation, you can find a way out – but you’ll need the technological literacy to refactor the codebase.

The precursor to the modality of worldbuilding behind LAB’s production is found in Cheng’s earlier work. In Emissaries (2015-2017), a trilogy of computer simulations, individual agents attempt to act out narrative goals against other agents in the simulation, each drawing their agency from an underlying AI network. How the story unfolded was unscripted and left to chance, taking place live in the screen-projected simulation. In Emissaries Guide to Worlding (2018), a publication released after the production of the simulations that elaborates on the aesthetic strategies, Cheng distinguished between four artistic masks or archetypes necessary to carry out the strenuous task of giving birth to a world. Among them are the Director, who is concerned with stable meaning and providing direction, and the Emissary, whose approach to meaning is more improvisational and whose task consists of adapting to change and nurturing it. LAB has a predetermined narrative and even though it is technically live streamed every time, the narrative outcome is always clear. While the chaotic randomness of the simulation is present, its effects are relatively mild. The fascination resulting from being able to see an artificial life form or ecology grow in real time is absent in LAB. Has the Director taken over, forcing the world of LAB into a stable narrative? 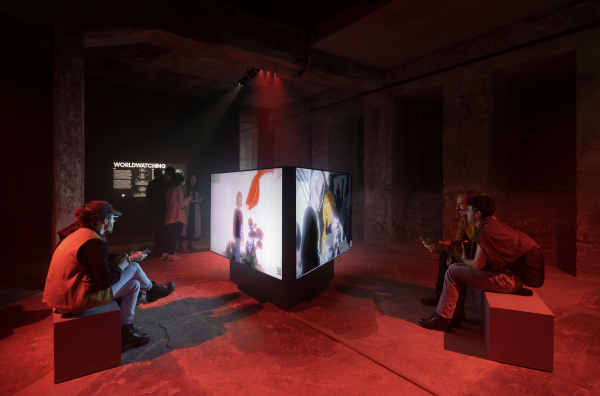 Having been interested in the worldbuilding strategies of novels, movies and theme parks for a long time, LAB marks the first time Cheng chooses film as a container for a worlding project. It draws its depth from storytelling, the possibility of exploring the world interactively, and by expanding its universe through the attached encyclopedia, the LAB wiki, rather than the inherent disorder of simulations themselves. The Chalice Study is the first of eight intended episodes, making up the Life After BOB series. Each episode will portray the origin story of a character, exploring emergent behavior ranging between adaption, degeneracy and indifference. The work on the series will serve as a playground for experimentation with forms of AI-driven storytelling and character development. This is where the work of the mask of the Emissary becomes apparent, continuing the work as an imaginative servant, opening doors into new worlds.

Ian Cheng: Life After BOB will be on show until November 6th 2022 at Halle am Berghain.