IF IT'S CALLED THE TOURIST SEASON, WHY CAN'T WE HUNT THEM?[1]

Only a few years ago, the biennalization of the art world saw roaring, mass-scaled international art events taking place in all corners of the world.[2] Undoubtedly the then-celebrated emergence of the global-contemporary art scene flared hand-in-hand with the exponential growth of the massification or rather democratization of tourism, as this sought to level travel for all.[3] Despite local communities being today exclusively reliant on tourism, we have seen rising antagonism against the industry. In Italy, Barcelona, and elsewhere, civic and anti-globalization movements seem to forcefully demand a stop to mass tourism, while exacerbated citizens treat tourists as a plague that needs to be eradicated. In various cities, graffiti and posters fill the streets with hostility against visitors, while artists and activists join the struggle to demand radical reform to the complicity between the tourist economy and the culture market.[4] 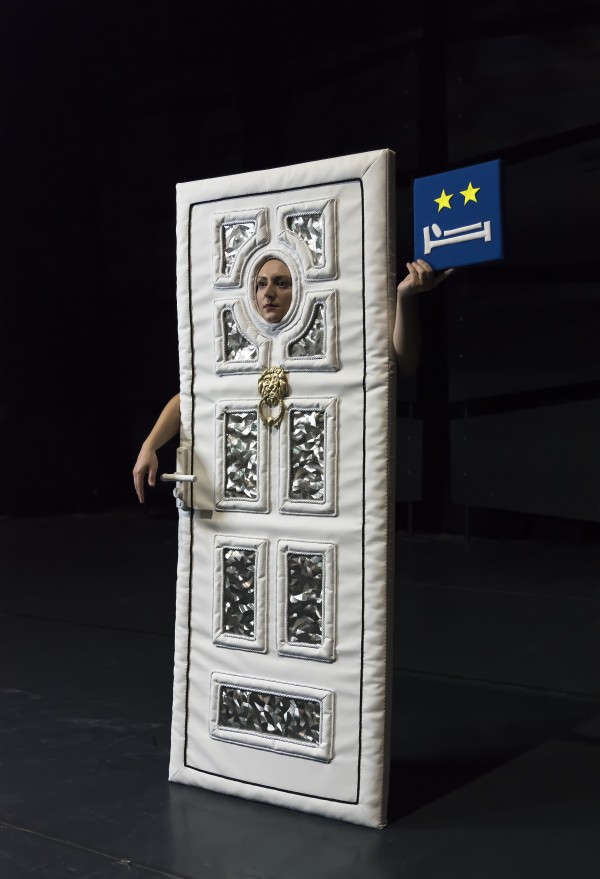 The involvement of artistic initiatives in the fight against the ravages of the tourist industry is rightfully called upon, for despite tourism mostly being seen as a problem relating to the unsustainability of air travel, crowd control, and the privatization of natural resources, it has been the cultural sector responsible for constructing an idea of place, paysage, and establishing the very concept of the tourist gaze. In that regard, one has to ask – how is the world of art, its practitioners and institutions, being held accountable for tourism? How are they delineating a new relationship to place?

Croatian artist Lana Stojićević’s works, for example, explore the transformation of the landscape in a region where urban development for tourism is spreading uncontrollably. Stojićević has researched the emerging faux-architectural tendencies in the context of illegal construction on the Dalmatian coast. In her parodic mise-en-scènes, she visually re-interprets the intrusive and almost picturesque aesthetics of unplanned constructions made for the Airbnb market. Artist Annalee Davis, conversely, deals with the relationship between plantations, labor, and tourism in Barbados, testifying in an interview with Collective Rewilding that:

“During COVID, the government of Barbados offered our coastline as a berthing station for cruise ships to have a ‘safe’ harbor when no other Caribbean islands would have them. Now we understand that their anchors weighing five tons with 300 meters of heavy anchor chains, swinging on the ocean bed, have caused rampant damage to thousands of square meters of our coral reefs as the chain drags back and forth in a 180-degree arc. This will take more than 100 years to rejuvenate. So while we have loyalty from cruise ship companies who want to and will play their trade when we reopen to tourism, we have lost some of our precious reefs. Fairtrade?”[5]

Across geographical contexts, local communities are seeing tourism as the equivalent to the single-crop plantation model or the monoculture, not only for their absolute dependency on it but also because of how it drastically depletes resources, limiting people’s capacity to sustain their lives within increasingly at-risk environments.

Besides bulldozing for resorts in the Caribbean or the monstrous cruise ships sailing the Mediterranean, the individual tourist is, too, the subject of this criticism. In the so-called democratization of travel, the tourist, regardless of class, has become a nuisance comparable to an unwanted rodent or flood. Small or large, tourists are seen today as nothing short of a destructive force. And that, of course, includes the art tourists. Facing this week the opening of the postponed Venice Biennale, the art industry and its publics are once again massively mobilizing to one of the cities most affected by tourism. 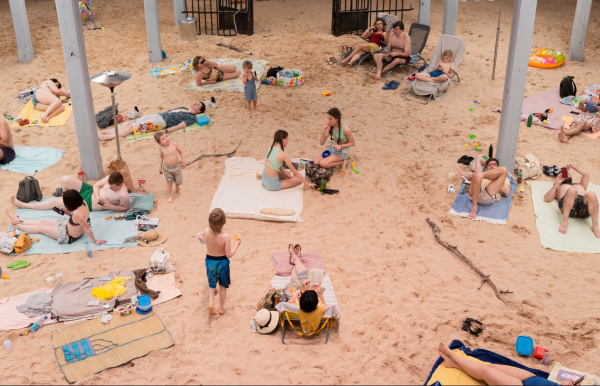 In 2019, hosted by one of the most emblematic institutions of cultural colonization, the Venice Biennale, the award-winning opera Sun and Sea offered a forceful confrontation of the tourist crisis. Among a wide array of ecological art, Sun and Sea addressed not only the overall impending environmental catastrophe that we face, but specifically the role that tourism plays in the destruction of both human and non-human ecosystems.[6] The participatory performance not only revealed issues with the archetype tourist – the sunbather enjoying the seaside – but disclosed more poignantly the tourist gaze. This is a mode of looking, which is reinforced by a sense of appropriation and consumption. Mary Louise Pratt called this Imperial Eyes to refer to the seeing-man – “he whose imperial eyes passively look out and possess.”[7] Integrating art tourists as both participants and witnesses, the opera engaged spectators to contemplate the make-believe tourist-spectator seeing the world through his/her imperial eyes. Witness to the show, and three times removed, art tourists enjoyed a well-subsumed criticism of the complicity of art in the continuous appropriation and consumption of place. In the spectacle of tourism, with the seemingly detached engagement and disembodied stare, the art tourist was once again able to perceive like in an image, the city, the peoples, and the landscape as interchangeable backdrops to their robust global art experience.[8]

However, outside the walls of the pavilion and outside the world of art, tourism dependency entangles the rising needs of communities to sustain and root their life in places evermore consumed by “hospitality.” That is why in Venice an array of grassroots organizations and artist-led associations like S.a.L.E Docks and Comitato No Grandi Navi [9] have been raising awareness about the detrimental social and environmental effects of mass tourism. [10] In fact, rather than mourning the absence of tourism in 2020, S.a.L.E Docks and Comitato No Grandi Navi together organized a city-wide protest to question the parameters of the tourism industry. During the lockdown, protesters used the banner “Venezia Fu-Turistica” (Fu-tourist Venice) to demand a reconsideration of the city’s future.[11] These protests, while not the first ones nor the last, did emerge at the height of the COVID-19 pandemic after Venice had become an epicenter of the health crisis. A critical situation that inspired many to refuse a return to normalcy. The protests then also asked a pertinent question: “We have to renegotiate its terms; how will we live together?”. The issues included in their demands for tourist reform entailed:

The requests make explicit that change is not simply about reducing the number of visitors, but about implementing a multisystemic and multi-species approach to the problems raised by the industry. Living together is, therefore, not living alone nor living without. Rather, it is about improving the overall conditions and agreements upon which a dignified and care-full living can be made possible.

While a lot of these demands are being made on the city of Venice, the port authorities, the cruise companies and the ministry of Culture and Tourism, we still, however, haven’t delineated the demands that ought to be placed on art institutions, the Biennale for one, and the galleries, foundations, and artist-run spaces, the summer schools, the curators, and the art critics who attend, participate, and gain from such mega art events around the world. In the face of this week’s impending return of the Venice Biennale, will the global art world join the struggle against tourism and the tourist gaze? Can we renegotiate the terms under which hosts and visitors engage towards a mutually beneficial, equitable, and reciprocal co-existence?

Mirela Baciak, curator at steirischer herbst festival, contributed to this discussion by advancing a reconsideration of hospitality as an alternative to the practices of mass tourism. Baciak has been researching conditions of hospitality in curatorial contexts in the past years. She proposes to counter conventional understandings of institutions’ relationship with art visitors:

“Hospitality is most commonly understood through its spatial dimension as a situation in which someone enters another person's space, which he or she defines as its own—most of us first experience hospitality within the realm of our own home. However, interactions that take place under hospitality may go beyond an individual's private life into spheres of social and political organization, such as institutions or even states. [...] In the context of art and its institutions, hospitality as a guiding curatorial principle has to comply with bureaucratic protocols and the economic relations defined by contracts and invitations (even when 'everyone is invited'). Since an art institution is not a home, but a place by definition open to the public where crossing the threshold between what is mine and yours is not the same as when a stranger enters one's private space. The sharing of physical space might be a prerequisite for the emergence of a mental space to practice hospitality as an ethical negotiation.”[12]

The topic of tourism is now at the center of many art conversations, especially as it pertains to the urgent need to subject cultural institutions to a radical transformation, making them accountable to their communities. This is especially important for the Biennale, which among fairs and other events, has for-decades been reinforcing a sense of utopian trans-nationalism that continuously diverts these artistic initiatives from any local (national) concerns. In fact, in the art world’s global aspirations, local communities, ecosystems, and places get quickly subsumed under the enmeshment of international power relations and structures.[13] That is why, asking how we can live together for the us - the art world - should entail reestablishing the rules of engagement. By interrogating forms of global appropriation and consumption that the cultural sector exerts towards the working class, towards local communities, and of course, the surrounding environment.