INTERVIEW: A BERLIN BASED COLLECTIVE 'LA 54'

Makeshift shelters as a grassroots response to the issue of homelessness.

Last December, the artist collective LA 54 embarked on an ambitious project funded by the local government to make a real change to the circumstances of homeless people around the Kottbusser Tor area. The collective worked in collaboration with a range of non-profit creative initiatives and the homeless community to build “Schlichthäuser” or “make-shift” homes along with a program of events and discussions, all based on the ethos of grassroot urban development. Sonja Teszler speaks with the artist and co-organizer Zwek about his experiences with the project and his motivation to bring forth drastic change in the public realm through art and direct action. 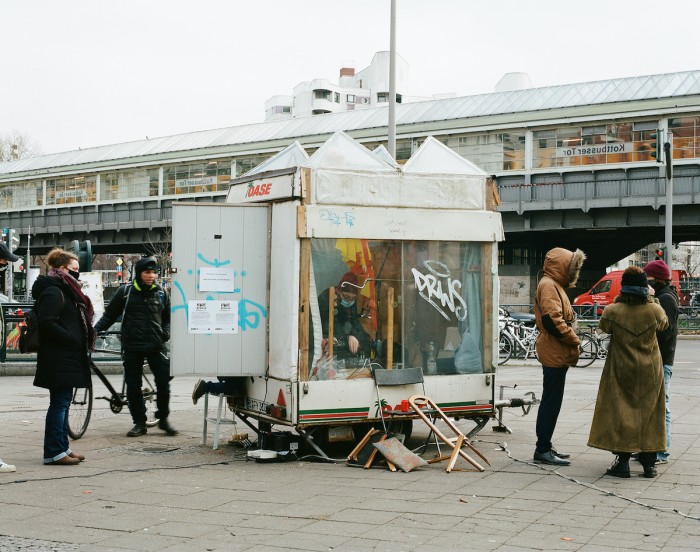 Sonja Teszler: LA 54 takes an opposite approach to urban development than capitalist speculation; you’re supporting immediate necessity through direct artistic engagement. Can you introduce your collective’s ethos in this sense?

Zwek: LA 54 tries to engage with people and situations on the streets where it happens directly. When we build houses or approach people, we can approach them in an everyday setting and on a non-hierarchical level because the street is the kind of place where you can meet every kind of person.

Our aim is to create new realities in the public urban realm, which foster communication and dialogue while being engaged in a physical manner in order to make living together easier and tackle peoples’ problems directly.

How did the project Die Schlichthäuser come about and has your personal practice as Zwek revolved around similar ideas before? Can you describe the houses themselves and how they’re built?

My installations always grow out of a socially engaged concept. The realisation and the materials I use are industrial, like wood, concrete and steel but often also involve some light and fragile component like cloth, cotton, foam, grass and sticks.

In this case we were using a bamboo structure that we wrapped in polyester fleece and filled with hay. The idea of the structure was that it should be easy to build without tools, warm, relatively light and insulated and not too harmful for the environment. The bamboo and the hay are compostable.

Can you tell me a bit about the Kottbusser Tor area and why you chose to focus on it?

The Kottbusser Tor is a very interesting environment - a melting point of different spheres. The drug scene, the dealers, the markets, the support culture, the police, different neighbours and all the passers-by.

Living in the middle of the drug scene felt important in terms of providing an informal space for people to openly talk to each other at a physical site that is also the locus of their struggles. 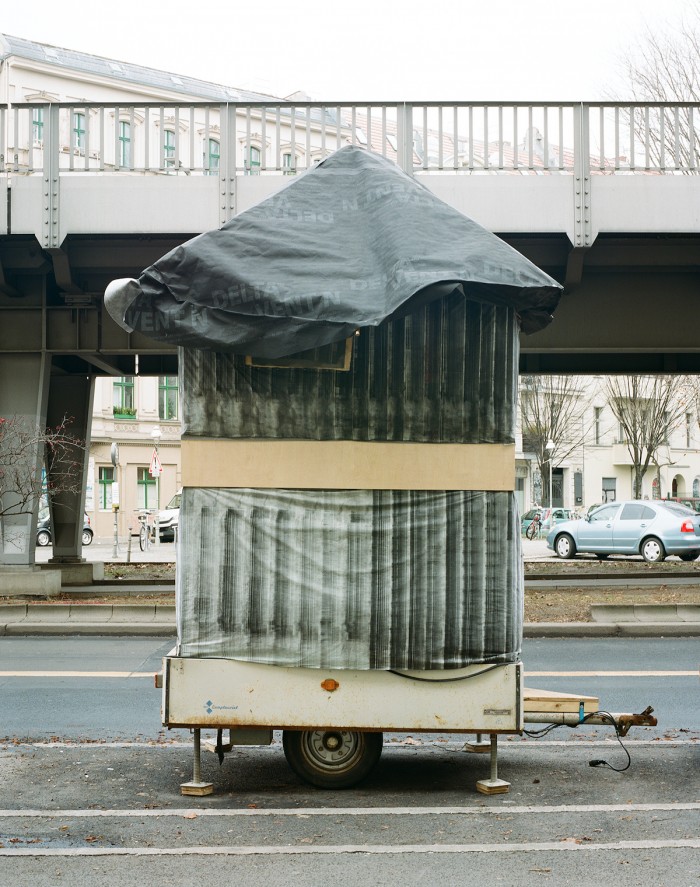 What has the response of homeless people been to your project and how do you approach them about participating? What were the public’s responses like?

The reactions were mostly positive. Approaching people directly on the street and where they lived was a good way of developing a shared understanding with as little boundaries as possible. Talks to the police and administrators were productive as well, since it is not hard to empathise with the difficulties of a homeless person’s life. Politicians were also supportive - we’ve been staying in contact with officials to continuously support the people we engage with and their houses the best we can.

Your program is based on non-hierarchical collaboration not just between artists and the homeless community but also different practitioners like Herbalists without Borders and Vagabundenkongress among others. Can you talk about the experience of working together?

I think such a project is not possible without a collaborative structure. People need to say what they want in their own terms and a place where they can always meet to express their responses. It's important to see physical change and be within a community of different people around you. It’s also crucial to witness the results directly without any boundaries separating people from the impacts of their actions or decisions.

"Communication is always the bottle opener."

In what way are you thinking about physical space and direct encounter in this project and has the pandemic influenced this?

The pandemic seems to make physical encounters harder, but whilst doing the project I didn't feel restricted in working with homeless people and with colleagues on the street, except for masks.

Of course, the reactions of the public are different with the pandemic, but “streaming” our process of creating artworks and performances was still possible both online and physically. There was even more engagement and appreciation because people are concerned about the situation.

What’s your impression of the main challenges to the public’s understanding of homeless peoples’ circumstances?

I think the main challenge is not to be scared. It may be like a phobia; the more you start pushing yourself to engage with their situation, the less difficult it gets to feel comfortable helping daily. Of course, you should always ask people what you can help them with, whether it’s just a phone call, water, food, tobacco, alcohol, address of a shelter or building a house for them. Communication is always the bottle opener.

What long-term outcomes are you hoping for and what’s next for LA 54 after January?

We are currently gathering the stories and the experiences to make a book, which will help us and the public to reflect. The project gave me the courage to engage with the situation I want to change through direct and immediate involvement. It is a very rewarding and energising process to work like this also in the long term. It is the best way to bring people together and generate positive, creative energy.