NOTES ON BREGENZ: THE BELL-AND-WHISTLE BOREDOM OF JORDAN WOLFSON'S CRUELTY

The dolls can’t feel anything, even if we might. But are we obliged?

There's a close family resemblance between milling around the Jordan Wolfson install across the four cavernous floors of Kunsthaus Bregenz and loitering racket-less on a squash court with a cleverly vindictive teenage boy. Entering either play space assumes the risks of shiners, donkey punches, taunts, and sprains; the pell-mell of missiles and epithets that is first injurious becomes a muleta (red cape) distraction, a prankish irritant and eventually something sweaty, reddened, and spent. Past the slickly maintained lightning rod persona and the dead-end, decade-long dialogue of his moral abnegations and his audience’s outrages, Wolfson’s work looks like a lot of bawdy gags with short sell-by dates. 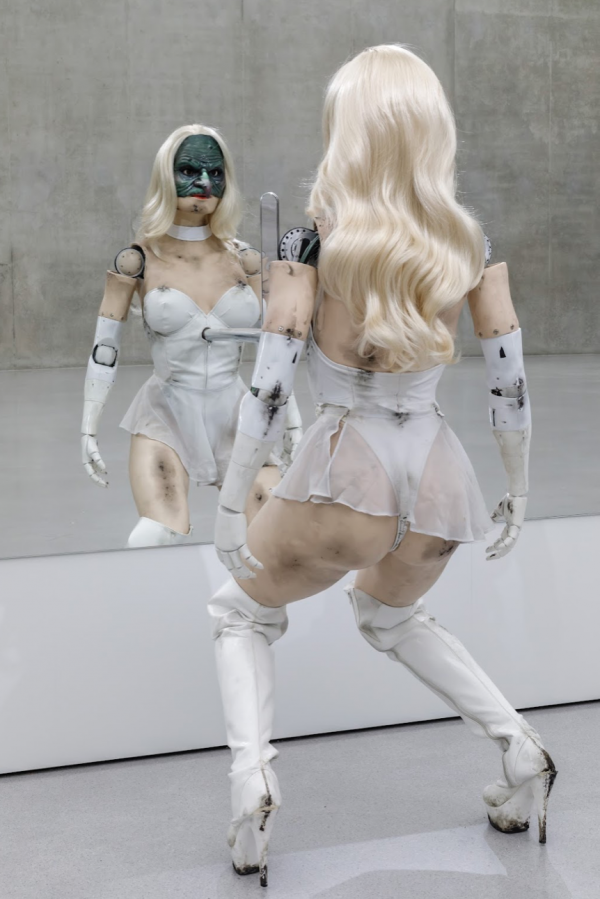 Wolfson became a rich man in the mid-2010s with a trio of increasingly perverse, technically novel works produced with the financial patronage and reputational brokerage of Sadie Coles and David Zwirner. The life-size robot (Female figure) (2014) dances to pop tracks in a sheer skirt, vinyl knee-highs and green ghoul mask, hunts its voyeurs’ eyes in a mirror, and frets in its maker’s voice about getting fat and ugly. Another humanoid animatronic, the ginger bumpkin Colored Sculpture (2016), is lashed by its crown and two joints to motor-run chains that slowly ragdoll the elastic polymer figure across the floor, like the lynching of a white boy with a Jim Crow-inflected name. Most inflammatory was the +18-rated, VR video Real Violence (2017), premiered at the 2017 Whitney Biennial, which shows Wolfson caving in the head of an anonymous man on a daytime city sidewalk, by turns with a baseball bat and his stomping foot, chanted on by the prayer sung during the lighting of the Hanukkah menorah. (Female figure) is on view at timed intervals, limited capacity, and with occasional malfunction on KUB’s top floor, Real Violence with staff assistance, an Oculus and a handrail at ground level; Colored Sculpture is not included in the show. 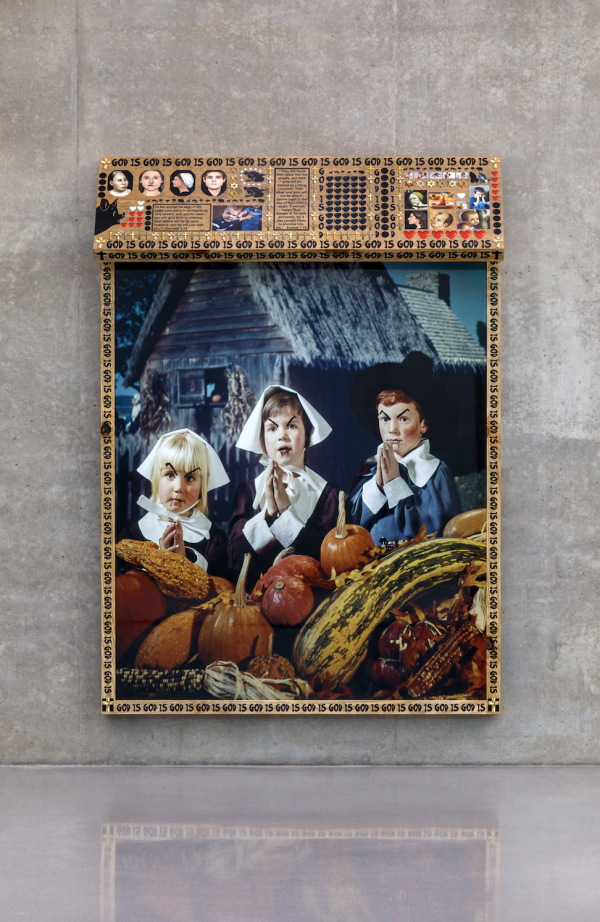 Even the less brazen works depend on the same mix of moral button-pushing and latest-gadget hype. Animation, masks (2011) sets off grainy stock-picture backgrounds against a sleek, Pixar-like CGI character culled from googling “Evil Jew”, who leafs through Vogue spreads while mouthing two voices’ raunchy pillow talk. The live action-animation mash-up Raspberry Poser (2012) depicts the boutique streets of lower Manhattan overcome in monster movie fashion by a condom spewing Nintendo-like hearts and bouncily exuberant HIVs, while Wolfson cosplays a studded leather skinhead who ambles around Paris and puts on blackface for a park bench chat. ARTISTS FRIENDS RACISTS (2020) employs twenty 3D holographic fans to montage inane cartoons (a Star of David unzipping to denude a farting heart; a rabbit petting a carrot and using its foot sole as a telephone receiver), sinister footage (tests of Boston Dynamics robots and parades of Zwarte Piet, Dutch folklore’s “Moorish” Santa-servant), and photo portraits intimating that Wolfson is no more racist than, say,  Yayoi Kusama or Jean-Michel Basquiat. 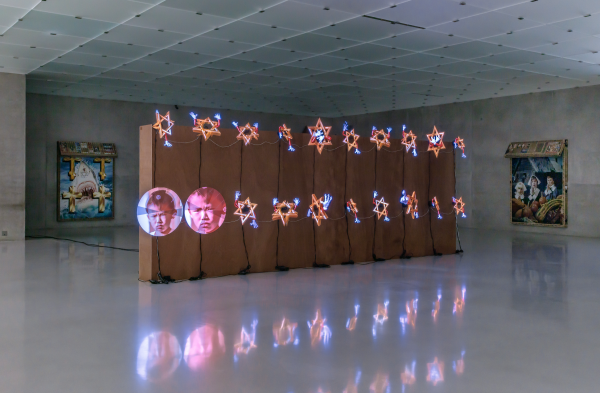 Sifting through a decade of Wolfson’s work at KUB sorts out the affective simplicity and the material stakes of his shock-and-awe approach. Provoking our prudish and priggish nerves is hard-coded into his sculptures and videos: they touch off columns headlined with charges of bigotry, misogyny, or a more generic cruelty, which he evades by vacating a public notion, sincere or spurious, that artists are inherited with a particular moral authority. Counter-indictments of our hypocrisy and pearl-clutching sensitivity follow perforce, while Zwirner, Coles, and (since April 2022) Larry Gagosian cash in their hype beast on the maxim that no press is bad press. But there are structural troubles to business that are so leveraged on getting a rise out of its clients. Unlike a certain carnival-barking-in-chief, Wolfson cannot endlessly push the boundaries of his brutality; he would really need to shoot somebody on Fifth Avenue to one-up the execution simulacrum of Real Violence. Moreover, both the year-on-year build-up of reputational plaque and repeated viewing of individual pieces anaesthetises against or denatures what is repulsive; the leftover concentrate is simply dull and ugly. There’s nothing convincing in the way the beaten doll twitches or the use of a feminine voice to tell us Wolfson’s got a big dick. Getting triggered depends on the audience’s willingness to be suckered, and while there’s unquestionably something fun in having one’s strings pulled – haven’t we all laughed at a substitute teacher getting hit with a spitball from the back of the classroom and tweaking? – the horrorcore gimmicks get old fast.