NOTES ON ISTANBUL: COMPOST AS AN ALIBI

Silent ways to regenerate art’s role on the soils of a repressive, yet hopeful megalocity, by example of its 17th Biennial, shows at Sanatorium and Protocinema, a.o.

In between the melodies of bağlamas, singing voices, kemenche, tabla and ceng, the sound of hands playing with water cushioned my ears into a daydream. Poured up and down beneath a microphone, drops immersed me into the voice of E.B. Kanıkey Güvenç Akçay and through a landscape beyond the garden of medicinal plants in Zeytinburnu, a neighborhood in Istanbul extending beyond the walls of Constantinople. Here is where the press conference of the 17th Istanbul Biennial is embedded in the inauguration of Mariah Lookman’s aquatic garden, Nelumbo, and not the other way around (1). Surrounded by water giving birth to lotus flowers, the organically attached pond embraces an international and local audience sitting quietly and attentive to the music composed as a healing method, following Ayurveda’s oldest texts. With eyes closed, the calling of good spirits pursues a therapeutic beginning for visitors to dive into a rather effervescent dynamic beyond this medicinal garden.

An agreeable calm reigned the scene. No trance was reached, and no soul left their bodies, but there was a collectivity invoked; a poetic reminder of how birds, seeds, humans and compost belong to the same cycle. It is how Ute Meta Bauer, Amar Kanwar, and David Teh, curators of this polyphonic show, connect to the etymological origins of their own commission, curare in latin, to ways of caring: for a place, for people, and for the role of the arts in between them. Cultural representatives from Istanbul hold onto spaces of relaxation and reflection to deal with the city’s demographic density and political opacity, turning historic hammams, former schools, metro passageways, and existing exhibition spaces into a very necessary space for criticality and differentiation, like this Biennial has been for the last decades. In a climate of global recession and conservatism, the announcement of the ongoing, full support of the biennial by the Vehbi Koç Foundation, felt like a relief for many that day.

Apart from the imminent structural contradictions surrounding the exhibition, social and political implications are circumvented by Bauer, Kanwar, and Teh, leaving nothing to spontaneity, but rather holding the tensions within and through poetic stimulation as a point of departure and notoriously long title, aka, a statement:

“Rather than being a great tree, laden with sweet, ripe fruit, this biennial seeks to learn from the birds’ flight, from the once teeming seas, from the earth’s slow chemistry of renewal and nourishment. There may be no great gathering, no orchestrated coming together in one time and place; instead it might be a dispersal, an invisible fermentation. Its threads will be drawn together, but they will multiply and diverge, at different paces, crossing here and there but with no noisy culmination, no final knot. Let this biennial be compost. It may begin before it is to begin and continue well after it is over.”

Reading this at the entrance of every venue felt like being confronted with a mantra invoking the spiritual powers art exhibitions mostly lack. In harmony with the pursuits of the documenta fifteen, of which Bauer and Kanwar are both advising members, this biennial deliberately ignores the idea of the individual as protagonist, letting the cacophony of collectivity determine the exhibition spaces, transgressing the symbolic value produced through the filter of the arts as the minimum encounter between strangers, carrying intersections between practices through suggestive “streams” of thought, as they call it: The Continuation of News by Other Means; Ways of Learning; Anarchiving; Elemental Politics—Geopoetics; Trans-sensory Aesthetics; Far Past—Unorthodox and Ancient Solutions. However, the projects are deliberately chosen beyond any of these promising theoretical frames, tying every collective specifically to their context of exhibition, using the remaining public space for restorative action.

This is never fulfilled in its entirety, but to hear the Inga people from Colombia, for example, who co-created the Indigenous University in the Andean Amazon as part of Vocal Cognitive Territory, Devenir Universidad (2022), a documentary co-produced with Ursula Biemann, was absolutely energizing. The suspension of Western art history categories proper resets our engagement with the works at Müze Ghazane on the Asian side of Istanbul and concentrates on the urgency of repurposing our gaze as an ongoing process (2). The dialogues between leading figures of the Inga community are eloquent and trenchant. And for me, especially familiar and soothing, as I immediately think of the brutal loss they address in the cultural upbringing in Latin American schools, suppressed by epistemic damages caused through the neutralization of colonial educational regimes, as in mine. In the next room, the Silent University operates in favor of an alternative, transversal pedagogy (3). As inspiring is Ahmet Ögut’s initiation of this programme, started with a socially heterogeneous community in Hamburg, distanced from a self-centered art practice, deepening discussions on today’s global humanitarian crisis as daily routines, intentionally succeeding in offering viable solutions to the structural discriminations he has been addressing for years through installations, sculptures, and on-site interventions.

INLAND / Campo Adentro shows itself as less interested in discourse than in new forms of rural engagement through intellectual exchange and unusual forms of cooperation (4). It is as if life becomes art, which is rather irritating for the majority of people, professionals or not. Yet nothing gets lots in this transformation: Fernando García-Dory’s research on the land management systems, pastoralism, and cheese-making of both Boğatepe, a village in the Kars region of Eastern Anatolia, and Istanbul bring us closer to traditions and economies that consciously test and nurture the rhizomatic constellations possible through works of art. In this case, the tangible connection is made through beautiful, unperfect masks of the goats sacrificed in colorful rituals reflected on by the collective. Similar interspecies visions also appear in Cooking Sections’ yellow bistro at Büyükdere35, full of mirrors mimicking the wetlands in which buffalos live and from where they produce kayak (yogurt) and sütlaç (rice pudding). All that with honey was insanely delicious. The multiple ecologies and architectures disappearing around the city are celebrated here, and in conjunction with the farmer-organized Water Buffalo Festival, which coincides with the dates of the biennial(5). 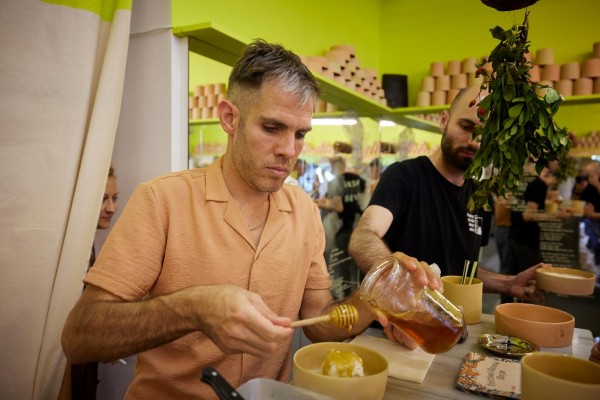 Environmentalism is meanwhile distilled in educational models given by Ângela Ferreira and her Zip Zap Circus School, bridging unrealised architectural projects and community oriented design (6), and the Disobedience Archive, curated by Marco Scotini and spatially conceived with Can Altay. Untraditional in its composition, Scotini’s arrangement of videos simultaneously shown on modified chalkboards and screens on tables in the former Greek school for girls in Taksim collect and analyze the very essence of the disruptive potential through films from Godard to Chto Delat (7). It’s a long list of cinematographers, activists, and artists. Through them, Scotini brings our awareness to disobedience as an affirmation of individual and collective choices, a common ground that seems to vanish in the homogeneity of effectivity and exploitation in the post-pandemic era we are living in.

The invitation of the biennial to listen with their whole bodies to the city as a landscape is therefore a call for awareness that remains accessible to everyone, without any monetary cost to visit. That is already a potentiality in the impenetrable layers of this shore of the Marmara Sea, where people are swallowed by distances, traffic jams, and the proximity between traditional and contemporary forms of living. Tarek Atoui takes specific hums, drops, melodies, and noises of the harbor and creates through objects and vessels a Whispering Playground, turning the Küçük Mustafa Pasa Hammam into a trans-sensory field where sounds appear as sculptures (8). Wherever you look, the layers of complexity of a city that doesn’t allow free speech, obliging its citizens to paranoia, turn to non-verbal convulsions and chances of beauty. The body listens; comprehends the notions that remain unspoken. 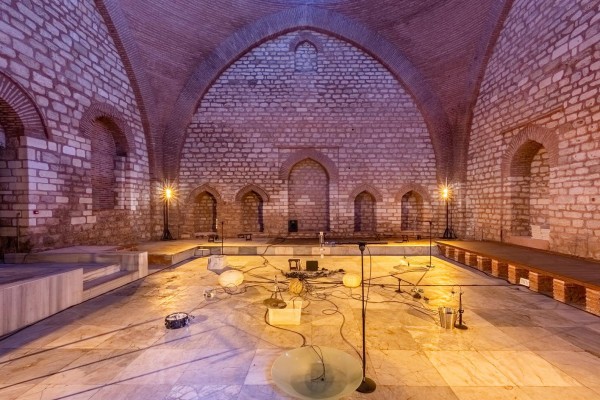 Concertino for the Sea, an environmental installation by Renato Leotta, starts from the architectural relationality that the freshly restored Çinili Hamam offers, creating underwater imageries my mind projects on the blue marble across the room (9). The multi-channel aquatic ballad for the Posidonia oceanica, an endemic plant throughout the Mediterranean, reconfigures the symbolic value that this place offers. In collaboration with musician Federico Bisozzi and architect Giuseppe Ricupero, the music seems to be alive in the different stations of a washing ritual resurrecting in Turkey both as a local treat and touristic attraction.

The music of Leotta resonates on the other side of the walls, where Taloi Havini has installed twenty speakers that play a sound piece; a call and response with ancient techniques through her own Hakö language and instruments, conjuring a cyclical understanding of life and death (10). Havini’s movement beyond proximity and distance for sonic measurements resonated the next day within my body. Being rubbed by a mother, I could only show my gratitude for the communal bath I was experiencing with a smile, and Hot Stones, a poem by Asuman Susam (11):

I read the forest at my leisure

Look at the trunks seeing the roots

The trees in their linear adventure

In the meadows of this country I feel good

I stand as a healer at the edge of your mouth

That single breath you call a jade horse

Shoots by shaking the plain

They think it’s a dream, pulse of the earth

A breathless horse drenched in sweat

Poetry seems to be the weapon of choice channeling contradictions, imagination and the nature of the encounters here described. Onur Karaoğlu takes the name from Aşık Mahzuni Şerif’s song, Boşu Boşuna (In Vain), extending an invitation to performatively engage with the role of the poet as chronist of catastrophes. Protocinema – a project initiated by Mari Spirito, currently residing at the hyper-gentrified neighborhood of Polat Piyalepaşa Çarşı – hosted Karaoğlu on a narrative process encouraging the active participation of visitors by turning them into ghost writers for the sea, which laments the ramifications of the climate crisis, covering it in marine mucilage, catastrophically devastating the Marmara’s ecology through its uncontrollable abundance in 2021. (12) 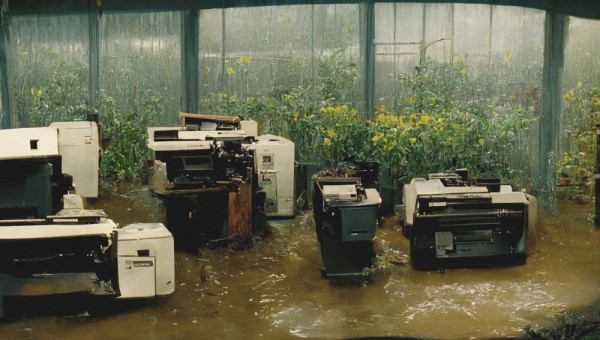 The mucilage and the dry leaves of Posidonia oceanica spread by Leotta in the Çinili Hammam catapulted me to Adnan Yerebakan’s Sanatorium at the fishers’ harbor in Karaköy and the installation Office by Kerem Ozan Bayraktar in the headquarters of the art gallery. Part of the exhibition A bit of Unruly Complexity, curated by Misal Adnan Yıldız and shaped in conversation with the participating artists – Bayraktar, Akhmat Biikanov, Evgeny Dedov, Mehmet Dere, Şafak Şule Kemancı, Çağla Köseoğulları, Kateryna Lysovenko, Yağız Özgen, Sam Samiee, Sergen Şehitoğlu, Osman Sadi Temizel, Viron Erol Vert, Agnes Waruguru, and Slavs and Tatars – Bayraktar bridges street and domestic(ated) tropical plants, mostly succulents, to obsolete copy machines in a beautiful, breathing installation that excels among the beautiful articulations within Yıldız’s curatorial frame (13). Office is the only thing I could identify as metaphorical “compost”  within the biennial. Bayraktar’s piece considers dump in different levels: offices as generic spaces; copying machines resembling a decaying capitalism; and AI-generated images of plants and photocopies as chronicles of the current reproduction stage. Complexity is thus treated as a social phenomenon related to cybernetics, systems theory, and art history; as copy tracing constellations in need of critical revision. Similarities between biological replication and self-replication of cultural spaces as forms inhabit the intention of the biennial, which seems rather spread, cautious, expectant. With watercolors of contemplative gazes and kindred souls in dreamscapes that derive from his hometown in North Caucasus, Akhmat Biikanov gives back through a poem, a mirror to what the curatorial compass of this biennial aims to spread, but rather hoards, evoking on our passing over the Bosphorus at the beginning of this fall:

“I encounter the notion of complexity every time I’m

Trying to make a decision, 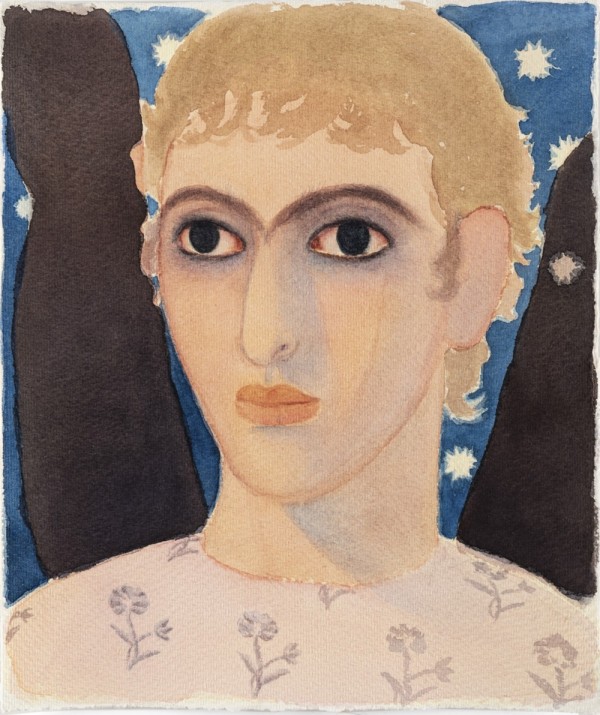