On Top of the Art World.

Each year, the venue of the Paris Internationale art fair comes as a surprise. The nomadic show makes use of various sites throughout the city. This year, 35 Boulevard des Capucines served as its home. As every year, I am, again, astounded by its architectural spirit. The nostalgic façade of the venue once hosted the first Impressionist exhibition in 1874 and served as the studio of the French photographer Nadar. It blends in with the appearance of its surrounding neighbourhood, dotted with posh monuments and some of the architectural jewels of Paris. But its raw interior is nothing that reminds me of an art fair. And I adore that. In terms of size, this year’s Paris Internationale is petite compared to its contemporaries such as Art Basel, Frieze, or Art Cologne; it is possible to consume its content in just one day without reaching a breakdown or exhaustion. In that sense, Paris Internationale is an art fair in reverse. It’s noteworthy for its absence of any booths, barriers, or entrance fees, and there is no separation between normal and VIP visitors.

Christ & Gantenbein, the Swiss architectural studio responsible for the venue’s design, provides something unexpected in the center of Paris – the duo reinterpreted its Haussmannian principles by forming a radical system of lights and temporary walls. When entering the building, I heard people talking about a performance. So, I made my way upstairs to the Berlin-based gallery BQ, which showed a solo, 10-minute sound-slash-aesthetic performance called Another effort to blow it (2022) by Mara Wohnhaas. In front of  a crowd of people, Wohnhaas sits on a freischwinger chair and reads a poem while battling a disruptive soundscape caused by four leaf blowers directed at her. The poem, written as a single line on a roll of paper, was shredded by a paper shredder as Wohnhaas read it out loud. The interplay between mechanical noise and an unheard poem created a theatrical battlefield. Another effort to blow it was made to disappear – clearly not “sustainable” for its presentation at an art fair. Then again, the physical presence of Wohnhaas is so bold exactly because she uses the space of an art fair to contrast herself with the static permanence of paintings or sculptures that are presented therein. Unlike other artworks which are sold and then easily replaced, Wohnhaas’s performance highlights the transitory market logic. 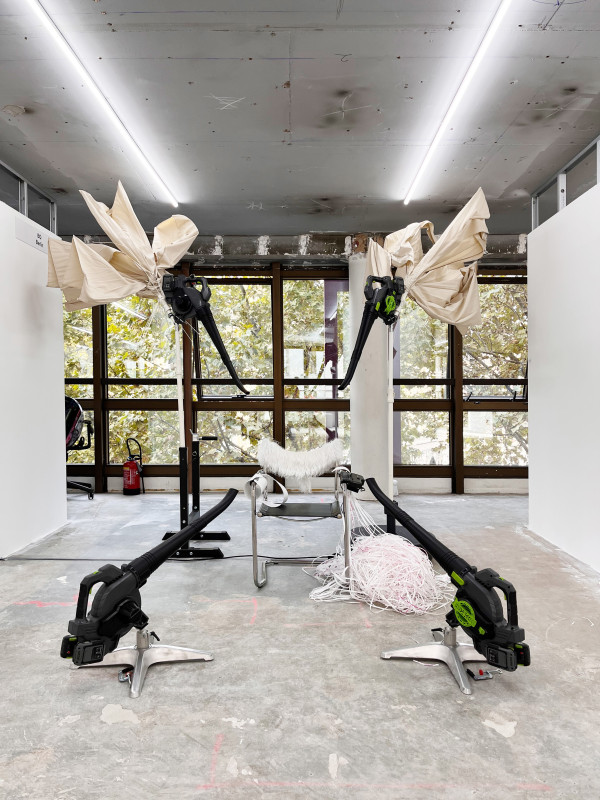 Mara Wohnhaas, Another Effort to Blow it (2022), Courtesy of BQ

Wandering around the different galleries and artworks in Paris Internationale, my gaze is fixed to the paintings and sculptures by Gizela Mickiewicz and Tomasz Kręcicki shown at the Polish gallery Stereo, which focus on the paradoxical presentation of absent bodies. In his oil painting Candle, 2022, Kręcicki shows a close-up of a fingertip and a candle. The aesthetic choices made in Kręcicki’s work adopts cinematic solutions in the lighting of its frame, as it is uncannily realistic with its visual coolness that has a mysterious touch. The painting itself is not an accurate depiction of a visual reality; its soft colors, rainy gray against creamy white combined with a mixture of beige and rose, clash with its other hints of orange and black. I struggle so much to contextualize the painting within art history. It is not abstract; neither realistic nor figurative – all of these terms bounce off of it, and are exactly why I am fascinated with it. The enlarged fingertips at the center of Kręcicki’s painting are reminiscent of Michelangelo’s fresco The Creation of Adam (1508-1512), where God imparts the spark of life from his own fingertip onto that of Adam. Following that nod to both the Western artistic canon and the Biblical creation myth, fingers enjoy a special symbolic position – they literally light up life. With that in mind, Candle, 2022 leaves us wondering: is this the artist’s hand, transferring spirit onto a material surface? Is his aim to offer us an alternative symbolic reading of the finger in art history, or is the hand nothing more than a body part with which action is executed?

I leave the painted fingertips behind to recognize that the second artist Stereo exhibits, Gizela Mickiewicz, who also presents sculptures with body parts. Mickiewicz’s sculpture Equating Experiences (2022) shows a chair without a proper seat, stacked with a number of dental imprints positioned on top of one other in different sizes. They are the traces of people who have been sitting down. It is a seat reserved to those from the past, artifacts of bodies. Equating Experiences is a gentle reminder of the traces our bodies leave behind once they have either disappeared from space or departed from an object; a humanity transformed into an anonymous monument of the human body. 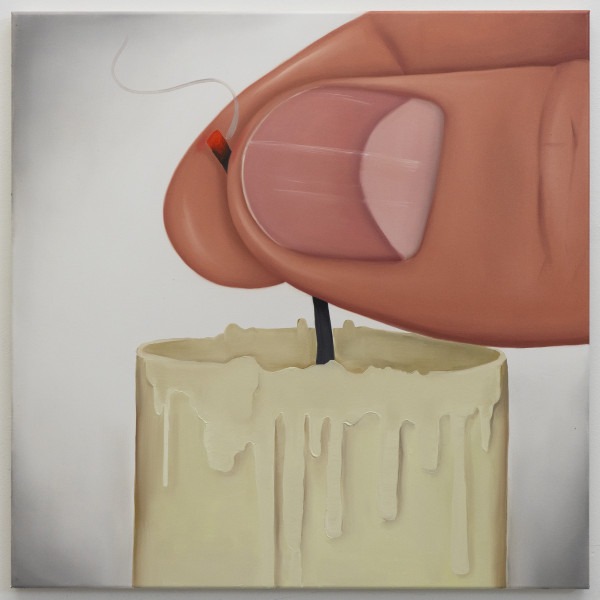 The body’s various forms – its absence, presence and depiction – was also the subject of Let's chase the dragon (2022), painted by Swiss artist Romane de Watteville. Exhibited at the Ciaccia Levi gallery, Let's chase the dragon showcases a faceless body wearing high heels, a long sleeved shirt cinched at the waist like a corset, and a black skirt. The scenery is intimate. Here, as in other works by Watteville, the cell phone camera is deployed as her most important tool to catch moments, which are then translated into paintings. Traditionally, the subject matter for still life paintings are inanimate, with a focus on household objects, flowers, or fruits. Watteville’s paintings extend the still life beyond the traditional, depicting worlds in which the interior or surrounding of the models is as important as the subjects themselves. The mashed-up imagery, the pastel colours, the playful approach and the flat pattern feel like a visual homecoming. I can certainly identify with the images, their colors, and even the people and moments captured in them. It feels like a life has fallen out of a photo and onto a canvas.

Despite my fun, I had to remind myself that Paris Internationale is not the only artistic playground in town; in January 2022, the art scene was disrupted and shocked. Rumours that Art Basel effectively stole both the venue and time-slot of the French fair Foire Internationale d’Art Contemporain (FIAC) have turned out to be true. Art Basel has proven its ability to increase sales and attracted enormous crowds. It outperformed FIAC not only in economic terms, but also in terms of social and cultural reputation. Unlike the egalitarian and open spirit of Paris Internationale, Art Basel’s Paris event, Paris+ par Art Basel, is only accessible with the purchase of an expensive ticket: something I and many others struggle with. That’s why an elaborate system of handing over precious tickets from one person to the other was common practice in the art world until now. But this has all been changed. After someone handed me their ticket to enter Art Basel, two members of staff politely asked me to approach the cashier’s desk, exclaiming that I was not allowed to enter. After telling me that I can only enter the fair with the original holder of the ticket, the cashier continued to tear the ticket apart in front of my eyes – a gesture demonstrating power and exclusion. It was the last day of Paris+ par Art Basel, and surprisingly, all of the tickets were sold out. I head out in a walk of shame. Art fairs, even more than museums or galleries, reproduce and operate as a driving force for class-biased accessibility to art. The elite will always find their way in, while others, like myself, stay excluded. And while Paris is still associated with extreme commercialization – the takeover of FIAC by Art Basel, the recent opening of the Bourse de Commerce museum by billionaire François Pinault, and the opening of the Fondation Louis Vuitton some time ago – Paris Internationale has, in my opinion, changed the flair of Parisian contemporary art for the better.