To whom does the World Cup belong?

When FIFA announced Russia and Qatar as the host nations of the 2018 and 2022 World Cup final tournaments, after a secret ballot of their 22 executive members in December 2010, I had a decision to make. The World Cup is my favorite thing on Earth, and I get one every four years: could I boycott two consecutive editions? The Putin regime was a kleptocratic nightmare; Qatar was more theocratic and even less democratic, a US client state where it would be too hot to even play football in summer. Even considering how much my love of football had led me to tolerate, however grudgingly – from the English Premier League’s role in saving Rupert Murdoch’s media empire to the ubiquitous sponsorship by energy or gambling companies – these Cups were a step too far. I couldn’t, in good faith, enjoy them. Could I?

In the interim, much changed. Within six months, to the surprise of absolutely no-one, a huge corruption scandal broke around FIFA. President Sepp Blatter, who had dismissed the illegality of homosexuality in Qatar by joking that gay fans “should refrain from any sexual activities”, was banned from football for 12 years after an investigation into bribery and money laundering, with allegations made (and retracted) that Qatar paid £1.5m to African officials for their votes. Many FIFA executives present in 2010 have subsequently been banned from football, for years if not for life, turned whistleblower in exchange for impunity, been cleared of criminal activity for lack of evidence, or died under a cloud. Despite this, the hosting rights were never seriously reconsidered, and David Beckham, the ambassador for England’s failed bid who said he was “disgusted” by the process, is now an ambassador for Qatar.

I decided I would watch in 2018 but not in 2022, for three reasons. Firstly, Russia has a footballing tradition: it was part of the Soviet Union side that won the first European Championship in 1960 and reached the semi-final of the 1966 World Cup. Secondly, it’s physically possible to play in Russia in summer, unlike Qatar. Thirdly, for all the “evils” of Putin’s regime, there had not been thousands of migrant workers killed in building the stadia for it, as there already had in Qatar by the time Russia 2018 kicked off in Moscow. I didn’t go with Three Lions Pride – the LGBT+ supporters’ group with whom I often visit Wembley to watch England – and had to follow their battles to fly the rainbow flag at matches, defying Putin’s law against “propaganda”, introduced in 2013, from elsewhere.

That “elsewhere” was Kyiv, where I was doing a residency: the city, which had just hosted the Champions League Final, was boycotting the tournament due to the annexation of Crimea and invasion of Donetsk and Luhansk in 2014. I watched the opening game, between Russia and Saudi Arabia, in a tiny bar with three Dutch tourists, two indifferent Ukrainian bartenders and one Russian who kept quiet every time his team scored and the TV cameras cut to Vladimir Putin bantering with Mohammed bin Salman. I saw the rest online at home, or in an Irish pub that remained almost empty for every match apart from the final – and felt sure I wouldn’t watch so guiltily again in four years’ time.

Inevitably, pathetically, I’ve revised my position since then. My opposition to the tournament being played in November and December, cutting into the regular season, has been curbed by football’s response to the pandemic, with the suspended 2019-20 campaign resuming over the summer and Euro 2020 being played a year late. That championship was hosted across Europe, with Viktor Orbán’s Hungary as one of the venues – there was cause for alarm about Orbán’s move towards the far-right when Budapest was chosen in September 2014, and little doubt about it by June 2021, when four matches were played there. Bewildered commentators were unsure whether to express concerns about the black-shirted, jack-booted Hungary fans who booed Black players and the LGBT+ flag, or praise the Ultras’ commitment to their country. This was a depressing sign of how poor the modern football world is at thinking about politics, with participants having been disincentivised from speaking out about its corporate capture or complicity with undemocratic regimes: think of the pressure put on Newcastle United striker Papiss Demba Cissé to end his refusal to wear a shirt sponsored by payday loan company Wonga, or Mesut Özil being frozen out of Arsenal after his Instagram post highlighting the persecution of Uighur Muslims in China. (Arsenal were quick to reassure the Chinese market that they did not support Özil’s comments and have “always adhered to the principle of not involving itself in politics”. Indeed, Arsenal had little to say about Özil’s friendship with Turkish President Recep Tayyip Erdoğan, despite plenty of criticism about it from elsewhere.)

At The World Transformed – a left-wing festival held in Liverpool – in September, I co-hosted a workshop about football and politics. Qatar was a hot topic: we concluded that us individually boycotting it would make no difference. Nobody would even notice: Eric Cantona’s declaration that he would not be watching might leave an impression, but ours wouldn’t. What was needed was action at higher levels, but given what had already emerged about the bidding process and the number of workers killed in Qatar since 2010 – estimated by the Guardian as at least 6,500 – we had no hope.

In October, local authorities in Paris, Marseille, Bordeaux, Lille, Strasbourg and other French cities announced they would not set up local ‘fan zones’ in protest at Qatar’s human rights and environmental records, despite Tamim bin Hamad-al-Thani, Emir of Qatar, buying Paris Saint-Germain in 2011 and bankrolling their domination of French football. This gesture was not without sacrifice: the cities would lose money that would come from sponsorship of these fan zones, and would be spent on food and drink within them. But it rings rather hollow given how many migrants have died trying to enter Fortress Europe: the Mayor of Strasbourg saying “[we] cannot turn a blind eye when human rights are being flouted” because the city is “the seat of the European Court of Human Rights” was particularly hypocritical. Besides, it hit the supporters more than anyone else: they would likely conclude, like my comrades and I at The World Transformed, that they should not have to miss something they loved because of FIFA’s greed and corruption, and would likely watch elsewhere.

Campaigners pushing for a boycott in Norway – who did not qualify for the World Cup – and Germany and Denmark succeeded only in getting Denmark’s kit manufacturers, Hummel, to release a third-choice strip in ‘the colour of mourning’, after the Danish football federation promised to wear clothing with ‘critical messages’ in Qatar. FIFA’s rules prevent overt political messages: what is ‘political’ is often contested, but the all-black kit meets their regulations. Whether it will be worn at the World Cup remains to be seen, but the gesture is making money for Hummel already. Depressingly, it’s the most powerful statement that has yet been made.

It's easy to feel defeatist, and that it was ever thus. The second FIFA World Cup was awarded to Italy in October 1932, and two years later, the hosts won a tournament that Mussolini turned into a celebration of fascism. Argentina was awarded the 1978 edition in 1966: there was a far-right military coup in 1976, and Amnesty International criticised the National Reorganisation Process in which thousands of dissidents disappeared. Prisoners could apparently hear the roar from River Plate’s Estadio Monumental, only a mile away, when it hosted the final. Argentina won 3-1 against the Netherlands, who had considered a boycott but decided to attend, without their star player, Johan Cruyff – who had not travelled for personal rather than political reasons. After that, the tournament was not awarded to a dictatorship, until December 2010.

But it wasn’t always like this: 31 African countries boycotted the 1966 edition, mainly because Africa wasn’t given an automatic qualification slot but also because FIFA had recently allowed South Africa to rejoin. North Korea refused to play in Israel for a 1970 World Cup qualifying round match and were expelled. More famously, the Soviet Union did not travel to Chile for the second leg of their qualification play-off at the Estadio Nacional in November 1973. Since their 0-0 draw in Moscow in September, held two weeks after the coup that deposed Salvador Allende, the Pinchot regime had used the stadium to torture and kill supporters of its left-wing predecessors, Popular Unity. Obliged to fulfill the fixture in order to qualify, Chile kicked off in front of a small crowd and passed the ball into the empty net, whereupon the referee called time on the farce and announced the hosts as the victors. 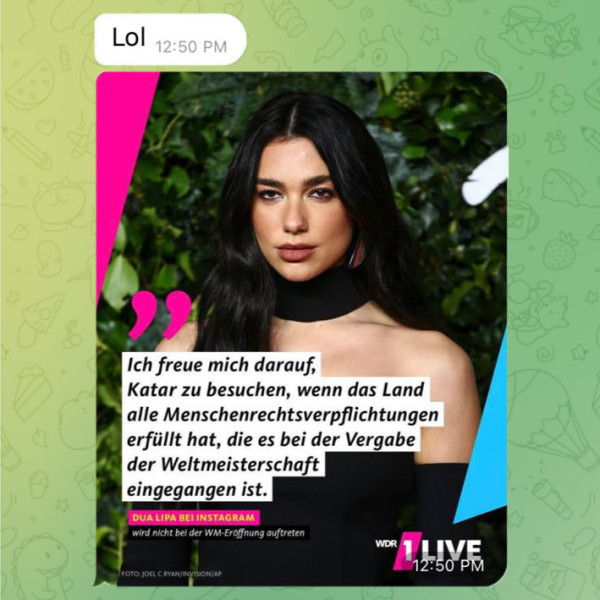 Now, none of football’s great nations hold ideological opposition to capitalism – since the fall of the Soviet bloc in 1991, the world’s remaining Communist countries have managed just two appearances, with China going out in the first round in 2002 and North Korea in 2010. It’s no surprise that opposition to Qatar 2022 has been so ineffectual, given the difficulty of holding the people involved to account and the huge financial and political costs that would come with countries pulling out. I’m not giving them a penny – I won’t attend the fan zones in London or buy any merchandise, let alone go to Qatar – and if I do watch any of it, I’ll try to stream it so I don’t give the tournament the tacit endorsement of adding the official viewing figures. That doesn’t feel like much, but like everyone else, from the players to the Presidents, I’m part of a captive market, and given the present-day implausibility of a workers, state-funded alternative like the USSR-backed Spartakiad Games of the inter-war period, that’s unlikely to change – at least, not without an internationally coordinated effort to pressure FIFA and other governing bodies.