Otherwise Caring From the Underground

What is caring when notions of acceptability are suspended, and what kind of politics emerge from such a displacement? Uncanny propositions from the underground of Bucharest, Romania

One day in fall 2003, Radu asked me if I was interested in seeing his place.  We were standing in front of an open manhole, with a provisional iron ladder descending into the darkness below. Grozăvești metro station lay a few meters away, in a gloomy Bucharest,  strewn with poorly-maintained infrastructure, broken pipes, frozen sidewalks, and a myriad of billboards proclaiming the advantages of belonging to the ‘common family’ of the EU. Glimpsing the dark end of the ladder, I was both terrified and intrigued. I had known Radu for a few months, seeing and chatting with him every day on my way to and from University. Despite being just a few years apart in age, we did not have much in common: he was one of the many copii străzi (street kids), I was an Erasmus student; he was pumping a synthetic colorant (Aurolac) from a plastic bag, and I wasn’t even smoking; his past was marked by a history of violence and institutionalisation, while I was a working-class kid who had never experienced such life conditions. Yet we chatted every day, ate merdenele cu brânză sărată together, and grew to trust each other. So I accepted his invitation. 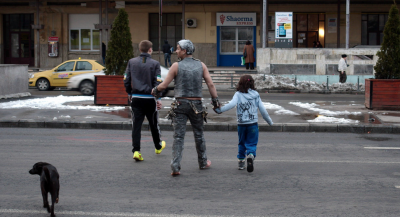 He moved down first and I tentatively followed, finding myself at the bottom of the ladder, staring into the darkness, without a clue what was going to happen. My senses were overwhelmed by the pitch-black hole , the humidity, the heat,  the reek of piss and melted garbage.  Glasses were fogged, my face was misted, my whole body was shaking. Some moments of suspension – in-between life, above ground and below - in-between homing and uninhabitability. Then light came in the form of a candle held by a young boy. Things were still mushy, but they gradually began to acquire clarity. The contours of a huge pipe running along one of the walls emerged from the dark. On the ground – rubbish, mattresses, covers – food leftovers, stagnating water – a cap, a jumper. Right in the middle of this scene – Radu and his younger friend looking at me – their eyes in suspension – waiting, perhaps, for a comment, an articulation of some sort. This was not what I was expecting, yet there it was – the place he called home. 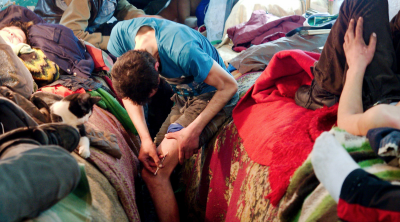 Bucharest changed considerably in the 15 years following this encounter. The colonising discourse that depicts eastern Europe as the Other of ‘real’ western Europe was boosted by the so-called ‘transition’ of former socialist countries to capitalism. From the early ‘90s, the cultural doxa was that the country must be ‘modernized’, rejecting everything associated with its recent past. The ruling classes, with the EU and other international bodies, translated this into the massive privatization and then financialisation of housing, industry and public space. The consequences have been felt and lived by the many. For homeless people and drug users like Radu, but also for sex workers, the elderly poor, the racialized others and many more, the last 30 years have intensified a long history of exploitation, racialization, and neglect. 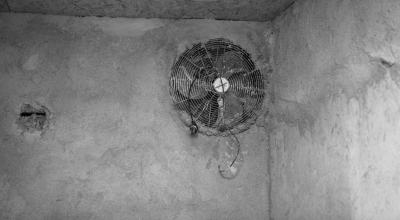 In-between the cracks of these historical makings, communities of bucureștean have continued to live in underground tunnels - crisscrossed by pipes running hot waters (part of the city’s massive tele-heating system), in abandoned shopping malls, in blocks marked for demolition by the previous regime, in patchworked shacks located on public pavements or alongside railway lines, and within similar other forms of supposed uninhabitability. Yet, there is more to these lives and stories than what the sociology of resilience, capability and humanitarianism might suggest. It is not that the bodies here ‘fell through the cracks of history’ and are now waiting for a Godot-like something to happen; nor are they in need of celebrations for their endurance. Such a colonising discourse does not capture the reverberations emerging from the cracks. Instead it silences them via re-appropriating their uncanny propositions within its normalisation of governmentalities. 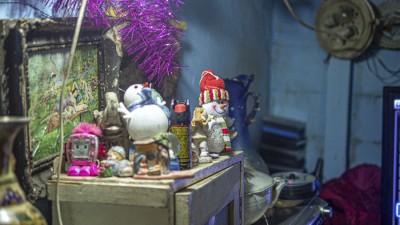 In 2014 I saw Radu again, this time in a different tunnel, under the main train station of Bucharest. Our encounter was possible thanks to a photograph I took of him in 2003: a friend recognised Radu, and brought me to the Gara de Nord tunnel. When I met him, Radu didn’t remember me, but recognised himself in the old picture. He was surprised, and I was too: Radu had been living underground for more than 11 years, in warm tunnels filled with syringes running through the belly of the city. In there, he feels, as he and the community put it, acasa (at home).

Day after day, he and other members of the community showed me around their home. The tunnels became known to me as a fluid assemblage of pipes and veins, an interlace forming a living infrastructure making life possible underground. In a vitalist sense, this infrastructure can be seen as that shared plane where the economy of ‘being at home’ was gathered in injecting heroine and mephedrone, but also in constructing collective assemblages of care by sharing food; by shouting at each other; by watching TV; by exchanging water, doses, and money; by climbing above ground to reconnect the tunnels’ electricity cable to the public lamp; by buying petrol for the electric generator; by scavenging copper wires and other scrap materials from the city’s trash bins, bringing it down, arranging it according to its value and use, and bringing it out again for sale to recyclers; and by many other everyday matters, all taking place within and with a tunnel that was planned for energy efficiency and collective consumption by the Republica Socialistă România decades ago. 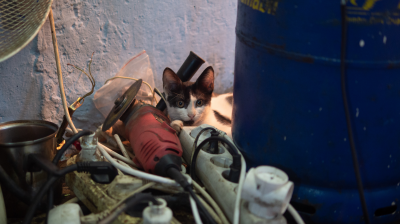 The economy of care that all these arrangements brought to the fore made life in the underground possible, allowing inhabitants (as they put it) to become autonom din afară (independent from the outside), to create a ‘home’ that offered an alternative to the supposed ‘solutions’ provided by the city (homeless shelters, rehabs, jails). Crucially, however, the economy of care in the underground does not leave evident traces: it is labile, ephemeral, largely hidden from sight, and when its traces are brought to light, they tend to be subsumed and categorised as deviant, pathological, in need of reparation. To see and to feel that form of caring otherwise, one needs to displace what is known of ‘care’. But that might not suffice. Even if one is ready to suspend judgement on what is of care and what care does, accessing care from below is not easy. The traces of ‘caring otherwise’ are not evident. It is hard to see them, to let them emerge, to hear them speak. 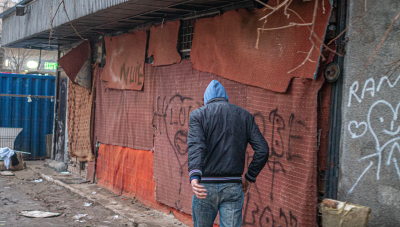 Even more so when their extended collective life, attached and sustained by the entire mechanosphere of the tunnel and its pipes, is silenced in its violent exposition to the world above ground. This is what happened in June 2015, when the local authorities decided to evict the community of Gara de Nord, following a media storm generated by a number of international TV reports about life in the tunnels (including an ‘award winning’ short report by the UK Channel 4, and more from Al-Jazeera, Deutsche Welle, ABC and others, all available online). Some of the inhabitants were arrested, other displaced, and the entrances to the tunnels were sealed. According to conversations that I had with one of the few providers of harm-reduction services for drug users in the city, many community members could not sustain themselves outside of the tunnel, and eventually died. What was lost in the eviction was not simply ‘shelter’, but a caring economy made of affective and material connections that went well beyond its depiction by the city above ground. 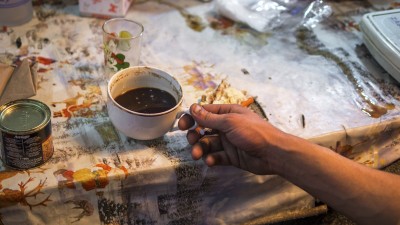 But if one sees the light emerging from the cracks, if one registers the weird politics of care inscribed within the margins, something powerful becomes clear through those lives and stories. It is  ways of being together and becoming - inscriptions -  which Bucharest’s underground communities carved out the belly of the city and through their displaced histories. Resistant to light and to immediate appropriation, they become visible only if one sees their own markings, their own way of tracing life on earth. In their being in-between evident traces and outright ghosts, they reveal with their translucence how life at the margins is possible on its own terms, speaking the proposition of the uninhabitable in its own grammar, at its own tempo.

"Life at the margins is possible on its own terms, speaking the proposition of the uninhabitable in its own grammar, at its own tempo"

Registering what these inscriptions have to say, through their affective and material being in the world, is the prerequisite for writing a radical political history of life at the margins in Bucharest, and possibly beyond. Such an endeavour contains, within itself, an invitation to slow things down and listen, and to be attentive to a politics of endurance that comes through the margins and needs only to be sustained (through appropriate harm reduction interventions) rather than being ‘solved’, or subsumed into the many. The boschetari (homeless, hustlers) of Gara de Nord never saw themselves as home-less, hence the homeless shelter provided by the city was never a solution for them. Radu and its peers inscribed their own way into the city from below, cutting across a long-standing history of neglect and deprivation. What that inscription says and proposes is a life, sustained by a politics of care, that exceeded everything the city has offered, and could ever offer.

"Otherwise caring from the underground " appeared in print issue 9, "Who Cares".