A ritual toolkit for the chinese diaspora amidst geopolitical tremors.

Imperialist agitation towards a war against China is well underway and the psychic methodologies being used to legitimize such a thing are insidious and persistent. The involvement of conspiracy theory gone mainstream within the various forces at play has raised the stakes in 2021, although it’s not clear whether this is the first time in modern history that such a literary device has been used to leverage control over a hegemonic narrative.

Operation Mindfuck, or the occult genesis of the modern day ‘alt-truther’ movement was a satirical religion and reality trolling endeavour that turned into a form of consensus reality. It is therefore by using tools of magical praxis that I write to continue the struggle for seizing the means of reality production in the age of techno-feudalism and palpable climate catastrophe.

This text has been written with a lot of caution because its creatrix feels fear in a multifaceted way. Fear of saying too much. Fear of drawing the wrong kind of attention – both of which pale in comparison to the fear of staying silent about an intuitive and emotional imperative to seek geopolitical stability during a time of ideological decay. Something that is critical for our species to stand a chance of surviving extinction this century.

It is as much a self-help manual as it is an offering to kin; and a call to potential comrades to take up psychic arms.

Settle down in a comfortable space. Meditate and clear your head. Notice, without judgement, how many soundbites from current affairs reporting, ‘branded content’, YouTube sponsored ads, Twitter dogpiles, Guardian headlines, memespeak, Reddit flamewars, WeChat copypastas your aunt sends, identitarian discourse, social media influencer spiel and that anti-vax Telegram chat you got added to are floating around inside you. Observe these wavelengths of noise as they burst into the soft void you are trying to cultivate and allow yourself to gently let them go.

Ask yourself these questions whenever you are confronting a mainstream narrative: Where does this information come from? Who funds it? What is the geopolitical interest in this region (natural resources or military strategy, for example)? Why is this narrative escalating now?

To equip your subconscious against the many illusions that the media apparatus uses to obfuscate the truth, phrase the critical questions above as statements of being for a version of yourself that sees through them, in the present tense. Here are examples of how you could phrase these statements:

I trace information received from mainstream narratives back to their source, including the entity responsible for funding the source.

I understand the geopolitical interest in the region framed by mainstream narratives.

I have awareness of why mainstream narratives are escalating at any point in time.

With these intentions in hand, create three sigils. Do this by writing out each statement on paper, crossing out all the vowels and every consonant that repeats itself. In the case of our statements above, we are left with the following:

I trace information received from mainstream narratives back to their source, including the entity responsible for funding the source.

I understand the geopolitical interest in the region framed by mainstream narratives.

I have awareness of why mainstream narratives are escalating at any point in time.

Write out the nonsensical stream of letters you are left with from each statement, like this:

Turn each line of gibberish into an ideograph of letters that have become pictorial; a symbol of lines – straight, crooked, curved. Feel free to let them overlap or enclose each other, so long as each line makes contact with at least one other in some way. This is your final sigil. Be creative and intuitive with this exercise. Here are three possible visual outcomes of each of the statements in the example above: 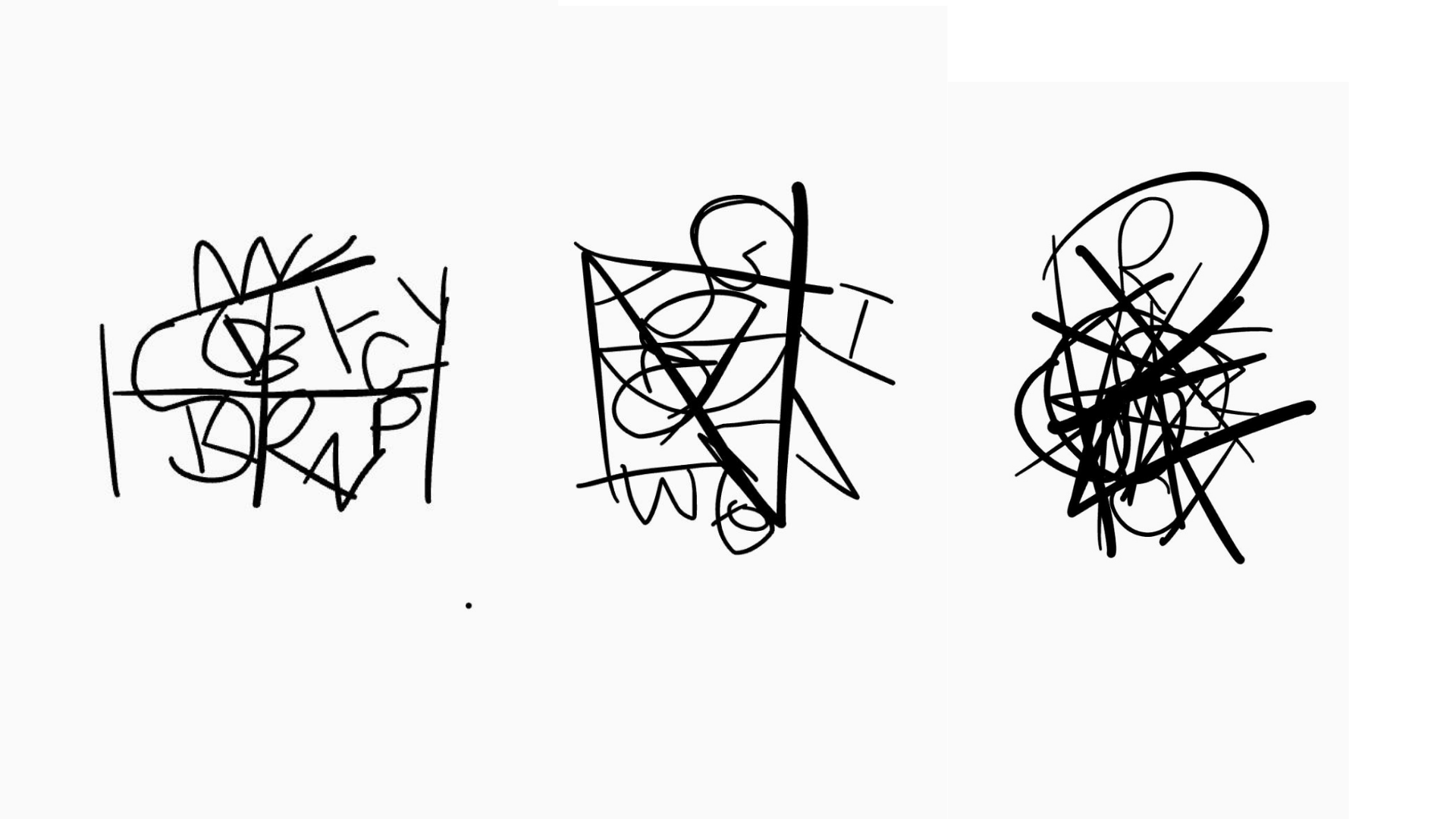 Cut your sigils out of the paper you have been working on and keep them in a safe place, out of sight. You will activate each of them while you are experiencing an altered state of consciousness – in a trance, hallucinatory state, or mid-orgasm, perhaps. During this peak experience, hold your sigil in front of your eyes and let it burn into your retinas. This will programme the intention into your subconscious, after which you must destroy the paper copy.

A novel bogeyman is being conjured out of the projection of the West’s own repressed and disowned shadow – itself a composite manifestation of Sinophobia, Red Scare and imperialism (in the guise of Western exceptionalism). Projective identification occurs when a subject is unable to tolerate the psychic burden of its own shadow material, and unconsciously targets an unwitting Other with its energetic weight.

Shadow work involves the subject taking back their own possession and confronting the burning truth that it has to disclose. Sinophobia, Red Scare and imperialism must be named and taken accountability for by those who have denied it to themselves for so long. It is encoded into culture.

With the clarity you are gaining from your three anchored intentions, you can begin to shine a light onto the projected shadow that is thickening, and realize it is merely a reflection.

四: Tuning into the Felt Sense

Check in with your emotional body. Reflect on the pandemic-related stock photography of folks with racialized features like yours; the 5G conspiracies; jokes about bat wing soup and white violence against East Asians in the streets. Conjure up an image of any relatives you have on the mainland or neighbouring territories. Picture them under siege in a proxy war.

Identify the parts of your body these images activate and zoom in. Name the sensations and allow yourself to accept them without labelling yourself as weak or melodramatic.

The Century of Humiliation. The Nanjing Massacre. The Opium and Cold Wars. You descend from a culture that bears the scars of a particular brand of transgenerational wounding – much of it never atoned for by its perpetrators. Some of it self-inflicted.

There is an annihilating mother and persecutory father archetype within it. And you have inherited the shame and the disavowal that this has internalized in the hurt, damaged and repressed child part of its psyche.

There are no ‘good’ or ‘bad’ actors in this story. Trauma is continuing to play out on a personal, communal, societal and national level. You can never play apologist for the harm that is being inflicted on innocent people, regardless of what may have constellated historically. Be vigilant towards people who adopt a black and white approach towards state action.

Therapy, if you can afford it, can really help you as an individual. At the level of the nation state, healing must come with a reckoning with our collective past and present-day international solidarity.

六: Find the Others

Visualize roots growing out from the soles of your feet and down into the ground, before spreading out beneath the Earth’s surface as a global mycelium network. A vast expanse of mushrooms blossom from your tendrils and shimmer as you register them as people. These are the people you share a common heritage with – similar psychic templates that can allow you to relate to one another in a very specific way.

Consider how you can connect to other nodes in this network, sense check the information you are variously receiving from centralized media apparatus and cross-reference your experiences on the ground.

Seal this ritual programme with a wish to express the truth – the more specific the medium you can envision, the better. Marry the thought of it with a yearning from your heart and a complete surrender of control around the journey. Cast this embodied wish into the waiting arms of some greater, abstract power – even if it feels foolish or totally pointless to you.

It is best to perform this prayer under a new moon – like that of the upcoming Lunar New Year. You can consecrate the action by marrying it with an offering of some of your blood (ideally menstrual) to the earth. This is the blood red of revolutionary will, in solidarity with socialist movements of the Global South throughout the 20th century, and in honour of the female-led cosmetic coalitions of our primordial ancestors as humans evolved into symbolic culture.