Berlin-based artist and writer Sumugan Sivanesan is concerned with how a focus on collective organisation at the recent Dhaka Art Summit, Bangladesh, belies how power is enacted and distributed in such major contemporary art events. 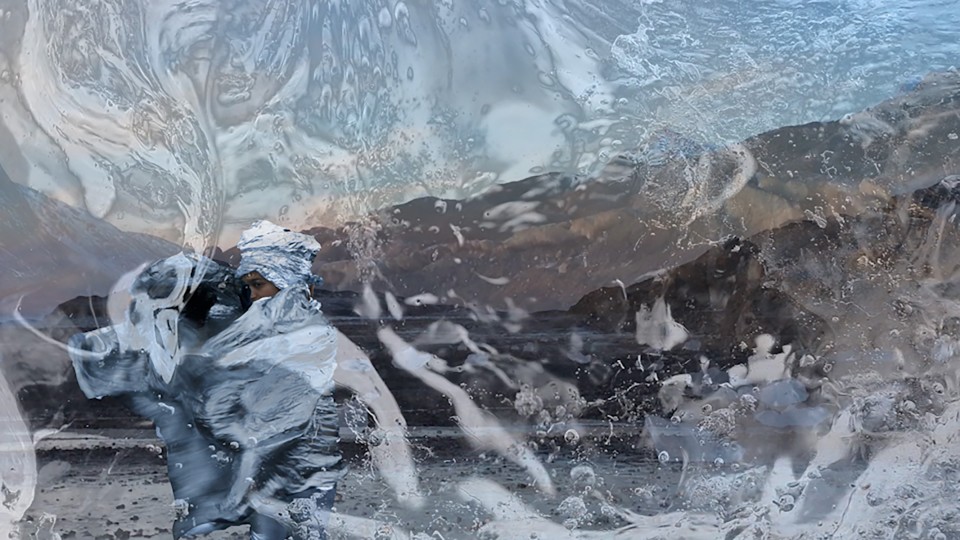 Himali Singh Soin, 'we are opposite like that polar futurisms', 2017-2019, multi-channel video. Courtesy of the artist.

Friends often joke that when bankers get together they talk about art, but when artists get together they talk about money. Given how the interests of private collectors, philanthropic funds and state initiatives align to bankroll contemporary art spectacles, it is impossible to have a critical discussion about biennales and major periodic art events without raising their entanglements with corporate interests.

The globalising system of contemporary art brings economic interests, political power and institutions for the production of culture and knowledge together with organisations and individuals dedicated to the novel production of the new. The term ‘culture washing’ describes how corporations and philanthropic organisations financed by those who profit from exploitative practices, fund art events to manoeuvre their name brands, align themselves with prestige culture and improve their social capital. Alternatively, such arrangements also make contemporary art available as a form of activism for the rich, as it is a means by which the wealthy can flex their financial and political muscle to promote issues such as climate change, gender justice and decolonisation.

Liberated from Pakistan in 1971, The People’s Republic of Bangladesh is a frail and questionable democracy. With a population of over 160 million and more than 20 million living in the capital, Dhaka, the young nation is marked by extreme disparities between rich and poor, exploitative working conditions notably in fishing and garment and textiles industries, pollution and environmental degradation, marginalised indigenous groups and creeping Wahhabism.

The Dhaka Art Summit (DAS) was founded in 2012 by the Bangladeshi art collector couple Nadia and Rajeeb Samdani. Since 2014, DAS has been organised by the Samdani Art Foundation, steered by Diana Campbell Betancourt as artistic director. She has worked extensively in India, the Philippines and South Asia. As Bangladesh has no dedicated state-backed infrastructure for contemporary art, the Samdani appears as its torchbearers bringing to the people associated ideas of global civil society.

DAS is realised biannually in collaboration with the state-funded Shilpakala Academy and is free to visit. I attended for the first time this year and over it’s nine days I was astonished by the crowds who amassed every afternoon to enthusiastically engage with the exhibition, if only as a backdrop for proliferating selfies. While DAS hyped its fifth edition themed ‘Seismic Movements’ on Facebook as the “event of the decade”, the question that I kept asking was: ‘Who is this all for?’

Kehkasha Sabah, an assistant curator for ‘Collective Movements’ explained to me that the so-called ‘Global South’ is where the majority of the world’s population lives, nevertheless art audiences are often directed to look to the ‘North’ for innovation and ideas about the future. She offered that while ideas are also developed in the South they might not take shape as gallery-focused, ‘professionalised’ art. Sabah proposed that in Bangladesh this was due to scarce state funding for contemporary art and for young artists, adding:

“We do not make work for museums, but for our communities.”

‘Collective Movements’ brought together local collectives with those from abroad to realise projects that are often engaged with local practices and concerns. Berlin’s SAVVY Contemporary and Jothashilpa, a Dhaka-based centre for traditional and contemporary arts, were the most prominent of these collaborations. Geographies of Imagination, is purportedly the largest cinema–banner painting in Bangladesh; a colourful, ‘incomplete timeline’ interweaving events, movements and figures significant to the communities that both organisations represent, rendered as painted icons and scenarios. Snaking around the plaza, Geographies of Imagination was realised in bold, striking colours by local commercial painters Mohammad Shoaib, Didarul Dipu S., M. Sumon, Abdur Rob, Mohammad Yusuf, Rafiqul Islam Shafikul, Mohammad Rahim Badir, Mohammad Iqbal, Mohammad Dulal, Aftab Alam, Mohammad Javed and Mohammad Selim. It served as an architectural divider and thematic backdrop for many of the activities that occurred in the plaza. 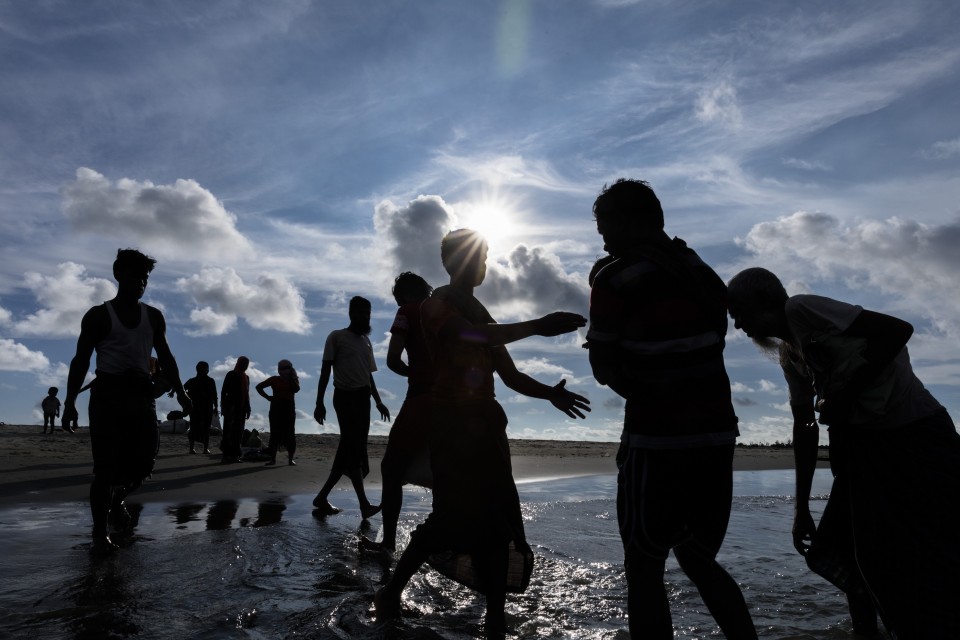 Pangrok Sulap, whose name roughly translates as ‘punk rock shack’, worked with the DAS mediation team. A collective of artists, musicians and social activists, Pangrok Sulap count no permanent members and are open to anyone willing to participate. They are primarily active amongst the rural (indigenous) communities of Malaysian Borneo, one of world’s most biodiverse areas that has been long beset by illegal logging, wildlife poaching and plantation farming. Over the days of the Summit, Pangrok Sulap worked with art enthusiasts to make large, detailed prints that pictured local street life, urban and folk art forms, and highlighted issues such as pollution, poverty and the right to protest. I was lucky enough to be in the plaza one afternoon when the collective ‘unveiled’ one of these works. Laying a carved linoleum on the floor, visitors, artists and curators crowded around to help roll ink over the piece. Once a roll of canvas was carefully laid across it, we were invited to jump and dance barefoot on top of it all to seal the print. While the collective played a short set of brash songs on a range of stringed instruments and improvised percussion, we bumped and jostled on the canvas, laughing and shrieking along to their catchy choruses. Afterwards the print was unceremoniously pegged to a wall crowded with other works and partially obscured by a pillar. Sensitive to the difference in care between displaying work and its joyous mode of production, the Melbourne-based curator Laura McLean commented that the collective space reminded her of a school fair in which projects are displayed with little planning or consideration.

More troubling was the issue of translation, especially during the symposium, ‘Condition Report 4: Stepping out of line; Art Collectives and Translocal Parallelism’. Although ‘Bangladesh’ means ‘the land of those who speak Bengali’, most panels were held in English with no translators, excluding many locals. This was particularly notable during the panel ‘Histories of Indigenous Resistance and Gender in South Asia and the Pacific’ (February 8). Speaking in Bengali, Joydeb Roaja of the Hill Artists Group explained that he spoke several indigenous languages not recognised by the Bangladeshi state. While acknowledging the practical benefits of speaking English, he refused to learn another colonial language. Further contributing to the discomfort of this panel, a volunteer translator drew our attention to several men in military fatigues who could be seen around the collaboratives hub. As many indigenous groups in Bangladesh have a tense relationship with authorities, the safety of participants was called into question.

The last day of the Summit (February 15) opened with the panel ‘Collective Practice and Sovereignty’ featuring the indigenous collectives Hill Artists Group, Mata Aho Collective, Pangrok Sulap, proppaNOW. Although too brief, a discussion emerged about how collectives come together to empower themselves and the panel presentations made clear the differences in power each group had the capacity to enact. Artists from the Hill Group in Bangladesh seemed to be working mostly within their communities whilst at the other end of the spectrum the Brisbane-based proppaNOW have established themselves on the global art circuit with considerable state funding and institutional and commercial gallery backing. Indeed proppaNOW, spokesperson, co-founder and art provocateur Richard Bell recently intervened in the pre-eminent art spectacle the 2019 Venice Biennale, with a barge-mounted Australian Pavilion wrapped in chains.

During the screening and panel discussion ‘Gaza on my Mind’, the Otolith Group’s Kodwo Eshun cited Foucault to claim that power emerges in attempts to control and determine life: Ergo, life steals away from power. In the professionalised art world, collectives formed by marginalised communities operate under a regime of institutions and ‘high net worth individuals’ who consolidate their power as culture. The co-opting of aesthetics of resistance via the interplay of state, corporate and private interests is one of the markers of ‘The Contemporary’, in which dealings in art power are a sport of the elite. DAS may be a ticketless event, nevertheless barriers to access exist, such as education, class, leisure time and other privileges. Removing access to ‘The Contemporary’ is an affront to those who feel entitled to participate in it (myself included), and is a means by which austerity can be implemented. Thus, major art events are a means by which the privileged and aspirational (ie. arts professionals) are kept in the service of those who wield power.

Over the last weekend of DAS, Gudskul took over the Collectives Hub. Gudskul is a pedagogical programme devised by Jakarta-based collectives Ruangrupa, Serrum and Grafis Huru Hara, and for DAS also included Pangrok Sulap and artists involved with Jothashilpa. Activities offered included various forms of print-making and an ‘interactive action’, Speculative Collective. This was effectively a speed dating exercise for those seeking to form collectives, in which participants shared the unique knowledge they held as individuals to discuss points of commonality and potential. On the last day of the Summit the Collectives Hub was transformed into ‘Lonely Market’ where various collectives featured in DAS peddled their handicrafts and merchandise.

If the argument goes that the canon of Western art reinforces the subjective experience of the individual, then in contrast (postcolonial) artist collectives might emphasise organisational forms, group identities, participatory politics and processes. After DAS closed its doors and as ‘Lonely Market’ packed down, I sat with Amy Zahrawaan, Lilu Herlambang and MG Pringgotono who had been running Gudskul, after a long day—a long week—in which they had been kept busy both on and off the official programme. As we waited for the minivan that would shuttle them back to their hotel we talked about Gudskul’s mode of organisation, which brings together various collectives to share skills, knowledge, resources and networks. Pringgotono noted that although they are individual artists, when they come together unexpected things happen. Along with Herlambang, a current participant in Gudskul’s year-long educational programme in Jakarta, they emphasised a practice known in Indonesia as nongkrong; hanging out and being together without any specific purpose or intention.

Notably one of Gudskul’s founding collectives, Ruangrupa, who emerged in the early 2000s in Jakarta, are now busy with the upcoming Documenta 15, 2022. Occurring every five years in Kassel, Documenta is probably the most prestigious contemporary art event in the world. Ruangrupa are both the first collective and the first from Asia to serve as its directors, arguably determining art trends in the years leading up to it and possibly marking a power shift in how institutionalised art is organised. Curious as to what a more culturally and epistemologically diverse Documenta might be, Ruangrupa co-founder Ade Darmawan offers:

If Documenta was launched in 1955 to heal war wounds, why shouldn’t we focus Documenta 15 on today’s injuries, especially ones rooted in colonialism, capitalism or patriarchal structures, and contrast them with partnership-based models that enable people to have a different view of the world?(1)

I wonder if Ruangrupa will make space for nongkrong in the upcoming Documenta? Will they foreground collective self-organisation or attempt to redistribute (art) power? While organisational oversights at DAS seemed to be accepted as part of its ‘Third World charm’ and were overcome by goodwill and enthusiasm, will such altruism extend to one of the most anticipated art events in one of the world’s richest nations? If Ruangrupa proves it is possible to steal Documenta away from those who maintain the status quo, that would be, without hype, a seismic movement.