Rerouting our being in the world, as proposed by a remote festival in the French Alps.

Reduce stress. That’s what he told us, in a tone that intertwined itself with the movements of pines in the wind. But I couldn’t leave my phone. I was glued to the anxiety produced by the damage control being held on the other side of the line. Without command, Tom Goldstein made us – that’s me, and the artists from the festival – take very slow steps into the trees. Forest Bathing, that’s what this practice is called. A mindful approach to nature, a term from Japanese traditions of just being in it. My external senses were rather in contact with that phone, until I managed to shut down the mental connection with the office – very brutally, as much as it is ungraspable – to take off my shoes, and wander into the experience that was offered to me.

For a glimpse of time, I avoid thinking. The information held in our brain, while breathing the purest air you can find on earth, seems to unplug from the frenzied loads of catastrophic news from Afghanistan, Lebanon, the malicious conservativeness from populist media, the memes breaking through the lines between fact and fiction on the internet. But the helicopters are all over. Summer is the perfect time for mildly-obsessed extreme sports tourists to come to Chamonix and enjoy the privileges enclosed on the French Alps at full speed.

Chamonix is a busy place: it traces back to the first steps of the imperialist dream of the Grand Tours, and Mont Blanc is today an emblematic peak of extraordinary beauty, empowered by extractivist practices of late 19th century exoticism. But Chamonix is not only interesting to victims of today’s hyper-capitalism - it is also interesting to those who want to join the antidote to consumerism, like Laurène Marechal. A curator by education, married to a carpenter and vibrantly working hard through community to nest a less conformist approach to planetary commons, Laurène founded Artòcene, a festival that aims to precipitate the connection between realities of alternate, inner worlds and the practices of art.

Artocène emanates in its first edition as a nuclear gathering for young international artists and architects engaging with the forest as a topos, as a source, as commons that need urgent restoration.

Inner Forest, the title of the festival, took me through my inner struggle, my will to disassociate the I from the exterior world, and granted me focus on an exhibition that challenges our ways of engaging with our own subjectivity. The forest bath turned into a great gift and the best way to start an exhibition visit: through meditation. I close my eyes and connect the cast of the forest in front of me with the lush vegetation in the painting series of Ariele Bacchetti, named after a poem that Emily Dickinson wrote in relation to a greater nature than the one in her garden in Amherst, Massachusetts. Decades later, "There is Another Sky" is less about the Garden of Eden than about the indefinite spaces between urban decadence, hidden in the darkness of landscapes that devoid any human presence. Rats, mermaids, trippers: the confusion (and at times, hallucination) of time and forms is omnipresent in the Mediathèque of Chamonix. 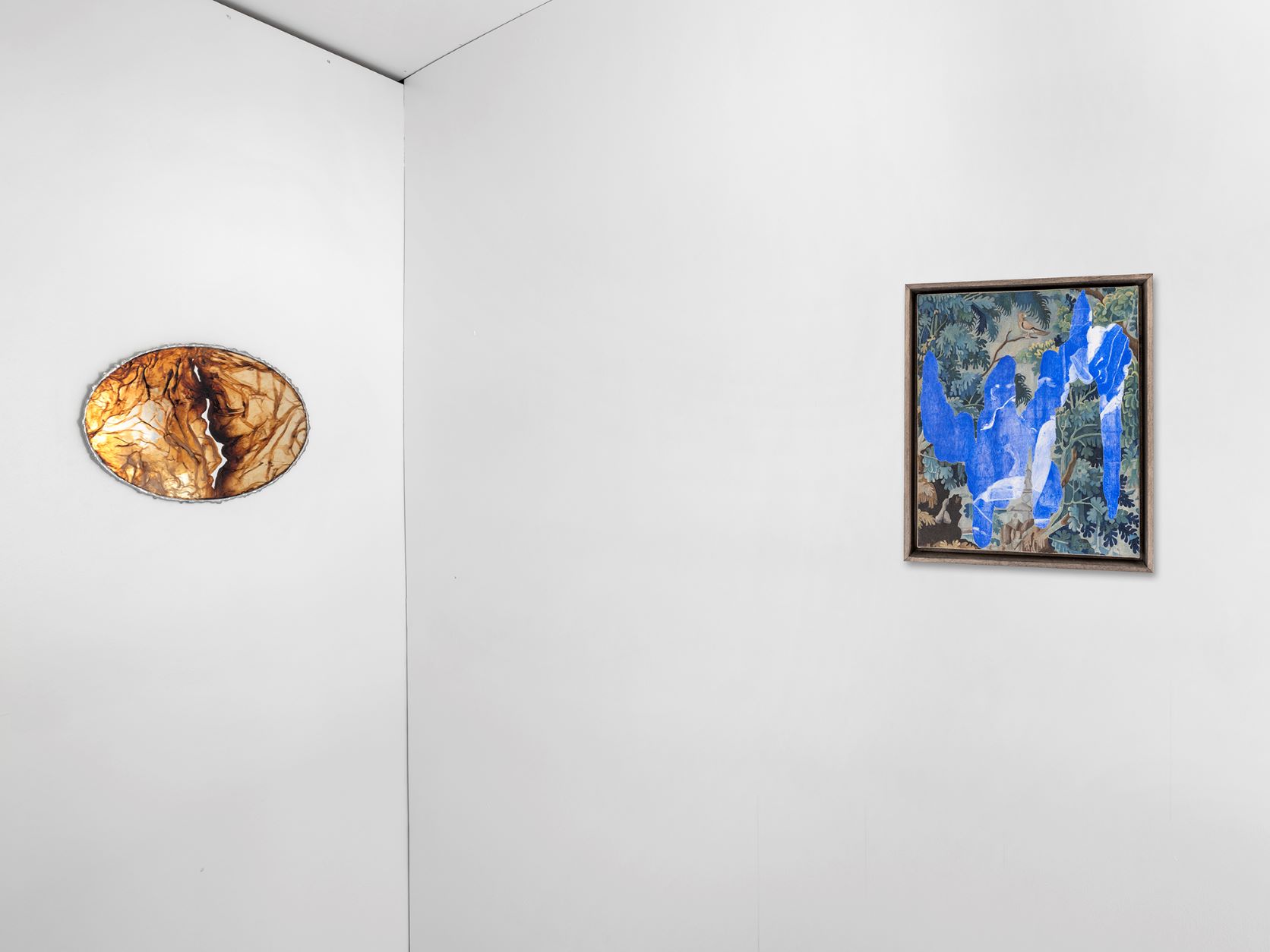 Hearing the cold waters of the river spill through the small center of the village while leaving Bacchettis exhibition to cross to the main venue of the festival, this darkness reassures and distresses the strangeness of the forest in my memory. My memory of the forest is rather haunted by The Blair Witch Project, and fairy tales my grandmother used to tell with her most accurate creepiness. She loved to scare me. We never made it into the woods. I like to think she was boosting my sense for fantasy with that. Who knows. Talking about reminiscences: Jean Prouvé’s demountable houses are present at the core of the spatial structure that architects Flavien Menu & Frédérique Barchelard (Wald.City) brought from their residency at the Villa Medici in Rome to the French Alps. The “Proto-Habitat” is here as a temporary art centre, as an ecological, nomadic and modular pavilion that falls into the places of the discourses that inhabit it. Paintings and sculptures by Antoine Carbonne, Laetitia de Chocqueuse, Charlotte Gautier Van Tour, Ellande Jaureguiberry and Théo Massoulier gracefully surround those who enter the cozy prototype of an apartment, as compositions in miniature and overdimensioned anthropo- and zoo-morphic forms. Proto-Habitat is the ideal Thoreau Suite, built on locally sourced materials, mingles with the reflections casted in these pieces. 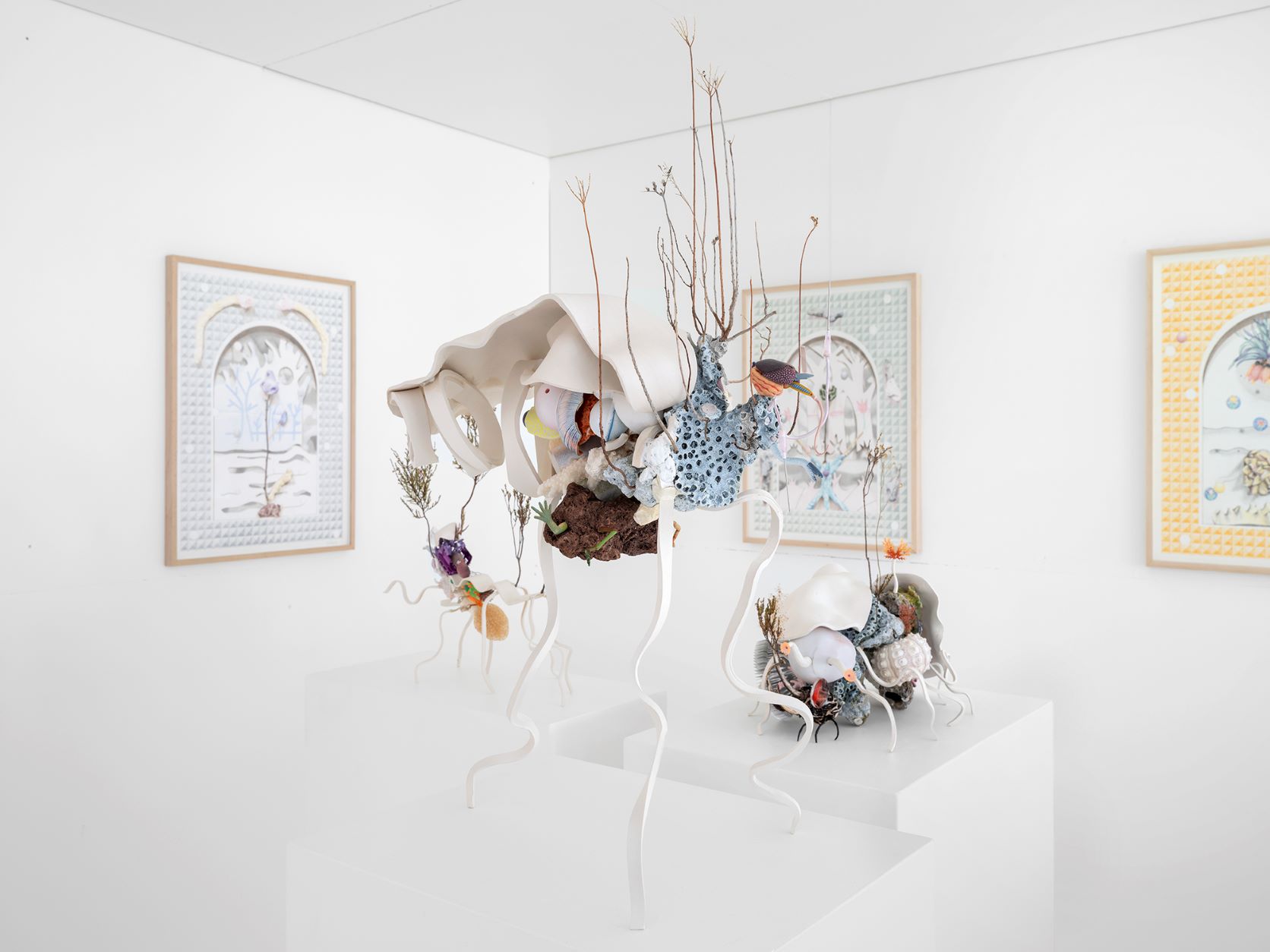 Ellande Jaureguiberry's drawings cite the function that the Très Riches Heures of the Duc de Berry, once played in medieval Limbourg, a historical piece of art history that gathered idealized pastoral situations in miniature, explaining harvest to the wealthiest people of the time through the obscene hierarchy of Christian devotion. But Jaureguiberry turns the books of the hours upside-down, emptying it like a trash bin and demonstrating the scarcity from which an artistic environment like his atelier is made of: raw materials, trash, dried flowers. These material-objects begin a dance, one with or within the other, one against the other; this allows altercations that echo economic, cultural or ecological concerns, from which he provokes fruitful angles around time perception; just like Tom’s forest bath. The drawings are also strongly connected to the determination of seasons in Japan, where he spent a long period of time within a residency.

The liquid, the moving, the unstable also feature in the paintings by Antoine Carbonne, which linger between allegories from video games like Fortnight and René Daumal's Mont Analogue, one of the few writings from the last century to have combined Eastern and Western thought into something more valuable than a set of personal eccentricities. Carbonne has also been chosen to intervene in one of the oldest facades of Chamonix, with Doumal’s symbolism as a point of reference. 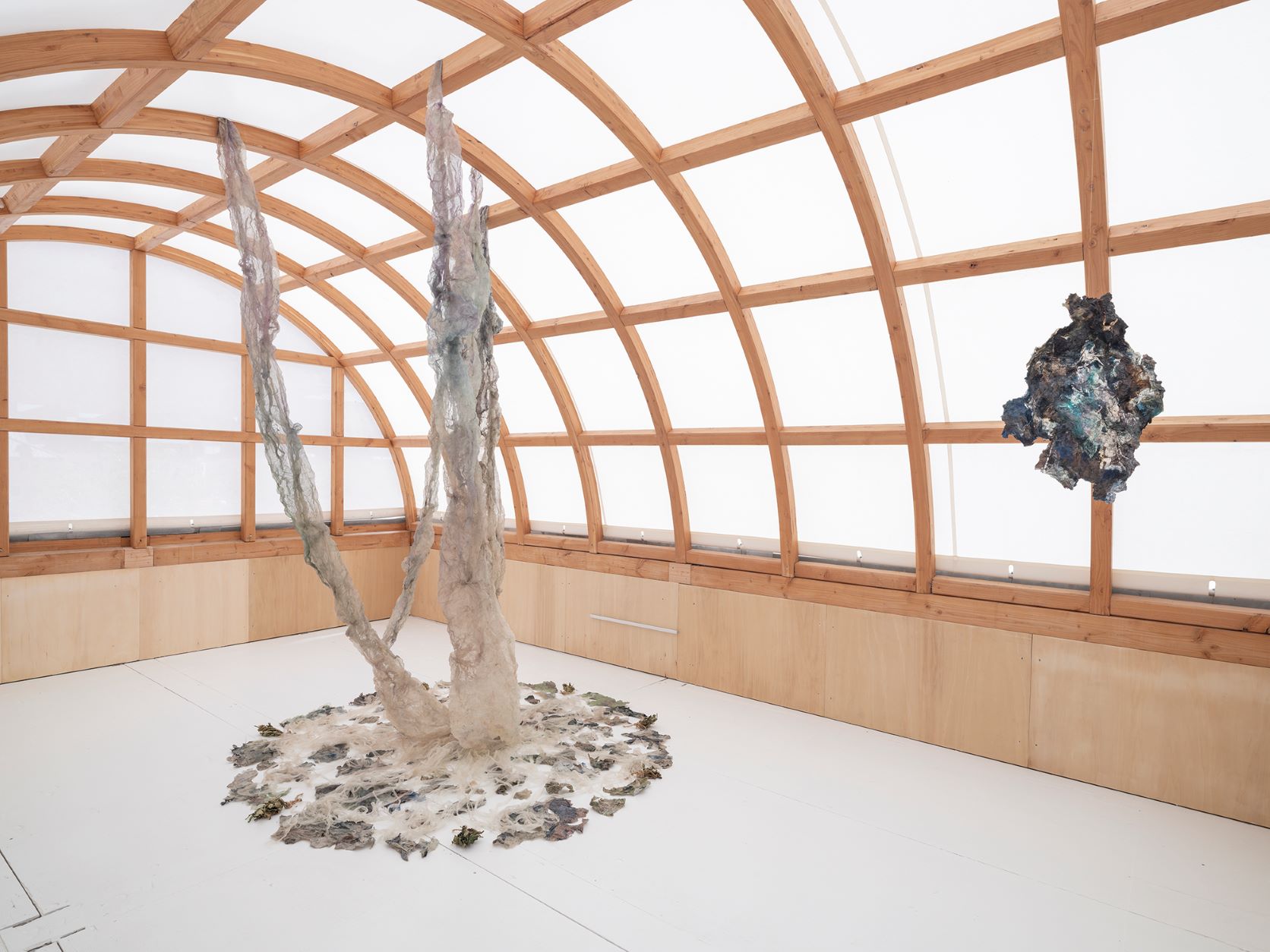 Mount Analogue, in its simplicity of expression and universality of meaning, guides me to the core of the cultural and social phenomena that Artòcene is addressing; namely, that of eurocentrism as a vehicle and obstacle to engaging with the Alps.

The glaciers are shrinking, the helicopters are patrolling the sky incessantly. Symbolic tales full of human sympathy are not enough anymore. If the Anthropocene is proposed as a geological epoch dating from the commencement of significant human impact on Earth's geology and ecosystems, including, but not limited to, anthropogenic climate change, then the festival aims to repurpose the chronology of human activity to, well, what art practices are now meant to serve for: to contribute to the reversion of the ecological and social crisis experience globally, and to arrive to a post-industrial era as soon as possible, in which deceleration not only allows us to react towards commons emotionally, but also actively, away from exploitation.

Paulina Michnowska’s billboards on the park Couttet compose a certain process in this direction. What still seems a fairy tale can be physically explored beyond historical folklore, and turned into taking over our destiny. By reading Tarot cards, for example, as a visual allegory rooted in representing not only one’s own subjectivity, but the world itself as its frame. The chosen figures – the lovers, the fool, the devil – take me to the indefinite territory of fortune. They illuminate, in its almost mannerist lightness, humanity’s very own strange density. They woke me up from a siesta, with a very stimulating thought: it’s not about alarmism, but rather our attitude towards the renewal of commons that will allow consciousness to rebuild the planet. Seems so old fashioned to say this, but that’s all there is for now.

“Since ancient times, the forest has been subject to numerous myths and tales. Today, the forest is still an important reference to the collective imagination.” [1] 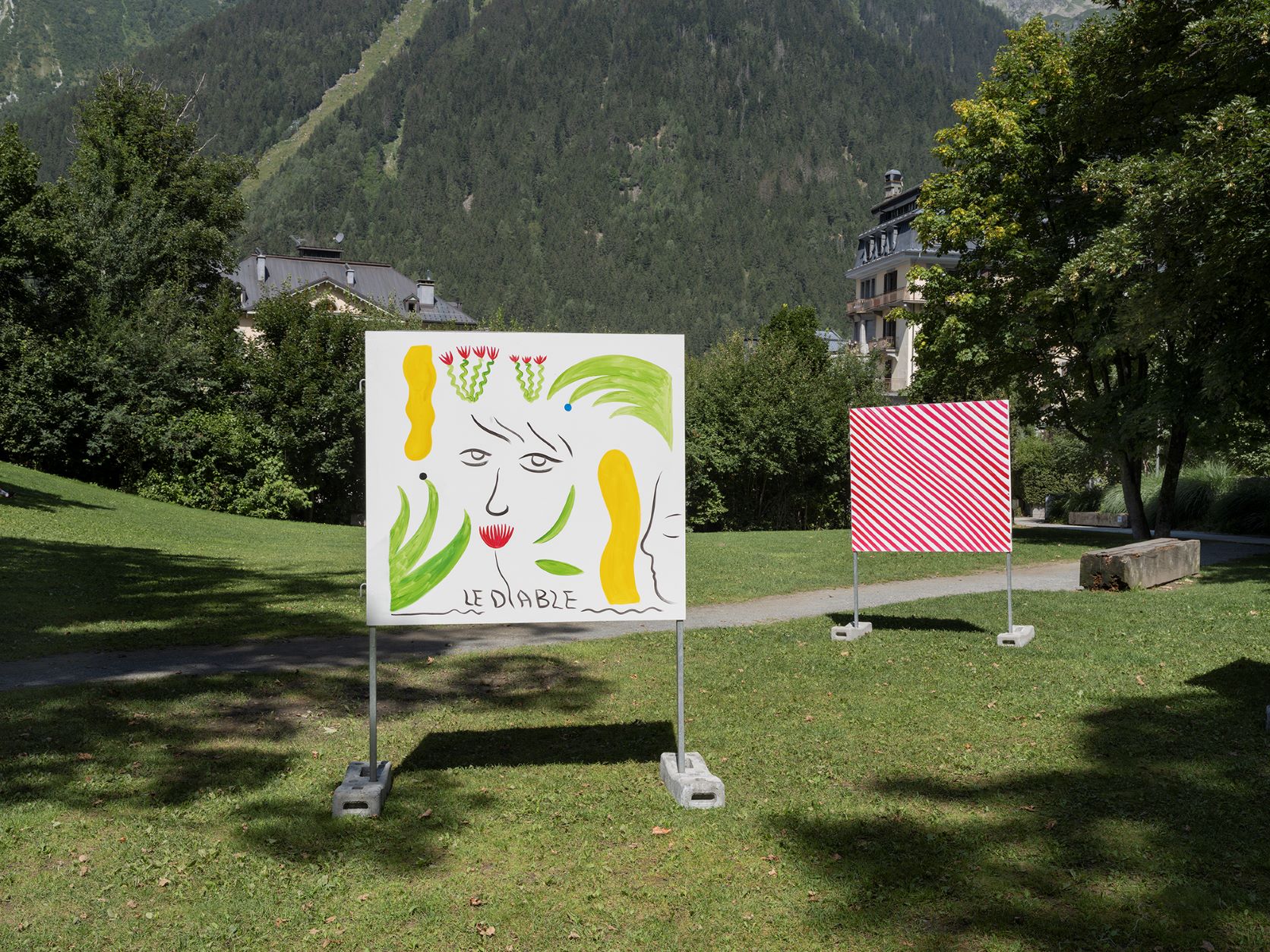 Artocène, exhibition and extensive public program are on view until September 19, 2021.