Moments of significant shifts in a safe place like the Biennale Gherdëina.

There is something uncanny about the landscape of the Dolomites. A sort of suspension frames this impression while reflecting on its name as a site of so-called World Heritage (UNESCO), its past as a battlefield in the history of European wars and its present as a sporting scenario. This suspension is carried by the yellow dust of pollinating beings that is remarkably visible. This suspension swollens my eyes, my nose, my throat, and I can barely get some air here without antihistamines. This suspension has a name: Panspermia.

From Ancient Greek πᾶν (pan)  'all ', and σπέρμα (sperma) 'seed', panspermia is a speculative term for all the life that exists throughout the universe– expanding from celestial beings to microorganisms. First proposed by the Greek Philosopher Anaxagoras, panspermia builds a thread between interstellar visions, scientific hypotheses and the Biennale of Gherdëina. The air in Val Gardena, our hosting landscape, is thus carrying unintended contamination from organic molecules into the exhibition across the valleys, museums and hotels of the area, and with it, a direct connection between the interspecific variations of discourses in ecology, eco-feminism and arts.

Persones Persons, title of this year’s Biennale of Gherdëina, addresses individuals and artists, pines and alpine water, insects and seeds as protagonists, rooting in the exchange between people, animals, plants, minerals on an intimate trip. The press release of the exhibition is already poetic, personal written by its curators, Lucia Petroiusti and Filippa Ramos:

“We want to tell you about this person who is a tree, who is a lake, who is a stone, who is you and who is me. About this person who is a star and who is young because they are old; who speaks the language of minerals, sings the song of rivers and howls at dawn, because they are also a dog. We want to tell you about their dreams, griefs and desires. About their body, their hand that gives and their hand that takes, their eyes that hear and tongue that paints; how their roots walk and their fur travels.” 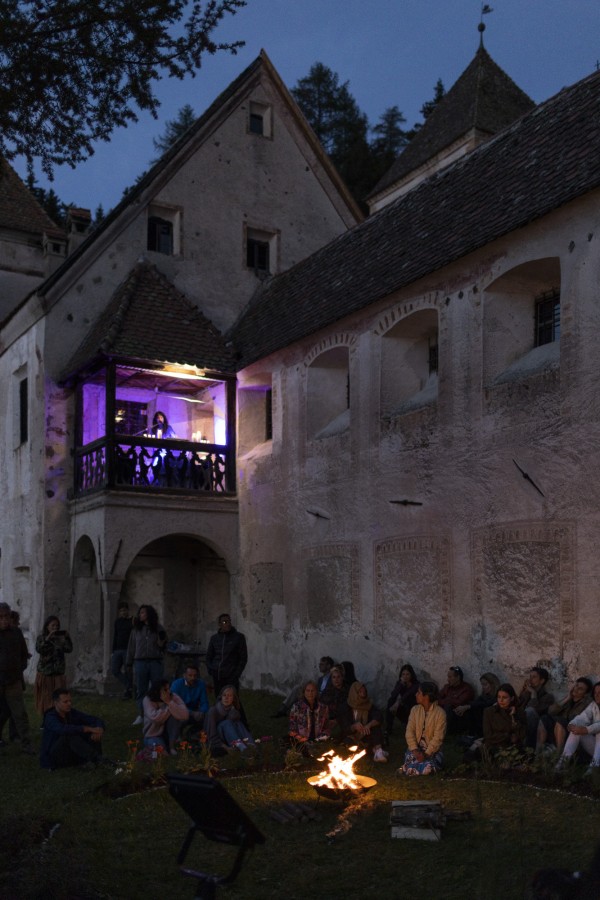 Encounters might seem to be obvious in this constellation –it’s a biennial like any other, at the end of the day, you might think– but we all seemed to understand that it is not through personhood but in mycological connection that we can aim to nurture atmospheres together. These are the stories, legends, languages and traditions that shaped the first days:

Oscar took me for a walk. He is doing environmental studies at the University of Bolzano and wants to develop experimental ways for visitors to engage and take care of National Parks in Colombia. He forces me to pay attention while he describes the carved stones of the water fountain depicting Saint Ulrich protecting a village from flames, the transformation of dandelions in water or in the dark, the taste of leaves, the wounded body of a tree struck by lightning. Oscar is also mimicrying Alex Cecchetti, author of this place-based, community-driven intervention that takes everyone to the top of Lech de Lagustel and explains the need for near-mystical experience of the everyday. For Sentiero, Cecchetti dresses his group in tunicas printed with natural colors who lead a path that is choreographed with human and non-human knowledge to a lodge he builds for contemplation, food and deep listening of the surroundings. 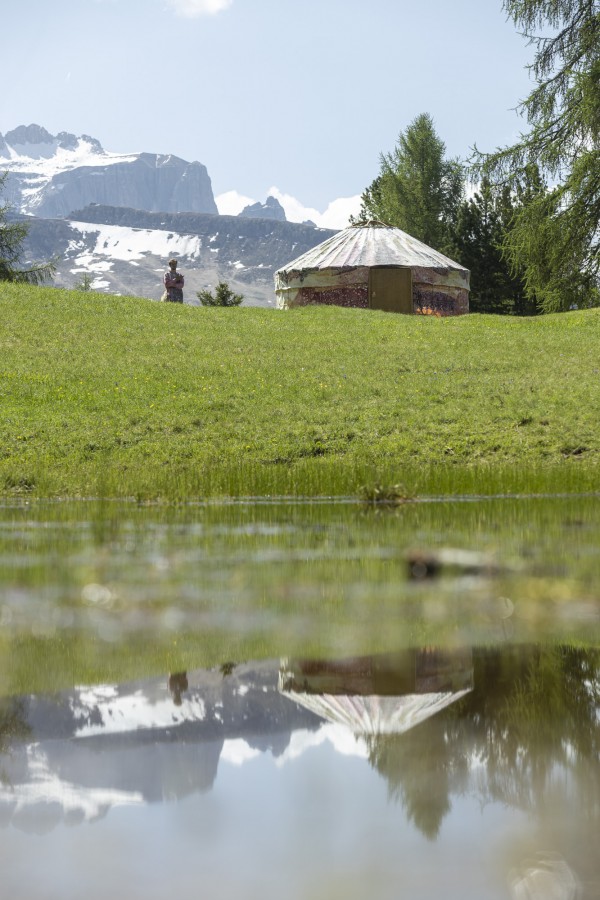 Hiking through the fields of Valunga is like becoming a sponge. As soon as we left the parking lot we came listening to the freshly released album of Concha Buika with Moritz, who was having an internship at the biennial, just got his driver’s license and gave me a lift. We entered the narrow formations of mountains holding the space for breathing. As soon as we laid down on Barbara Gamper’s indigo-colored sea-like linen cloths, I felt pre-vertebrate, filled by her voice with waves, with the dream of fluidly bonding with the soil beneath the crowd gathered in silence. I follow Barbara’s voice and adapt to the warmth of the sun and the bodies surrounding me as we create an assemblage of cells. Waiving in the wind, her fabrics decorate this territory of meditation; what she calls somatic encounters/earthly matter(s) and which poetize in texts, her practice between spans movement, somatic therapy and performance. 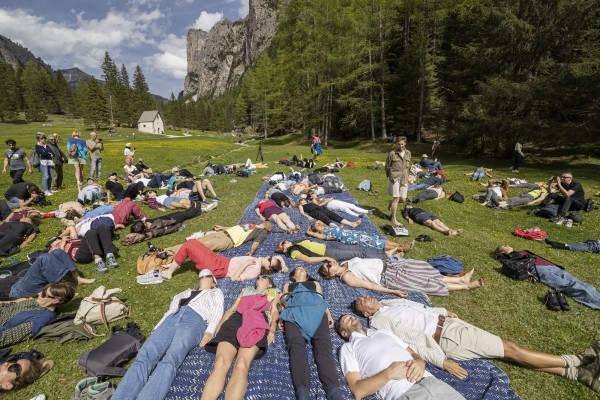 Not far from there, Eduardo Navarro sculpted a huge peace lily which can be entered. People can find refuge in this cozy space inside a plant, while animals drink water from the top concave white blossoms. Spathipyllum Auris: Even though a latin name for an artwork makes quite an antiquated impression, Eduardo destabilizes the notion of etymological authority from science, speaking of the uncertain. Known for sketching visual languages rather than appropriating them, Navarro incerts the act of contemplation as a state between animals and divinities. Sister, a large polychrome terracotta sculpture glazed in white dolomite dust placed in the old castle of Fischburg by Chiara Camoni, is such an appearance. Enacted in a small corner of the courtyard and lit by small candles on the floor, the sorceress creature is a wonderful manifestation of material harmony between clay, leaves, branches, wood, wool, and caricaturesque gestures of a crafty, spiritual poem. In awe, my eyes celebrate the life of this powerful, delicate monument of eco-feminist theories and collaborative practices that echo forms without any pretention of mythical being. If wisdom could take a form, that could be Sister. 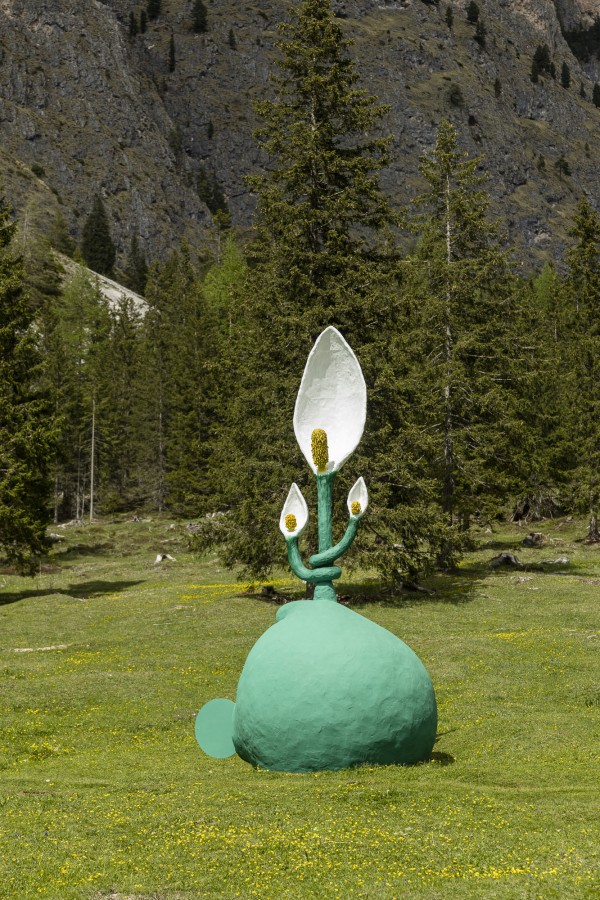 Strongly marked by own experiences, the 24 artworks commissioned and exhibited in different places of Val Gardena hold a strong connection between stories, legends, languages and traditions. By being vessels that challenge the clichés of the Dolomites as a tourist destination, the artworks open up the place for another kind of adaptation. Adaptation, given by one's own acknowledgment, that once in life, personhood may be blurred in wildlife and landscape. Artistic procedures –be it bread baking in a giant pre columbian alluring oven/sculpture such as the ones of Gabriel Chaile, the smell of blue crap pigmented fountain of Revital Cohen and Tuur Van Balen, the seed sharings of Sergio Rojas across the streets of Saint Ulrich or the sound baths in the freshness of the night by Ignota– can contribute to this recognition of natural wholeness. In shaping and constituting one another in a continuous intertwining of mutual influence and attunement, my allergy gets less unbearable and consecrated to the rocky cathedrals around me. I can breathe again. 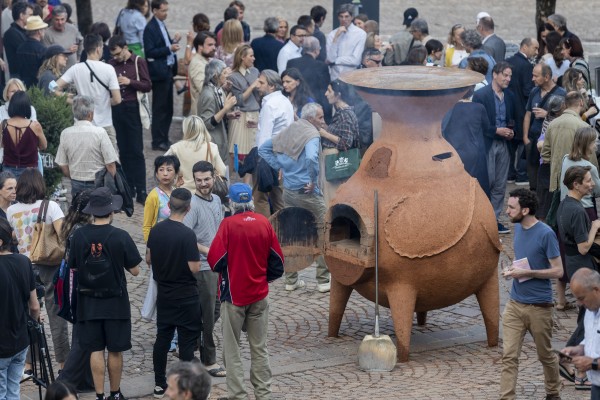