How Movement shapes the Politics in Esch-Belval.

Facing gliding limbs that flailed in synchronized choreography in the Luxembourgish district of Esch-Belval, the young spandex laden dancers in Cecilia Bengolea’s La Danse des Éléments (2022) have kept the audience members in suspended animation. They swayed from one side of a former steel blast furnace to the other. Mostly site-specific, Bengolea’s work commissioned by Mudam Luxembourg and Esch 2022, this year’s European Capital of Culture, is placed in a now-shut and mostly deserted industrious landscape. The fragile dancers are dwarfed and mirrored by the eclipsing colossal steel furnaces and intricate tube systems that have been shut down for decades. When fused to one another, the presentation of bodies in desolate environments ask the perplexing question if physical movement in a stagnant environment is in and of itself a form of protest. One way to begin and answer this question is to realize that Esch-Belval has a cyclical relationship to the corporal. What used to be an idealized spa resort where select bodies have reposed has curdled into one of the biggest steelworks in the continent at the turn of the twentieth century. No longer a site of romantic composure, the new bodies and differentiated motions that have now come to populate the region were predominantly manual, laboring and True Blue-collar. Bodies in Esch-Belval were no longer considered a romantic temple but a durable, and mostly masculine tool. From there on it’s a rather familiar story. The neoliberalization of Luxembourg’s market economy in the eighties has compelled the majority of factories to shut down, and its communities to disperse. No longer a communal site of effort, it must have been astonishing to witness imperishable steel factories collapse by detonation. Everlasting lasts no more. Not to mention the fact that the character of the workers was no longer defined by the rugged material they have once processed. Right after the final bulldozare has swept away some of the rubble, a bustling industry has been depleted of the motions, sounds and correspondence of those that have composed it. Imagine the stillness. Imagine strolling down rejection– each and every step echoed by soaring metallic carcasses. Unhomely, yes, and most likely the reason why Bengolea decided to highlight skimpy androgynous ballerinas as the flip side of viril, modern mythologies. Donning harnesses and goggles, Bengolea’s crew brazenly assumed the role of the steelworkers in Esch-Belval when they first appeared on top of the decapitated ruins, thus drawing a clear line between political movements to their own bodily movements. No longer confined to crammed plants, every gesture in the performance articulated a different reclamation of space. Without the coercive structuring of motion by means of wage labor, bodies in Esch-Belval have finally earned the privilege of artistic interpretation, and that’s not always a good thing. Burdened with freedom, the assertions made by the nine-person dance group have casted a mélange of intentions. What began with historical nods and a warm welcome of grace and color has caved under its forced bridging of the now to the then. Moments after the stage had been initially claimed by silken moves and muse intimacy, the trap track “Brick in yo face” blasted from the speakers. Ripped from any context and kind of undeserving, the ensemble responded with cocked gunshot imitations aimed at the audience members. This choreographic choice estranged spectators from performers and performers from what was already defined in their performance. From there on out, every other bit in the show was torn from somewhere else– only the wreckage in the background remained intact. But in doing so, Bengolea has pointed out possibilities. Maybe at times biting off more than it can chew, the physicality of La Danse des Éléments invites its viewers to spectate on forces beyond exploitation, a collective presence that goes beyond essentialization. This time around, collective strength is guaranteed by individual delicacy. 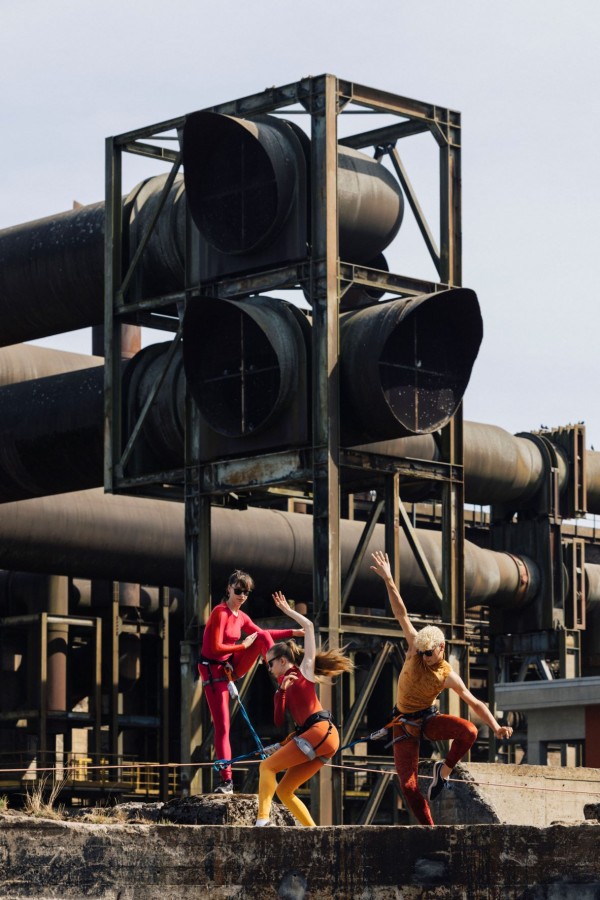 Luxembourg is small. What that means is that the all too familiar distinctions between central and peripheral are no longer just arbitrary. They are absurd. After two glasses and some slouching, organizers admit that it remains a challenge to convince residents of Luxembourg City to visit the outskirts of Esch-Belval that lies on the border with France– a staggering twenty minutes car drive away. With locals preferring to keep their limbs from gliding, Bengolea has staged an additional performance in Mudam’s Great Hall. Her work, Deary Steel (2022), resumes the leitmotif of burden, weight and agility, as piles of slag that are scattered on the floor hint to our peripheral steelmaking vision. Adjacent, there’s a multi-channel video installation. Beaming familiar visions, the video stars a clumsy cyborg with womanly curves trotting up and down a steel plant. Being part person-part machine, the motion captured cyborg is rusty and unmatched by the liberty of its human counterparts. Looking at it, maybe outdated machinery and forsaken plants consolidated humanity– stirring comfort that control over what we forged is still viable. Materiality and the contemporary ages as we do. By reminding us that, all the movements present on stage and in site are confined to their brevity, since all that is solid melts into air.