The task of excavating, amplifying, intervening the perennials' current “Force Times Distance: On Labour and its Sonic Ecologies”.

Drums came with the drizzling morning, announcing the procession. Percussions and winds emitted Caribbean rhythms that sprung across the park. Mended by Ritmo, an Amsterdam-based brass band, the sonic intervention remixed and reshaped the park’s continuum and exposed unknown undercurrents: A seamless, continuously evolving, bewitching beat swept the listeners and passersby into a sea of expanding sound waves, amplifying the words of Bonaventure Soh Bejeng Ndikung, artistic director of Sonsbeek 20-24, about the thin line between lamentation and celebration. On this day, July 1st, it’s the commemoration of Keti Koti, the day slavery was officially abolished in the then Dutch colony of Surinam, which still remained under Dutch rule until 1975. Keti Koti, meaning ‘the chain is broken’ in Sranantongo, could be seen as a Mise-en-Abyme of Sonsbeek 20-24 as a whole: broadcasting what has remained unseen as interventions into the fabric and ways of Arnhem.

Being quirky in its discursive pronunciation, the Sonsbeek perennial managed to fly relatively under the radar over the years. It was the Jakarta based artistic collective Ruangrupa who brought the event back to international awareness and set the exhibition (which predates Documenta with its first edition) on its recurring cycle. The current expanded edition, undertitled Force Times Distance: On Labour and its Sonic Ecologies, is curated by Antonia Alampi, Amal Alhaag, Zippora Elders and Aude Christel Mgba, together with Ndikung as its artistic director. It spans between the years 2020-2024 and is operating on countless levels and frequencies, including many publications and a rich public program. It calls for a slow, deep listening process that diverts from the fly-in-fly-out-international-art-experience and suggests an alternative model for such mega-exhibitions, by focusing on a prolonged duration for an exhibition that is enjoyed at best by walking slowly. 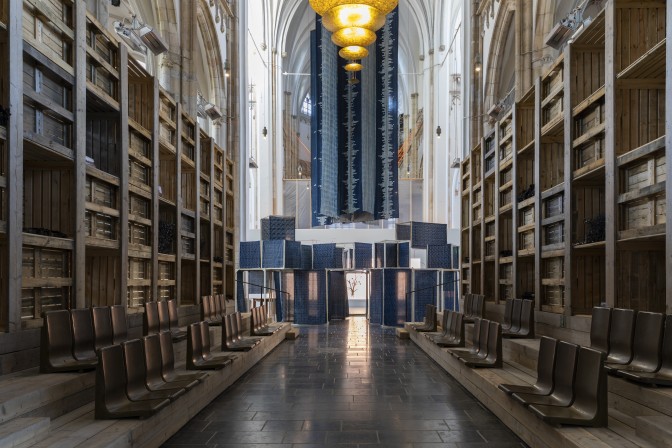 In the nave of the Eusebiuskerk, a 15th-century gothic church in the centre of Arnhem, Ibrahim Mahama uses material from railway corporations in post-independence Ghana to construct a large, two-sided wooden structure. The Parliament of Ghosts (2019/2021) functions as a place of gathering, like many of the artworks commissioned for this event. The symposium "Sea as History" opened the public program. Traveling without moving on the reused train chairs, the nave of the church was transformed into the boat it was designed to be. The boat is a folding of the sea. [1] The person on board is “a prisoner in the midst of what is the freest, the openest of routes: bound fast at the infinite crossroads.” [2] Around, the ocean is unfolding. The Atlantic Ocean, in this case, and this ship is a womb-abyss, the cramped doorway of the Slave Trade, that “dissolves you, precipitates you into a nonworld from which you cry out.” [3] Beneath, the depth of the sea. Where balls and chains go green. The tunes of Drexciya’s Deep Sea Dwellers, the electronic music duo who imagined the afterlife of infants born underwater to pregnant slaves that were cast overboard, were summoned by DJ Lynnée Denise. A reminder that techno music so beloved in Europe was born out of the working-class Black community of Detroit. Later, OTION, an Amsterdam-based singer, songwriter, and spoken-word artist took the stage. Performing his piece I'm not Black, I'm Deep accompanied by a loop-station, OTION sculpted a live multilayered soundscape from waves
of words and beats:

I’m not BLACK I’m deep
It's like when you close your eyes
and enter deep sleep
and the black behind your eyelids
becomes the landscape
where you created your dreams
I CREATED YOUR DREAMS!

Many of the commissioned works in Sonsbeek 20-24 follow the principles of excavation, amplification and intervention. Digging into the local history, the story of Black Anne, a carpet knotter who was brought from the Vossenberg plantation in Surinam in 1727 to work in Zypendaal Castle, was uncovered. Little is known about her besides her arrival date in Arnhem and a single receipt for medical treatment. In Farkhondeh Shahroudi's Performative Poetics of Matter (2021), a series of red “anti-flags” were installed next to that same castle. Hand-stitched with words in German, English, and Farsi, the flags form a dialogue between the artist and Black Anne. The installation also includes a large, round, carpeted structure, which is placed amongst the flags. 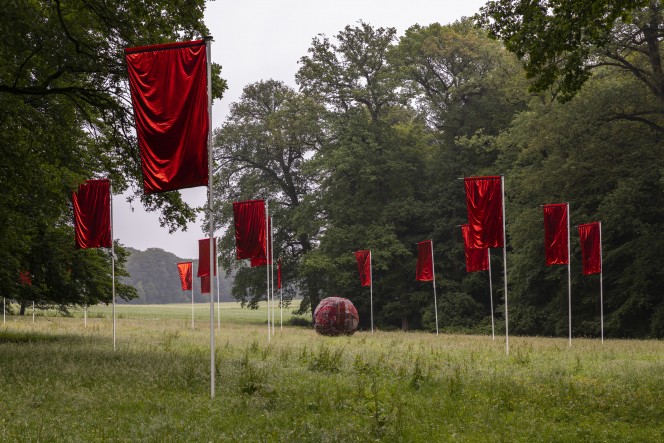 In Textiles of Resistance: Growing, Weaving, Printing, Archiving (2021), the Amsterdam-based Werker Collective transformed parts of their labour-related archive onto natural linen using plant-based pigments. Swinging in the wind, these archival-textiles seem like dirty laundry left out for all to see. The conceptual framing of labour makes the viewer sensitive to the multilayered efforts needed to produce each object or installation. By emphasising the work of the artwork, the focus also shifts to hidden and historical labour. 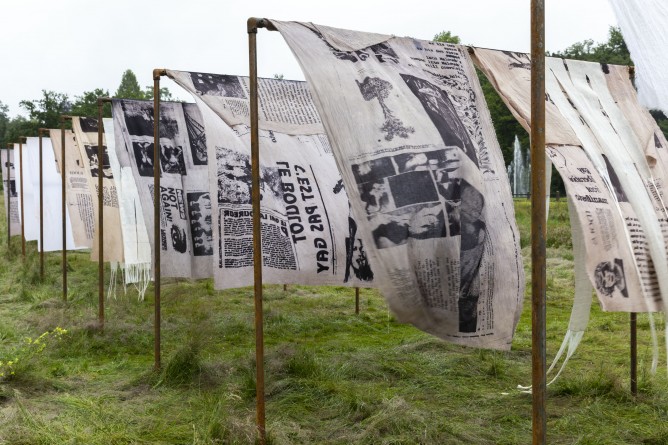 With Third permutation: "how-long-and-how-hard-and-how-far" (2021) Leo Asemota presents a dual meditation on the flow and rhythm of time. Two wall clocks hang next to each other, spinning each on its own accord, reminiscent of Felix Gonzalez-Torres’ iconic piece Untitled (Perfect Lovers), 1991. Installed above the front desk of the Kröller-Müller Museum, the work is charged with another layer of critic: in an establishment where employees punch the clock, clock-in and clock-out, work around the clock or against it, Asemota’s clocks remind us that the clock’s vulgar measurement function has more to do with labour than with the conception or sensation of time itself. 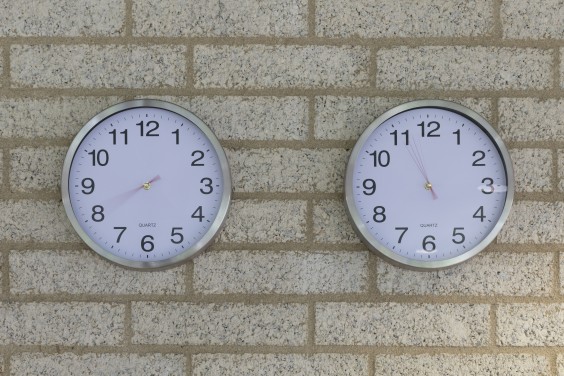 Built by the Germans during the war, an ammunition hangar in the outskirts of the city was designed to look like a farmhouse. Sunette L. Viljoen opened its two facing doors and laid the floor with bricks. The herringbone pattern creates a pathway that re-articulates the building as a gate or a passage. As if left open to ‘air it out' Viljoen's gesture gently directs one’s attention to the vacant building itself, reminding of Christian Boltanski's The Missing House. Named HOC OPUS HIC (2021), Latin for ‘this is the task’, Viljoen's sculptural intervention is a task of memory. Notably, piles of unlaid bricks are placed next to still-barren parts of the floor: a reminder that, like a prayer, remembering is an active task that has no moment of completion. It’s a practice, a repetition. 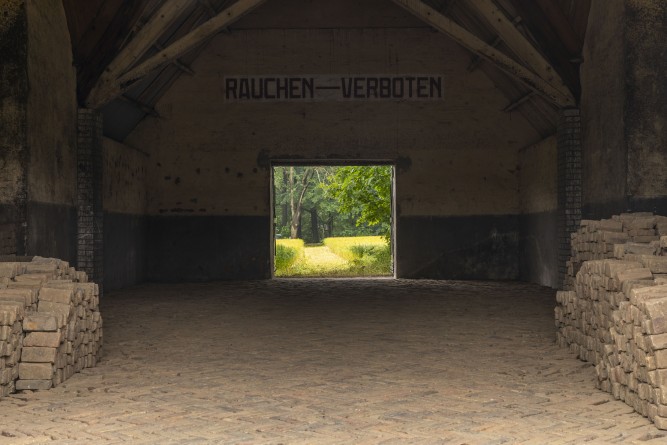 Willem de Rooij’s Pierre Verger in Suriname (2020) also deals with the amplification of memory. Photographs taken by Verger during a trip to Suriname in 1948 are projected with intervals on a reflective surface: a spy mirror with a specific kind of coating. In the intervals, the image disappears and the viewer’s reflection appears. The grey-tone reflection of the viewer sitting on a bench resembles an interrogation room of some sort, highlighting the connection between photography and testimony and staging the viewer as a witness. The constant intervals of transparency and opaqueness interweave the images of the past with the present moment as if inserting them into our self-image (or, vice versa). Shown for the first time in the Netherlands, De Rooij’s gesture of bringing these images forth into light follows the excavation/amplification model and makes the realisation of a cross Atlantic entanglement inescapable. Emphasising the fleeting quality of memory, the constantly disappearing/reappearing images call upon the viewer to actively take on the work of remembrance, whenever the connecting line is fading and the mirror turns opaque. 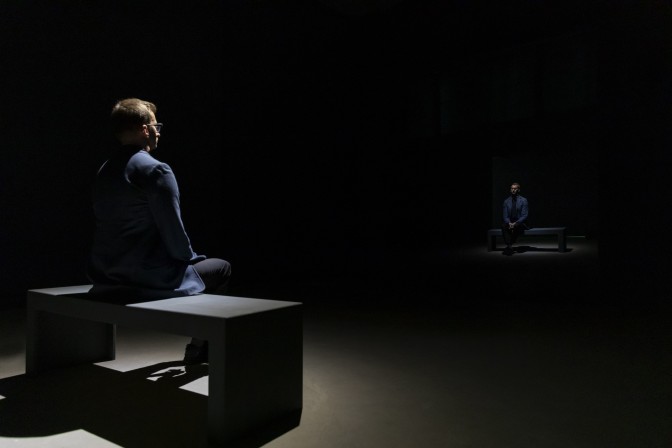 Sonsbeek 20-24, Force Times Distance: On Labour and its Sonic Ecologies, is an overwhelmingly moving manifestation. The framework of excavation, amplification, and intervention encourages site- and context-specific works, opening up a space in which art dives deep and reemerges by cracking the surface of things, provoking a caesura in a seemingly continuous flow. Following the teachings of Pauline Oliveros, attentive listening slowly reveals the work behind the work, the many entangled connections in the histories of objects and thoughts, and the ghosts of the past in the midst of the present, whose presence holds our world together.

"We cry our cry of poetry", writes Glissant. "Our boats are open, and we sail them for everyone."[4]

Sonsbeek 20-24, Force Times Distance: On Labour and its Sonic Ecologies. Main Exhibition / 2 July - 29 August 2021 / Arnhem, the Netherlands. The exhibition in the parks and indoor locations is free of charge. More on: https://www.sonsbeek20-24.org