REVIEW: WHEN ORDER IS ACTUALLY CHAOS

How Democracia’s situationist interventions at the Biennale Warszawa intersect with protests and activism in the 21st Century.

An artwork is a heterogeneous montage of temporal qualities. It carries traces of images conceived before it was created as well as those that came after its emergence, distorting the chain of cause and effect, spoiling the linear ideal of history. These “anachronistic properties'' of artworks, as Georges Didi-Hubermann says, are seen through the viewer’s unique lens and filtered through one’s past experience, as well as their hopes and fears about the future. The same image, seen by different people, sometimes bears mutually-exclusive meanings and associations that change over time. But anachronistic characteristics do not only manifest themselves in artworks they also culminate in very concrete ways such as in the abuse of authority by law enforcement. It happened everywhere in 2020, the movements in the US and France being the most evident examples of collective action taken against distinct forms of police brutality and structural violence. It also happened, to recall Alfred Jarry’s famous opening of King Ubu (Ubu Roi, 1896): “nowhere - that is to say in Poland.”

In July 2020 an ominous and monumental image of a heavily armoured policeman appeared on LED screens in one of Warsaw’s main underground stations. The luminous displays, usually used to advertise the city’s cultural offers, were deployed (in a gesture resembling a situationist détournement) to remind the passersby of the constant surveillance they are being subjected to. The officer shown in black and white, his gaze serious and persistent, holds one finger to his mouth in a silencing gesture. Later this year, with the emergence of the protests in relation to a severe breach of women’s rights, it became obvious that the order to remain silent concerned not only the present but the future as well. Images travel between different political realms: Silence (2018 – 2020), the artwork displayed in Warsaw’s city center, has already been shown in urban settings in Brussels and Charleroi. During the summer of 2020, the image was a harbinger of Democracia’s presence in Poland.

Democracia, an artistic collective founded by Pablo España and Iván López in 2006, resurfaced in Warsaw in the fall of this year with “We Protect You From Yourselves”, a monographic survey of the group's recent works. The exhibition, part of Biennale Warszawa, was jointly organised and curated by a/political, a London-based organisation focused on the investigation of current social and civic issues through art practice. The cycle of works, which lent its title to the entire show, consists of a set of large-scale photographs of police officers who took part in the 2012 demonstrations in Madrid. Although taken at a specific time and place the images do not disclose any characteristics of the date or location. The menacing and somber portraits of policemen are paired with excerpts from a text by Luis Navarro, a philosopher involved in actualising the heritage of the Situationist International and former member of the police force. Slim, white letters form brief, haunting phrases such as IT’S EITHER US OR CHAOS, WE ARE THE RULE OF LAW, YOU WOULDN’T KNOW HOW TO LIVE BUT AGAINST US. The use of aesthetics typical of commercial advertising gives these representations of power an almost elegant, sublime appearance - another example of Democracia’s deployment of situationist methods allowing the artists to demystify and subvert the spectacle of power. Another work titled 18 Portraits (2014), an array of close-up shots of policemen’s faces arranged in a monumental mosaic is another case in point. As the successive photographs become darker, the uniforms worn by the officers become increasingly voluminous, to a point when they obscure the human underneath.

Seemingly objective, impartial aesthetics are tools often used by both propaganda and advertising. The collective’s critical stance towards this strategy is voiced in the online documentary accompanying the show: “We understand art as a communicative action. We see art as a tool to make propaganda; specifically propaganda against institutional propaganda”. This statement by Democracia sounds alarming in the context of Poland’s communist past and strikes an even more unsettling note in the framework of the country’s authoritarian present. The distrust towards state-owned media has recently reached new levels, with the ruling right-wing government generating parallel realities through TV broadcasting. 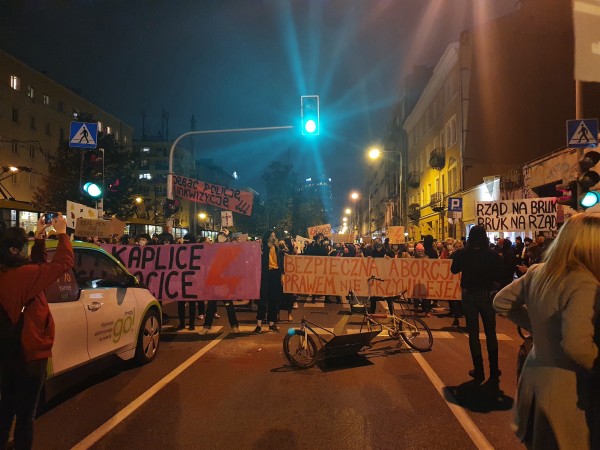 While the ground floor was dedicated to the images of power, on the upper floor, the subjects of power are at the heart of the narrative. The centrepiece of this section, Jeremiah (2018), is a stack of picket signs with quotes from poets and activists. They reappear as attributes in an assembly of photographs of Houston’s Members of the Huey P. Newton Gun Club: each of the protagonists of the series, consisting of 22 large format prints, holds a picket sign. A frieze of statements on the placards such as ARM THE HOMELESS, WE ARE NOT AFRAID OF THE RUINS, WHO IS 666?, DESTRUCTION IS CREATION, and GOVERNMENT IS DEATH reads as an uncanny, violent poem. Like two sides of a coin, interpreting art and consuming information are the two threads that run through the exhibition. The line between art and information is further blurred in an analytical work prepared by guest contributors the Syrena Collective. A Brief History of Violence (1989 - 2020) (2020), a board covered with xeroxes, notes and graphs, gathers research on the expenses on state security and the increasingly numerous abuses of power by its officers. The final chapter of this investigation, ominously titled TBC, follows incidents of the passing year and precedes a short but dense chronicle of events that took place in the country after the official opening of the show.

Props and portraits, words and humans come together in the first of three acts of ORDER (2018). A video work borrowing from opera aesthetics (often perceived as a medium marked by class politics and economic inaccessibility), ORDER is the most complex of the pieces exhibited. The video’s colours, eerie settings, juxtaposition of sounds and the clashes of high and low induce dreamlike associations. In this way, social class - the work’s main subject - is questioned in an indirect, almost surrealist fashion. ORDER culminates in a manifestation of power of the oppressed: “Your order is the chaos. Upon this chaos I will build my house” - exclaims the heroine of the final act.

In “We Protect You From Yourselves” the past collides with the present. Images taken a few years ago might as well be taken in a different temporal and urban setting. Though their dispassionate aesthetics and lack of visual site-specificity, they are still relevant today, welcoming the viewers’ readings. On October 22nd, the day before the official opening of the exhibition and in the midst of the COVID-19 pandemic, “Poland’s constitutional court ruled to ban abortions in cases of congenital fetal defects, even if the fetus has no chance of survival. The decision by the court’s 15 pro-ruling party judges, many of them appointed unlawfully, would allow terminations only in instances of rape, incest and when the mother’s life is at risk – a tiny fraction of cases. Women’s groups estimate that an additional 200,000 Polish women have abortions either illegally or abroad each year – Poland has some of Europe’s strictest abortion laws.”

This unjust and cynical ruling, a tragic and wrongful sentence for all Polish women, sparked a series of nationwide protests which continue to this day (the largest of the demonstrations to date, gathered more than 100,000 people in Warsaw alone). The massive, nationwide movement, organised by the grassroots feminist organisation “Women’s Strike” (“Strajk Kobiet”) took many forms, including blocking city streets, impromptu raves, spraypainting the walls of state buildings and (since the “Women’s Strike” calls not only for women’s reproductive rights but also for breaking the unholy state-church union) churches, and disturbing the Holy Mass.These gatherings, often described as the largest protests since the fall of Communism in 1989, mobilized not only supporters of women’s rights but all those unsatisfied with the fifth consecutive year of rule of the far-right “Law and Justice” (“Prawo i Sprawiedliwość”) party. “‘I just spoke to a young woman who told me that she is 24, and that she has done nothing for the last six days except protest’, Maja Wójcikowska, one of the protest’s organisers, told broadcaster TVN. "There is an incredible energy, we are not going to waste it.’” 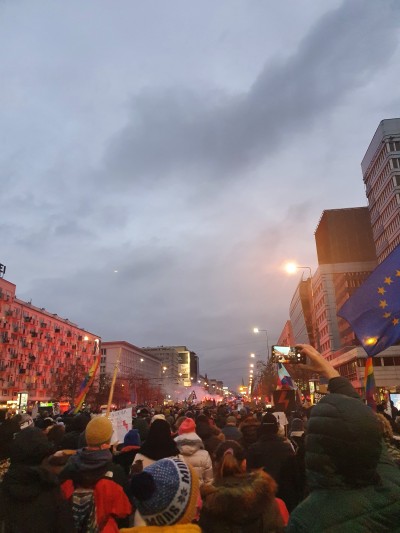 The very beginnings of the protests carried a lot of vigour and intensity, sometimes an even joyful atmosphere. The mood has changed drastically since the first cases of police violence targeted at protesters. News of unlawful arrests, beatings and the use of tear gas sweep through social media channels after each demonstration - and yet they continue as visible, viral proofs of perseverance and determination. The gesture performed by the main protagonist of Democracia’s Silence seems not only ominous, but prophetic and all too familiar. The menace of an anonymous policeman haunting the corridors of Warsaw’s underground has reappeared, but this time among the protesters on the streets of the Polish capital.