What can Alfred Gell's anthropology of art tell us about (the persistent fiction of) possessive individualism?

What happens if we think of art objects as things that are not only embedded in social relationships, but are themselves social relationships? What if all art objects are meant to fulfill a specific role? This is the main premise of Alfred Gell’s well-known, yet under-read study Art and Agency (1998), in which the author sets out to develop what he calls the anthropology of art: a discipline that sees art as a charged nexus onto which communal relations are imprinted, where artworks are turned into a “by-product of the mediation of social life,” (1) but also where agency emanating from artworks in turn generates new social connections. Writing about a manifold of mostly non-Western populations, Gell argues for the conception of art as a medium through which people 'manifest and realize' their intentions, not in a metaphorical way, but as an actual causal relation in the world: “I view art as a system of action, intended to change the world, rather than encode symbolic propositions about it.” (2) For example, when malangan, the memorial carvings produced in northern New Ireland (Niu Ailan), fulfil their ritual role in a funerary rite, their objecthood ceases to matter - they can literally be discarded. Malangan carvings exist as socially useful objects only for a limited period, during the mortuary ceremonies for important members of the community. Functioning as material extensions of the deceased person, the aim of the carvings is to produce an internalized memory of their own image in the heads of the ritual participants: the person that dies therefore reproduces themselves in form of a cognitive visual imprint in the younger generation and artwork is an indispensable part of this procedure. In Gell’s theory, objects thus become prosthetics of the people whose agency they express, or in his words, part of their 'distributed personhood’: “Ancestral shrines, tombs, memorials, ossuaries, sacred sites, etc. all have to do with the extension of personhood beyond the confines of biological life via indexes distributed in the milieu.” (3)

To appreciate the full weight of this loaded argument, one would need to turn to the—overly schematic, but perhaps sufficient for the purposes of this text—art historical claim that the invention of the artist as an individual figure dates back to the Renaissance and is inextricably linked to newly-developed trade relations and capitalist accumulation of profit. In his book Painting and Experience in 15th Century Italy (1972), Michael Baxandall observes how the individually recognizable artistic techniques became the primary sought-after feature of an artwork, substituting the primacy of formal pictorial elements: “As the conspicuous consumption of gold and ultramarine became less important in the contracts, its place was filled by references to an equally conspicuous consumption of something else - skill.” (4) In the 1490s, payment thus became relative to “an increasingly articulate sense of the artists' individuality.” From then on, the artist is considered the sole author and proprietor of his [sic] work. Despite this being only a useful fiction, continuously dispelled by the crucial contributions of under-acknowledged assistants, feminised affective labor and non-Western “influences,” the figure of the individual maker up to this day reigns as the status quo of the Western regime of aesthetics. (5) Why this detour into the history of artist-as-individual? Because despite the fact that art history is full of examples where artworks are indeed seen as a repository of a collective zeitgeist—either as the product of relations of production (Baxandall) or as the expression of a distinct formal characteristic (Heinrich Wölfflin)—one essential aspect remains the partitioning of the artwork and the artist into two discrete, individualised entities, to which a broader historical meaning can be ascribed. 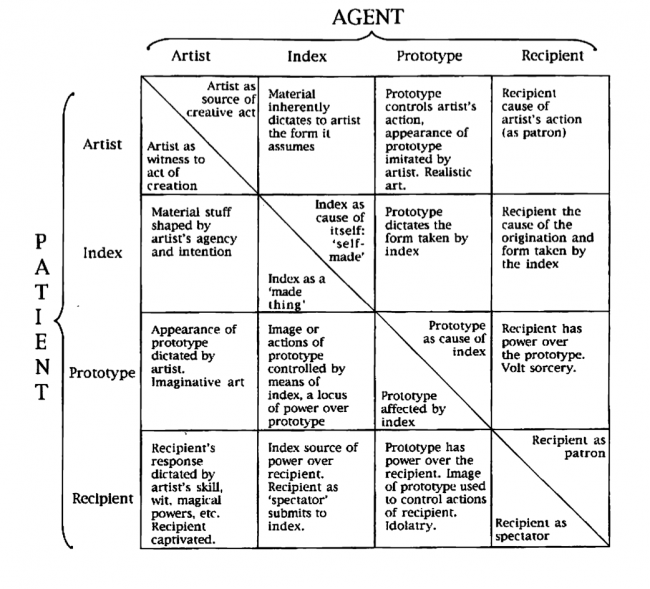 It is in the notion of agency that Gell finds a solution to this myopic vision of art: “Persons are always the primary agents, but artworks and other inanimate objects can be agents in an indirect sense, for although they themselves are not intentional beings they frequently act [as catalysts for social relations].” (6) Agency is here not presented in relation to "vibrant matter" (Jane Bennett) that would animate the object with a vitalist force, as it is sometimes argued by certain strains of new materialism. On the contrary: agency becomes a function of a collectively selected object, performing a specific social role. Most importantly, agency is able to harness the contingency of the universe and turn it into a desired effect with felt consequences in everyday life.

This is diametrically opposed to the conception of art as a materialisation of an idea stemming from a determined (even if multiplied) subject position: instead, artworks are a manifestation of collective social relations and the object, the maker and the intended audience interpenetrate each other. Artworks are a key part of a wider cosmology that preserves a functional relation to the actual social environment and are not relegated to seemingly self-sufficient institutions. Away from dubious attempts (see: relational aesthetics) to transform art into a tabula rasa for networking, in Gell’s theory we encounter societies in which the 'institutions' which provide the context for the production and circulation of art, are not specialised art institutions at all. They are institutions in a broader, more capacious sense, such as indigenous communities, labor practices, exchange systems and biological, as well as non-biological kinships. Works of art only sometimes serve as objects of aesthetic appreciation, but not necessarily so: “A further aesthetic properties can be assessed only in terms of the intended effect of an art object in its context of use.” [emphasis mine] Reified Western aesthetic categories break down: individual(ised) expression, independent maker, symbolic meaning, inanimate object (7), art’s uselessness.

All this is not to romanticise Gell’s theory as necessarily emancipatory, or to claim that it reveals the presumably "real" social relations behind an artwork. It is also not to say that one has to look to non-Western practices in order to fix colonialism’s bugs (another important question would be, of course, to what extent can the discipline of anthropology be detached from its historical task of “production of alterity”). It is rather to say that in order to release the artwork from its vaunted halls of modernity/coloniality (Aníbal Quijano), we might need to realise that the teleological formula "maker + creative act = outcome" is only one specific alternative in a plethora of different ontologies. 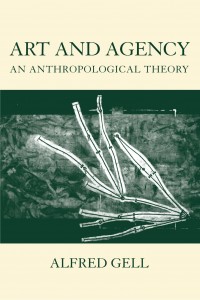 Art and Agency: An Anthropological Theory by Alfred Gell