THERE REALLY IS SOMETHING WRONG WITH ARCHITECTURE

A grumpy review of the 17th Venice Architecture Biennale.

Strong-armed by peer pressure, I book last-minute tickets to Venice. I find a cheap place on Kilburn High Road to have my tonsils and nostrils inspected. A couple of days later I end my pandemic sedentary spell and touch down at Marco Polo. I have high expectations of a reasonably calm few days. Fewer people than usual, more time to luxuriate in the company of bumped-into friends and no need to rush around with the ordinary frantic desperation. I hitch a ride on someone’s water taxi and arrive at Hotel Danieli (where I am not staying). I make my way to my nice little room in Cannaregio and cower there for a while before venturing out to explore what I fear will be a distressingly opaque festival of nothingness.

Biennale themes are almost always wantonly vapid, but this one is particularly nasty: “How Can We Live Together?” sounds like the post-colon part of the tentative name of a university internal small grants programme. It is explained to clueless not-architect me that the Director of the 17th Architecture Biennale is indeed a university administrator, the Dean of the MIT School of Architecture. What follows is a short account of my Venetian perambulations, with a disproportionate emphasis on East European and/or post-socialist exhibits, among them: Hungary’s “Othernity”, Russia’s construction site, Uzbekistan’s Mahalla, a hymn to Montenegro’s Svetlana Kana-Radevic.

I emerge from my lair and put on my mask. I meet my travelling companion Markus Lähteenmäki and we hobble past the 16th century Santa Maria del Derelitti, where we stumble upon the Lithuanian pavilion, one of many national exhibits peppered around the city. It’s called “Planet of the People”, which is difficult to decipher as the name is rendered in a purpose-created typeface which looks really cool but is unreadable. It’s a dark and mildly mischievous fantasy about what would happen if Lithuania had its own space agency. The idea is that, instead of pillaging other worlds, the Lithuanians would catapult humans and their trash into space and make a kind of gruesome composite planet out of it all. There is a complex 3D scanner setup enacting this act of catapulting for each visitor, which is enjoyable. In the middle of the church I encounter a shiny circular pedestal with a surface made out of various recycled materials which reminds me of a marbled brain. On it rest some other objects made by the artist Juljonas Urbonas. Other gadgets of various kinds are also carefully scattered throughout the church and the whole pavilion is cute and intelligent, less pompous and funnier but not dissimilar – in its oeuvre-gathering satirical earnestness – to other post-socialist neo-cosmic art of the Arseny Zhilyaev kind. Unfortunately the tote bags cost €62. 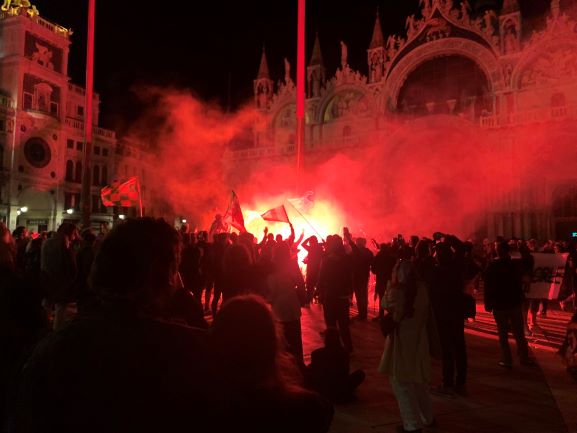 Many of the pavilions seem to have ambiguous titles, which sound like novels longlisted for the Booker Prize. The British pavilion is called “The Garden of Privatised Delights”. It is constituted by several discrete rooms, each curated by a different individual or collective, dealing with various facets of the creeping privatisation of the UK’s sites of leisure and publicness. The most memorable among them is a touching monument to the ailing institution of the British pub created by The Decorators. The Polish pavilion, called “Trouble in Paradise”, draws attention in a fashionably Koolhaasian manner to the existence of the Polish countryside. There is a nice photograph of a bleak-but alluring field, ravaged by wild capitalism, printed onto a fantastically over-sized shower curtain wrapped around the edge of the entire pavilion.

The name of the Hungarian pavilion is also paradoxical but shorter: “Othernity” (incidentally, the Kosovar pavilion is called “Containporary”). The curators have adopted an encyclopaedic-maximalist approach, assembling a typology of various objects, textures and surfaces characteristic of post-socialist Eastern Europe. The concept behind the exhibition is complex without being convoluted, but boils down – as I understood it – to selecting twelve buildings in Hungary and inviting twelve architectural practices from various post-socialist countries to congeal an aspect of each of these buildings into a sort of quasi-sculptural object. Convoluted-or-not, the idea seems to work and the whole show reads like a typological sculpture park of post-socialist architectural specificity. It’s all quite transparently anti-Orbanist; and – like many of the best shows – completely and utterly ignores the Biennale’s vacuous theme.

It’s the Hungarian pavilion’s element of specificity that the Russian pavilion lacks. As a result of various interventions and acts of manoeuvring, control over the commissioning process for the curatorial concept has finally been wrested out of the clammy patriarchal claws of power-adjacent St. Petersburg mover and shaker Semyon Mikhailovsky. Instead, it has been taken over by the extremely trendy and somewhat less patriarchal (but no-less power-adjacent) VAC Foundation, who have gone through a great deal of effort to excise the century-old stench of macho dinosaurism from Shchusev’s extraordinary building by actually reconstructing the whole thing from the inside, with the intention of revealing the windows and more “open” (such is the name of the pavilion) characteristics of the original structure, concealed by decades of incremental alterations. Outside the Russian pavilion a group of four young boys in smart suits make bunting in the colours of the Russian flag. They are standing next to a pot of paint and some construction detritus. Sadly, they are not part of a conceptual art installation or an actionist intervention – it’s just that the pavilion hasn’t been finished yet. - The pavilion is being subjected to a process of infrastructural-aesthetic modernisation and prettification – the Russian word for this is blagoustroistvo. This a process which the entirety of Russia has been undergoing for the past decade or so, with uneven, complex, sometimes gratifying and often disturbing effects. Perhaps blagoustroistvo itself would not be a bad theme for a future Russian pavilion, suggests Markus. I concur. 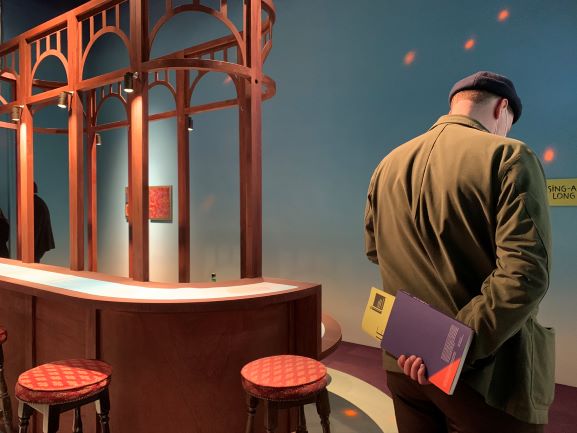 Markus Lähteenmäki in the British Pavilion.

is mostly dreadful. Earnest infographics with terrible typography. Renderings of renderings of renderings. Loud noises of natural phenomena. Greenwashed faux-forest disingenuous eco-nonsense flown from across the ocean. Unreflective apocalyptic ecologism is the new locker-room banter. It’s everywhere. Markus has to go outside but I stick it out for purposes of ethnographic rigour and masochism. There really is something wrong with architecture. I know everyone asks themselves this question all the time, but why are architectural exhibition aesthetics so brainless, over-boiled and depressing? Presumably it’s because of an ever-intensifying absence of ideology; but perhaps also because computers are still too dumb to think aesthetically and ideologically. By the time the technology is there for them to do so it will be too late because humans will have had the aesthetics and the ideology trained out of them by the still-dumb generation of computers.

Among the more interesting things at the Arsenale (I am sure there are many more that I missed) is the first-ever Uzbekistan pavilion, consisting of enormous yellow Soviet-esque scaffolding with photographs of and exhibits relating to disintegrating mahallas (self-governing city districts well-established in the urban morphology of Central Asia) hanging from them. The Chilean pavilion is wonderful and haunting, a comic-book iconostasis, housed inside an electric blue wooden box, of thumbnail paintings depicting everyday life in the Jose Mario Caro social housing settlement south of Santiago. The architecture in both of these pavilions is present, but it is not shoved down your throat in the form of an infographic or degree show-esque little model.

Another reminder that architecture does not have to be exhibited in the deathful manner of a developers’ booth-cum-degree show – and one of this Biennale’s few forays into architectural history – is provided in the exhibition devoted to the phenomenal Montenegrin architect Svetlana Kana Radević. One of the few women to rise to prominence in the Yugoslav architecture world, Kana built prolifically, grandiosely and beautifully: a Babel-connoting Architekton-esque brutalist tower hotel in Užice; a pebbledash stepped-terrace paradisiacal hotel in Podgorica; anti-fascist memorials; bus stations, more hotels, a lexicographic institute, a kindergarten. Despite a global reputation and education, and the patronage of Louis Kahn and Kisho Kurokawa, she chose to locate her practice in Montenegro. As the Venice show – intelligently, painstakingly and playfully curated by Anna Kats and Dijana Vucinić – demonstrates, Kana was also skilled in various seditious arts, among them (self-)photography, letter-writing and public speaking. The wall texts are funny and instructive and the tote bags – from which Kana’s visage beams commandingly but non-linearly – are the best in town. Go to Palazzo Palumbo Fosati before they run out. 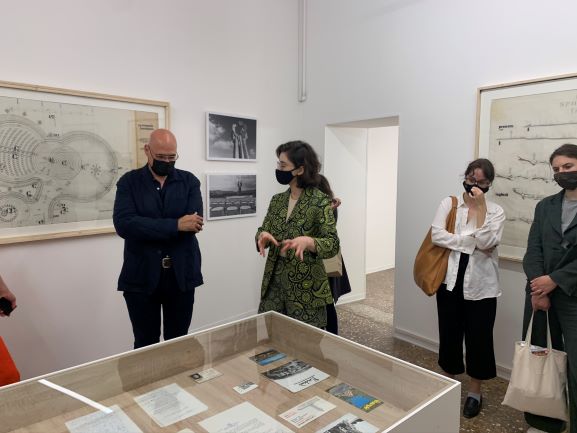 Curator Anna Kats at the exhibition "Skirting the Center: Svetlana Kana Radević on the Periphery of Postwar Architecture”.

Before I escaped Venice for the almost-post-socialist joys of Trieste, I managed a whirlwind tour around the Peter Fischli-curated “Stop Painting” show at the Fondazione Prada. It’s wonderful. A paint-splattered Pistoletto worksuit displayed next to a patchwork of paint stains by Jean-Frédéric Schnyder, laid beneath the baroque frescos in the ballroom of the Piano Nobile. The colours match, as if the paint had fallen off the ceiling. Quirky Kurt Schwitters still-lifes. Bumpy baroque plaster walls with little cornices taking the piss out of white cubes. All this has nothing to do with architecture (OK, there is a doll’s house model of the whole show in the foyer) and is impressive and exhilarating after the deadening didacticism of the Arsenale. At the same time, this very quality serves as a vivid and unsettling reminder of the canon-creating and network-building might that the status of old white man bestows on you in the long 20th century. Forgotten and/or offbeat works by famous old/dead white men in every room.

There is also a very nice place of respite in the gardens of the monastery in San Giorgio Maggiore, installed by a foundation established by a personable Qatari ex-diplomat. There are huge impressive roosters and rows of herbs and vegetables and a big bamboo Majlis – a gathering place – in the middle designed by Colombian architects Stefana Simić and Simón Vélez. The scale is impressive, the atmosphere is eccentric and it serves as a reminder that you can curate ecology and/or “sustainability” – you can even speak to the Biennale’s theme of noncommittal togetherness – without descending into infantile apocalypticism and/or disingenuous sanctimonious faux-hippiness (Denmark).

I am surprised by the fact that there is almost nothing about Covid or plagues anywhere. I had to go to the Scuola Grande Di San Rocco to see some (dated) plague architecture/art. But then again, that’s because most of the exhibitions are recycled from the postponed 2020 Biennale. I suppose it’s to everyone’s credit that they did not try to shoehorn Corona into their pavilions.