In Russia, the development of the outbreak of the coronavirus pandemic overlapped with another depressive episode: the state authority initiated the process of rewriting the constitution in order to provide acting head of state Vladimir Putin, who has held power for the last twenty years, with a life-long presidency. In 1917, the October Socialist Revolution overturned monarchy, and now the rulers of the state are trying to restore it. In order to modify the constitution, a national referendum was needed. The rulers hurried up the process; they even recalled strict quarantine measures in spite of the growing number of people infected with COVID-19 and the lack of beds in hospitals for new patients. Most people knew that this vote was a pseudo vote with the results fixed well in advance. The electoral system in Russia is utterly broken: regardless of how many citizens come out and vote, the results are always falsified and there is no way to prevent this. Many people nevertheless risked their health and safety during the pandemic, put on their face masks and gloves, and went to the voting station in order to say “no” to the everlasting Putin and his gang.

Shortly before the referendum on June 27, many activists organized an action in support of a political prisoner, a young artist named Yulia Tsvetkova from Komsomolsk-on-Amur in the Russian Far East. Yulia’s case was a show trial based on fabricated information: she was accused of pornography and homosexual propaganda. Now the artist is facing years of jail time for educational, body-positive drawings and cartoons, among which was an allegorical image of a vagina. Over thirty people, mostly women, were arrested for supporting Yulia. Did the protesters do anything illegal? No. The only form of protest in Russia is a one-person-picket, and that’s what people always do: they come to a place, keep distance, and silently queue on a picket. What they were charged with this time, according to the protocol, was the non-observance of sanitary norms, the disruption of self isolation. Here comes the quarantine! The girls were rounded up, stuffed together in a tiny prison truck, brought to the police station, and kept there for many hours or even days. 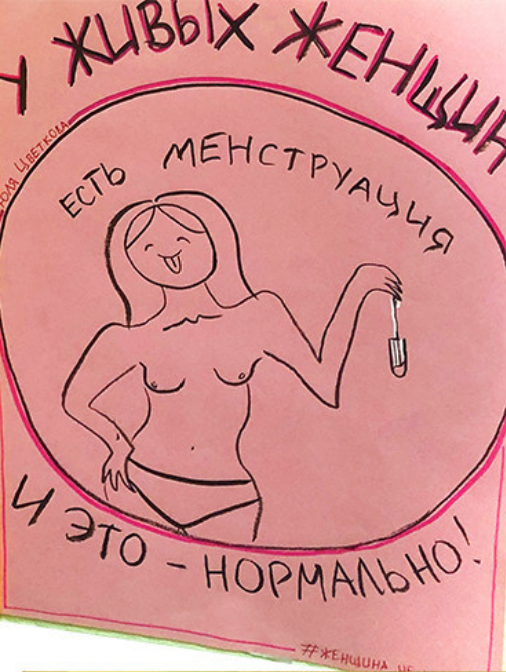 "In reality things never really stay separate, next to each other and within fixed borders, but are constantly colliding. Life is ultimately a kind of contagion—love and politics, too."

This case shows what, for the police, really constitutes sanitary norms. It’s not COVID that they are trying to prevent. The contagion for them is us. The protests are contagious. The slogans are contagious. The drawings are contagious, indeed. What is especially contagious—a real danger, a nightmare of those in power—is that wonderful, flower-like, many-colored image where they managed to discern a vagina. A female body that differs from the one fabricated by the male gaze for the purposes of consumption is a taboo, as it was thousands of years ago. In contemporary Russia, the police and the entire state system go hard with the observance of this taboo.

Why is this so? Contemporary Russia is not only capitalist and authoritarian. It is, in the first instance, patriarchal. Thus, the second person in the state, after the president, is literally a patriarch, about whose wealth, greed, and cynicism even true believers are outraged. The president and the patriarch represent the so-called vertical of power held up by the police army. This army is huge, as well as the vertical by which it stands. However, our experience teaches us that there is one thing that they cannot tolerate, towards which they are not immunized: a vagina. My comrade Galina Rymbu recently wrote a great poem about this, in support of Yulia Tsvetkova. It’s a long poem, and I will only quote its concluding episode, where Galina ascribes political agency to her vagina:

I think, well, maybe the vagina will bring down this state for real,
drive out the illegitimate president,
disband the government,
abolish the army, taxes on the poor,
the FSB as a structure of utterly vile power and oppression,
deal with the police,
with conservatism and revanchism,
dismantle unjust trials, free
the political prisoners,
make putrid Russian nationalism impossible,
the humiliation of the oppressed, fabricated cases,
will fucking shatter oligarchy and patriarchy,
paralyze troops deployed in other states—
farther and farther:
crush militarism with the cunt! (1)

In Russian, “cunt” is the most obscene word, which means not only the female sexual organ but also something like death, a catastrophe, or the end of it all. Cuntocalypse is the right word too, as it gets at the pussy’s destructive potential, presenting itself as a reply to the stupidity of the vertical of power. We have another historical precedent: in 2012, girls from the art group Pussy Riot were sentenced to jail for organizing a punk prayer in Moscow’s Cathedral of Christ the Savior. A punk prayer gave us a perfect image: a group of anonymous girls in balaclavas against one personified dictator. “Mother of God, drive Putin away,” they sang in the church. 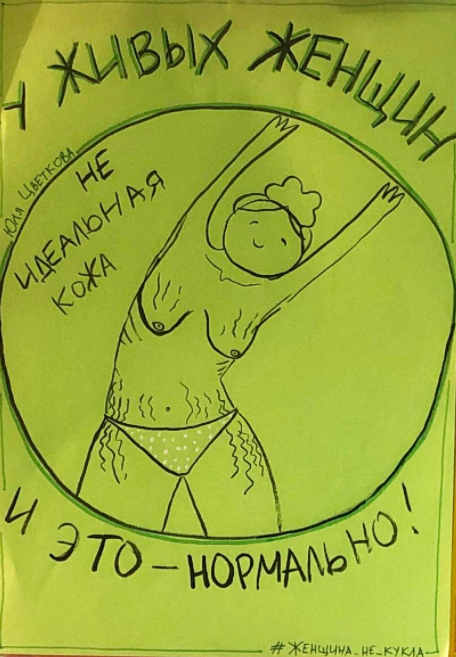 Yulia Tsvetkova,"Living Women Sometimes have Imperfect Skin: And it's Normal!", 2018

On July 1, the last day of the referendum, Putin too came to vote for himself. He didn’t wear a protective mask. When the journalists asked his spokesman Dmitry Peskov to comment on this, he replied that Putin fully trusted the sanitary conditions of the voting facilities. This was to say that our new-old president does not wear a mask because he isn’t afraid of getting infected. The reverse scenario—that he himself could infect someone—was out of the question. No, the president cannot be the source of infection. We are the source of infection. The voting facilities are good enough to protect him from us, an anonymous infectious crowd in masks.

On the same day, St. Petersburg’s authorities closed our beloved place of gathering and protests, the Field of Mars, officially “for the eradication of ticks” but in reality, for preventing protest activities. A representative of the local administration commented that there were “COVID ticks'' there. COVID ticks. Just think of it. Every summer Russians struggle with ixodid ticks, but this time is special. There is a triple danger for the one with no mask: the ticks, the virus, and the rest of us heading for the Field of Mars. A contagious interspecies assemblage.

On the one hand, there is an abstract idea of sterility, health, and hygiene, on the other, true life where all kinds of mixtures are possible. In reality things never really stay separate, next to each other and within fixed borders, but are constantly colliding. Life is ultimately a kind of contagion—love and politics, too. From the position of power, the danger that comes from the outside—from viruses and ticks, from aliens and migrants, from protesters and artists—must be eliminated. Each time, just think which side you are on. Nobody is guaranteed from being excluded from the territory of those who decide on what must or must not exist. As soon as you realize that you are on the other side, you can find yourself in interesting company, like a witch living in the woods talking to snakes. They want to put you in jail because they think that you are dangerous, you are a sort of virus—and yes, you are!

I immediately imagined myself a COVID tick. My fantasy was something similar to what Giorgio Agamben presents in his wonderful book The Open: Man and Animal, which I read many years ago, when I was young, and which greatly impressed me then. It contains a chapter titled “Tick”, where Agamben addresses Jakob von Uexküll’s careful description of this creature’s life and begins with an attempt to depict the tick “suspended in her bush on a nice summer day, immersed in the sunlight and surrounded on all sides by the colors and smells of wildflowers, by the buzzing of the bees and other insects, by the birds’ singing.”(2) Unfortunately, according to Uexküll, the tick “perceives absolutely none of it” (3) because her way of existence is such that she is the one with her environment. Based on these observations, Heidegger will make his argument that the animal is poor in the world, and cannot observe the world as such, cannot perceive flowers as flowers, bushes as bushes. Agamben, in his turn, refers to Uexküll’s famous experiment with a tick from the laboratory in Rostock that “was kept alive for eighteen years without nourishment, that is, in a condition of absolute isolation from its environment”(4) and notes that Uexküll cannot really explain this fact. If the tick does not perceive anything and only lives in a concrete unity with her environment, what keeps her alive for eighteen years without this environment? 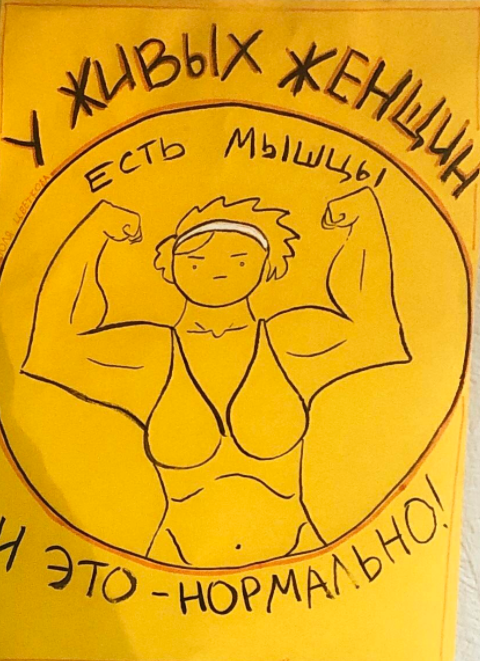 Yulia Tsvetkova,"Living Women have Muscles: And it's Normal!", 2018

For Agamben, the tick stands for what he calls bare life—a life that is neither human nor animal, neither really alive nor dead. It is deprived of a kind of symbolic determinacy, like the one that makes us human. Bare life is also a life that does not have a sacred value, in contrast to human life, culturally, historically, and politically biased. The tick is stuck beyond everything, in a kind of limbo or, as he says, a grey zone. A human being can become a bare life. This happens, for instance, in concentration camps, when prisoners are deprived of everything human, but also, as he suggests, during a pandemic, when we show our readiness to change everything human—like our traditional rituals of love, care, friendship, etc.—for mere survival. People do not bury their dead because they are afraid to get infected: this is already, according to Agamben, a nonhuman, bare life.

However, bare life is not only something negative. This concept is in fact ambiguous. On the one hand, we have these dehumanized self-sterilizing sanitary units—a bare life designed as cleanness and health; on the other, there is a tick that keeps her secret. What did she do there for eighteen years? Nothing. Her limbo might be a pure indeterminacy, which gives the tick a paradoxical power of spontaneous self-actualization. When I say: “we, COVID ticks,” I mean this indeterminacy: a tick is a bare life, a virus is a bare life, and we, too, coming to the voting station in protective masks, potentially spreading infection, taken by the police, tortured, humiliated, maybe even eradicated like ticks, are anonymous bare life in front of a sovereign with an open, clean-shaved face.

The Field of Mars is one of the most beautiful historical spots in St. Petersburg. It is a massive field, in the middle of which stands the Monument to the Fighters of the Revolution, constructed in 1917–1918, and the first eternal flame in Russia. The memorial and the field are surrounded by amazing lilac bushes, under which people usually lie on the grass in the summertime. We, the COVID ticks of July 1, 2020, sit on the branches of these lilacs. We wait.

‘We, COVID Ticks’ was first published in the reader of the 13th Gwangju Biennale "Stronger than Bone" and reprinted in the 14th issue of Arts of the Working Class "The Landlord is Coming".