WHERE PRIDE IS ALSO A BATTLEFIELD

How the student protests in Istanbul turned into a fight for LGBTQ+ rights through the arts.

The authoritarian regime of Turkish president Recep Tayyip Erdogan attacks everything that could potentially oppose it. It’s second hand news, yes, however, where oppression grows, inevitably resistance grows as well. In January, this resistance was cultivated inside the reputable Boğaziçi University, after Recep Tayyip Erdogan’s controversial appointment of Melih Bulu as rector.

Protestors have faced more than 700 detentions, excessive use of force by police, violations of rights and demonization, having exercised their lawful right to peacefully express their opposition to the appointment. Despite the heavy violence, a group of Bogazici University (BOUN) students added another form of protest to their arsenal to strengthen their fight: the BOUN Art Collective. The neighbours, students, artists and friends Hazar, Doğu, Selo and Sena thought it was the perfect time to organise and resist through their art practice. After making an open call to artists from all around the world, 400 artworks were successfully collected in 20 days.

“We were all neighbours and friends, creating art and studying at the same university’’, said Hazar, a tattoo artist and painter, and one of the founders of BOUN. “When police heavily attacked our peaceful protest in the very beginning and prevented people from entering the campus, we thought their works could be shown inside to show solidarity’’.

“First, we planned to show the artworks in secret locations’’, said Hazar. Exhibiting artworks at Bogazici University’s beautiful South Campus, overlooking the Bosphorus, the first day went well. Many students came to see the artworks which were hung from the trees and interspersed with performances. “We decided to leave 4 artworks in front of the rector’s office, so that Melih Bulu could see what people actually think of him’’, explained Hazar. Bulu’s appointment was criticized specifically because of his close alliance with Erdogan, as well as his role as a former ruling Justice and Development Party political candidate. Many students and academics have also accused him of plagiarism in regards to his PhD thesis.

When the BOUN Art Collective members returned to campus after the weekend, the four artworks that were left there had disappeared. The students realized that the security officers of the campus had been replaced whilst trying to find the artworks. On the third day of the exhibition, new artworks arrived. The ‘controversial’ piece, showing a picture of the Kaaba, the most sacred site in Islam, with the ancient mythological figure Shahmaran and four LGBTQ+ flags on its corners named “Yılanı Güldürseler”, meaning ‘To make the serpent laugh’, were placed alongside others to be exhibited. 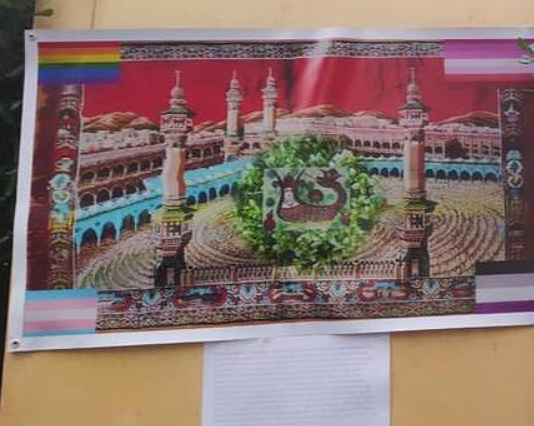 “After seeing Yılanı Güldürseler, some of our professors and students told us that it might cause a problem. They warned us saying ‘This piece will overshadow your protests’’’ said Hazar. BOUN Art Collective members had an emergency meeting to decide whether the piece should be shown or not. “‘Yılanı Güldürseler’, was an artwork from an anonymous author that we received after the open call. Considering the fact that it was just one piece among many, we decided to exhibit it without censorship. Even though it disturbed some people, in some ways, we are artists who stand clearly against censorship’’, said Hazar.

Some conservative students took photos of Yılanı Güldürseler and posted them on Twitter, claiming it was "an insult to Islam". They openly targeted the BOUN Art Collective members and a backlash campaign was started. Soon after, Turkey’s interior minister, Suleyman Soylu tweeted that ‘the government would not tolerate ‘’LGBT perverts who attempted to occupy the rector’s office.’’

Police presence around the university increased, as well as the violence. “You insolent people, look down!’’ shouted a Turkish police officer to the students of Bogazici University, before attacking them. They refused to look down, and hundreds of protestors were detained for offences including ‘displaying rainbow flags.’ Many of the students' houses were raided by the police in dawn raids, as a response to their peaceful opposition.

According to Human Rights Watch, “police conducted strip-searches and verbally abused and threatened the students in some cases.’’ Istanbul’s chief public prosecutor’s office demanded that 7 seven students, who had been detained over the artwork, be charged with “publicly provoking the public to hatred and hostility.’’ Hazar was one of those who had been detained and later sentenced to house arrest for a month. She described the time she had to spend at home unsurprisingly as ‘awful’, and continued, ‘“It was heavy to see the electronic tags on me when we wake up to news of femicide while the murderers are free in this country.”

Yet, this remains the situation in today’s Turkey.

According to Kadın Cinayetlerini Durduracağız Platformu (We Will Stop Femicide Platform), a Turkish NGO, in 2020, at least 300 women were murdered by men in the country. The government’s response to the femicide was withdrawal from the Istanbul Convention, which is the most comprehensive legal framework that exists to tackle gender-based violence.

“This is something involving terrorists. Those who joined the protests were not students. Melih Bulu was appointed to Bogazici University in line with laws’’, said President Erdogan in January. The president was given the authority to ‘appoint’ rectors in 2016 and he hasn’t hesitated to violate democtratic methods since then. The new rector of Bogazici University, was the first to be chosen from outside of the university since the military coup in 1980.

Legalizing anti-democratic strategies, while making democtratic rights such as freedom of speech or expression illegal, is a common method to strengthen the authority of state power in Turkey. President Erdogan openly condemns all the opponents as ‘terrorists.’

Another artwork was censored as the protests at Bogazici University marked their 100th day in April, under the newly appointed rector Melih Bulu’s administration. Breasts of a body figure in an abstract painting by Halil Ege Dogramaci, a Bogazici graduate, were covered in white paint. On the same day as the attack, the campus' rainbow coloured stairs were vandalized too. Thus, students had to face a new ‘Bogazici University’ of censorship, LGBTQ+phobia and oppression. Bulu has so far shut down the LGBTQ+ Club of the university and appointed new private security officers, who spy on students and report them to the police.

Hazar is very excited to be back on campus, having just returned  from vacation with friends. “We are planning to make guerilla exhibitions in parts of Istanbul’’, said Hazar, speaking  on the continuation of their  resistance through art. BOUN Art Collective publishes open-calls for artists with the motto: “We invite all art home’’ on their Instagram page.

Authoritarian ideology will attempt to detain everything and everyone that might be a threat to its power. If we are talking about a male-dominated Islamist government like Turkey’s, then it might as well detain people carrying rainbow flags. However, it won’t be able to control the rain or stop the sun shining afterwards - and the rainbow will be over the sky again, beautiful in all its colours.