WOMXN IN MOTION: ON LEARNING, DANCING, ARCHIVING AND SOMETIMES CRYING TOGETHER. AKA, GRAZIE DAFNE.

Stories about collective self-affirmation, working with others and the messiness of research.

Last year, I was commissioned a short text on enthusiasm by frieze magazine. After turning to Greek etymologies for help, I ended up praising ataraxia (calmness, impassivity) because I perceived the pressure to perform perpetual radiancy and motion online as crushingly unsustainable. In retrospect, maybe I should have been more careful with expressing my will to be static rather than ecstatic, as these last months brutally tested. But in the same piece, I also wrote about the joys of dancing in the streets of Milan in solidarity with Tomboys Don’t Cry - the erotics of dancing and moving together being what my body has missed most.

Tomboys Don’t Cry is “a platform for girls of any gender and non-binary creatures aiming to promote a post-identity agenda within artistic practice, with the effort to create days and nights adventures”.

It was created in 2011 by Dj S/HE and artist Dafne Boggeri. I’ve known Dafne for years and today I’d like to talk about a project i’ve shared with her and other friends, and what i think i’ve learned from it.

Dafne’s initial experiences within the Italian hip-hop scene -  where being a teenage lesbian train writer was an exception met with plenty of gender pressure - shaped her ways of reclaiming and occupying public space. Such ways are polyphonic, like her artistic practice, embracing performance, installation, music, publishing, design, film making, activism, and curatorship. She is a serial generator of networks. In 2000 she co-founded the Pornflakes Queer Crew; from 2009 to 2011, she co-created with Noga Inbar the MOTHER itinerant feminist festival (Tel Aviv 2009; London 2010; Berlin 2011; Swiss Off-site Pavilion, 54th Venice Biennale, curated by Andrea Thal, 2011). Her solo show LIANE~LINEA~ALIEN, curated by Giulia Tognon at Marsèlleria in 2017, was a mix of live sessions, sculptures, posters, drawings, videos, photos, workshop for kids, and performative secret cocktails. Since 2013 she curates in Milan the non-profit platform SPRINT, which is not only a Salon for Independent Publishers and Artists' Books, but also a program of exhibitions, talks, readings, screenings and a warm and caring community-building enterprise. 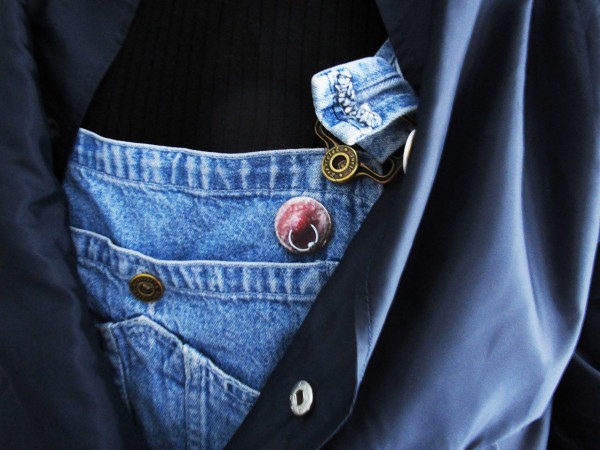 Selected for the current Quadriennale in Rome (titled FUORI, literally ‘out’, in homage to the Fronte Unitario Omosessuale Rivoluzionario Italiano, the Italian United Homosexual Revolutionary Front, founded in 1971) with a project focussed on “the practice of crying, and its physical, cultural and social dynamics”, Tomboys Don’t Cry extended the invitation to a choir of voices: besides Dafne, Deborah Joyce Holman, Idioletta, Rada Kozelj, Tarek Lakhrissi, Eleonora Luccarini, Karin Michalski e Ann Cvetkovich, Elena Radice, Cinzia Ruggeri and the duo Real Madrid - with whom Dafne recently published the pamphlet Vizi Privati, private vices, in reference to a shared passion for archives of LGBT+publications.

Dafne is an avid collector of independent publications, fanzines, magazines, flyers, stickers, all forms of printed matter. She also collects queer cinema and videos. Body Language #4, a screening from the eponymous itinerant research platform on moving images by TBDC, organized at the project space Il Colorificio in Milan for the opening of their year-long project L’Ano Solare, included the video “B.U.C.K.L.E.” (1993) by Catherine Gund and Julie Tolentino. It brought me back to the my student days at CUNY and the legendary Clit Club in New York, where i was once dragged by Claudia, the same friend who also brought me to Lorde, to hooks, to the Lesbian Archives in Brooklyn, and opened so many doors, books and discussions for me - back then, an angry young art historian unconsciously at war with the normativity of art history and the cringing dryness of academic discourse, very much looking for a voice on her own. It’s in the resistance to some oppressive structures of language, I think, that Dafne and I we cross paths.

She defines her archive as “messy, non-premeditated, born by chance” and “elastic in its vision and in the way it is managed”. It is also the result of a controversial relation with the written word, started with a personal difficulty to read and write as a kid. “Books, in my case, initially represented a symbol of conflict with the concept of hierarchy, including language. Even before learning to read I was aware of being lesbian, and had the unconscious intuition that none of the speaking voices in those books could partially be mine. Fortunately it did not turn out to be true.”

In 2019, for seminar on sexuality and visual cultures conceived together with Lucrezia Cippitelli and Simone Frangi (and subsequently Raffaella Pulejo) at the art academy of Brera, we asked Dafne to lead a workshop with the students. She proposed to transgress - i.e., to move out - the class and look into a series of alter-institutional archives in Milan, starting from her own. The result was a self-organized, layed out and printed fanzine, If I Can’t Archive I Don’t Want to Be Part of Your Revolution, whose title rephrases  a famous slogan by activist, anarchist, feminist and philosopher Emma Goldman.

She brought the students to the Primo Moroni archive, hosted by Cox 18 - Centro Sociale Occupato Autogestito. It includes over 15.000 books and 1500 magazines. Together they examined all the issues of the magazine F.U.O.R.I., published from 1971 through 1982, plus a special collection of articles by the Milanese writer, activist, playwright and thinker Mario Mieli (1952-83), who in 1977 published Elementi di Critica Omosessuale (Elements of a Homosexual Critique, translated in english in 2018), pivotal for the theory and embodiment of transessualità. Also Primo Moroni was an important figure for counterculture in Milan, from the ‘60s all the way through the ‘90s and cyberpunk. Before opening the famous Calusca bookshop, that operated as a meeting point and shelter for generations of non-aligned individuals and groups, he worked as a professional dancer and was once a European champion for charleston. I guess movement and movements defined all his life. I find it equally important to remember that Calusca was initially created by Primo and his wife Sabina Moroni with the idea of providing texts, publications and informative materials for progressive teachers who were trying to adopt antiauthoritarian pedagogies - on subjects such as emigration, repression, the condition of women - with the desire to “set the school in motion”.

Dafne invited the students to visit also the Compulsive Archive, created by film-maker Giulia Vallicelli, by collecting and archiving publications, letters, catalogues, records, books and memorabilia on the Italian punk scene from the 90s to the 00s, with a specific focus on the Riot Grrrl e Queercore movements. A third visit was paid to the group show SAVAGE at Galleria Otto Zoo, curated by Self Pleasure Publishing, an editorial platform by the artist Jacopo Miliani. Based on the relationship between sexuality and language, the exhibition included works, publications and books by artists, plus a special project by the Archive Luca Locati Luciani, which for years has explored the area of LGBTQI+ sexuality by collecting essays, magazines, “ephemera”, and photographic material.

We presented the fanzine in Brera in February 2020, right before the start of the pandemic. The evening included the screening of a crowdfunded documentary film titled Melmaridè (a derogatory term, in dialect, for divorced women) by two close friends of Dafne, Elisa Bozzarelli and Alice Daneluzzo. The film reconstructs the story of the small group of women who started a feminist, self-organized free clinic in Piacenza in 1976, a very small, very conservative and very patriarchal town. One of them was Elisa’s mother. With this “story of feminism, liberation and friendship”, the directors reconstructed a very personal, and at the same collective genealogy of dissent rooted in their culture and language. The film testifies to the importance of feminist legacies and how liberated vocabularies, sexualities and bodies can help empower a number of present practices.

I’d like to point out that Lucrezia, Simone and I, did not participate in the making of the fanzine: we just made room for it with our Monday reading sessions, where we were so happy to welcome also a special conversation with Corrado Levi, one of the founders of FUORI and a long-time friend and supporter of the feminist Libreria delle Donne in Milan. An architect, artist, intellectual, queer cultural agitator, poet, teacher, critic, curator, collector and silver glove of French boxing savate, Corrado Levi is simply amazing. Born in Turin in 1936, he was a pupil of Carlo Mollino and Franco Albini, and worked as a professor of architectural composition at the Faculty of Architecture of the Politecnico University of Milan. He brought with him an impressive kindness and moving enthusiasm.

Dafne and the students worked freely together, back and forth, for weeks. The texts, emerging from individual research, are all very different, and sometimes uneven, while the transcriptions of dialogues include the mistakes and slips of memory that orality itself includes all the time. They are also passionate and personal and self-affirming. They made me think a lot about what we teach to suppress by default, and what we would need to learn to unsuppress, in order to let ideas, voices - and sometimes tears - emerge. What to do with the archive and, as Ariella Azoulay reminds us, what is not visible in the archive, guarded off, excluded, silenced.

So mille grazie Dafne, indeed, for turning the class into a place of pleasure. Can’t wait to dance again together.