ANTISEMITISM IS THE LEAST OF DOCUMENTA FIFTEEN’S PROBLEMS

The roots of the current controversy about antisemitic imagery found in some artworks exhibited in documenta fifteen need to be linked to Ruangrupa’s curatorial methodology for the exhibition, a product of European funding for global south art and the European plans for decentralized and outsourced cultural production envisioned as far back as 2006.[1] Did the removed artworks by Taring Padi include antisemitic images? Of course, yes! Those who are arguing otherwise by pointing to contextual differences between where these images were produced and shown originally versus the present political frame in Germany are only embarrassing themselves.

At the same time, what can you expect when you invite a group to curate the exhibition whose methodology is like a "Decentralized Autonomous Organization (DAO)"?[2] This is exactly what happens when the authority over the form and content of the exhibition is subcontracted many levels away from the main curators to other groups and individuals in the name of collectivity and diversity.

But we also know that these antisemitic images were created not to be racist towards Jewish people, per se, but to criticize the state of Israel in the crassest and most unthoughtful way. There is a huge difference between those espousing Jewish conspiracies ─ assigning negative attributes to Jewish people as a race or culture etc ─ and the kind of naivety I call  “political” anti-semitism seen in documenta fifteen. This secondary type of antisemitism has very little to do with the cultural or racial attributes of Jews, but instead causes harm and insult by conflating the wrongdoings of the state of Israel with Jewish people. The difficult pill to swallow is that, unfortunately, one can argue that this kind of antisemitism begins with Israel's use of the Star of David ─ the symbol of Judaism ─ on its flag as a country involved in prolonged occupation and occasional wars with its geographic neighbours and local Palestinians in occupied territories. This kind of conflation happens especially during Israel’s military assaults on civilians in Gaza or Lebanon with bombs and jet fighters adorned with the Israeli flag. In this way, even printing the Israeli flag on bombs and jet fighters is antisemitic because it makes "unsophisticated people" (majority of the world's population) blame Jewish people and Jewish religion for the wrongdoings of a state. 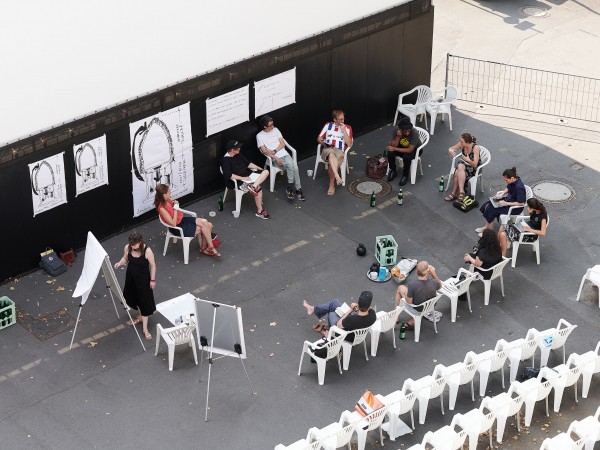 However, we can't discuss the nature of antisematism ─ its diverse geneology and species ─ in Germany because this society, that actually murdered six million European Jews less than 100 years ago, feels righteous enough to go around and call whatever violation of Jewish people's dignity ─ small or big intentional or merely political ─ as one kind of purely evil antisemitism. Imagine how unfair it would be if those convicted of a heinous crime appoint  themself as the judging body to oversee the criminal proceedings of those who committed seemingly similar offenses.

The argument here is that Germans are perhaps not the best adjudicators for this complex problem. The shame and trauma derived from the elder generation’s Nazi crimes cannot lead to the German’s rational nor considered judgement of antisemitism.  Their guilt cannot be the sole basis for a sound judgement on the nature and function of antisemitism today.

As an artist and curator, I have been critical of this edition of documenta from the day a group of very well-known art world leaders appointed Ruangrupa to direct this production! I felt the Indonesian collective’s appointment was politically motivated by a kind of culture policy supported by some European countries, like the Netherlands, to push the production of exhibitions into a decentralised and distributed model away from artistic autonomy and responsibility. I have been critical of this methodology that has been responsible for problematic images like these ones ending up in exhibitions without the main curators taking accountability.

Interestingly enough, some curators on the selection committee for this edition of documenta, alongside some other Euramerican scholars, jumped to celebrate and exaggerate the success of the exhibition without even waiting to see what kind of content might be discovered in this chaotic, anarchic, and unpredictable iteration. I hope these people are feeling sorry for their rush to their positive judgment, hyped on their social media accounts.

Still, at the end of the day, these images should have been vetted by the curators, but because they were not and ended up in the exhibition, the curators should have fostered conversations about the show’s disastrous model of curating, as well as a wider discussion about Israel’s aggressive presence in the Middle East as a government that claims to be a state for all Jewish people of the world. In my opinion, if a society genuinely feels responsible for murdering six million Jews, it must then overcome its collective emotional response to these images and handle their uncomfortable and offensive existence in a sober manner. This event should be used as a forced chance to open larger discussions about the nature, form and content of global contemporary art, as well as the fraught relationship between Germany and Israel, and the two countries' moral claims and responsibilities in this regard.