IN REAL LIFE THERE IS NO REWARD

Review of "Cœurs Simples", a solo show by Agnes Scherer

Time—and the meaning of time passing—is not something natural, but an object of design. With the invention of the clock and the observance of clock time, disciplines of work and labour time became phenomena that helped to shape capitalist logic. In most cases, the clock belongs to someone other than yourself; as the writer and theorist McKenzie Wark states: “the whole time, time itself, has become a commodified experience.” (1)

In Agnes Scherer’s solo show Cœurs Simples at the nomadic gallery Sans titre (2016), we are presented with an object of time labour in the form of a servant's bell board. In the 19th century, servants did not have proper time off as their bedrooms were exposed to the bell board; hence, they were forced to be constantly available. In Scherer’s installation, two young women are lying in bed with their computers and iPhones while entangled in a net of strings coming out of the bells with small notes attached. The notes read short correspondences between the artist and different people from the art world with a recognizable tone of underlying anxiety. Exemplified in one note reads the all too common “did you get my email”, followed by a triple question mark. 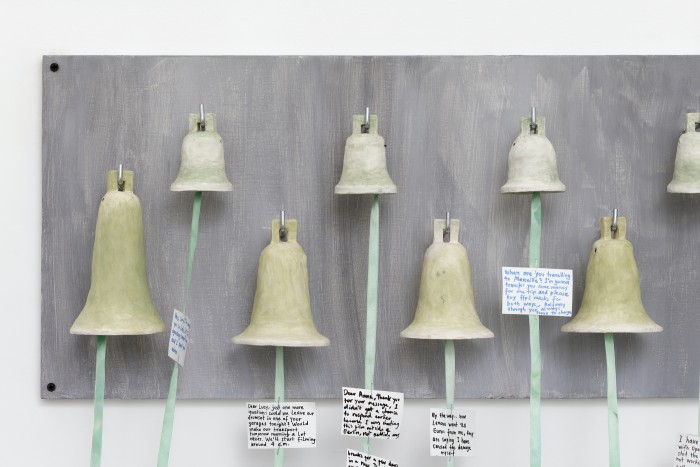 With everyday messages coming out of the bells, the artist intertwines two distinct time periods, alluding to the fact that they may not be too far from one another after all. In blending modern day digital devices with the historical bell board, it appears that the work of the artist and the cultural worker take on a similar form to that of the 19th century servant:  constant availability.

While the bell board is installed in the back room of the gallery, it is at the same time connected to the desk in the front room of the gallery. In pointing to the invisible hierarchy inherent in the relationship between the artist and the gallery, Scherer performs a sort of meta reflection of her own position as an artist—and more so: as an artist represented by the gallery. While the backroom is staging a behind the scene scenery, the front room of the gallery is more of a classic gallery exhibition, showing the more commercial part of the artist’s practice with paintings as the dominating medium. However, this part of the exhibition expands on the aforementioned relationship through a Marxist lens. In Marx’s theory of exploitation, it is held that workers in capitalist society are exploited insofar as they are forced to sell their labor power for less than the full value of the commodities they produce. On the wall, we see a plate depicting the artist crafting a sculpture of a baby in her studio. Below the plate and next to the gallery desk, we find the product of her labour: an installation of the real baby. The two pieces seem to reflect on the imbalance between labour time and final commodity value—and we already know who the surplus value will benefit.

You may read the show as an enclosed reflection of the artist’s experience in the capitalist net that is the art world, where young artists have become modern servants—both in and outside of the unavoidable hierarchical relation between artist and gallery. However, in my opinion, it points to a more general pattern within the cultural industry that demonstrates a new take on Marx’s critique; one that is happening specifically in the exploitation of cultural workers—artists and freelancers alike. 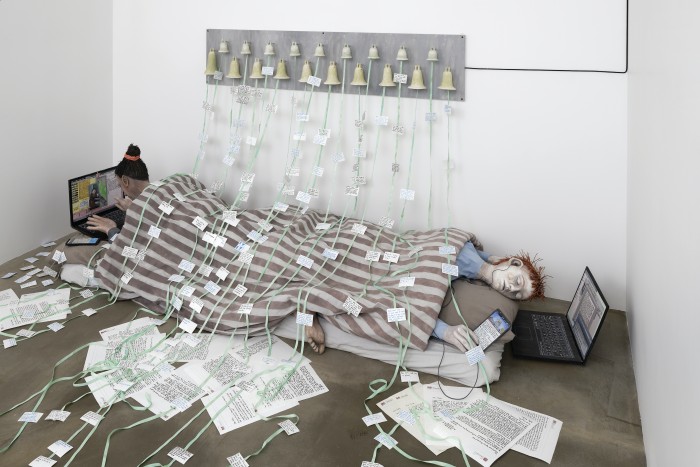 Increasingly, cultural workers view their work, which motivated them to become freelancers and artists in the first place, as a luxury to indulge in when time (and money) permit; experiences that trouble the concept of relative autonomy. (2) On the screen of one of the computers in the bed, one of the women has typed in the question “Is this the year I’m going to make it?”, which illustrates how time has become a commodified experience in the exploitation patterns within the cultural industry. Traditionally Marx’s definition of exploitation is given in terms of the theory of surplus value, which in turn is taken to depend on the labour theory of value: the theory that the value of any commodity is proportional to the amount of labour embodied in it. However, in most cases, cultural workers are understood to be unique kinds of workers and cultural work radically differs from other kinds of work, removed from traditional labour-capital antagonisms.

For the artist or the cultural worker, the surplus value is not so much created on the basis of selling labour power to survive, but more so on labour time in exchange for influence. Time equals influence, and influence enhances the hope for success. And as author of the accompanying exhibition text, Oliver Marchart, writes, “cultivated naivety seems to make it easier for artists (and other cultural freelancers) as well to embrace the fate of casualization and precarity.” (3)

The acceptance or embrace of this pattern feeds a structural acceptance of the devaluation of one’s work and work time. While one is reassured that the investment of time to achieve some level of influence will always be more valuable than not writing that text or taking that non-paid internship. The question that appears is then whether this concept of “cultivated naivety” should be understood as a new form of (self-)exploitation? Exploitation is a dynamic concept. It links antagonism and resistance: those who exploit workers are also dependent on workers to realize surplus value, which gives workers power and an inherent capacity to resist.

While the resistance in this matter ought to materialize on a sociopolitical and structural level, time has taught us that the fixed idea of capitalism only comes to an end when it is negated by the force of an agency coming from below. The aspiration for me in joining the so-called “cultivated naivety” and my choice to write about this topic is, however, due to the same belief that the force of resistance must come from below.

Sadly though, the circle then stays complete. And in Cœurs Simples, Agnes Scherer is making us reflect upon this paradox to perfection.