NOTES ON VIENNA: REFLECTING ON ITS FACADES AND THE WORKERS WITHIN

Through the halls of the city, art fairs, galleries, and the social housing system.

Café Jelinek lodges a hunchback who sips coffee between her shakes and murmurs on an early Thursday morning. Her gray hair is pinned, the long skirt remains dusty, and spider webs are habitually unscathed on heavy velvet curtains. Whatever this image evokes, it is a type of grace that outlives passing systems of value; a meaning that can continuously reflect onto itself, and forge spiritual sustenance from it. It sounds like an anthem:

This line, from the song Lauf Davon by Danger Dan, is also taken to heart by Stefan Bayreuther who sent it to us and was ultimately made into a flag by Paul Sochacki. Being a student and passionate home cook who finances his studies with small side jobs, he has lived at the historically emblematic Reumannhof housing estate with his fiancée and their little dog since 2021. For Stefan, Lauf Davon represents how in any form of work there is ideally a certain amount of freedom that we can hold onto.

Stefan is one of the six dwellers of the Gemeindebauten, the social housing buildings that shape Vienna, which has participated in a process that Arts of the Working Class opened up a year ago on invitation from the curatorial collective WHW (What, How & for Whom), whose members are currently the directors of Kunsthalle Wien. Throughout the curatorial process, we spoke with one of its directors Nataša Ilić on work and its absence, as well as Marienthal: The Sociography of an Unemployed Community– a book by Marie Jahoda which inspired Nataša to develop an exhibition on unemployment, workers’ rights, inclusion and exclusion mechanisms through labor. A telling passage from the book gives a title to the upcoming exhibition “In the meantime, midday comes around” that will be exhibited at the Kunsthalle Wien this upcoming November:

"Time passes twice in Marienthal, differently for the women and differently for the men. For the latter, the division of hours has long since lost its meaning. Getting up - lunch - going to bed are the points of orientation left in the day. In between, time passes without quite knowing what has happened. The time use sheets show this drastically. A 33 year old unemployed person writes: (...) In the meantime, midday comes around..."

Whilst thinking of a preface to this exhibition, members of this street newspaper took the Gemeindebauten as a stage that obliges Viennese to think of their own perception of contemporary unemployment and labor rights in the city, and compare them to how they were formulated in the socialist era in the century past. This deliberation clearly coalesced with the art fairs Parallel Vienna, viennacontemporary, as well as the gallery program Curated by, whose openings took place in the city during our visit. Taking Jahoda’s insights to heart, we too desired to comment on the precarious conditions of cultural workers and the weaponization of “useful unemployment” by an exploitative class. Her words prompted our call to the participating residents of the Gemeindebauten at Karl-Marx-Hof, Fischerstiege, George-Washington-Hof, Reumannhof, Metzleinstalerhof and the Gemeindebau im Werd to send us what they perceive as the most important lines from a piece of music they hear at work in the format of an open call. In the inaugural ceremony held in Karl-Marx-Hof, the six flags that were designed in collaboration with the inhabitants of different Gemeindebauten and executed with the Kunsthalle Wien and wohnpartner were hoisted on its roof, as well as on others scattered through the city that will remain there until the end of October. The chosen lines that were then on the six hoisted on six flags will, we hope, inspire us all to think about work and leisure as an apparent binary system, an amalgamated experience of time which we renegotiate again and again beyond the weekend. 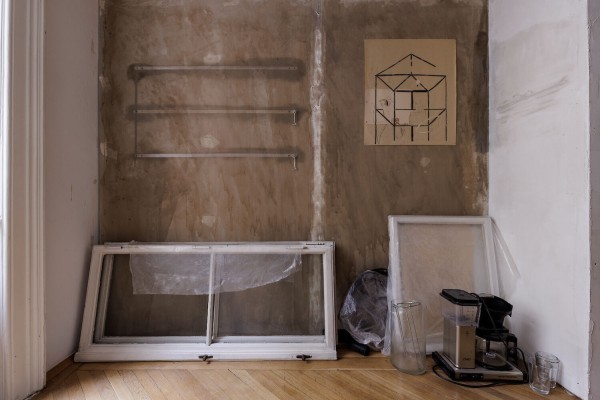 During our week in Vienna, we coupled with local artists Marko Lulić, Nour Shantout and Peter Duniecki to embrace that very tradition of workers made possible by introspection and revolt; we all avowed ourselves to the romance of public space invoked by the cultural imprint that the Gemeindebauten continue to have in the now faded red city. When we met them, the three cultural workers turned storytellers recounted their own urban myths encircled by the Danube, far too many to count; tales of up-to-no-good neighbors and whatever seems to happen in gardens after dark. The three reminded us that folklore is not an unreclaimable traditional relic of an imagined past, but rather a delicate social condition that is always in the making – one that needs to be taken care of in communal harmony always and forever.

Shared visions of identification and belonging are absolute in the only German-speaking metropole that has been granted the gift of almost uninterrupted aging. Viennese waltzes still exist between cuffed suits and the many variations of Schnitzel; an enticing environment for the art fairs we took part in. By exchanging work for leisure, we gave ourselves a tour through the shows gathered under the umbrella of Curated by, for which Dieter Roelstraete was invited to give an overarching topic. He called it KELET, Hungarian for ‘East’. 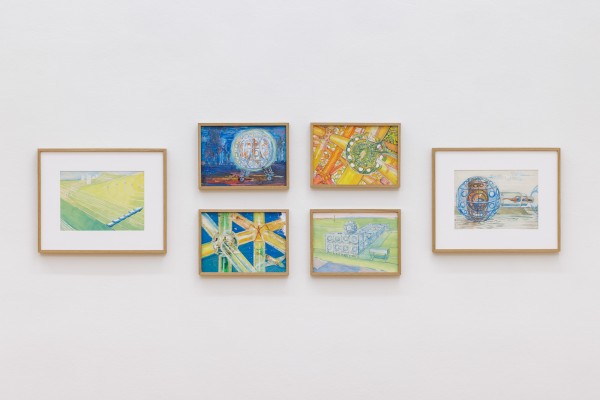 Answering this geopolitical proposition, Croy Nielsen exhibited the works of the late Ukrainian artist, magician, Fedir Tetyanych. The Neverending Eye exhibition is one that wanders to different sights outwardly, as well as internally; a neverending eye is one that is wide shut. The exhibition, cared for by Natalia Sielewicz, displays Tetyanych’s echoes of the constructivist artists of the early-twentieth century, and their bid to expand even further the limits and therefore possibilities of human imagination. His paintings of utopian dwelling outline a community divided by cells – a figurative illustration of his body politic. One image in the series grabbed our attention; a glimmering geodome placed on a small set of wheels fit for one, a glowing shelter in a polluted world in the backdrop. This temporary technological fix is not a solution nor a comfort for the silhouette of the individual placed in it, who unmistakably resembles Da Vinci’s Vitruvian Man. It is a Baba Yaga made of nuts and bolts, frightening for its now-welcoming nature. Lennart Wolff and Elisa R. Linn also centralized play of material and the desire for other futures in their exhibition The Future Looms, which is presented at the Layr gallery. Perhaps most time-sensitive are the works of Charlotte Johannesson, computer coded to the same pixel dimensions of her analog loom. Weaving technical traditions with technological apparatuses, Johannesson’s works such as White Flag and Rocket (1981-1986) divert from the intentionally murky subjects with a festive color scheme. In this sense Johannesson is prophetic, predicting the blurring of thematic significance in favor of constant technical anticipation. But that hope, that flamboyant  enthusiasm, is already embedded in very clear coordinates– a trajectory by which we know, whether as subjects or audience, where we are coming from and where we would like to go: we go gentle into that good night, head west, and journey on to the Kelet. But if we already connote adventure with movement in our cultural imagination, how can we redeem the idea of stagnation? Tolia Astakhishvili unfolded I am the Secret Meat for the Felix Gaudlitz gallery. The gallery space was now a discomforting atmosphere; something between a crime scene and an abandoned flat. Tolia spatially plays with her understanding of those terminologies, in a desolate setting filled by the poetry of Nat Marcus and the carousel of images selected with James Richards that resemble the cabin and prison cells they presented within The Holding Environment at Bonn Kunstverein last year. Neither a destination nor a starting point, Tolias installations –the window panes smeared with brown glass paintings in plywood structure– obfuscate any physical and intellectual illuminations of the room. Windows, ways, doors, holes (2022) and exposed concrete walls reveal the often-glossed-over transitional narrative of art. The vagabond of materiality deprives space of meaning; omnipresent cravings manufactured an aesthetic compass that points in all directions at once. Other galleries have also responded to these now-antiquated stylistic demands of an imagined, impatient audience. Wonnerth Dejaco works with the Bucharest collective Kilobase to present the explosive JOY ~ JOY ~ JOY ON THE PEPPERSIDE OF SUPRAINFINIT,  an artistic project in the form of a nomadic art gallery that Dragos Olea and Sandra Demetrescu pull through the different scenes where they move. Presenting mostly queer positions from Romania, the exhibition includes an intricate series of pipes through which the visitor can eavesdrop on faint sounds of prohibited Western music from the time of the Cold War. Yet what remains in the hushed moments in-between the pipes are somber moments crafted by Alex Horghidan. Three muddled individuals after a threesome, inscribed by Horghidan with a pencil sketch, are territorialized by a heavy radiator and too many leaves to count. The image presented is dented, just like the awkward social situation that the three subjects are in. There are people out there too, in the apartment complexes behind them. But the only source of light emanating in the room is not at all shared, but depressingly shimmering from the phone of the laid and plump figure that now becomes their own source of illuminated reflection, no longer in need of physical confirmation. 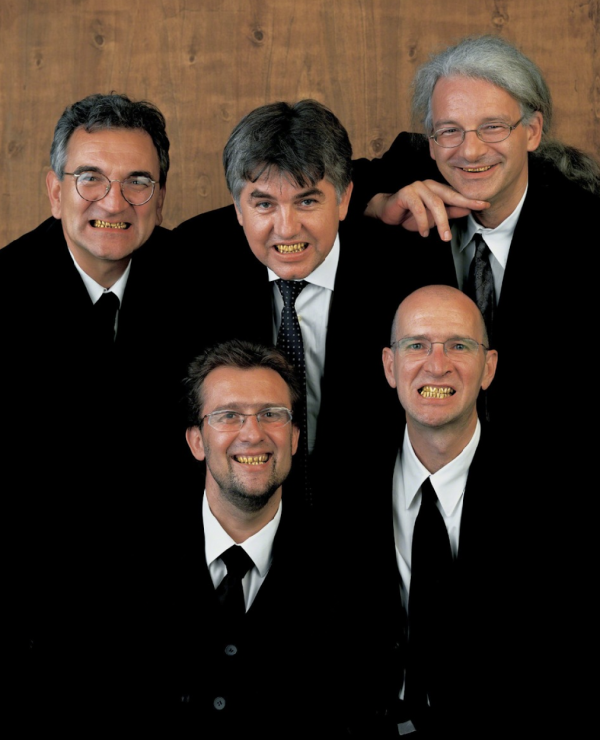 Over at the viennacontemporary, transformed into a non-profit setting within the art market by the artist and curator Boris Onderičkka, the Zeller van Almsick gallery took care of aesthetic directions, and presented a series of three geolocator sculptures made by Kay Walkowiak titled Be Here Now (2022). These precise reminders of mindfulness and presence were confronted by the paintings of Minda Andrén; wherever Walkowiak emporphically wanted us to be, Andrén pinpointed us to the reality on the ground. Her struggle between her subjects, whether with one another or with themselves, was a compelling contextual and visual refutation that created substantial harmony between the two. An additional source of dispute and resolution was on show at the Gregor Podnar gallery, which hung a portrait of the Slovenian avant-garde group IRWIN from twenty years ago. The photograph, which is decked by the black mass formed by the proximity of their suits, creates a uniformity in character and, of course, style, that the group is known for. Looking straight at us with a sleazy, smug sheen, their mug glistens from the golden dental fronts which put their money where their mouth is.