Artspring is not a conventional art exhibition; it swaps the roles and hierarchies between the artist studio and public places for art. Every year in May and June, just when the days start getting warmer in the German capital, Artspring opens up the otherwise private working environments of a manifold of local artists, offering visitors a first-hand insight into studios in Berlin’s district of Pankow, Prenzlauer Berg and Weissensee. It goes almost without saying that the by-now standard hybrid model was put into place this time as well: next to exhibitions, concerts, readings, performances, a film and literature program, an online programme was also featured, with videos of exhibitions and various podcasts. The centerpiece and finale of the festival month, however, was the Open Studio Weekend during the first weekend of June, in which a large number of approximately 320 artists participated.

Ever since the festival’s inception in 2017, Artspring gets fertilised each year by new ideas in order for art and culture to be made more visible and accessible not only to the initiated few, but to the people that might not be affiliated with contemporary art in any (professional) way. Since Pankow, Prenzlauer Berg and Weissensee are not officially designated as hotspots of the Berlin art scene, for this reason it is even more important to shed the light on the vibrant artistic activity in these neighborhoods. The festival is an initiative founded by artists Julia Brodauf and Jan Gottschalk and is supported by the Ateliergemeinschaft Milchhof e.V. in cooperation with large studio houses in the district–for example, the studio house on the Prenzlauer Promenade, the Milchhof studio community in the Schwedter Straße and the Interkulturelle Haus Pankow in the Schönfließer Straße. In this way, collaboration, local community and creative synergies are created, renewed and mixed year by year. 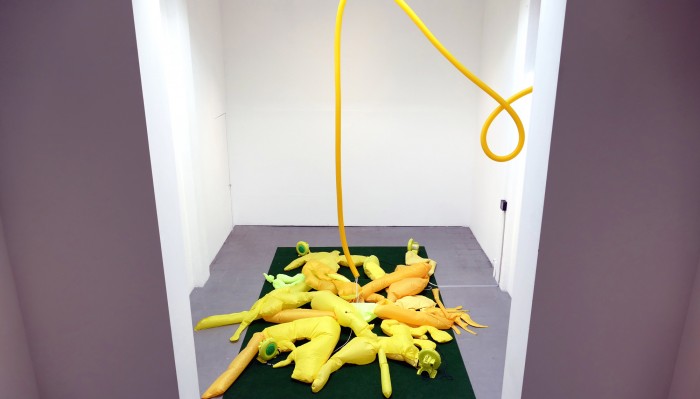 This year, an overview of each location was offered in the form of an Artspring festival’s own newspaper, which was specifically distributed in the mailboxes of its neighbors before the big weekend. Despite the socially distanced nature of the studio visits, under the festival's motto “Signals!”, one could stroll around the studios rather freely, only due to the sheer amount of the works on view. At Meinblau Projektraum, a project space founded in 1997 at Pfefferberg in Berlin, one could observe Julio Lugon’s head-turning yellow-hued installation entitled Elephant meditation, which also served as a sound piece, filling the room with a peculiar sonic landscape. Moving on to the Ateliergemeinschaft Milchhof e.V., where around 45 studios are currently hosted, Elisabeth Sonneck’s colorful installations reimagined modernist monochromes for the contemporary present, and Heike Gallmeier’s wooden sculptures produced rather soothing effects in the viewers, reminding us of homely interiors in times, where apocalypse still seemed a bit more distant. At Turtle Lab, a shared studio and research space located at the basement of Schwedter Str. 262 and run by Yuki Jungesblut, Sharon Paz’s cardboard sculpture served as an imposing reminder that isolation is afterall a state beyond nature, something that none of us is deserving of. Seeing stimulating artworks after a long winter lockdown felt refreshing, hopeful but at times also overwhelming. It made the relearning of the appropriate social etiquette when observing art a tad less tedious. 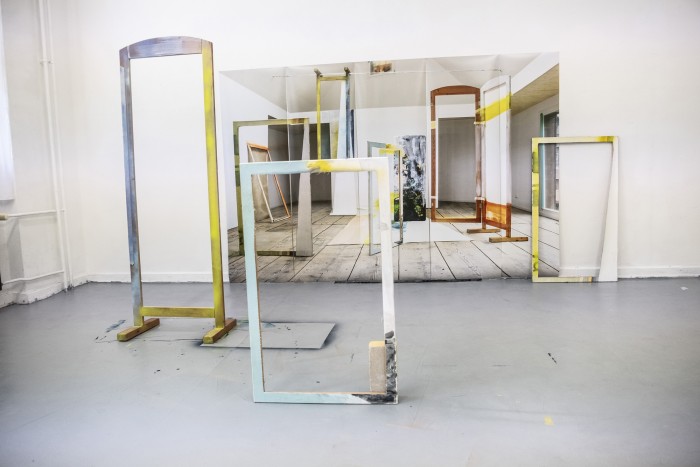 Speaking of isolation, Artspring manages to dispel with the (maybe romantic, but surely outdated) conception of an artist working secluded in their studio, caring little for external influence. On the contrary, it is in the very core of art production that intersubjective relations are to be found, because good ideas only arise when we discuss them with others, and when we let others into the environment where such ideas arise: in this case, the mythical artist studio.

Artspring Berlin has been funded by EFRE (European Regional Development Fund) and has been co-financed by the Berlin Senate since 2020. The activities related to the artspring walk 2021 are funded by the Draussenstadt Berlin initiative.