SUBTLETIES AND WARNINGS: POWER AND THE EDIBLE GROTESQUE

A ten-course banquet for thirty guests: a contemporary take on the history of English Medieval ‘illusion foods.’

Foods that look like one thing but are made of another are mixed with ‘subtleties and warnings’ (symbolic foods used to inscribe the bodies of the guests in allegiance to the host). The ten dishes reference different literary or historical figures and events (including Alan Turing, Daniel Paul Schreber, the literary character Battista from Italo Calvino's The Baron in the Trees) to talk about how bodies and sexualities and the act of ingestion can take on surprising forms that challenge our normative cultural boundaries.

Ancient Romans often opened a feast with a smell as the first course. Sometimes flowers and fragrant leaves would be strewn on the floor or the table would be rubbed with mint. During a feast hosted by Emperor Elagabalus, his guests were showered so thickly with flowers that some of them suffocated to death. Doves, slathered in scent and released to flap about a room, were often used to diffuse fragrances.

This first course is a scent delivered to you on a sugarpaste sculpture of a bird with a rose for its head. It is scented with an imitation of the patented smell by the British company, Bodywise, a manufacturer of sexual lubricants. Not unlike the sweat of gladiators that infused expensive, aphrodisiacal Roman lotions, this smell – a pheromone derived from male sweat – was sprayed by Bodywise onto furniture and debt-collection letters in calculated studies. Results found that although the scent was barely detectable, it had a dominating effect, causing an avoidance of scented chairs (except in menstruating heterosexual women) and a 17 percent increase in successful repayment of debts. The meal begins with this scent in order to lure the diner into submitting, opening the orifices for all the monstrosities to come.

This dish – shaped like a rat – binds together the contradiction of both the allure of the exotic and the fear of contamination. When the Age of Exploration brought Eastern spices back to Europe, the wealthy elite who could afford them concocted recipes and banquet foods infused with these new tastes. Consuming spices or ingredients from exotic, unknown lands allowed certain Europeans the ability to literally ingest, digest and process the frightening and exciting idea of cultural expansion. The rarity of foreign spices made them exclusive to the kitchens of nobles and to the apothecary; there were few medicinal recipes that did not involve spices and sugar, alongside ground pearls or gold powder.

During the fourteenth century, Europe was ridden with several outbreaks of the plague, now explained in the dominant narrative as having travelled via the Silk Road on the backs of flea-infested rats. Common talismans used to ward off the plague were fabric sachets or metal pomanders filled with strong smelling spices. Doctors of the plague often wore an anti- contamination costume with a long ‘beak’ filled with these spices.

This dish of rats and pepper are both the fear of infection and its cure wrapped in one. The plague that came along the Silk Road with these spices and peppers infused bodies with foreign irruptions, darkened tumours, turning the body black from the inside out, speaking to racialised fears of miscegenation as a form of contamination. Many speculations on the origin of racial difference at the time reflected this linkage between race and disease. The Spanish Benedictine friar Benito Jerónimo Feijoo's theories on the origin of blackness began with “a tiny black spot on a man's genitals and on the fingernails of both men and women” that spread, over time, until it took over the whole body.1

In the world of appearances, the political advocacy group, Americans for Prosperity, are very prosperous and free. They roam around wherever they like, scratching the dirt and pecking seeds, fulfilling their need for protein with the ample insects in the fields of the Bountiful Country. Some virtuous and exceptional hens grow to enormous size and are much applauded for their marvelous girth. A chicken of this size must be cooked with great pomp and ceremony, rubbing salt and spices underneath its plucked skin, massaging it in like powder on a baby's butt, or a tender, gynecological hand.

These spice-rubbed chickens are then diaper-wrapped in lotus leaves and encased in clay likenesses of very important men. The principle of magic operates like this: the likenesses will fuse, through heat and osmosis, into the flesh of the chicken. Anyone who partakes of this magical flesh takes on the power of the person whose effigy encases it.

The dish comes from the traditional Chinese dish, Beggar's Chicken, which claims it originates from a resourceful peasant who stole a chicken from a rich landlord. Upon being chased by dogs and guards, he hid the chicken in the soft mud of a river bank, and outran his pursuers and got away. Later that night he returned to the riverbank and dug out the chicken and roasted it on a fire, clay coated and all. The clay kept the meat moist and tender and had the joyful taste of reappropriated wealth. 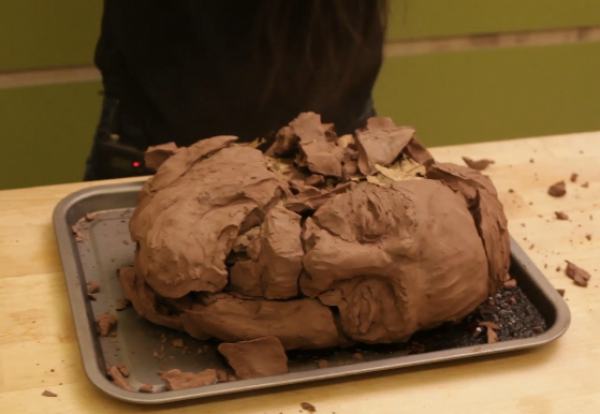 Italo Calvino tried to remake you into a stay-at-home nun with a rodent-like face, but I still remember you by the fabulous meal you cooked for me. It touched me from the inside out. “The most delicate animal or vegetable jewellery” – that was how he described your food. But I think of it more as a beautiful kind of rage: small pin pricks of slow, soft violence, like letting the hem of an outgrown dress down one more inch.

You were stretched so thin. After they found you with the son of an enemy, his trousers ripped to shreds by your scalpels, nails and teeth, you were bricked up like an old chimney in mortar and lace. They were embarrassed by your voracious sexuality. What would anyone do with a family like that but fuck them with food in the face?

Ultimately your creations set your disgusting brothers free, not that they used the opportunity well. You were the baby porcupine, tender fleshed and full of quills. They were the snails in the barrel, purging their own waste. Until you took them in your long hands and showed them just how liberating a knife could be. They are swans now, their necks arched in eager flight.

And which of your dishes would I claim myself? The rabbit ears poised and listening, wriggling on a Catholic collar of fur, or the roasted boar with his tongue held in pincers like a prize? I've made you my clumsy best imitation as a form of flattery: your insect tart with honey ants and mopane worms from the other side of the globe, touted for their lustful effects. Not that you need that!

This dinner took place at Delfina Foundation, London on 29 January, 2014. 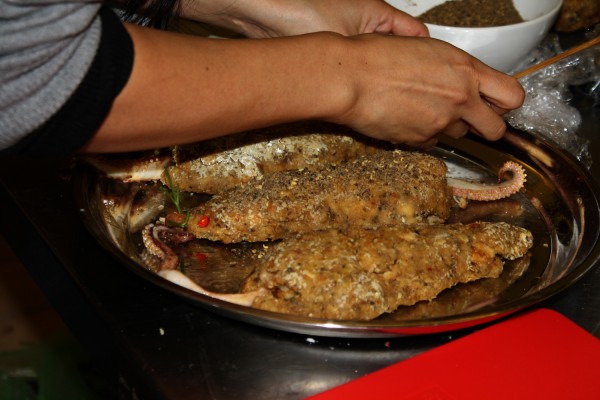