When is voice accessible and when is not?

When is the voice accessible?

When is the voice inaccessible?*

*(Text in bold refers to the accesibility of the voice, text in italic to the inacessibility)

s1: i'm trying to understand what an accessible voice is. bear with me, it’s a process. i'm exploring what it could mean. is it a question of how we experience the voice?
s1: and then, i think about our emotional cores / our culture / whether it makes a difference.

s3: a voice is accessible when it answers, when its response assumes responsibility, when it shares its origin, is accountable, impressionable, when there is an opening. accessibility is a porous border where there is exchange, incoming strangers and strangeness, contrast, not assimilation or incorporation. accessibility is the opposite of rigidity. accessibility presupposes the willingness to be forever changed.

s5: It’s not just a question of how the voice can be reached, but also where and when the voice can reach (go or do). When is the voice actively accessing? A voice, in the contexts of community and song, can be said to be both accessible (receptive) and accessing (active) in polyphony, which means multiple voices, each voice carving out its own distinct path, weaving through rather than standing out in front of the others. Suspension is a technique for voices to enter a new space. While one voice remains in one position, suspended, other voices shift in a series of steps creating multiple instances of dissonance and tension. Eventually the voices align themselves in a new space where the dissonance is resolved, for the moment, until it resurfaces. Every voice gives and takes. There are no rules about which voice leads the others into a new unexpected space. When it is done well, the result is surprising.

s3: when a voice sends sound and a recipient receives and interprets its message a passage appears.
when the voice moves through the passage, it mutates, transforms and flows into the other. a passage is an access. a crossing, a transit, a ferry ride between two continents. an access is multiple hosts welcoming unexpected gatecrashers. it needs difference, encounter and reverberation for there to be accessibility.

s8: It’s a rainy Friday night in early March when we first meet. Unaware that the pandemic will soon cause us to go into lockdown, the musician turns to the conversation with a gentle focus, asking in a soft voice, “How was your day? Are you hungry?”. An Instagram story about a protest was the first sign she was beginning to find her voice. "Enough was finally enough," she later wrote in an article. She was a hard worker far away on a small ranch, but that does not mean there was not a powerful voice inside! So, how did she do it? “Keep your tongue flat in the back — like, flatten it over the back of your teeth,” she says, her wide eyes narrowing with focus as she observes me. “It’s funny, people are always talking about the voice. It’s the first thing they mention. Second is the turtleneck. But the voice is number one."

s9: There is a voice that is accessible in the fantasies it projects into imagined pasts or futures, in hunger and ambition, in desperation and survival. “Sing for your luncheon and you’ll get dinner. Dine with wine of choice if romance is in your voice.” (Lorenz Hart)

s9: When I don’t believe that I can even sing. 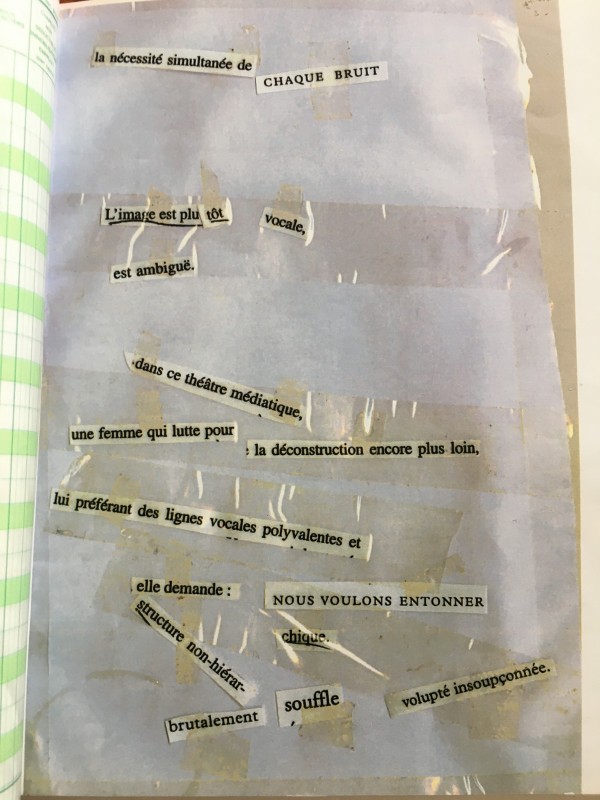 s1: accessibility is about our comfort zones, and some things transcend this diaspora and light up individuals on a more primal level. happiness, laughter, crying / hymns / containers to be moved inside.
s10: When Joe Starkey came along, with his story and his song / He swept our Nelly, off her feet, in that bar, on Boney Street / Here's to Nelly / And here's to Bobby / To every Flooschie / To Joe McStarkey / You have a choice / We have a choice / Through song and sound / We have a voice.

s10: Nelly Loo, sat all alone, in a bar at Central Bone / Thinking of what might have been, had she said yes that evening.

s3: a voice is accessible when it is cared for. when a voice doesn’t need to be a voice. but can be a howl escaping translation.
s3: sometimes you need to learn a different language, a nonverbal language built upon rafts and the movement of water to access a voice far out on the spectrum. sometimes making it accessible doesn’t mean working on the voice but working on the environment around the voice, to allow it to move freely in space so it can give up being identified as a voice and become mere sound, eluding classification.

s1: there are sung voices directly experienced that can transcend borders. felt all over the body of those that catch them. your bones sing too sometimes. i don't know if robots can make this type of noise.

s7: Sound of My Voice human voice sampled altered or pitch-shifted and triggered perceptions of what a music piece could be.

s1: it’s how it activates you.

Banner: Fallon Mayanja, In The Noise Of Being
© Anne Reijiniers
*