PROTESTS IN POLAND: GET THE FUCK OUT, MOTHERFUCKERS

Polish Womxn are really angry. And they have every reason to be. A commentary.

I was born in 1983, late People's Poland, to a Catholic mother, who had the choice of aborting her pregnancy at will if she wanted. It didn't stop her from telling me occasionally, when she was angry with me (I've been a “trouble” child and now a troubled adult), that “she could’ve scratched me off and she didn't” for which I should be thankful. I was an ingrate, though, often fantasising about never being born, and thought how is it even possible to think about the contradictory nature of not being born. As such I try not to contemplate it, despite my neurotic brain jumping on this train of thought in especially dark moments.

I grew up in an atmosphere of Catholic regime, as Poland has been an extremely Catholic country especially since the late 1970s, when the Polish Pope John Paul II was elected. To someone, who never did and will never know what it's like, I will briefly explain how this affects your brain. I've attended holy masses since I was born. I listened to the priest's and family's threats. Sex is dirty and disgusting, having sex before marriage is unacceptable, and pregnancy is sacred obviously, a foetus is alive and abortion is murder. As a child you have no way to defend yourself against it. I remember it vividly, despite abandoning church-going at the age of 15, being around 17, 18 and in Berlin, with friends. So sophisticated, with a cigarette in my lips and a whole Thomas Mann in my little finger, I sat with them in the Rauchhaus squat in Kreuzberg. “Oh yes, and L just left for home in Portugal and had an abortion” - was dropped casually. I remember being mortified. And what, I asked, she didn't feel any remorse? No, I was told. She was happy and relieved. "How come?!”, I remember thinking. I'm shocked when I think about it now. We’ve been consciously brainwashed. I was held to ransom by Catholic emotional blackmail for a very long time. It took a few more years to realise that all it was was casual emotional and economical violence, which led to terrible tragedies, of mothers killing their babies and committing suicides in Poland. 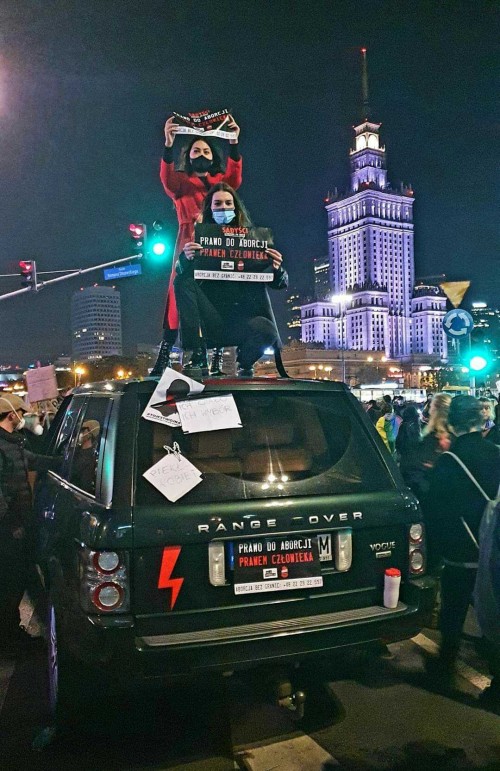 Abortion was legal in Poland until 1993, when the so-called “compromise” between the government and the catholic church was reached, making legal only those terminations resulting from rape,heavy illness of the foetus or endangement of the mother's health. Yes, that was called a compromise. And now, it's a total ban on abortion. Abortion after rape is still possible, but given almost no rape victims go to the police (as they’d have obligation to go to court as well), there’s almost zero rape-effected terminations. On Thursday, October 22nd Polish Constitutional Tribunal agreed to the ban on abortion in case of heavy illnesses of the foetus which would cause an immediate death after birth and foetuses with heavy deformations. We were bombarded with extreme anti-LGBT and anti-abortion propaganda for years. Trucks roam through Polish streets with billboards showing artificial bloodied foetuses and calling women murderers. A lot of people believe it.

"The atmosphere is angry, but jubilant at the same time. There’s techno music, dances, passers-by spontaneously joining, often families with small children. There are spontaneous anti-Catholic church demos happening next to major churches, interrupting Sunday masses all over the country. The latter are especially powerful as blasphemous performances; for many the holy mass still holds a kind of magical power. To disrupt it is to fuck with the accepted order."

Why be born anyway? One could really think about it, as mental illness is skyrocketing (my close circle of friends in Poland is about 90% people with psychiatric or therapeutic history; all are or used to be on antidepressants, natch) among, especially young people in Poland and as life becomes more unbearable with every day in the Law & Justice party and Covid-19-plagues Poland. Is this why, despite the second wave galloping with increasing speed, the catastrophic state of national healthcare, abuse of almost every vulnerable group in this country and the atmosphere of crawling fascism slowly closing in upon our heads, the Tribunal ruling dragged thousands of people on the streets across the country?

As I'm writing these words and since the announcement of the Tribunal’s ruling, there are demos and blockades of streets in all major Polish cities. The atmosphere is angry, but jubilant at the same time. There’s techno music, dances, passers-by spontaneously joining, often families with small children. Dozens of thousands-strong marches are happening everywhere. There are spontaneous anti-Catholic church demos happening next to major churches, interrupting Sunday masses all over the country. The latter are especially powerful as blasphemous performances; for many the holy mass still holds a kind of magical power. To disrupt it is to fuck with the accepted order. The whole center of Warsaw and beyond was entirely paralysed on Monday. Because the ruling party fucked up so much with the COVID-19, they plan on turning the fancy National Stadium into a hospital in the next few days. Right-wing columnists joke already, that soon it will be full of women.

We have no time for these fuckers. Do I believe this is all happening? Not quite yet. Can we win? I’ve been considering having children several times in my life before, still knowing this is false consciousness speaking, this is my mother and father speaking, my aunts, my grandmothers. You’ll regret, they said, again and again. I religiously believed that for years. Part of me still does. But I don’t care anymore. I have decided not to have children in this country or possibly ever. At least not until they will make abortion on demand legal. In the 1970s French women, by the hand of Simone de Beauvoir in Manifesto of the 343, wrote: “I will have a child if I want one, and no moral pressure, institution or economic imperative will compel me to do so. This is my political power. As any kind of producer, I can, while waiting for improvement, put pressure on society through my production (child strike). I will have a child if I want one and if the society I will be bringing it into is suitable for me, if it will not make me a slave to that child, its nurse, its maid, its punchbag.” Yeah, eat that motherfuckers and get the fuck out.