REVIEW: UP AND DOWN - BECLOUDED AT THE TALLINN PRINT TRIENNALE

When the repetition of history is our rough state.

Mini masterpieces are backdropped by the simple elements of dots and dates that connect to one another. Presented at the Tallinn 18th Print Triennale, the artwork Our Rogue State / Extended Latin Alphabet (2015–2021) by Ferenc Gróf grounds the development of humankind culture to the ruins of battlegrounds. It, like many other pieces and feelings present at the Triennale, shaped the timeline and the glorification of the major conflicts on which the history of Western Culture built itself. In front of Our Rogue State I projected myself onto the future. This year would be remembered as the year of another tragic war in Europe in which its time-mark will be drawn by the angel of progress.

Winter breeze suddenly smelt of blood and political interests, in the vicinity of Russia’s invasion in Ukraine. In Tallinn, I learned that the Estonian-Russian border was shaped by the power grabs of the twentieth century. Split between Germanic and Russian influence, Estonia was occupied by the Soviet Union from 1940 until it regained its independence in 1991 and was quickly admitted together with its neighboring baltic countries of Latvia and Lithuania to both the EU and NATO. Just like how the boardgame of Risk is based on strategy and fortunes, spheres of influence, such as the ones that Estonia is subject to, are determined by a polarized world order that is based on international allyship. Parameters of inclusion and exclusion stay anchored to their replication of colonial logics. Time once again fakes its progression.

The Triennale, titled WARM: Checking Temperature in Three Acts, curated by a roster of artists from Baltic and Eastern European countries selected by curator Róna Kopeczky, sadly felt very timely. The premises of the Triennale were that of being a critical and aesthetical thermometer of the political, cultural and social turns that affect the body politic of Central and Eastern European nationstates. Far-right politics, globally misplaced priorities, the collapse of democracies and the shrinking of freedom were all intertwined by a silver thread of irony and sarcasm that unfolded in its three chapters: Nations Love it, Pickle Politics and The Science of Freedom. Pinches of absurdity that attempt to spice up every discourse seem like a hopeless attempt to heal a chronic disease by applying a bit of fermented juice; a feeling I had whilst sitting at the Slavs and Tatars Pickle Bar (2016- ongoing) installation where the entertainment was offered by the folklore of the small quantity of the sour traditional pickle beverages. 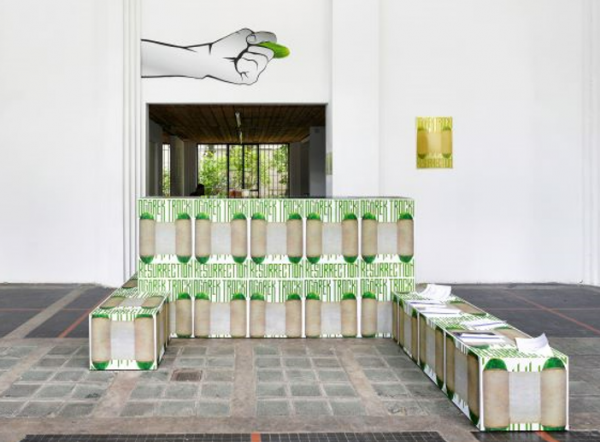 Tallinn reminded me of an introverted kid in a classroom that tries their best to blend in and be liked, it is a festivity of imagined European standards that open their doors to the recent waves of globalization. The city itself is a small conglomerate of buildings whose historical center is circumscribed in medieval stone walls. Its modern bits extend to the shores of the Baltic Sea in which Scandinavian companies trace the flows of prosperous gentrification across its popular Soviet neighborhoods. Just near the sea and bordering the wealth triumph rises the imposing graffiti-hornated wreck of the Linnahall, a sprawling ziggurat-like complex that was designed to host the Olympic regatta competition in 1980. It has been abandoned ever since. Misplaced financial investments are manifested in front of its beautiful skeleton that remains visibly hidden in the closet of broken dreams of wealth and opulence.

Contrary to the signs of rapacious capitalism that permeated my first impression of the Estonian capital, the local art scene that unfolded in front me set a positive example of cultural fairness. Placed right in the city center, the oldest center for contemporary art in the country which was founded in 1992 is more than just an exhibition space- it functions as a support network and database for artists and cultural practitioners, creating opportunities and collaborations. Representing the center, Kaarin Kivirahk revealed that since 2015 the Estonian Minister of Culture pays a salary to a selected group of artists and writers. It’s a basic income that is equated with the national median wage alongside with all the social benefits of those that are not represented by national institutions. Scarcity and distribution of funds are not a question of borders, but a well planned economic policy.

Trotting from the city center to the seaside, I found the Temnikova & Kasela gallery. The gallery space was transformed into a Room for Restoring Empathy by a sewing workshop conducted by the artist Eva Koťátková and involves children from diasporic backgrounds. Through the collaborative process of creating funny costumes that break down ethnic and racial differences, the artist softly inquired on and requested empathy. But in the sterile white cube, goofy costumes are not animated by any interaction and their potential criticality are depicted as colorful corpses. Now, still thinking about empathy, I wonder if the embargo on Russian oil or the expulsion of Starbucks and McDonalds from the Russian market equates with the emphatic gestures of future generations. Maybe it’s best that you don’t tell me about empathy. 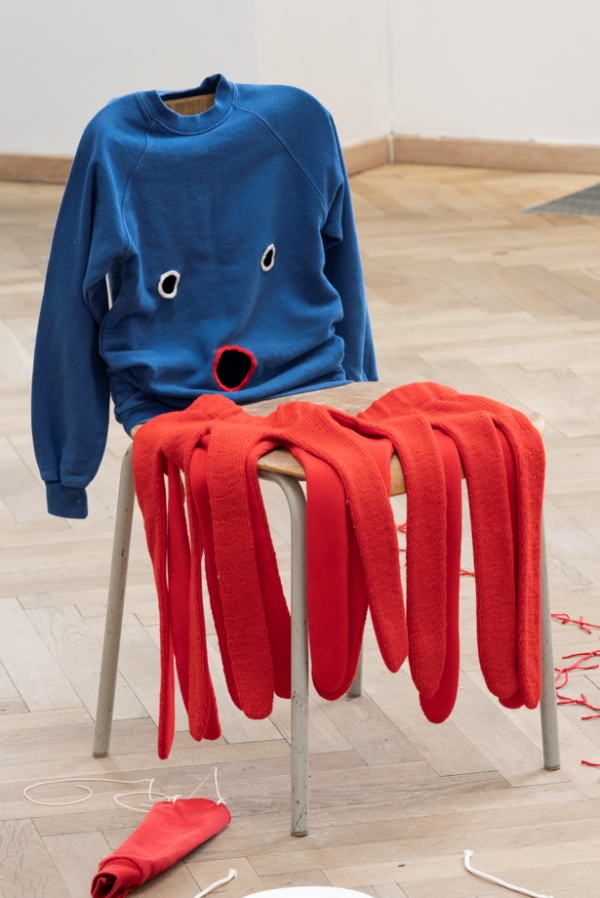 Another venue of the Triennale was the Flo Kasearu House Museum that was instituted as a gesture of care for the memory of the past and the struggles of the present. There, the artist Flo Kasearu guided me through the vicissitudes of the building and its current state. It is an example of history condensed by its walls and imagination. The house that was built over a decade ago by Kasearu’s grandparents became a state property under Soviet rule. It was only twenty years after the collapse of the Soviet Union that the house was restored to Kasearu. This historic tale peaks with the transformation of the house into a well rounded museum where Kaseasu displays her work alongside the objects of her daily life. Exercising the trauma of separation, Kasearu inquires about the responsibilities of being a landlord and an artist in unsettling times. Everything is kept close to her. Not many familial objects and goods are spared in order to trace back and reconstruct an identity.

History keeps repeating itself. This supposedly unimaginable war is the reason why millions seek refuge in the cracked heart of a Europe that neutralizes foreign bodies with the help of racist legislation. A broken country is a new reality for many, while the urgency of sheltering is an ongoing tragedy for others. At the Kai Art Center, the artist Jasmina Cibic created a space of experimentation. Spielraum – The Nation Loves It (2015), is composed by a series of curtains whose patterns are repeated in her own outfit. In the video part of the installation, Cibic performs within the fabricated environment and asks questions concerning the institutions of power that shape ideologies as well as their grassroot counterparts. Collective memories adorn her own narrative that she embodied in the process of historification. Looking at her ideological outfit, the image of protestants wrapped in the bi-coloured Ukraine flag flashed in front of my eyes. Tonalities of identities are all of a sudden stripped from any complexities by the brute force of nationalism and familiar tropes of political patterns. How long will it take for us to identify those patterns, and will it happen before we are reduced to our basic pride? 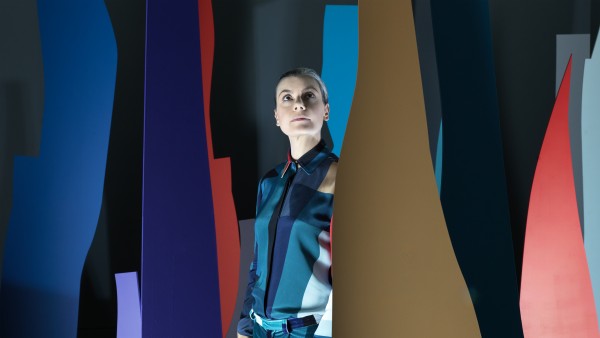 My last dinner in Tallinn was in a tacky Japanese restaurant. I couldn’t find any Estonian food and I felt stuck in an interregnum. The illusion of change was devoured by the impossibility of encountering something new to the anguish of uncertainty.