Dirimart is thrilled to present İnci Eviner’s first solo exhibition at the gallery titled Houris and Travelers. The exhibition brings together the artist’s two-channel video installation Reenactment of Heaven (2018), which was previously displayed at the Liverpool Biennial and will be exhibited in Turkey for the first time, and her new installation of ceramic sculptures titled Travelers (2022) in a format that allows the visitors to experience the works on display by wandering around them. Eviner, who tackles the body both as a space of liberation and a field of research, traces the operation of the authority’s body politics and its invisible effects on us. In a constant effort to break free of the meanings and symbols it is laden with, the body itself becomes a battlefield in Eviner’s videos. It turns into figures that erode the hierarchies of representation and embody both the realities and the imaginary oddities. All of these figures materialize in the drawings that the artist places at the center of her practice as her way of thinking. Blended with the visual vocabulary she has created over the years, these drawings evolve into photographs, installations, canvases, sculptures, moving pictures and become a new, multidimensional entity that is articulated to every production of the artist. Eviner ponders the gaps between the image and meaning, the meaning and the word. The moving pictures of the image, the word, the text, and the movement, which she produces to carve holes in these gaps, are assembled in an arhythmical repetition to break the boundaries called identity; by constantly exploring different potentials to make room for the unexpected, she presents a choreography at the verge of improvisation. The artist is curious about the strategies and tactics employed by the cumulative discourses that the authority relentlessly builds upon traditions and our ways of life to steer our emotions and thoughts. Contemplating how belief system and economy work hand in hand, Eviner creates her video Reenactment of Heaven where two earthly and heavenly scenes and flows are superposed over one another. On the upper part of the video, she has us watch Istanbul’s familiar urban landscape from a rooftop, casting a panoramic gaze at the time rolling between sunrise and sunset. Meanwhile, on the fixed lower part of the video, we watch the “houris” moving in a timeless, eternal order. Through this work, the artist sets out to explore the political interaction of promises, sins, atonements, and seductions, in between mundaneness and religious fantasies.

In the installation Travelers, we come across another plane where human-animal hybrid creatures that resemble mythological characters are placed in a manner that alludes to human mobility. Here the artist refers to the political, cultural, economic, and faith related intersections of macro and micro scale community movements such as caravans, hegira, pilgrimage, transit passages, migrations, ceremonies, parades, and pride marches. The work that focuses on mass movement as a human concept independent of geography and historical periods is woven with extant ancient iconography and the tachiste gestures characteristic of Eviner’s drawings and paintings. 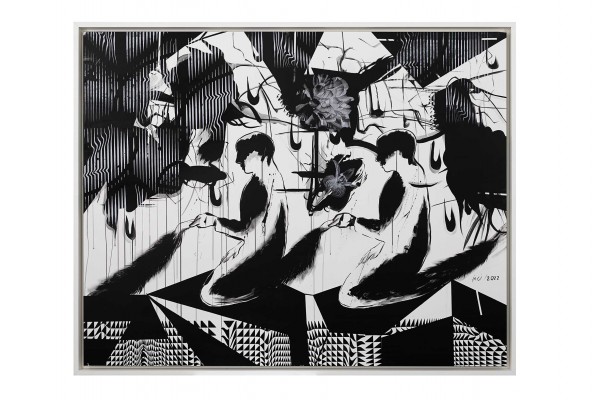